If you need a sure fire dish to serve at your next cookout, our recipe for Loaded Baked Potato Casserole will definitely be a hit. With tasty baked potato flesh mixed with cream cheese and topped with shredded cheese, sour cream and bacon, this recipe is sure to please.

Baked potatoes are amazing. These root vegetables bake up light and fluffy, and when you add some salt, butter, and sour cream, they get even better. Pretty much everyone loves the basic baked potato. While baked potatoes are wonderful just on their own, their mild flavor profile begs to be embellished. Many people add all kinds of toppings to their baked potatoes, from barbeque to onions to bacon. 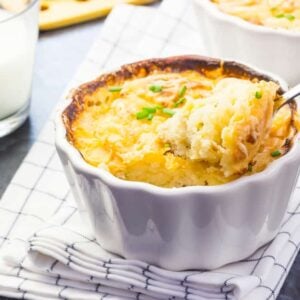 April Freeman
If you are looking for a delicious casserole that is the perfect side item for your cookout, this recipe for Loaded Baked Potato Casserole will bring rave reviews. Featuring delicious baked potatoes, sour cream, cheese, and bacon, this casserole is delicious and will be enjoyed by everyone at the party.
Print Recipe Pin Recipe Add to Collection Go to Collections
Prep Time 30 mins
Baking Time 1 hr 30 mins
Total Time 2 hrs
Cuisine American
Servings 10 Servings

Loaded baked potatoes are not difficult to make. Anyone who wants to take the time to scoop out the potato flesh, stir it together with other ingredients, and stuff the potato skins can make this yummy side dish. However, if you are serving more than three or four people, the preparation time for loaded baked potatoes starts to add up. If you are cooking for several families, like for a cookout, this dish will take quite a while to create. However, if you like loaded baked potatoes, and you want to make them in a simpler form, you can use our recipe for Loaded Baked Potato Casserole. This recipe has all the flavor and texture of a loaded baked potato, but the preparation time is vastly simplified. The flesh is prepared similarly to how you make them for loaded potatoes, but with our recipe, you simply spread the mixture in a greased casserole dish instead of stuffing it back into the potato shells. The casserole is spooned onto plates as a great side dish for steaks, chops, ribs, or burgers. This recipe is great because you can make it up to 24 or 36 hours before when you want to serve it. Simply prepare the recipe as directed, but before you put the casserole in the oven for the final baking, just cover the dish with aluminum foil and pop it in the fridge. About 30 minutes before you want to eat, take the foil off of the dish and bake it as directed.
Keyword Loaded Baked Potato Casserole, Recipe, Side Dish