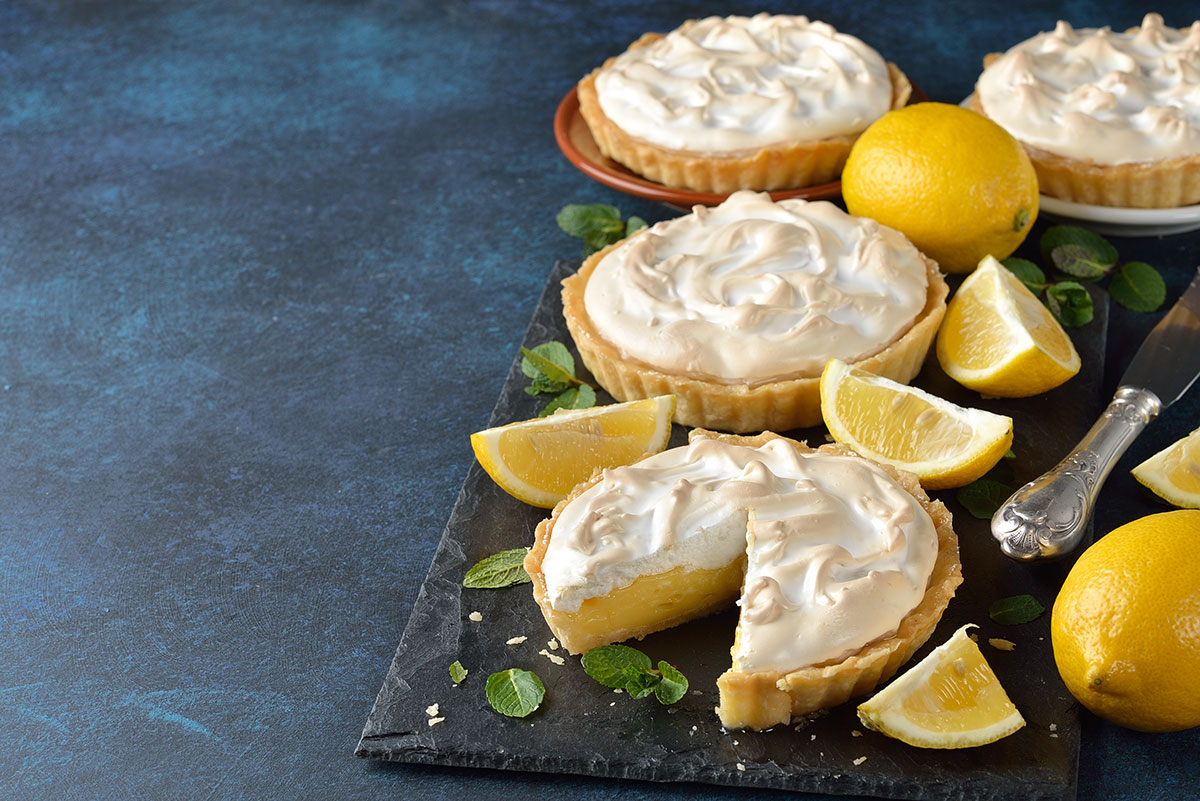 When I was a child, any celebration was always accompanied by Eagle Brand® lemon meringue pie.  It was easy, it wasn’t too sweet, and we all loved it.  To this day and to the next generation, it is still the go-to dessert in my family.

Lemon pie is generally considered as American as apple pie and is believed to have been developed in Quaker Philadelphia by Elizabeth Goodwell in the early 19th century. Certainly, Mrs. Goodwell made it a big seller in her pastry shop.

Lemon curd, in a form very different from today’s version, was developed in England during the 18th century by Quakers and immigrated along with them to America. Mrs. Goodwell, a Quaker, ran a pastry shop where one of her more popular offerings was a tart filled with lemon custard. Local legend says that using so many egg yolks for her custards, she decided to make a meringue for the top. Thus, the famous dessert was born.

The pie became popular across America, especially after a former student of Mrs. Goodwell’s, Eliza Leslie, added it to her Directions for Cookery, published in 1837. Leslie’s book became a best seller and stayed in print until 1890. 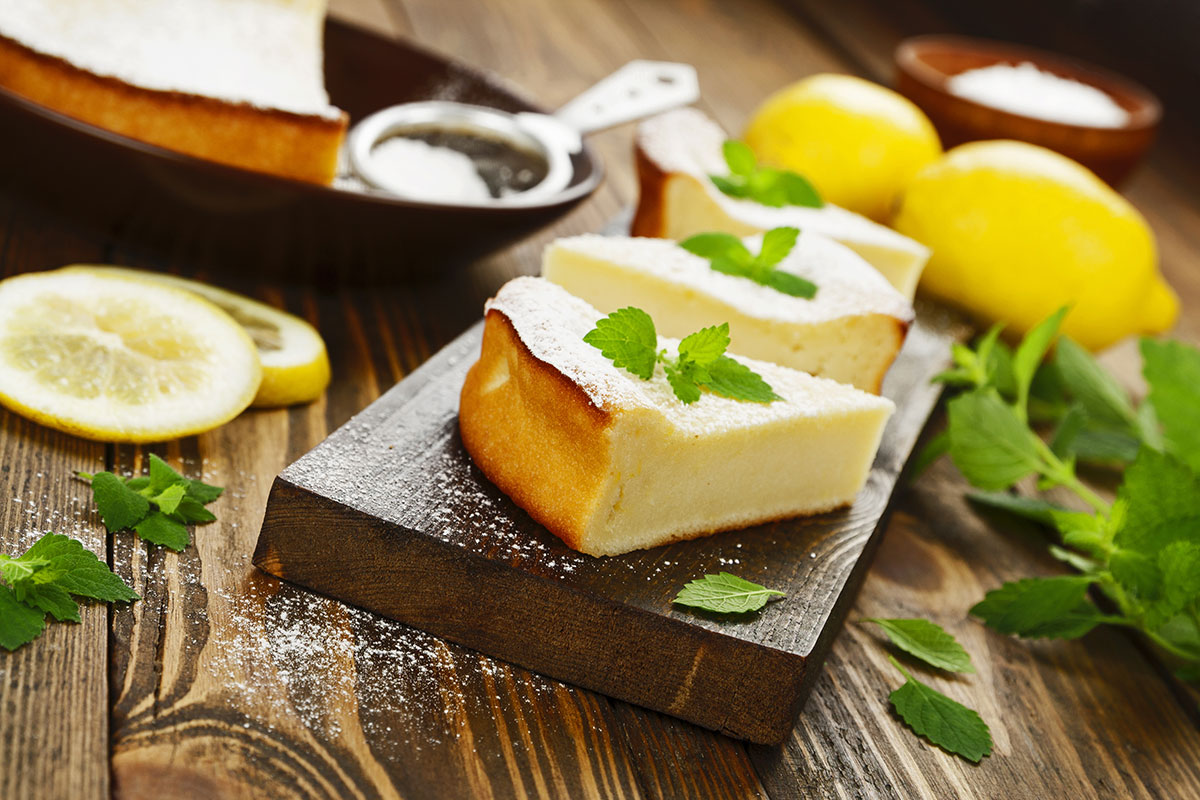 Meanwhile, in Los Angeles in 1926, Monroe Boston Strause, the Pie King, created an alternative to the lemon custard, introducing the light and delicate lemon chiffon pie. Originally composed of beaten egg whites folded into a cornstarch-thickened lemon liquid.  Strause is also responsible for the domed meringue and the graham cracker crust.

The latter is in some ways more important than the Chiffon filling.  Graham cracker crusts, which can be purchased already made now, are simple and used with many different desserts.

Made with a mixture of crushed graham crackers, butter, and, in some cases, sugar, the crust is pressed into the pie pan and pre-baked to a crunchy goodness.  Please note, any leftovers that don’t go into the pie pan are quite tasty as is and make a nice reward for the hard work of making your own crust.

This virtually impossible to fail with crust became a staple in American pie making, serving as the base for key lime pie and most forms of cheesecake and dozens of recipes, including a S’mores cream pie,  You can buy them pre-made, but I find these to be too sweet.  In fact, even though most graham cracker crust recipes call for added sugar, I always leave it out of my crusts.

Finally, in the 1940s, Eagle Brand® Condensed Milk introduced its Lemon Icebox Pie.  Based on condensed milk, which is pre-cooked and pre-sweetened, the Eagle Brand® no-bake lemon pie uses just a few ingredients and is baked only long enough to brown its meringue. Referring to itself as magic, Eagle Brand® touts itself as not just a product, but as a method of banking.

A treasure trove of desserts from the 1940s and 1950s are based on this product, first made in 1856 as an easy way to distribute milk and sugar in an era without refrigeration.  Although milk is used as a base for ice creams, pumpkin pie, and fudge, the Eagle Brand® lemon cream pies are probably among the most enduring legacies of that dessert era. 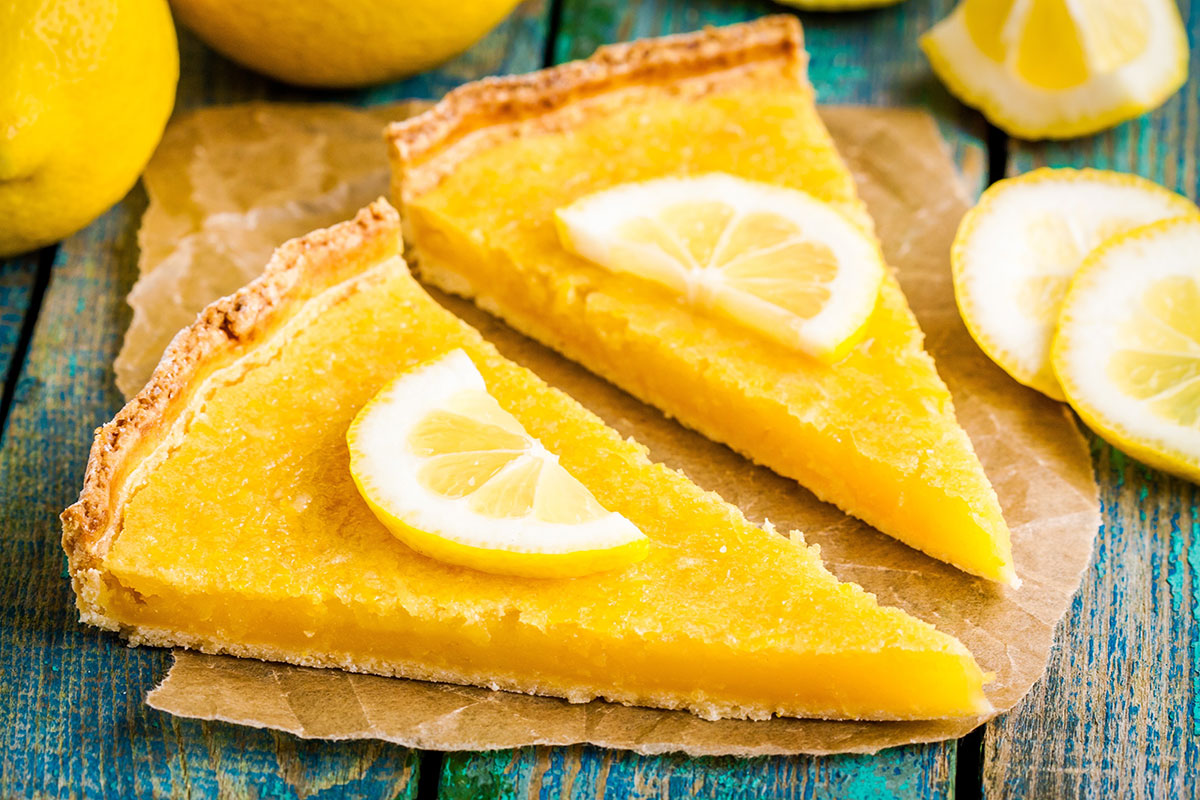 There are basically two types of lemon pie and the not-to-be-forgotten lemon curd tart. Another potential candidate is the lemon almond tart, although it strays pretty far from a basic lemon pie.  Lemon bars, with a lemony custard filling, are yet another form of lemon dessert.

But the lemon meringue pie is probably the most popular and well-known American lemon dessert.

My family tradition is to make the Eagle Brand® pie, and call it lemon meringue pie, even though we leave the meringue off because we all hate it. Really, we’d probably eat it without the crust if that weren’t so embarrassingly greedy. Let’s take a closer look at these various lemon pies and pie-like desserts. 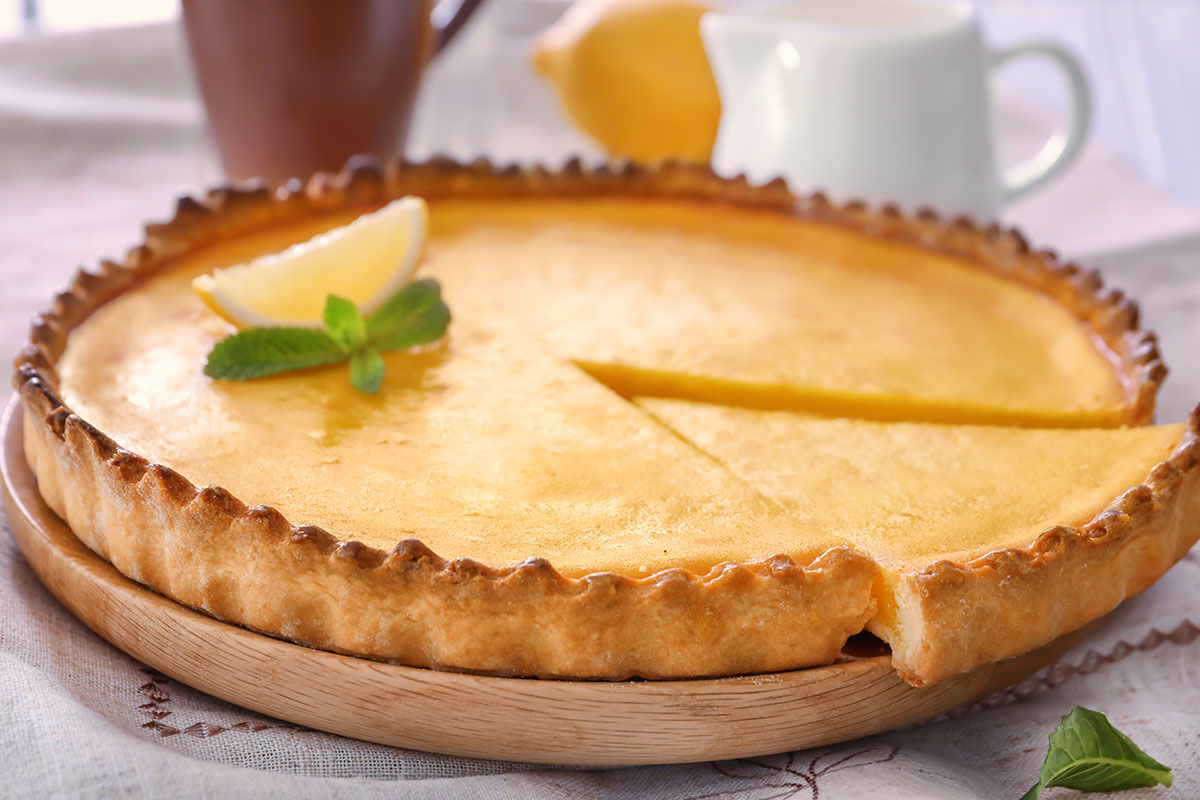 Lemon curd is an English-style custard-like condiment used like jam for spreading on baked goods at high tea.  It has a much stronger lemon taste than a lemon custard with a smooth and creamy texture.  The curd is thick enough to spread on scones and muffins.  It is also referred to, probably not so fortunate, as lemon cheese.

Lemon curd is traditionally made with the zest and juice of Meyer lemons, a hybrid of lemons and some form of orange that is sweeter than traditional lemons.  Ina Garten, the Food Network’s Barefoot Contessa, offers a classic lemon curd tart recipe made with a traditional butter pastry crust.  Using the juice of four lemons and four extra-large eggs and a lot of sugar, she makes a delicious creamy curd tart.

The butter and sugar are creamed together with zest from the lemons.  The eggs are then added one at a time and finally the lemon juice.  The curd mixture is next cooked until it thickens.  The warm liquid is poured into the prepared crust and allowed to cool to room temp.

Unlike the Eagle Brand® filling, the curd has no milk, and unlike the chiffon pie, it has no cornstarch and is custardy.  In the end, the curd is more lemony and the custard is lighter, with the chiffon lightest of all.

By the way, lemon curd is called lemon curd because it was originally made by acidulating cream to form curds that separate from the whey in milk and then drained through cheesecloth.  This is similar to making cottage cheese.

Lemon curd, in a tart or otherwise, is a specialty product in the United States.  If not made from scratch, it is easiest to purchase in stores specializing in imported British grocery goods. 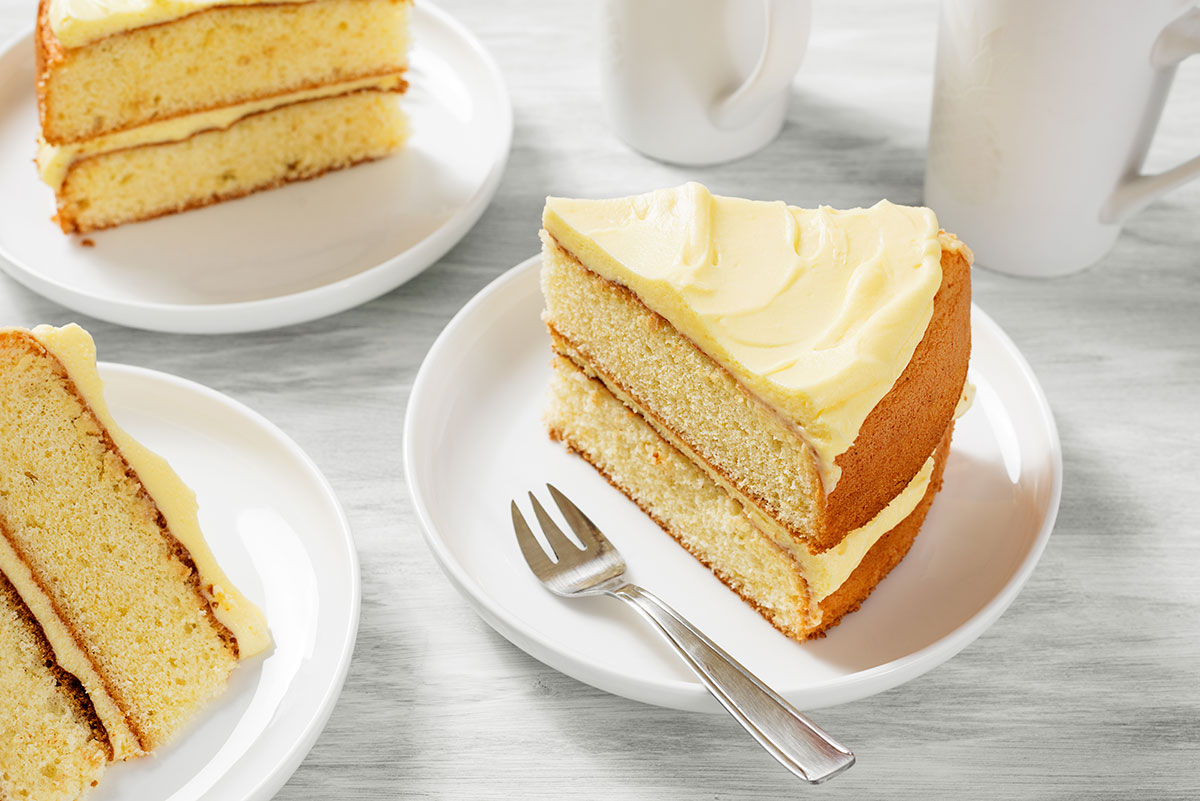 Okay, I’ll admit it, I really, really don’t like lemon chiffon pie.  It has a light and airy – and some would say rubbery – filling that lacks the creamy comforting goodness of custard and is topped with mile-high meringue, which I don’t even like on a custard pie.  Still, for many people, lemon chiffon filling is their favorite and it is seen far more often in restaurants than the custard versions.

The chiffon-filled lemon meringue pie was officially developed by Strause as a lemon pie featuring stiffly beaten egg whites and a cornstarch thickened cream. Cornstarch (or cornflour) had appeared in a lot of earlier lemon pie recipes, but the earlier recipes were essentially custards heavy with egg yolks. Strause found the yolk-heavy recipes offensive due to a childhood overeating experience and wanted something lighter.

Strause was delighted with his Chiffon Pie (named by his mother), later described in the New York Herald Tribune as standing up “like a soldier on parade.”

Today, most lemon chiffon pies include gelatin, which makes the pie set a lot more easily. It includes lemon juice, gelatin, sugar, and eggs as the main ingredients and is usually made with a traditional pastry crust. Made rather like a mousse, with stiffly beaten egg whites folded in, the filling is light and fluffy.

For most people, lemon chiffon pie is the rather rubbery horrible stuff that’s been sitting on the diner pie shelf for days now without spoiling or melting.  Making it at home is a far better way to experience it. 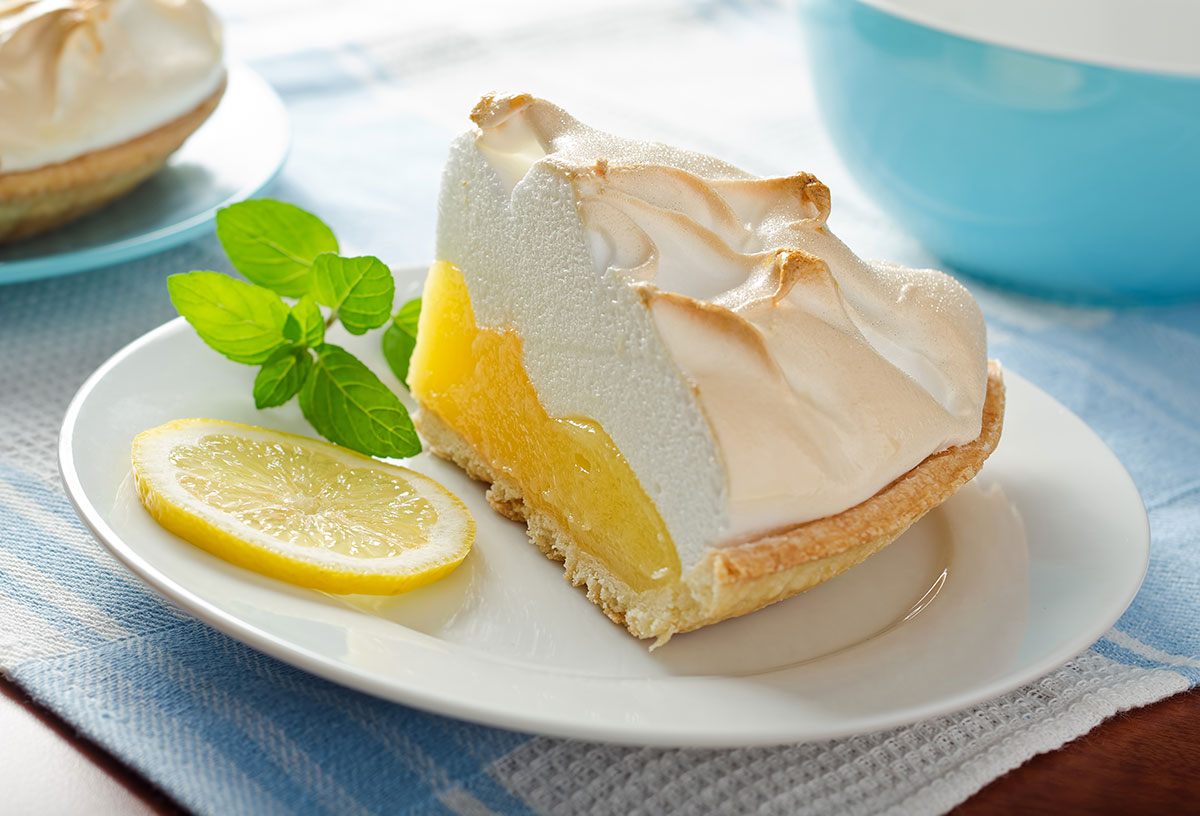 Lemon meringue pie, made with lemon custard, has long been a staple dessert on both sides of the Atlantic. Mrs. Beeton’s Book of Household Management, published in 1861, featured her recipe made with a cornflour-based custard that is called a curd. The curd uses six egg yolks added to a cornstarch and sugar base.

It is topped with a stiff, lightly sweetened meringue.  Juia Child, on the other hand, uses only four egg yolks and a much sweeter meringue.  Finally, the Betty Crocker Cookbook reduces the egg yolks to three, uses a lot of water and cornstarch, and makes a very sweet meringue to which cream of tartar (for stability) and vanilla are added. 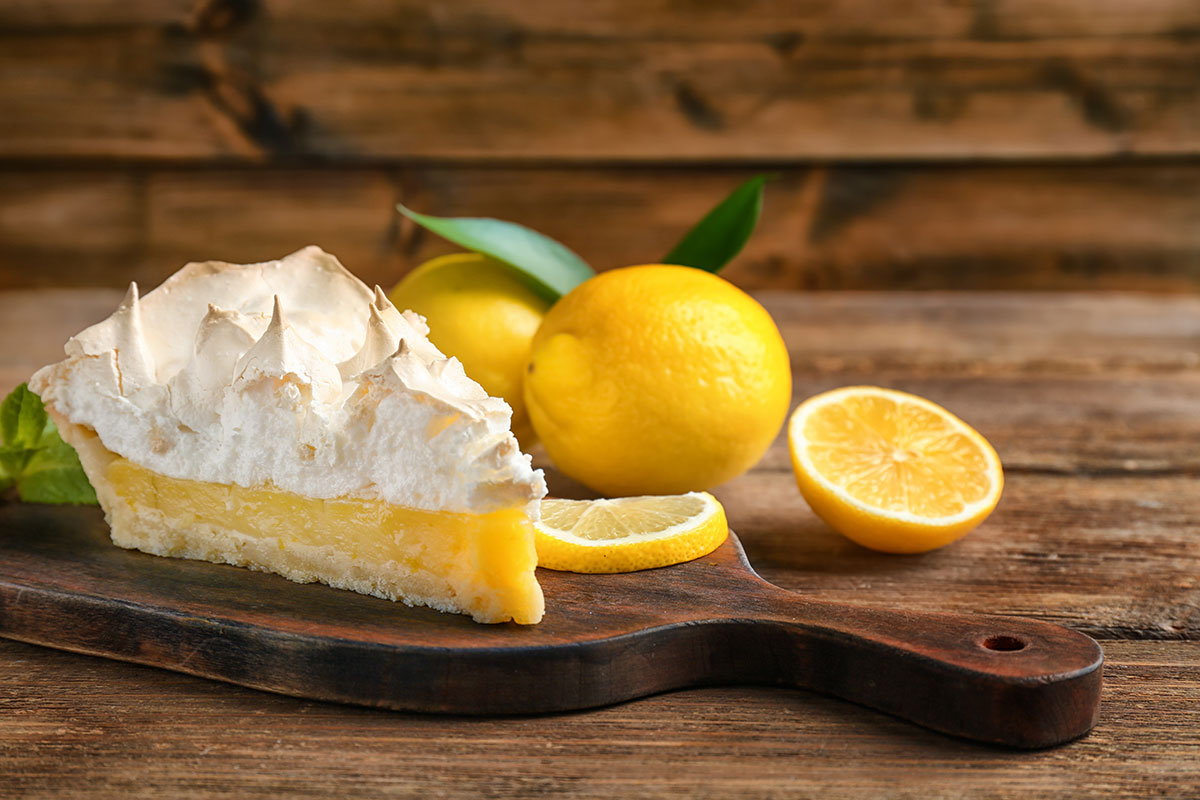 The overall winner for me is the Eagle Brand® no-bake.  It is simple, use one can of milk, 3 egg yolks, 1/2 cup of lemon juice, and lemon zest.  Put all the ingredients in a bowl, mix them, pour them into your favorite prepared crust, and top.  Put it in the fridge and gobble it down later.

This pie has an intense lemon flavor and, with a buttery, crunchy graham cracker crust isn’t too sweet.  Even if you hate meringue as I do, it’s worth making because it keeps the pie fresh longer and looks really pretty if well done.  Some people use whipped cream or whipped topping instead of the meringue.

By the way, lemon meringue pie has a delicious cousin made with key limes and topped with whipped cream. You can do that in several ways too, but the best is to make it with Eagle Brand®.

So, now I’m going to hunt through my pantry for a can of Eagle Brand® and some graham crackers.  You might want to do the same.