A favorite kind of pie for about 200 years, Lemon Meringue Pie is tangy, sweet, and topped with a fluffy, delicious meringue topping. There's a reason this recipe is popular, because it is both beautiful and delicious. Why not give it a try with our easy-to-follow recipe?

In the early 1800s, a Philadelphia woman named Elizabeth Goodfellow started America’s first cooking school. She had a classic recipe for lemon pudding which used ten egg yolks. At some point, to avoid the wasting of the egg whites, Ms. Goodfellow decided to top her lemon pudding with a lovely meringue topping, and Lemon Meringue Pie was invented. By the 1860s, many cookbooks featured recipes for Lemon Meringue Pie, and it’s been a favorite of many ever since. 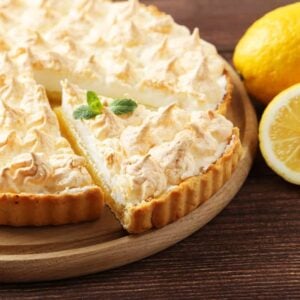 April Freeman
With a tangy, sweet filling topped with mounds of fluffy, melt in your mouth meringue, our recipe for Lemon Meringue Pie is second to none. While this recipe might seem like one that is complicated, it actually isn’t too hard. Just take your time and follow the instructions below.
Print Recipe Pin Recipe Add to Collection Go to Collections
Prep Time 40 mins
Baking Time 20 mins
Total Time 1 hr
Cuisine American
Servings 10 Servings