If you love a tasty, crunchy pickle, you may want to try your hand at creating your own batch of Kosher Dill Pickles. While this process sounds complicated, it actually is fairly straightforward and simple. In about an hour, you can create delicious pickles for your family to enjoy.

You may wonder what is the difference between kosher dill pickles and ordinary dill pickles. Most people know that the term “kosher” describes foods that are permitted for individuals who are Jewish. While, yes, these pickles are allowed under Jewish dietary laws, that actually isn’t the reason that these pickles are labeled as kosher. Many New York delis that served the Jewish population also served pickles that they made in a unique way.

Of course, pickling on the North American continent was not necessarily a new thing in the late 1800s and early 1900s. At the establishment of the first European colonies, pickling recipes were common. However, many of the English, German, and French colonists pickled things like sauerkraut and sweet pickles. However, around the turn of the century, Jewish immigrants from places like Ukraine, Poland, and Lithuania entered many big cities like New York City. 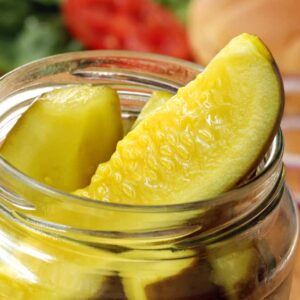 April Freeman
Crunchy, salty, and a little sour, kosher dill pickles are great to add that perfect touch to a hamburger or a sub sandwich. Alternately, when you make whole pickles, kosher dills are perfect for an afternoon snack. Many people just buy a jar of these delicious condiments when they are out at the local grocery store. However, did you know that making homemade kosher dill pickles isn’t all that complicated? With our easy-to-follow recipe, you can whip up a batch in your own kitchen.
Print Recipe Pin Recipe Add to Collection Go to Collections
Cuisine American
Servings 5 Jars

Ingredients for Each Quart of Pickles

If you have never made pickles before, you may not realize that the typical cucumbers that you might slice for snacking will not work for making kosher dill pickles. The slicing version of cucumbers will not hold up to the heat of processing and will get soft. Of course, we all know that soft pickles are unappealing because some of the fun of eating a pickle is that satisfying crunch as you bite into it. To make pickles, you can buy special “pickling cucumbers.” These cukes keep their firmness throughout the heat of processing. You might find these at your local grocery store, but more likely, you will find them at a local farmer’s market in the summer.  If you are into gardening, growing two or three pickling cucumber plants is an easy and inexpensive way of getting cucumbers for your homemade kosher dill pickles. While you are at it, you may want to grow some dill as well, and you can use this for seasoning the brine. If you have never canned any kind of vegetable before, there are a few things that you must remember. First, cleanliness is a big deal in canning. Your jars, your lids, and your jar rings need to be scrupulously clean. Second, only use jars and lids that are labeled for home canning. Recycling jars from manufactured products may not work very well, since canning jars are specifically designed to hold up to the home canning process. You can re-use canning jars and the rings that hold the lids on the jars, but you should always buy new lids. The sealing compound may not hold up for another round of canning, so to be safe, discard the lids after you open your jars.
Keyword Dinner Recipe, Kosher Dill Pickles, Side Dish