A kind of cross between pecan pie and chocolate chip cookies, our recipe for Kentucky Derby Pie is a regional delight that is the perfect way to wrap up an evening meal. Top a slice of our pie with whipped cream or ice cream for a real treat.

The name “derby pie” is actually protected by a trademark. The Kern family filed a copyright for the name and have been known to try to sue others who attempt to use the hyphenated title that they trademarked. Other inns, restaurants, and bakeries have received “cease and desist” letters from the Kern family when others try to market a “derby-pie.”

This is probably why pies similar to this are generally titled “Kentucky Derby Pie.” If you’re touring Kentucky and do not see a derby pie on a restaurant menu, simply peruse the item descriptions. If you come across a slice of pie with pecans, chocolate chips, and bourbon, you will be enjoying the equivalent of a derby pie. 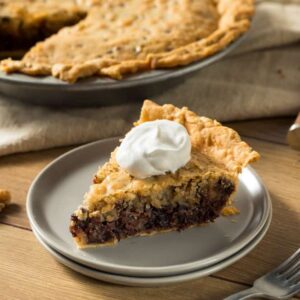 April Freeman
While the name of this pie might bring to mind a famous annual horse race, this recipe actually has nothing to do with the Kentucky Derby. Created in the 1950s, a recipe similar to the one below was created by the Kern family matriarch at the Melrose Inn in the town of Prospect, Kentucky. Their recipe featured walnuts and a few tablespoons of Kentucky bourbon. They called the dessert “derby-pie” choosing the name when various family members tossed name suggestions into a hat.
Print Recipe Pin Recipe Add to Collection Go to Collections
Prep Time 25 mins
Baking Time 45 mins
Total Time 1 hr 10 mins
Cuisine American
Servings 8 Slices

This pie is something like a chocolate chip cookie inside a pastry crust. It is delicious and crunchy with a rich sweetness that is perfectly offset by whipped cream or ice cream.  Our pie filling recipe is not intended to fill a large, deep dish pie pan. For this recipe, you need a standard, nine inch pie pan. You probably shouldn’t double it to fill a deep dish pan either. When you create a deeper pie, you have to bake it longer to allow the pie to set up. This extended baking time will scorch your chocolate chips. Stick to the standard recipe to have the best results in this recipe.  We call for pecans in our recipe, but if you do not have them on hand, you can substitute another kind of nuts if you desire. Walnuts are sublime in this recipe, and coarsely chopped almonds are tasty too.
Keyword Dessert, Dinner Recipe, Kentucky Derby Pie