Check out our detailed comparison between kefir and kombucha. See which of these probiotic drinks has the most culture and health benefits in this fermented beverage face-off. 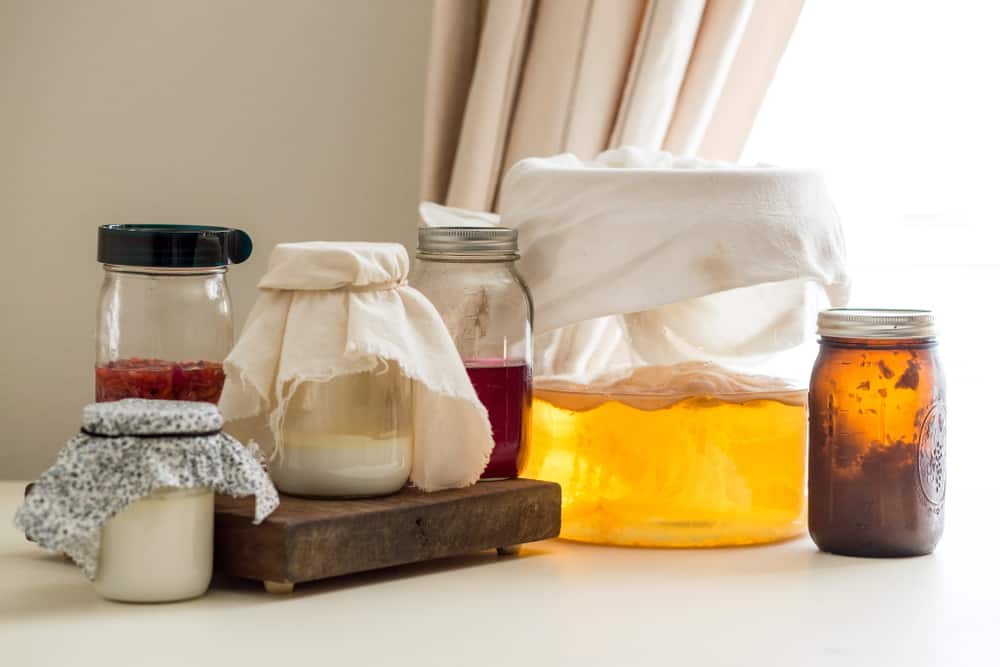 The importance of good gut health is all the rage in the natural health community. Since there are ten times as many bacteria in your body as there are human cells, it would be wise to keep these little bugs happy! If your gut is in a rut, you may want to consider a fermented beverage.

Kefir and kombucha are fermented drinks that are rich in probiotics and nutrients. These drinks both stimulate digestion and inoculate the gut with beneficial bacteria. As functional foods, fermented beverages have benefits beyond nutritional value.

In today’s world, gut health plays a pivotal role in overall wellbeing and vitality. Is it worth adding fermented drinks to your daily health regimen? Should you be sipping on kefir or kombucha? Which drink will benefit your gut the most?

Comparing the two probiotic heavyweights will reveal which has the most culture and holds the key to good gut health. 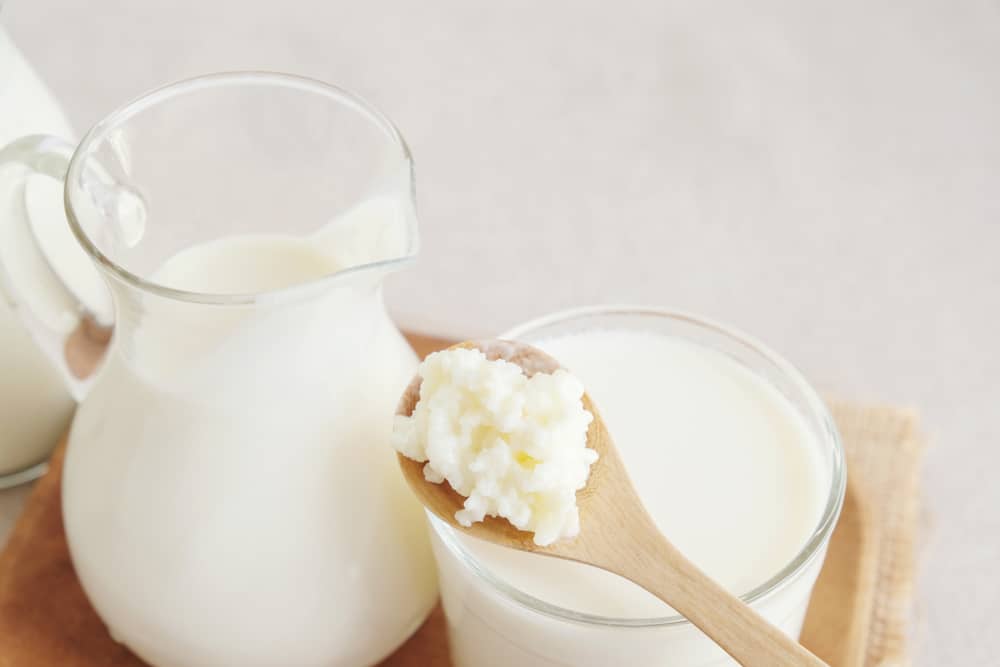 Kefir is a fermented drink traditionally made with dairy milk, although vegan options are available such as coconut water and plant-based milk.

A probiotic and nutrient-rich drink is created by fermenting milk or water with kefir grains (tiny colonies of bacteria and yeast). Kefir is left to ferment at room temperature for 1-3 days before consumption. 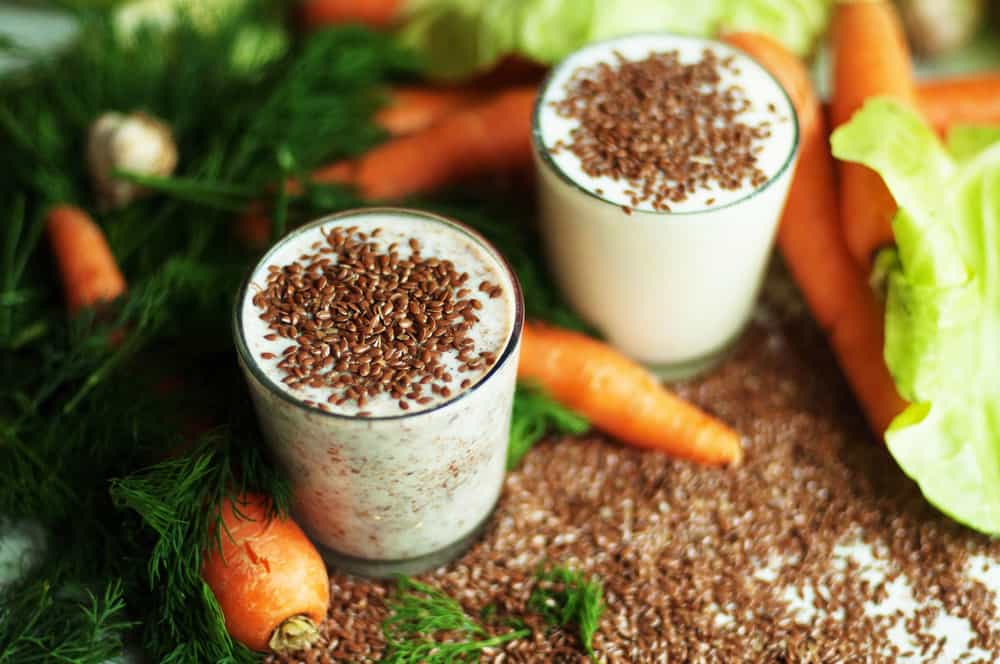 A creamy texture complements the tangy and slightly sour flavor of milk kefir. It is similar to Greek yogurt but with a thinner consistency.

Water kefir is sweet, slightly tart and fizzy. You can compare this refreshing drink to soda, only more nutritious and without the excess sugar!

Kefir is usually flavored with a delicious blend of fruit or vegetable juice and spices.

The History Of Kefir

Traditional kefir is thought to have its roots in the Caucasus Mountains of Eastern Europe. It was made by combining kefir grains and fresh milk, which was left to ferment in goatskin bags. Kefir has been used for centuries in Russia, Georgia, Turkey and Central Asia.

In the early 1900s, Dr. Ilya Ilyich Metchnikoff (a Russian Nobel prizewinner and immunologist) completed research that confirmed that kefir was one of the keys to the extraordinary longevity of the Caucasus population.

Following Metchnikoff’s discovery, the All-Russian Physicians’ Society made it their mission to obtain the kefir grains from the tribes of Caucasus (who were highly reluctant to share their beloved secret) to produce and use kefir as medicine in hospitals.

Kefir gained popularity in the west by the 1960s and is considered a superfood for the gut and longevity to this day.

Cultures For Health has a step-by-step video tutorial for homemade water kefir.

The Potential Health and Nutritional Benefits Of Kefir 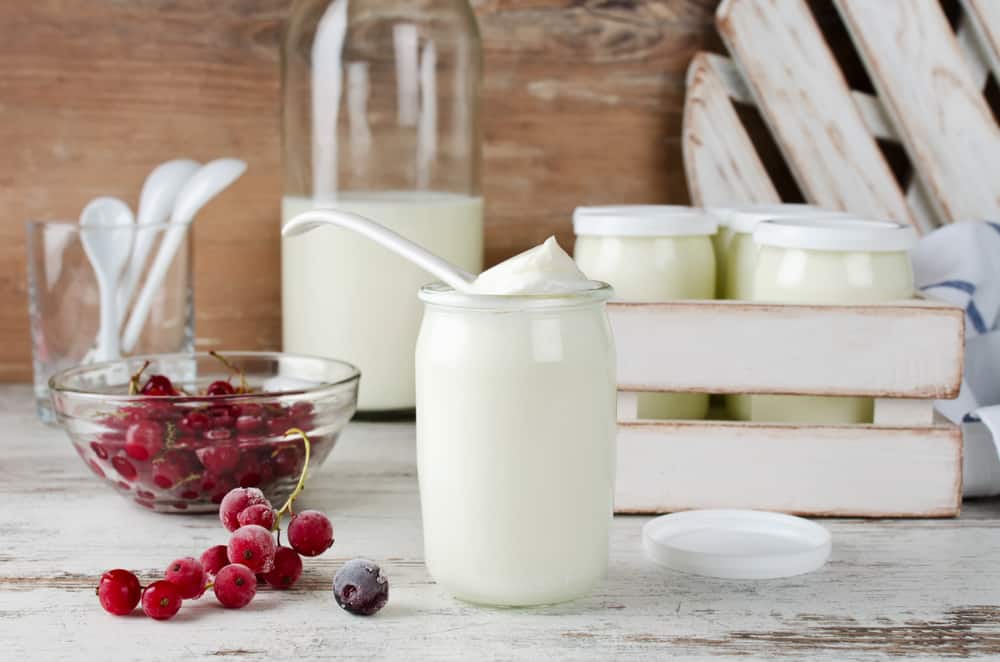 See also  How to Store Limes (Including the Peels)

The Possible Drawbacks Of Kefir

5 Ways To Use Kefir 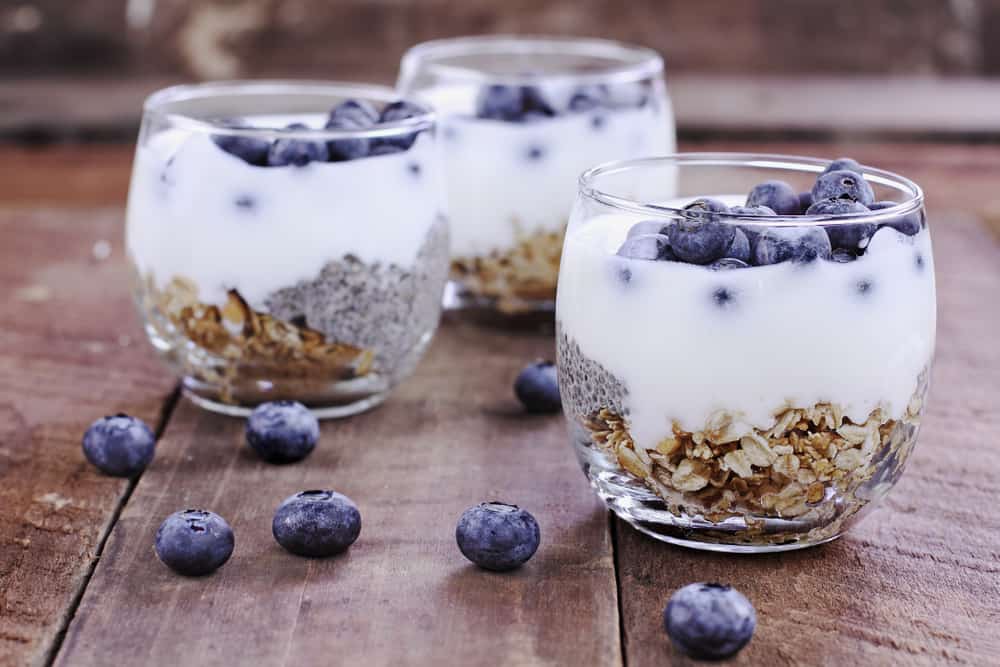 Kombucha is a fermented, probiotic beverage made with tea, sugar and a starter culture known as a scoby.

How Kombucha Is Made 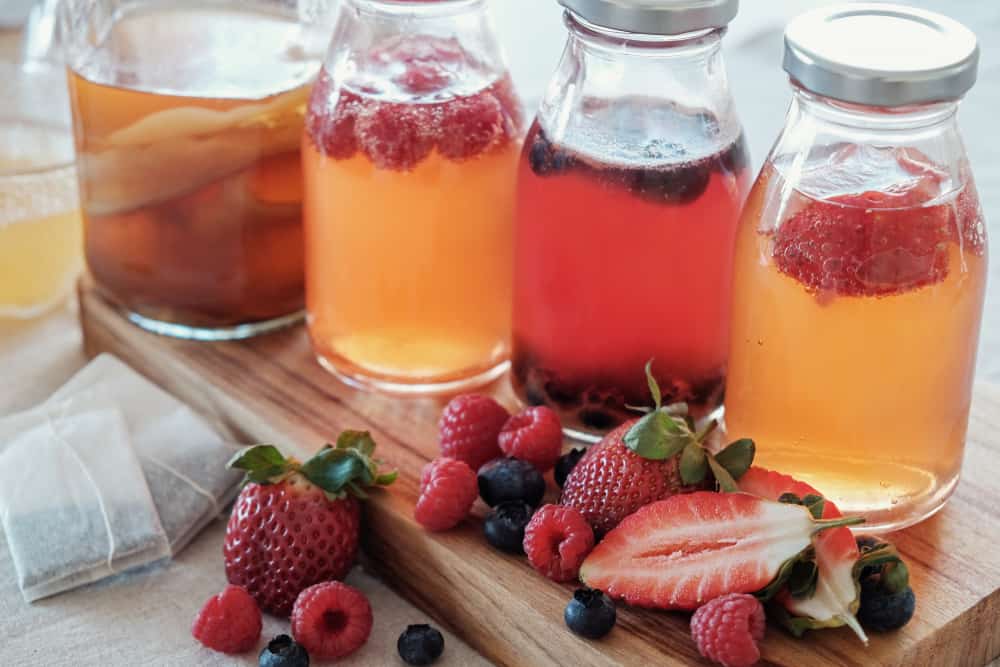 Kombucha has a pungent, sweet and tangy taste with a vinegary aroma. The carbon dioxide produced during fermentation creates a refreshingly fizzy and effervescent drink. The tea is often infused with fruit puree, herbs and spices.

Kombucha can be compared to a sparkling cider, and the majority of people prefer it to kefir.

The History Of Kombucha

The first recorded use of kombucha was in Northeast China, around 221BC. The ‘Tea of Immortality’ was renowned for its healing qualities. The fermented tea spread throughout the Silk Road, earning the name “kombucha” after Dr. Kombu, a Korean physician who used the tea to treat the Japanese Emperor.

After fading during World War II, kombucha re-emerged after a 1960s Swiss study compared its health benefits to yogurt. In the 1990s, natural health enthusiasts testified to the many benefits of kombucha as it rose to popularity in the US and domestic markets.

The late 1990s saw George Thomas Dave brew a fortune as the first person to commercialize kombucha. GT’s Living Foods is still the largest kombucha producer in the US.

In response to the rising awareness of gut health, kombucha consumption and popularity continues to increase.

The Potential Health and Nutritional Benefits Of Kombucha 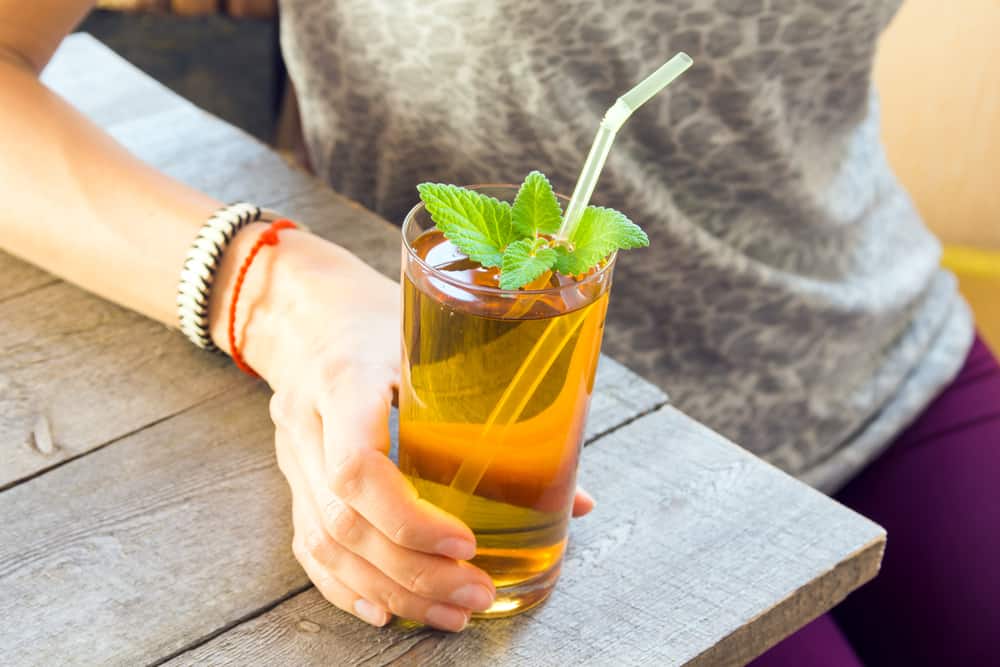 The Kitchn has a very informative guide on kombucha and how to brew your own batch at home:

The Possible Drawbacks Of Kombucha

4 Ways To Use Kombucha 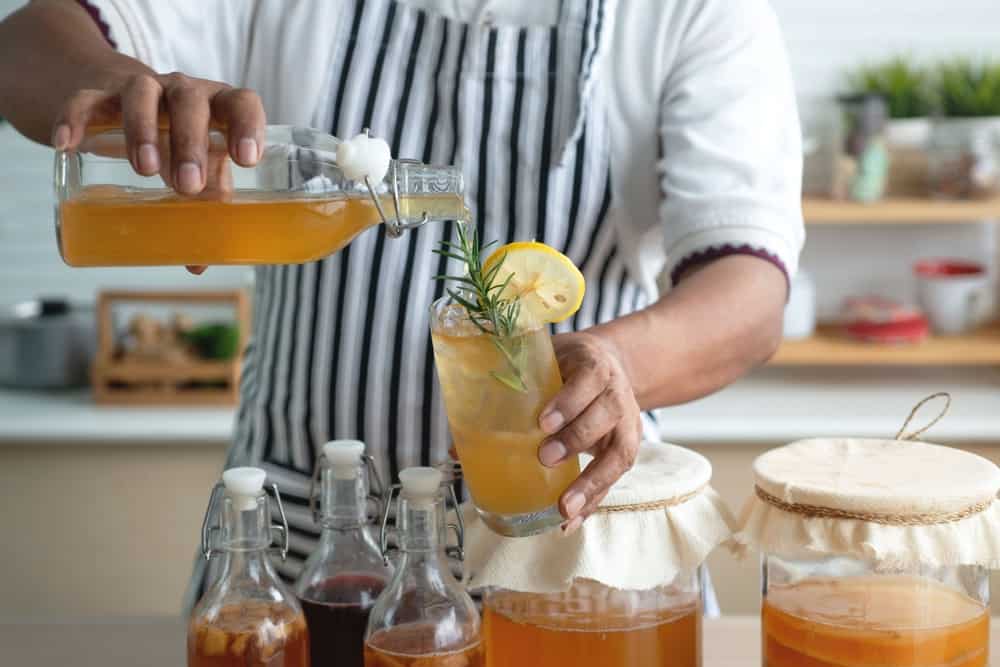 While the fermented beverage face-off confirms that both beverages contain beneficial bacteria and nutrients, you will find me sipping on kefir. Overall, kefir delivers a more potent and diverse supply of probiotics and lactic acid – without the caffeine and alcohol that are present in kombucha.