Here is everything you need to know about the gorgeous Japanese maple tree before planting one in your backyard so you'd know how to care for it. 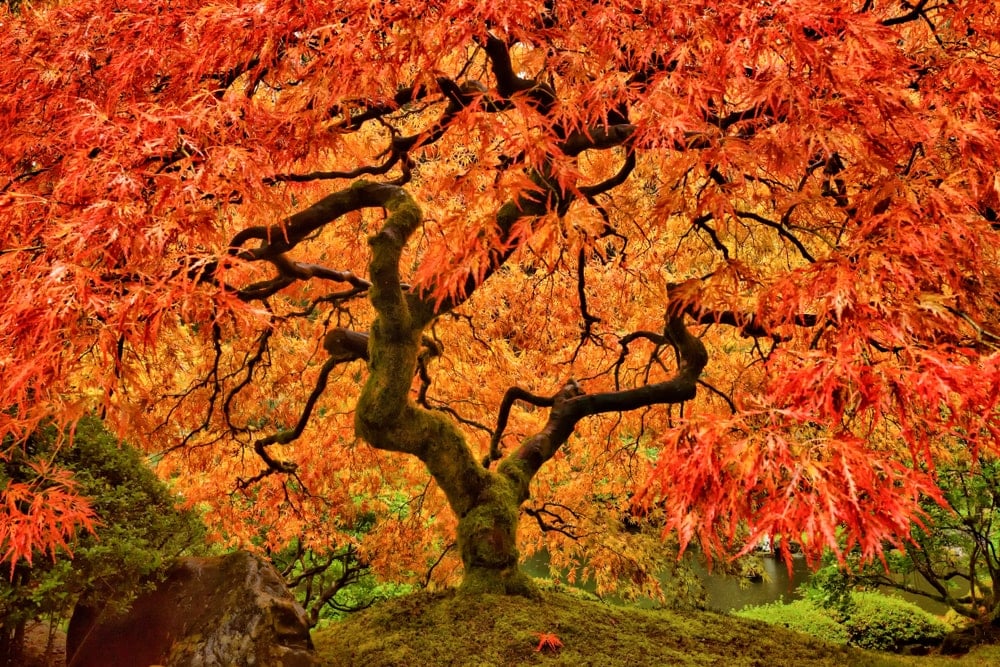 Japanese Maple trees may be one of the most recognizable varieties of trees, other than maybe the pine (since we all love Christmas so much).

The Japanese Maple is stunning for its delicate foliage, its intricate leaf shape, and its shocking and unusual coloring. They are appropriate for a small garden or a large property. They are found alone in fields or as the centerpiece of a Zen Rock Garden. Japanese Maples can be found as an upright tree or in a weeping shape. They are popular as a dwarf tree or as a full-grown monster.

Highly varying but constantly beautiful, it was worth it to share some information about this special type of maple. We’ll explore everything, from the varieties of Japanese Maple leaves, to how they like to be pruned, all the way to where their popularity started.

The Japanese Maple is a highly ornate and lovely tree, synonymous with the high art of oriental gardening. Sometimes considered as a deciduous tree or shrub, this gorgeous species of maple has three Japanese Maple varieties:

Acer Palmatum subsp. Palmatum – This subspecies has the smallest leaves of the three, ranging between 4-7 cm. They are found at lower altitudes, typically through central and southern Japan.

Acer Palmatum subsp. Amoenum – This subspecies is a slightly larger variety, with leaves ranging between 6-12 cm. They are typically found at slightly higher altitudes all throughout North Korea and Japan.

Acer Palmatum subsp. Matsumurae – This subspecies has the largest size of leaves, ranging around 8-15 cm. They are found only at high altitudes, strictly in Japan. 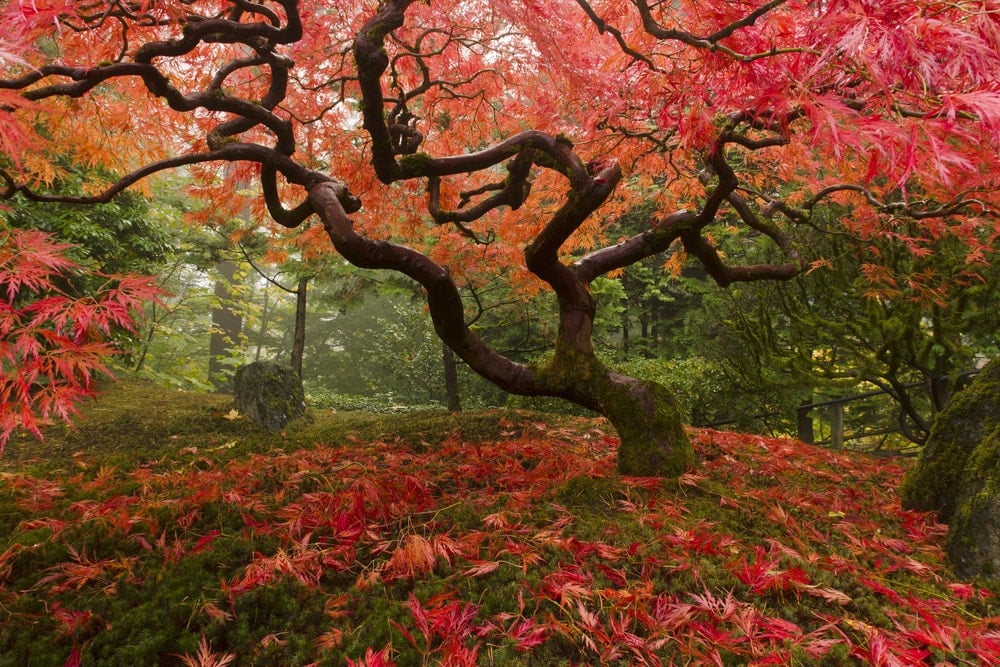 An 18th-century explorer named Carl Peter Thunberg was traveling in Japan and came across the Japanese Maple, awarding it the scientific term palmatum due to the hand-like shaping of its leaves. 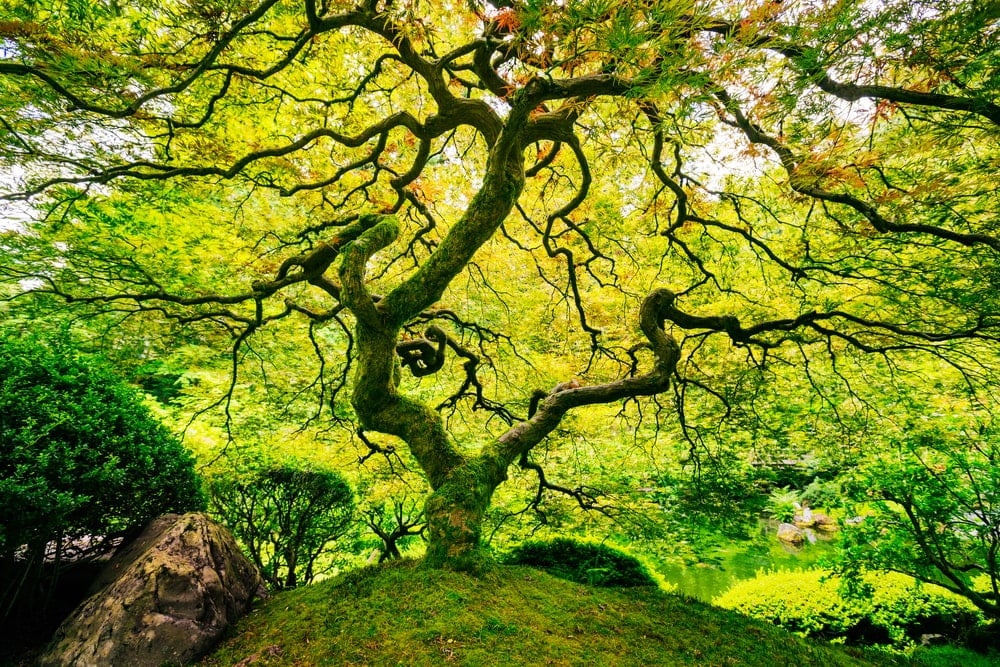 Where the Japanese Maple Grows

Although Japanese Maples are now grown all over the planet, they were first endemic to Japan, China, southern Russia, eastern Mongolia, and Korea.

Note: Be wary of leaf scorch. If they receive too much sun exposure for too long, it can shock the tree and cause early leaf loss.

These enchanting deciduous trees are highly adaptive, which isn’t common for elegant trees. They can thrive in neglect, but they do prefer moist, highly porous, and mildly acidic soil with ample organic matter. 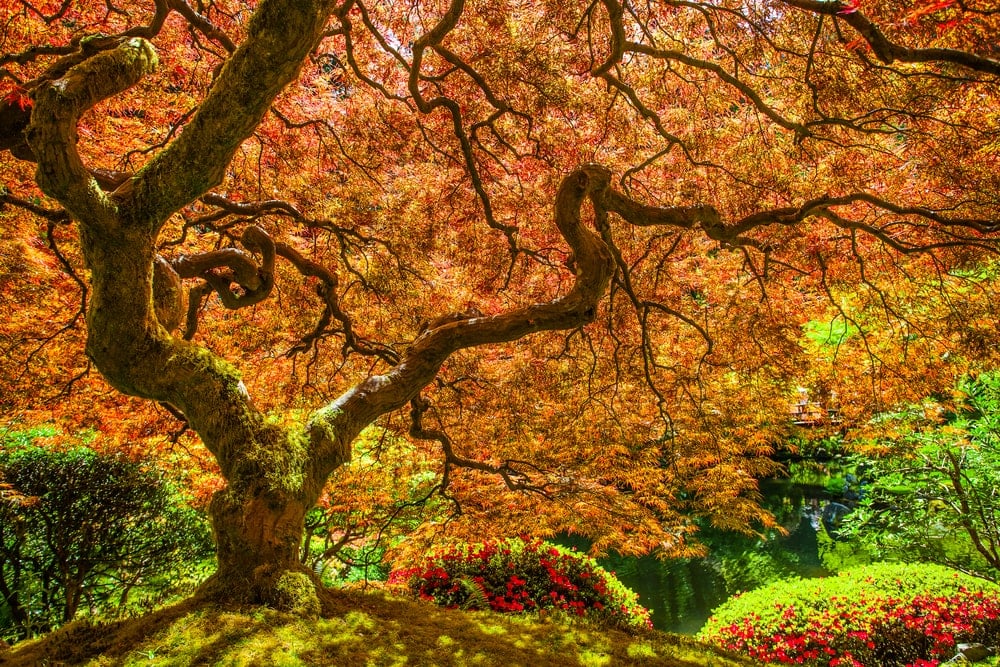 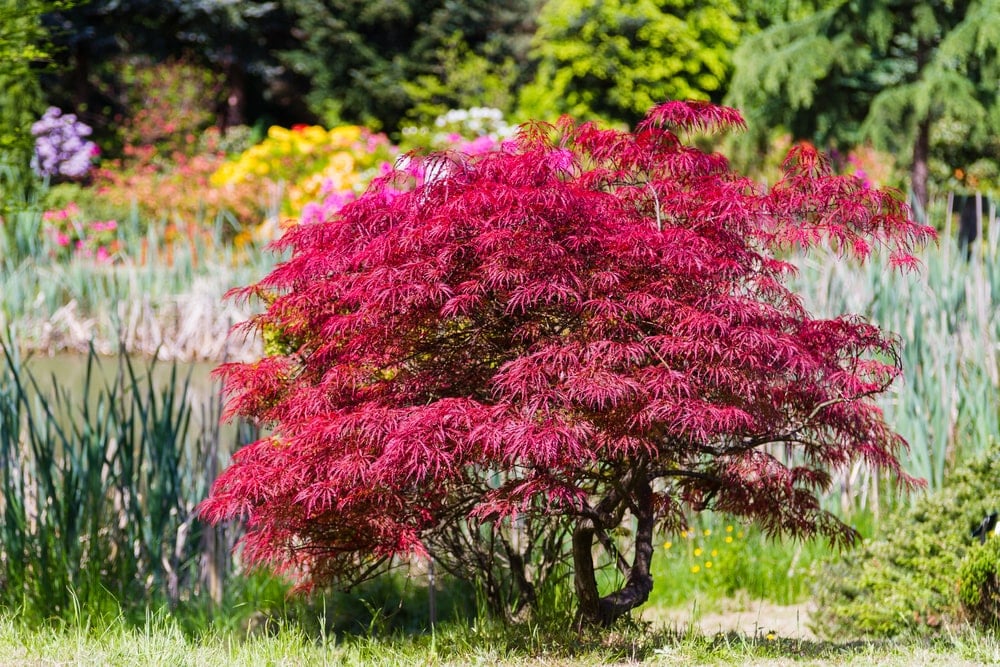 How to Care for a Japanese Maple Tree

If you have any experience with plant care, you start to realize that they can be simultaneously very resilient, and also extremely high maintenance. The Japanese Maple is no exception to this dichotomy.

Like all other deciduous trees, the color of the leaves will change throughout the seasons. Ranging from stunning fall color foliage to delicate and gentle leaf color, these small tree varieties will bring enchantment to any property. Leaves that are brilliantly crimson in the fall will change to deep green in the summer if the season is particularly hot.

The Japanese Maple tends to be rather sensitive to temperature. Be careful not to plant a baby maple tree too close to the winter, as frost can severely stunt its growth. The ideal time to plant this type of tree is in early fall. This way during the dormant winter months, the tree will dedicate energy towards forming a strong root system instead of growing its crown. 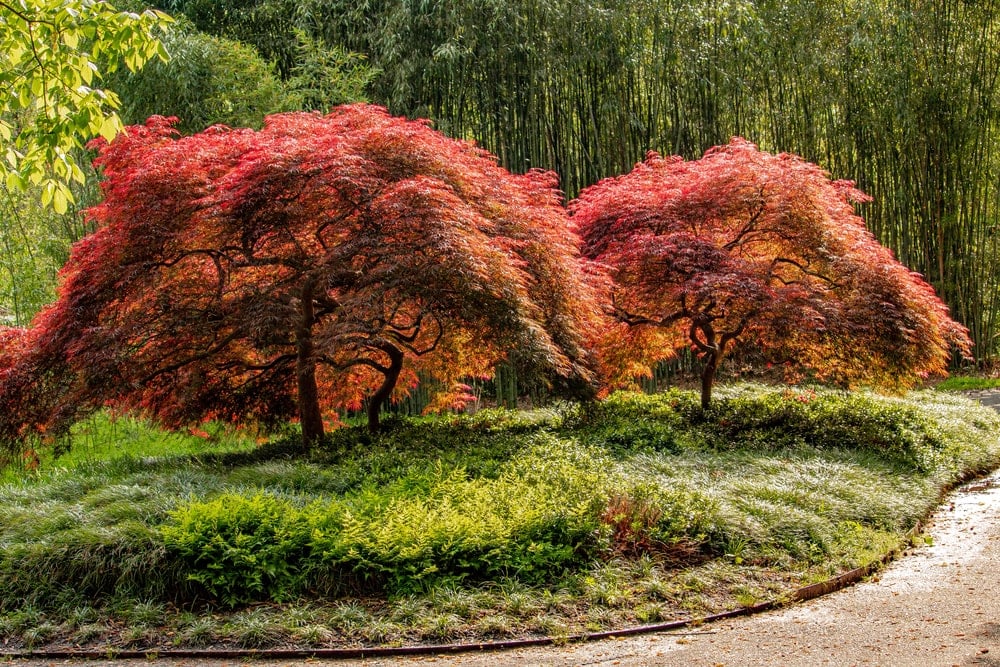 It is best to plant it in a location that is nicely protected from the wind. As it is best with most types of trees, they need to have the opportunity to develop strong roots. They will actually start their lives out quite successfully in a pot. They are self stunting trees, meaning that they will stop the growth of their crown when the roots are confined.

This is the area where Japanese Maples are surprisingly resilient. They can still thrive if they are subject to draught or irregular watering. They can also be quite prosperous in low nutrient soils. It is best if their soil is slightly acidic, moist, and well-drained. 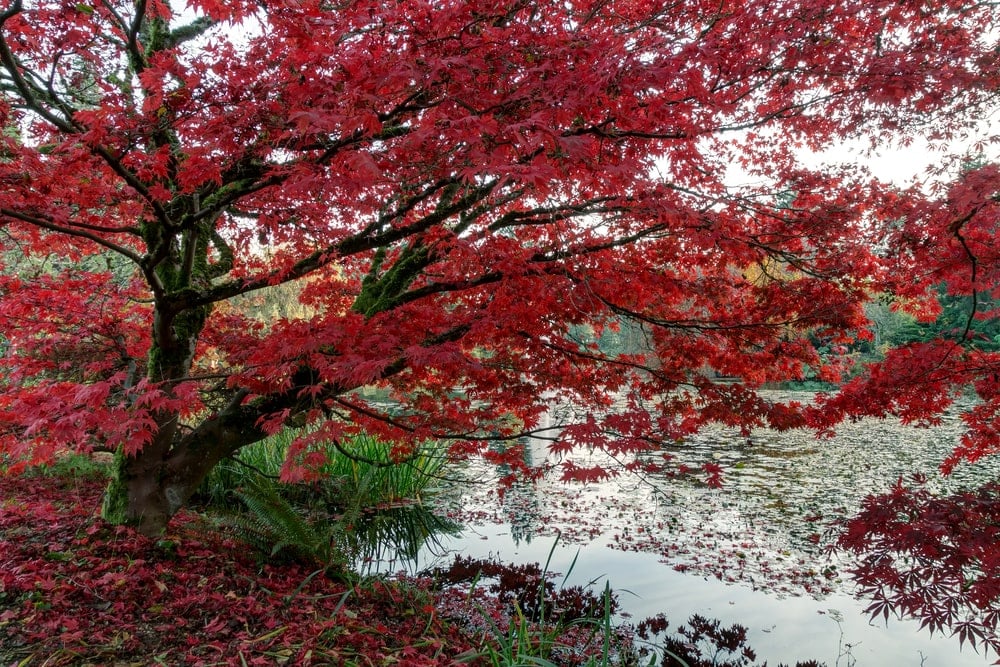 Mulch is always a good protector for Japanese Maples as they are quite sensitive to extreme temperatures. protecting the top of the soil (but avoiding the base of the trunk) will help keep the soil from getting too hot or too cold.

If you are intent on using a fertilizer, keep to fertilizers that are low in nitrogen. Ensure to apply fertilizer in the spring. If it is applied in the summer or fall, this will be detrimental to the tree’s winter resilience. 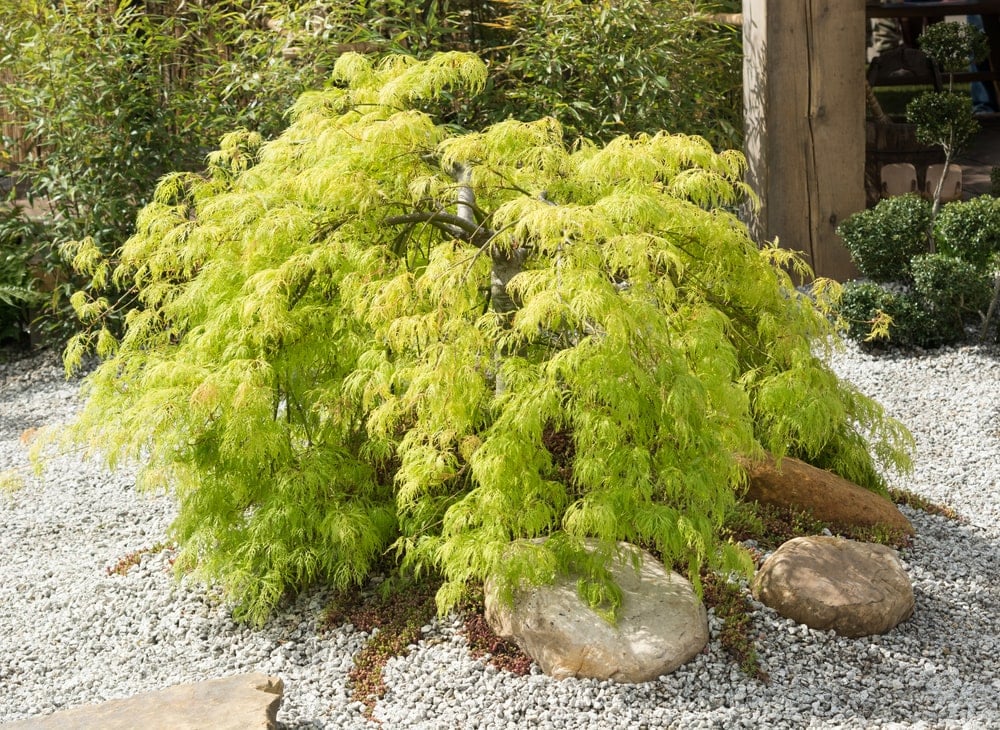 It’s possible that Japanese Maples are so popular in Japanese artwork because of their naturally symmetrical form. They tend to grow in even and attractive canopies. If you are intent on pruning, really try to avoid doing this in the colder months. The cuts will end up oozing sap in the wintertime, making it vulnerable to diseases and risking weakening the tree.

Pruning should be done between July and August so that the sap isn’t encouraged to ooze out. Feel free to remove the lower hanging branches and any others that don’t seem to be too healthy, or are growing in an awkward direction.

Japanese Maples are rather quickly growing for tree standards, and can sprout up an impressive 1-2 feet within a year! They will slow down this growth rate as they approach maturity.

Due to the fact that Japanese Maples have non-invasive root systems and really don’t mind sharing soil space, they make excellent symbiotic partners for other plants. A few of those are as follows: 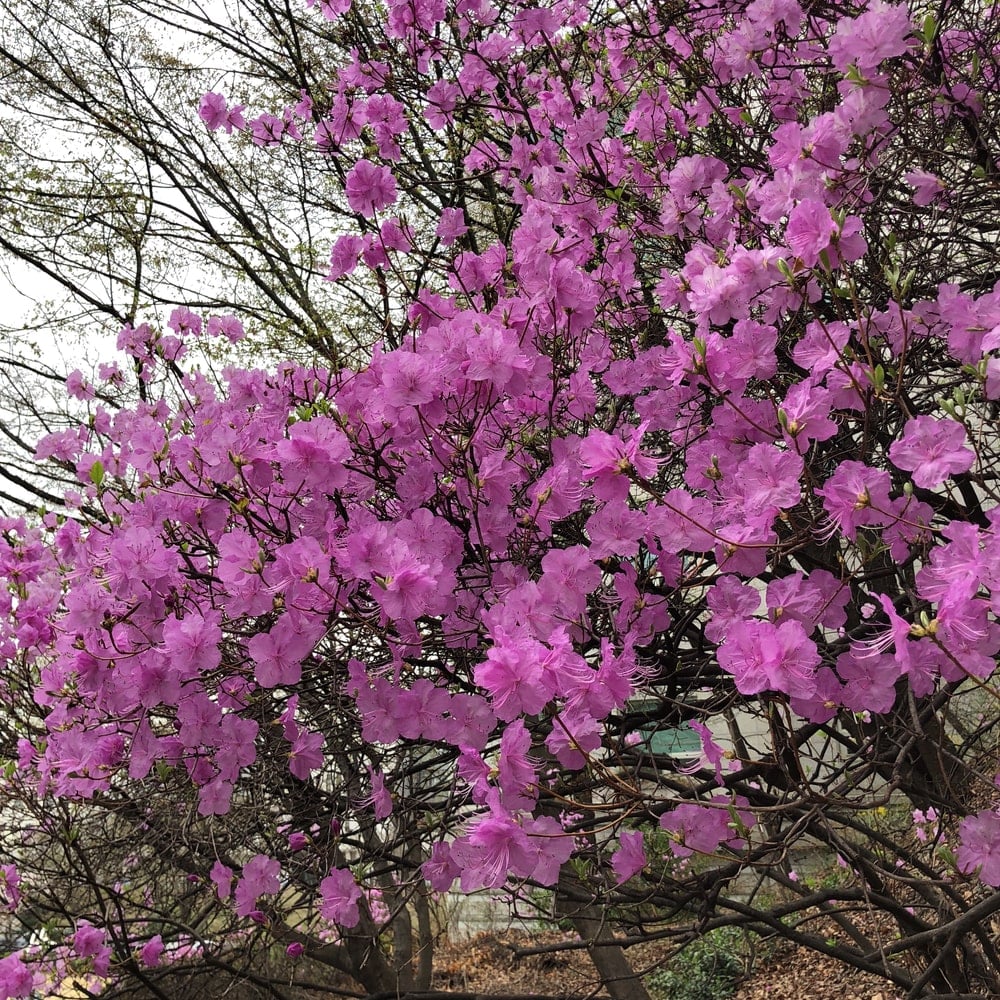 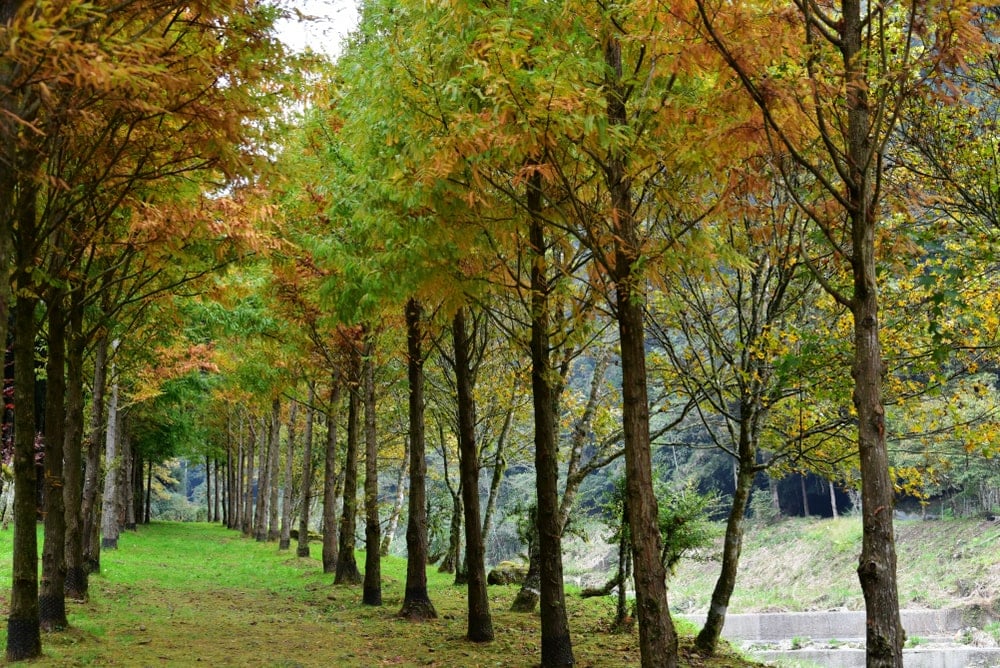 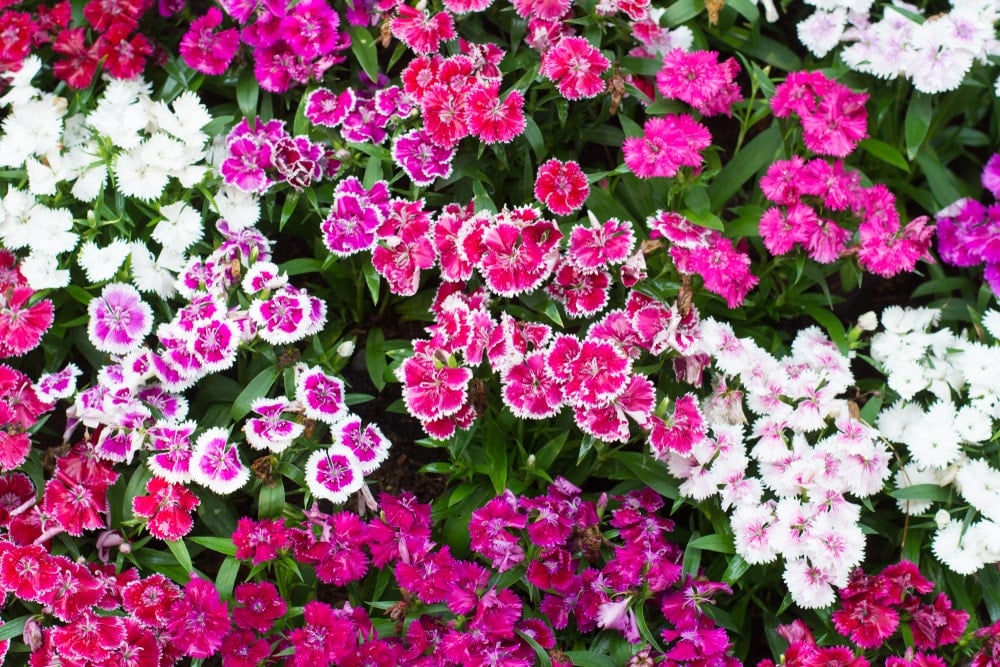 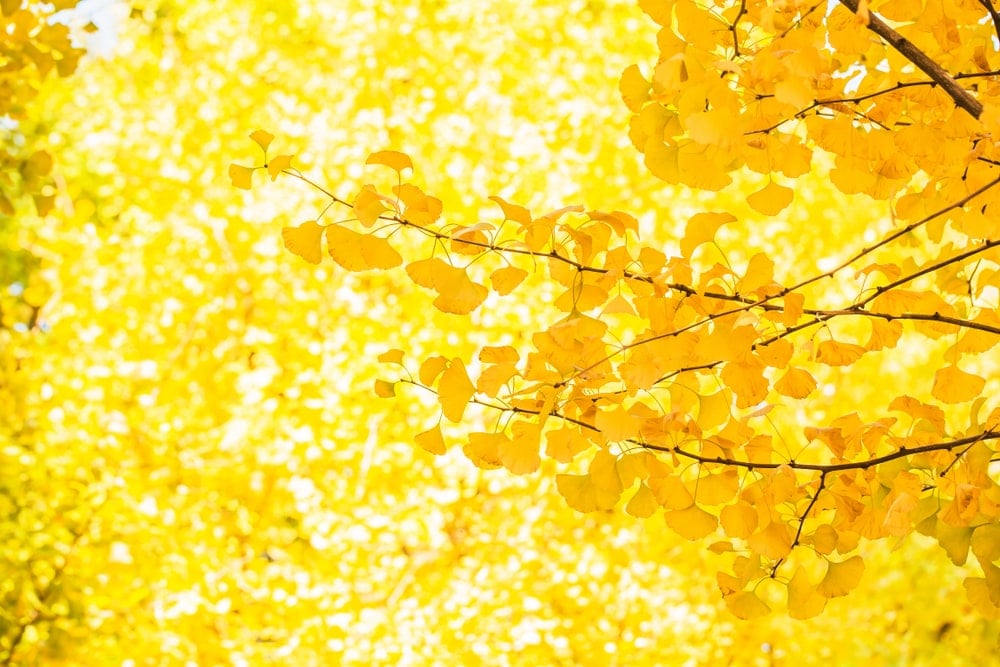 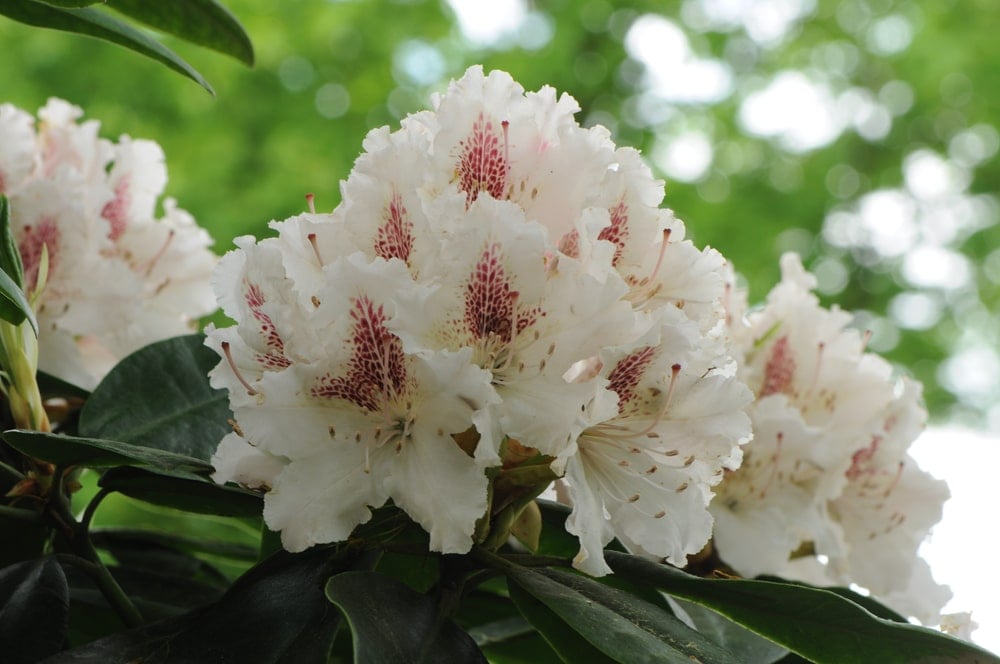 Why are my Japanese Maple leaves turning green?

It could be because of sun exposure or temperature. Depending on the time of year, the leaves of a Japanese Maple can fade to green because they are either too hot or receiving too much sun exposure.

They slow their growth as they approach maturity, but at the beginning of their lives they can sprout up rather quickly. However, it is best to allow their roots to develop earlier than the crown to encourage a stronger base.

What Japanese Maple is best for shade?

Houzz has some great advice on the best varieties of maples for shaded conditions!

What Japanese Maple is best for the sun?

New Garden has some really concise advice on the best Japanese maples that prefer sunnier conditions!

Yes, they are! Lots of deciduous trees are resistant to deers.

Yes, they can. Since Japanese Maples can be cultivated as Bonsai trees, they can perform quite well in pots. Especially since they are self-stunting, meaning that if their roots are confined it will halt their growth without causing detriment to the health of the tree.

When do Japanese Maples bloom?

They will bloom between May and June and are pollinated by insects.

What is a Bloodgood Japanese Maple?

The Bloodgood Japanese Maple is considered to be the tree’s most brilliantly purple leaf. It is a small rounded tree that produces red flowers, and red fruit as well.

Savanna Lentz hails from no place in particular. Having moved 30 times before the age of twenty, the constant change in environment has earned her expert status in all things homemaking. Whether it be interior painting and designing, baking, hosting charming dinner parties, or colour coating her collection of books, she is the cool kind of Stepford wife. A double major in English Literature & Creative Writing has truly harnessed her ability for communication, and her knack for the strange and comedic has been read far and wide. Savanna loves contributing to any canon, from short fiction to music reviews, DIY projects to climbing lifestyle magazines. This multifaceted lady is a gemini ginger (oh god), and she has got something to say!
Scroll to Top