There are many different versions of pizza in the United States. Neapolitan-style pizza is the kind that most people consider to be a classic, basic style of pizza. New York City has its own style of pizza, with enormous, foldable slices. California pizza is known for its unusual toppings, and Detroit pizza is known for its square shape, rather than the typical round pizza pie.

Deep dish pizza is also known as “Chicago style” pizza. Legend has it that deep-dish pizza was invented in the Windy City. During the late 1800s and early 1900s, Italian immigrants from the Naples, Italy area came to the city of Chicago in search of work in the city’s many factories. They brought along with them the love of their traditional pizzas. 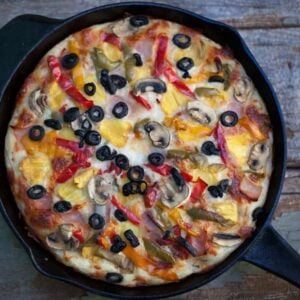 April Freeman
While classic pizza seems to have been invented by the Italians in the 1700s or 1800s, over the years, it has become a classic American meal. With a delicious crust, classic Italian flavors like basil, thyme, and garlic, and plenty of gooey cheese, almost everyone loves a classic pizza. While there are fans of a crispy, chewy, thin-crust pizza, most folks have a special place in their hearts for a deep-dish piece of pizza.
Print Recipe Pin Recipe Add to Collection Go to Collections
Prep Time 40 mins
Baking Time 30 mins
Total Time 1 hr 10 mins
Cuisine American
Servings 8 Large Servings

In the year 1943, two Italian immigrants opened a restaurant called Pizzeria Uno. They served pizza that was more like a pie than the typical thinner crusted pizza. They put the thick dough down into a cast iron pan and let the crust climb up the sides. They added mounds of toppings to match the thickness of the crust and baked it for much longer to ensure that everything was thoroughly cooked. Almost 80 years later, Pizzeria Uno is still in existence in its same location in Chicago, serving its classic deep dish pizza. While you may typically order deep dish pizza at an Italian pizzeria, did you know that you can create this classic dish in your own kitchen? By using the traditional cast-iron skillet, you can have a thick, chewy, and savory pizza. These heavy pans will give a great crunch to the outer layer of your pizza crust. If you do not have a cast-iron skillet, you can use a cake pan instead. You may want to divide the dough into two smaller cake pans if you don’t have one that is large enough.
Keyword Iron Skillet Deep Dish Pizza, Main Course, Recipe