Are you tired of hearing the kids argue about whose turn it is to get a favorite dessert? When you live in a family, sometimes compromise is necessary, but often, the compromise can lead to bickering. Our recipe for Individual Cheesecake Desserts can allow every member to have their favorites.

Part of living in a family is learning to compromise. Sometimes you get your favorite dessert, while other times, other people have their turns to enjoy their favorites. This recipe, however, sets aside compromise for one evening.

Every member of the family can enjoy their own favorite version of cheesecake when you make our recipe for Individual Cheesecake Desserts. 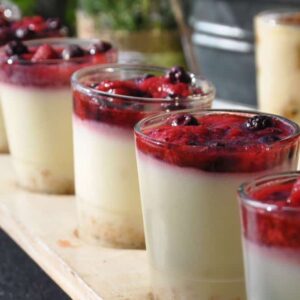 April Freeman
Our recipe not only makes light, fluffy, delicious individually sized cheesecake, but we include three different topping recipes so that you can have the cheesecake that is your favorite flavor and so can your family members. Our cheesecake recipe isn’t actually a traditional cheesecake recipe. We use a no-bake cheesecake recipe, so you don’t even have to turn on the oven to enjoy it.
Print Recipe Pin Recipe Add to Collection Go to Collections
Prep Time 15 mins
Chilling Time 30 mins
Total Time 45 mins
Cuisine American
Servings 6 Cheesecakes

Another great thing about this recipe is that you can make it in eight-ounce jelly jars and cap them with the provided lids, storing them in the fridge. This means that you can whip up a dessert over the weekend and then have a serving every single night. If portion control is something that you struggle with, this dessert recipe takes care of that for you. If you want a smaller serving size, you can use a six-ounce jelly jar instead of an eight-ounce size. If you choose to go with the smaller size, you will need ten jars instead of six.
Keyword Dessert, Individual Cheesecake Desserts, Recipe