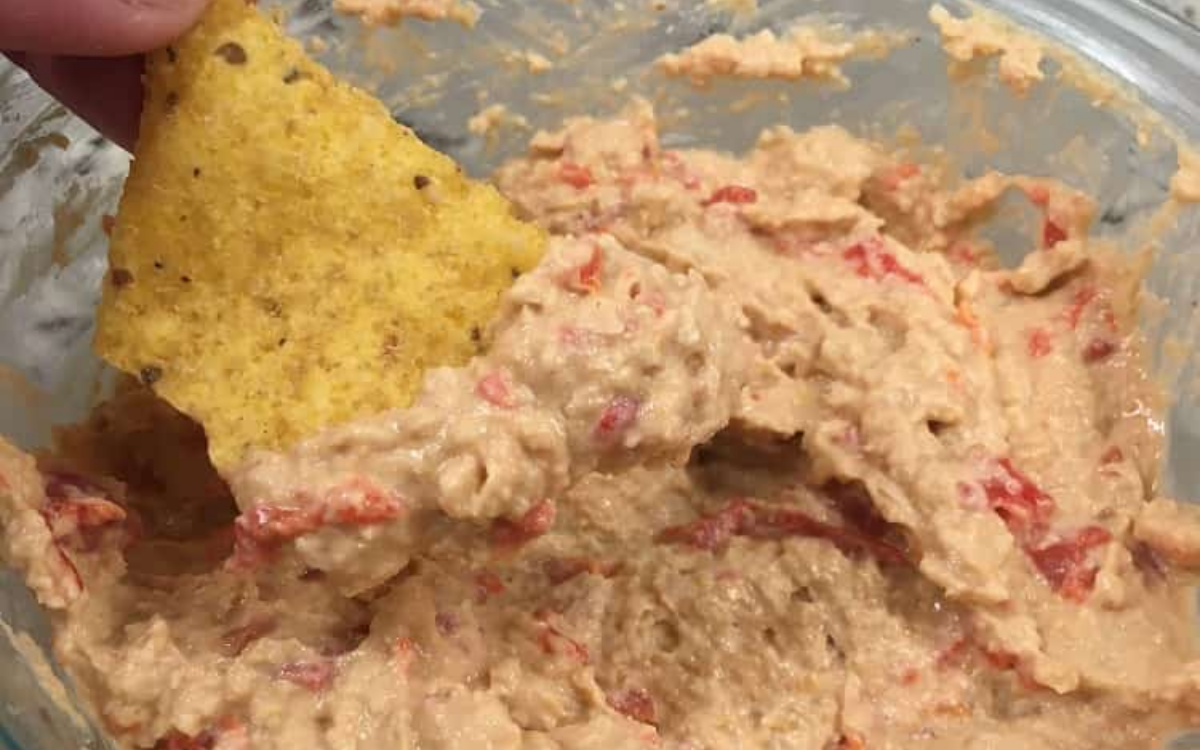 In all honesty, nobody knows for sure. However, based on historical information, hummus was likely first devised in Ancient Egypt with the earliest mention in the 13th century.

Since chickpeas are abundant throughout the Middle East and are still eaten today, the fact that the word hummus means chickpea in the Arabic language, likely points to the Middle East for its origins. Historical documents describe a dish, like modern hummus first being consumed in 13th century Cairo. However, that doesn’t stop other areas of the world from claiming hummus as their own!

With so many cultures staking claim to the invention of hummus, countless varieties have emerged, several of which are listed below. Keep reading to learn more! 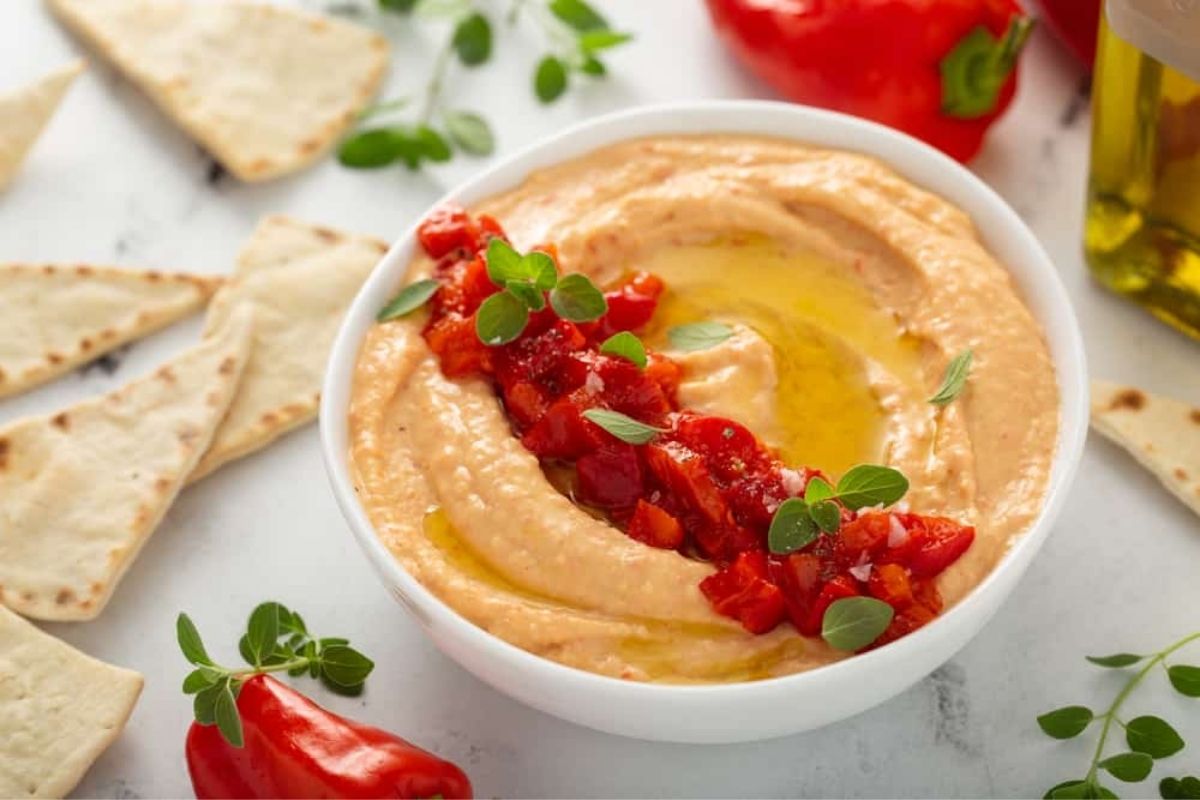 Rockin’ Red Pepper Hummus is a filling, tasty and nutritional snack that is ideal for the 3 PM afternoon work lull or for dipping at parties. By blending chickpeas, lemon juice tahini, garlic, olive oil, and spices, you will yield six servings, which is ideal for multiple snacks throughout the week or perfect for a dinner party.

Adding a pinch of cayenne pepper with further spice up this snack to give you energy and nutritional value throughout the party or workday.

The Creamier the Better Hummus 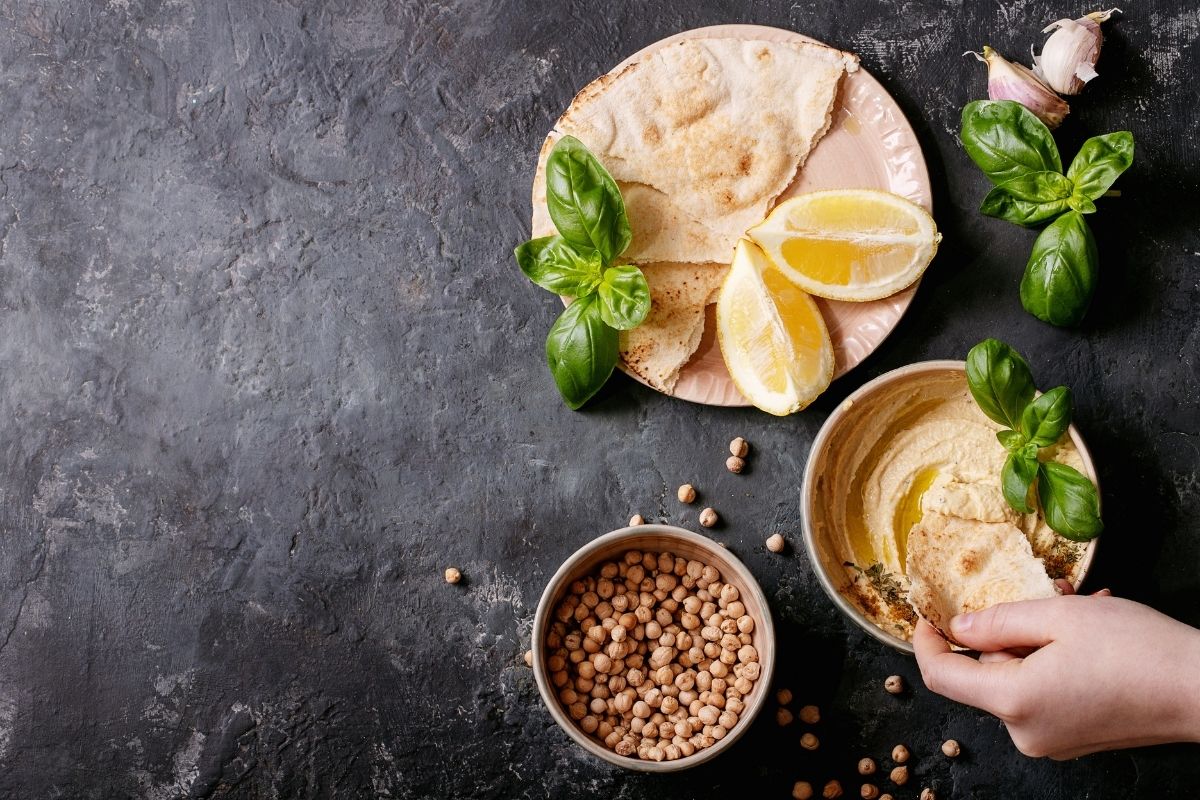 This hummus type is a creamier version of the original with the addition of cumin to round out the flavor. By combining chickpeas, baking soda, garlic dried red chiles, a bay leaf, lemon juice, tahini, olive oil, cumin, and salt in a food processor, you will have four cups of hummus to enjoy. The baking soda contributes most to the creaminess of the Creamier the Better Hummus recipe. 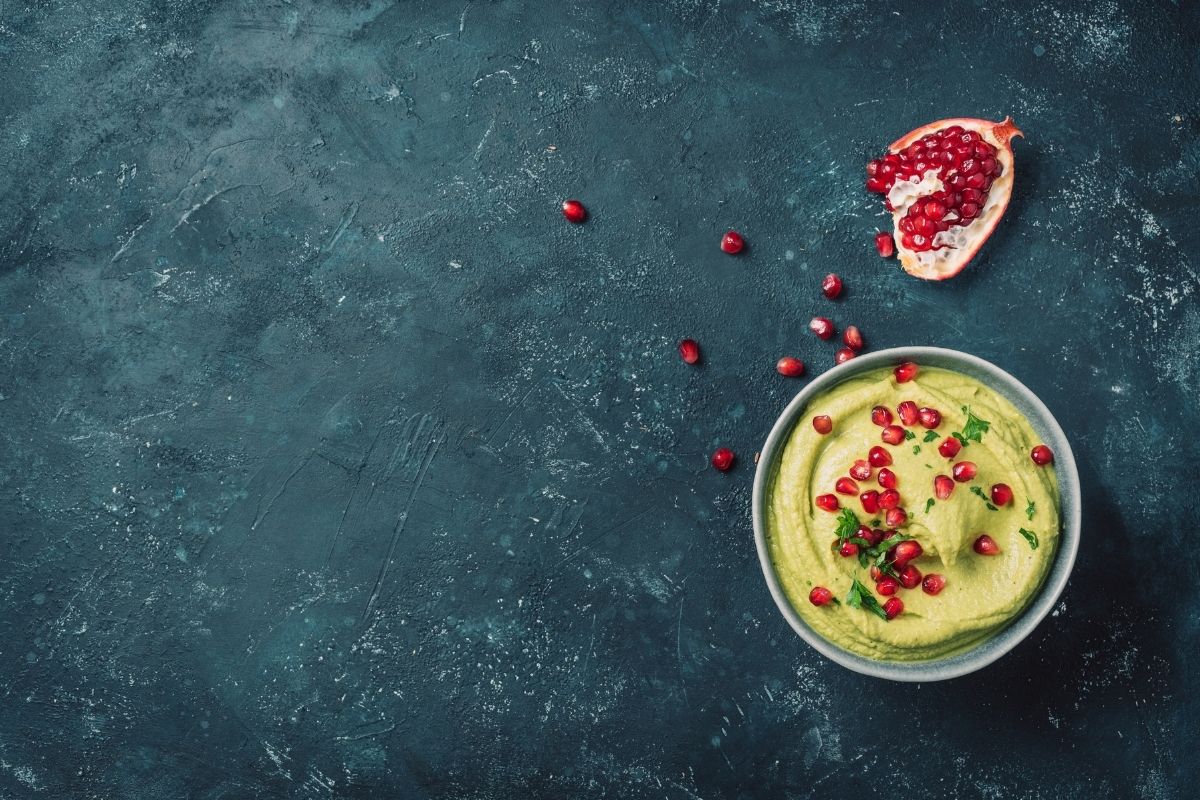 The parsley, basil or tarragon, and green onions or chives really make this Green Goddess Hummus recipe a winner. Flavored with these fresh herbs, this recipe gets its name because of the resulting green color after blending. This recipe has a prep time of only three minutes a cooking time of only eight minutes and yields 1-3/4 cups of hummus, which is perfect for several days of healthy snacking. 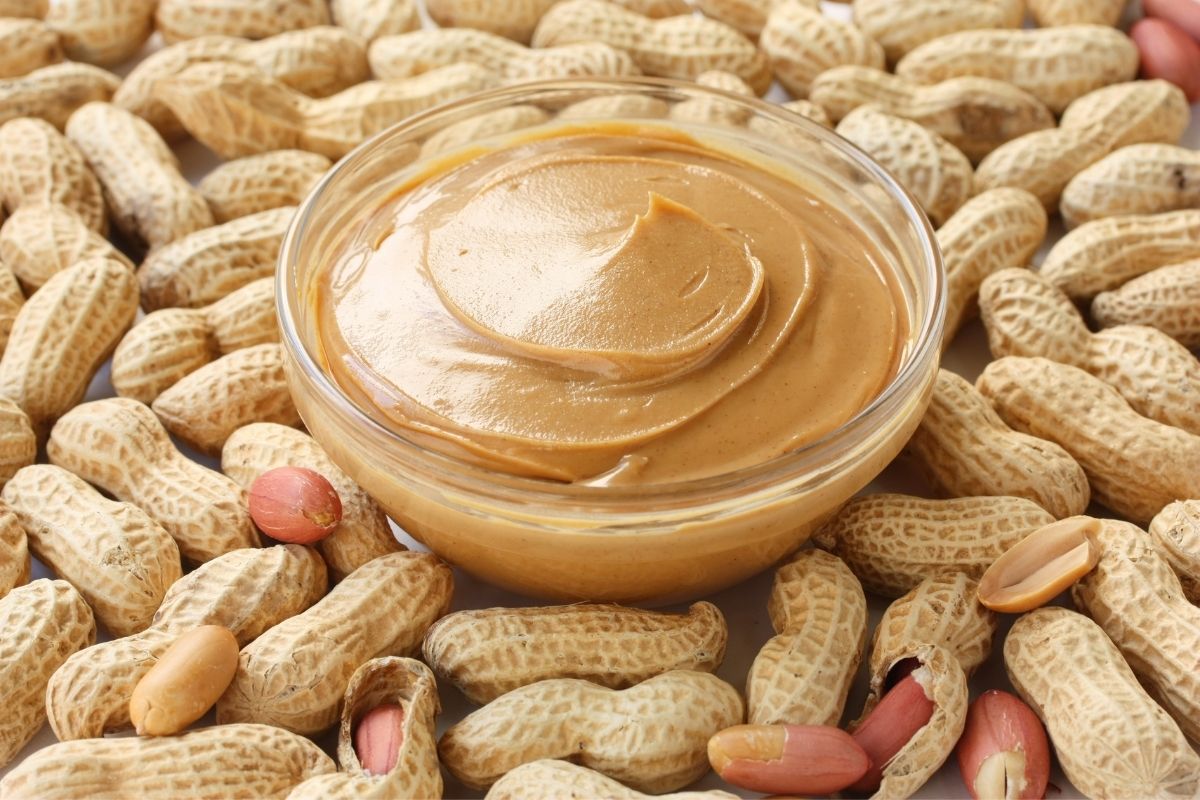 For many, nothing beats the smoothness and taste of homemade hummus, despite the convenience and availability of prepacked hummus in most grocery stores. However, traditional hummus isn’t always the easiest taste for children who haven’t grown up with it. Enter the Surprising Hummus Mix recipe, which features peanut butter.

Yep, I said peanut butter hummus! Since the United States is the leading importer and consumer of peanut butter, this is a great recipe for all ages.

This recipe includes the typical chickpeas, olive oil, lemon juice, garlic, and salt that are the base for all hummus varieties. However, the addition of 4 tablespoons of all-natural peanut butter adds a sweet and smooth taste and texture to this already delicious snack. 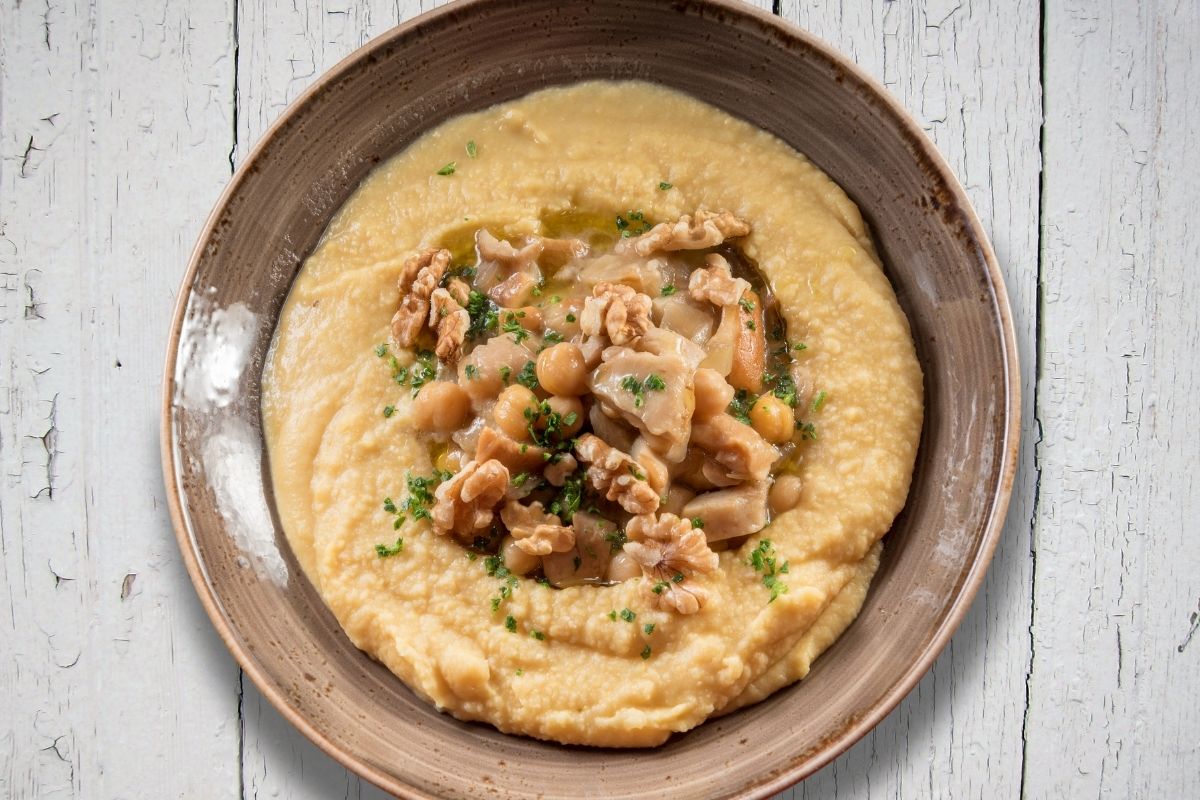 No-frills don’t mean this recipe doesn’t taste amazing. Instead, it simply refers to a more traditional Israeli recipe that still knocks my socks off. The main difference between this recipe versus hummus from other countries is to use high quality, Israeli olive oil, and light roast tahini. The result of this magnificent, yet No-Frills Israeli hummus recipe is a creamy, smooth, and nutritious snack, just like mom used to make! 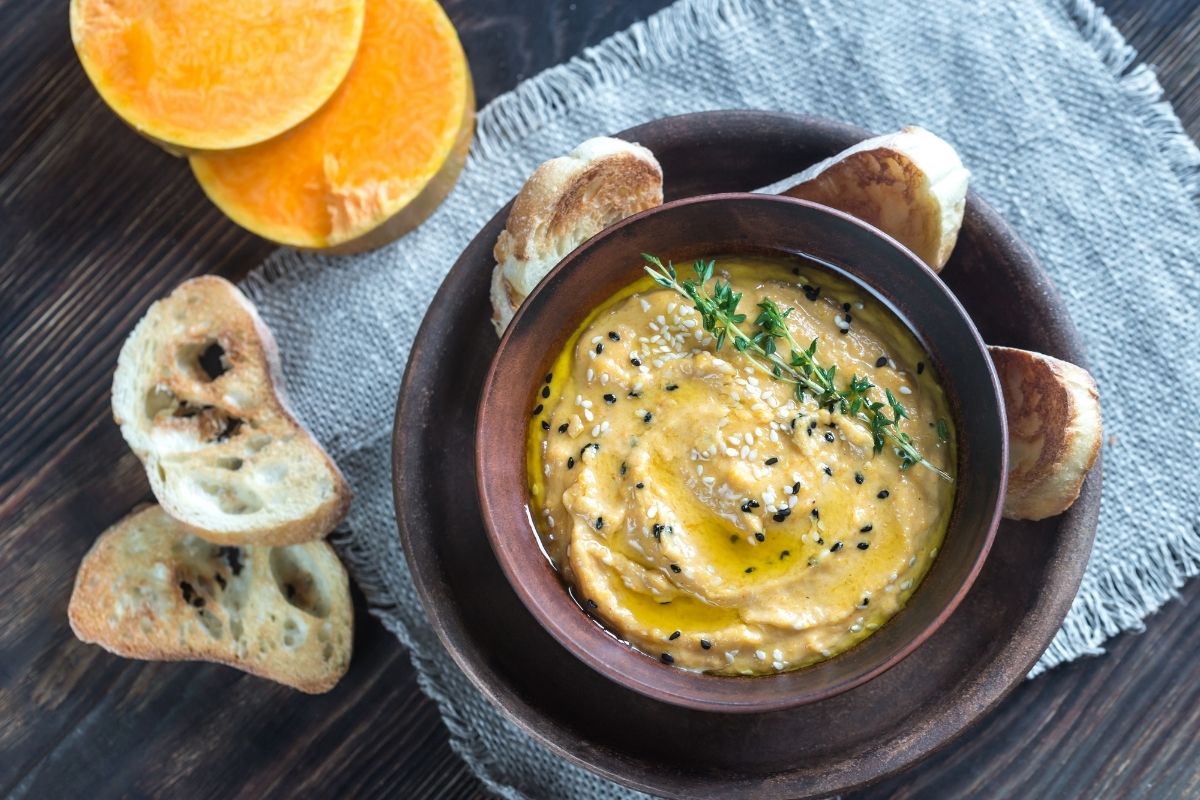 Tahini is the paste that results from sesame seeds, which contribute to the nutritional characteristics of hummus. I was at one of my favorite Middle Eastern restaurants over the weekend and came across a Toasted Sesame Hummus appetizer that I had to try. I expected this recipe to have an overpowering sesame flavor, but it ended up being well-balanced a delicious.

After a few bites in, I realized their trick was to drizzle toasted sesame oil on top, so simple, yet so impactful! Toasted sesame oil is most associated with Southeast Asian cuisine and tahini is the Mediterranean, but combined they are amazing!

Do Not Miss Sun-Dried Tomato Hummus and Roasted Broccoli Crostini 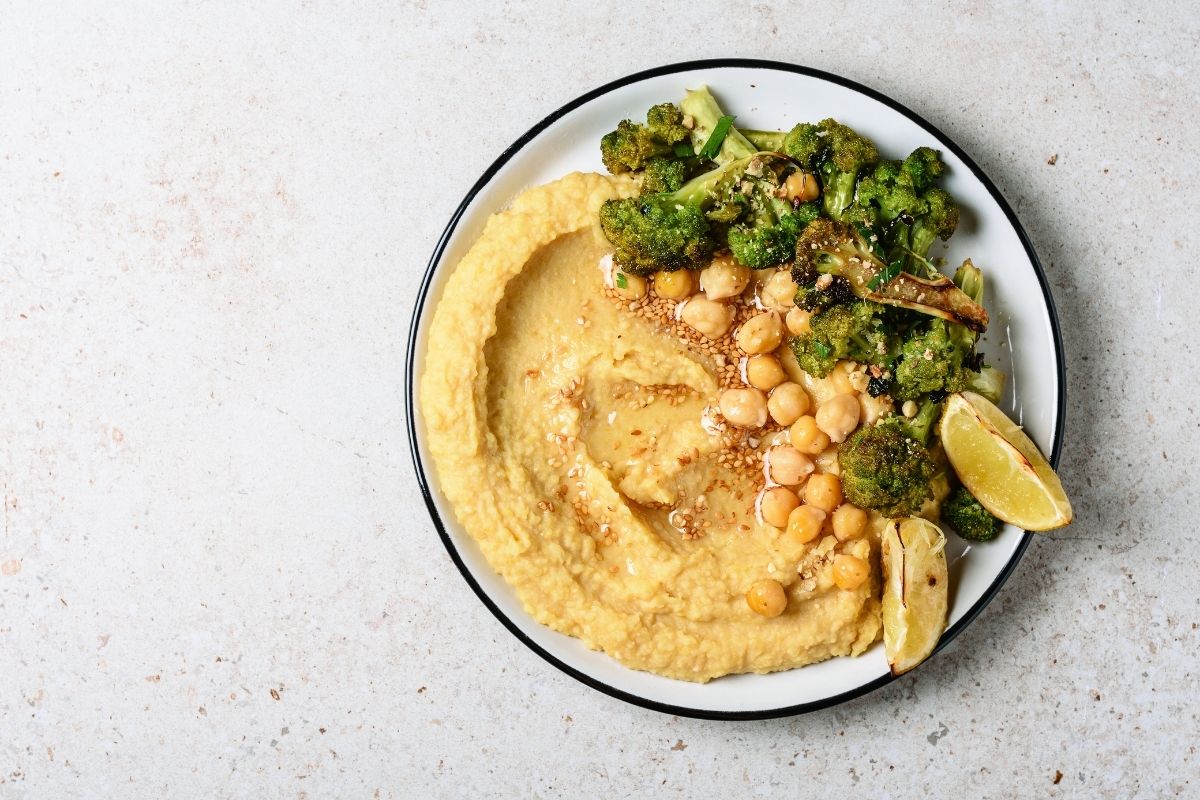 This Sun-Dried Tomato hummus recipe traverses the normal snack recipe by adding Roasted Broccoli Crostini. This has allowed me to turn the recipe into a sandwich or just enjoy the hummus on its own, it’s all gold. The recipe calls for broccoli, olive oil, salt, and pepper to roast in the oven for 15 to 20 minutes until crispy and golden.

The hummus features all the traditional ingredients with the addition of drained oil-packed sundried tomatoes added to the tahini and lemon juice mix. The result is a healthy and delicious snack, lunch, or party appetizer!

How Can Anyone Pass Up Sweet and Tangy Hummus? 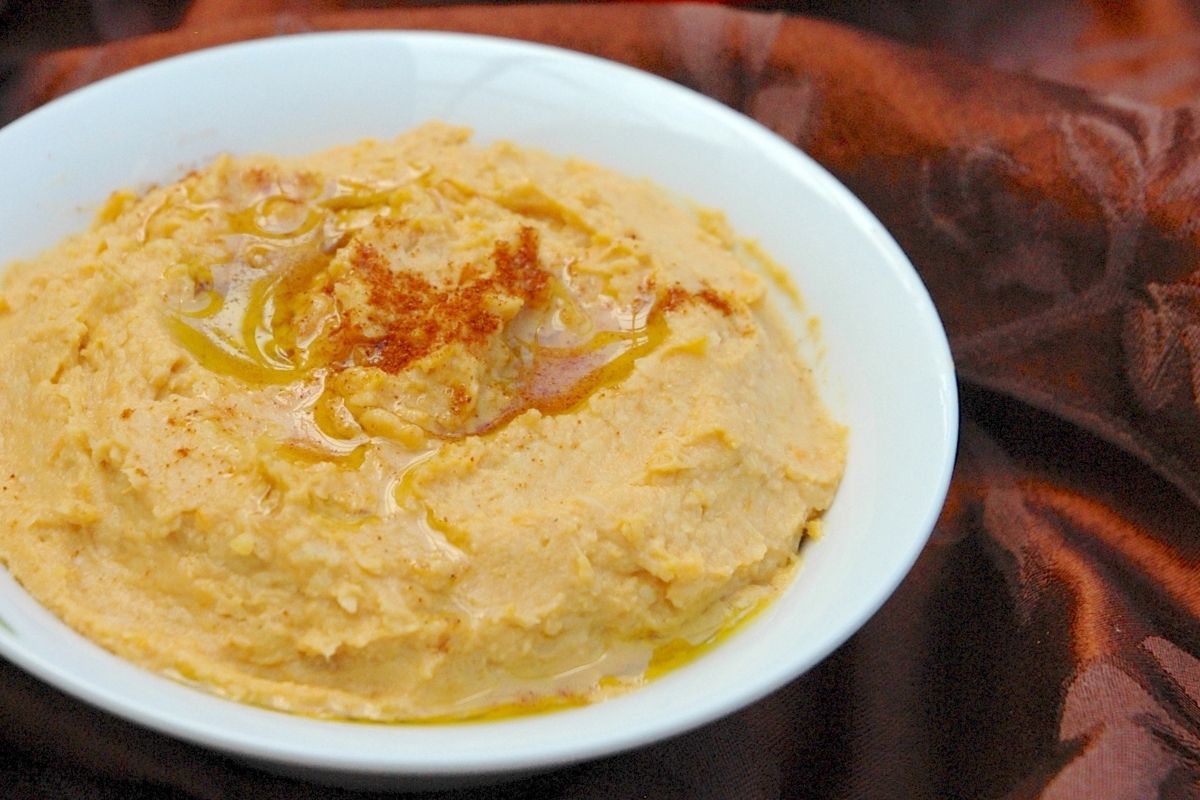 The answer to this question is, nobody can. This garlic-free hummus is ideal for when I’m at the beginning of the relationship with a new partner, to avoid any garlic breath! Don’t worry, the quality and taste of the hummus do not disappear due to the addition of a red pepper paste, which delivers a smoky-sweet flavor.

Red pepper paste can be found online or in Middle Eastern markets. The other addition to this recipe is the pomegranate molasses, which further provides some sweetness. 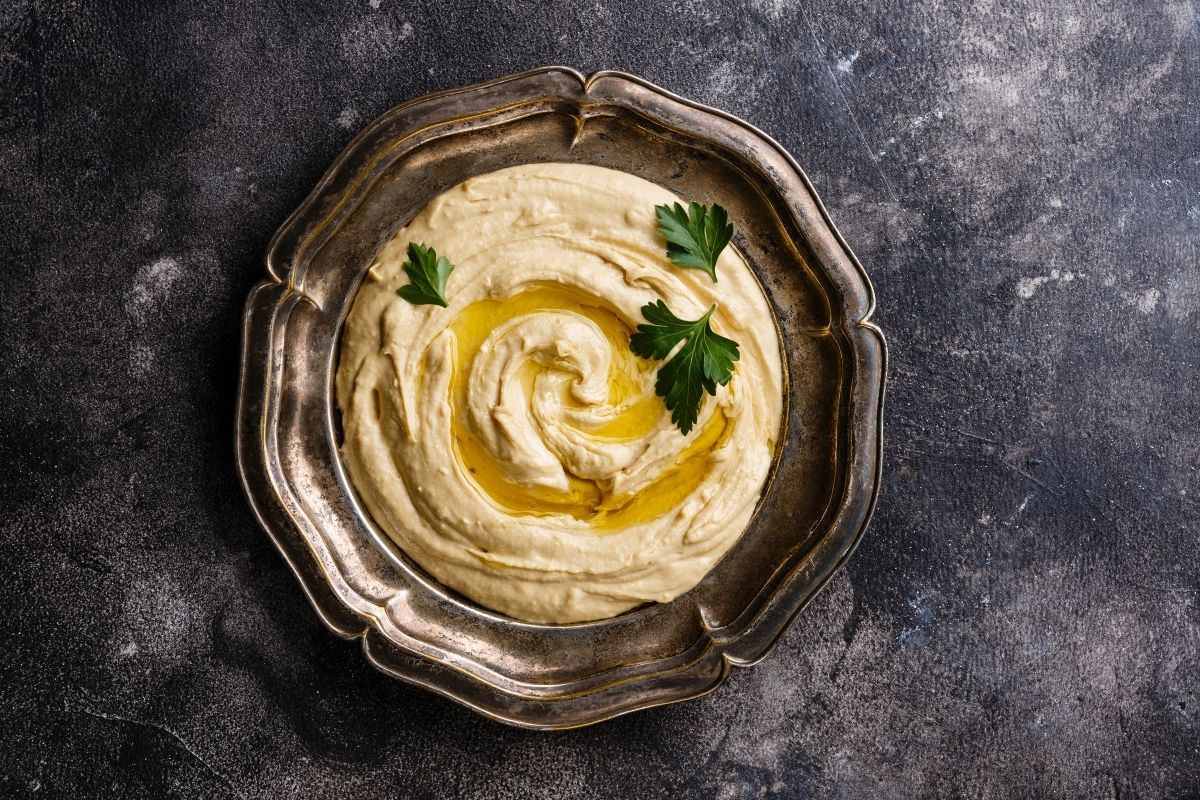 While there are different ways to execute this including seasoning the peanuts with Old Bay and star anise, the easiest method with an excellent taste is to boil in saltwater. This also allows me to make the peanuts in advance and refrigerate them for up to five days! This Bangin’ Boiled Peanut Hummus recipe is simple: boil the peanuts and blend them with the traditional mash of ingredients for another incredible and healthy flavor!

Black-Eyed Pea, Not the Band, Hummus 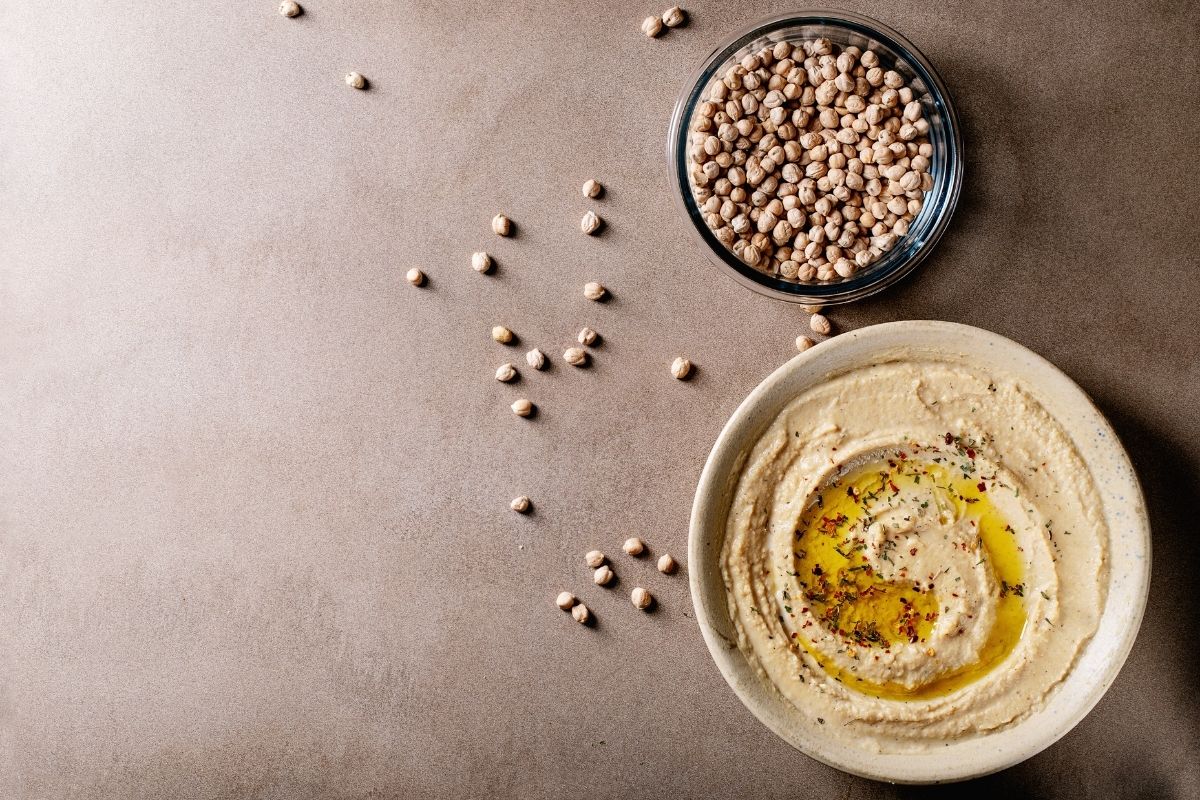 I used to only consider chickpeas for hummus since it’s the main ingredient. Boy was I wrong! This Black-Eye Pea Hummus recipe replaces chickpeas with black-eyed peas to deliver a completely different flavor and adds a southern flair to the dish.

This dish is an easy and excellent option to use leftover black-eyed peas from other dishes. The process is the same as using chickpeas, simply add rinsed black-eyed peas, lemon juice, garlic, salt, olive oil, water, cumin, and lemon juice to the food processor bowl and blend until smooth.

Add tahini and more water until the consistency you require is achieved. 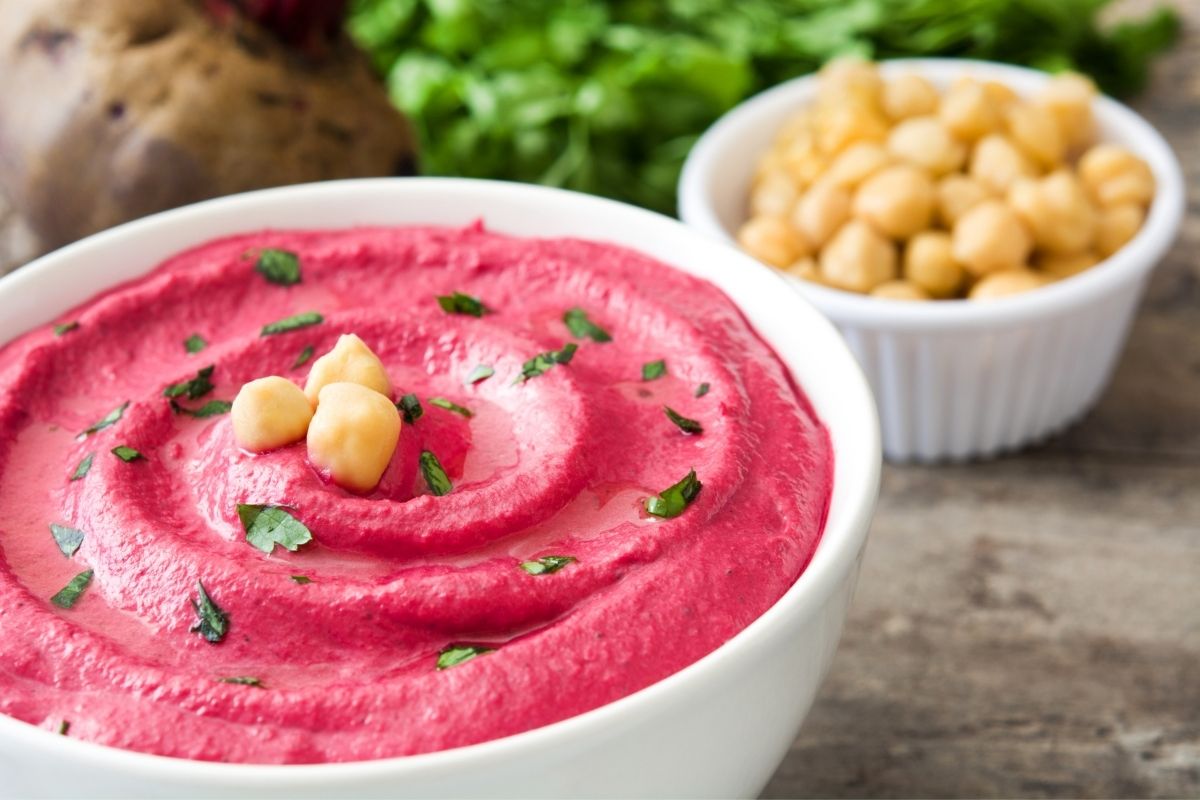 Change up the regular old chickpea hummus by adding beautiful red beets to the blend. Beet and Ricotta Hummus offers an amazing snack during the day and is the ideal spread for your wrap and makes an amazing and colorful appetizer before dinner. Beets are an incredibly healthy addition to all diets with the ability to lower blood pressure, making them a heart-healthy addition to your normal eating routine.

This recipe adds beets and ricotta to the mash, in addition to all the traditional hummus ingredients including chickpeas. 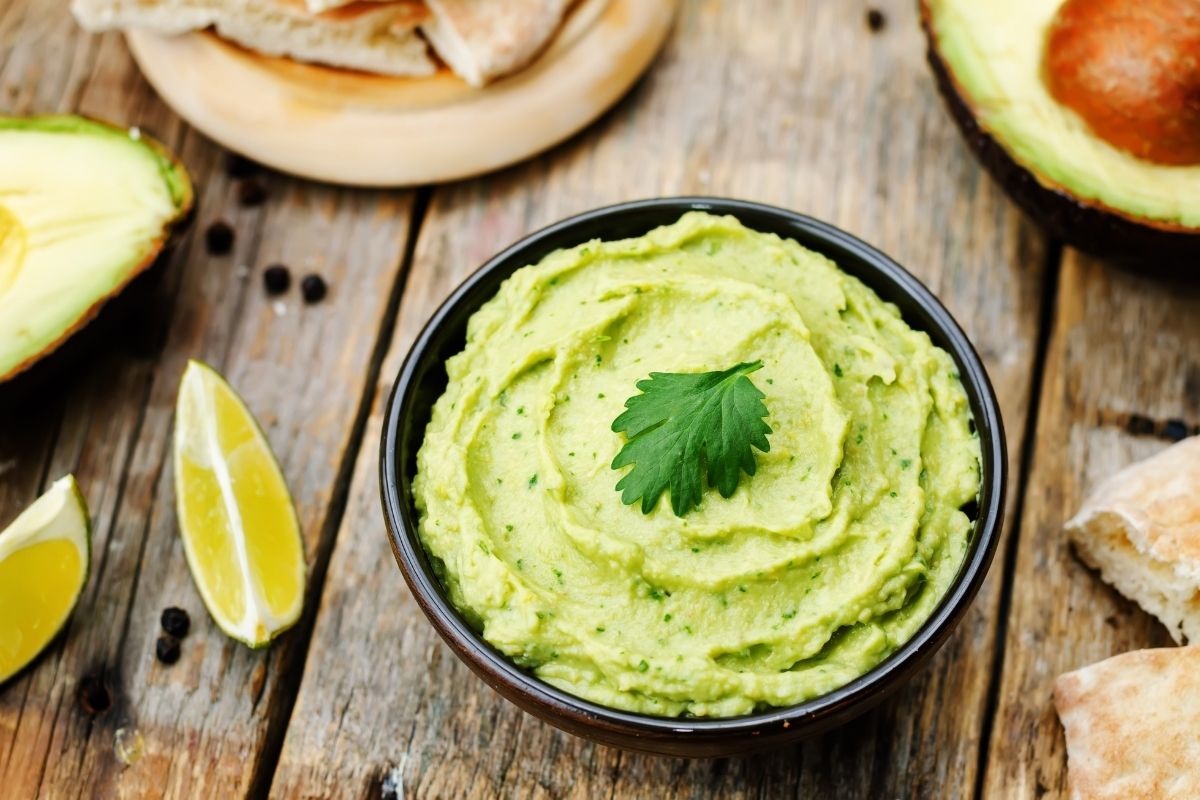 Avocados are considered a superfood due to the high good fat content and many other health benefits. Therefore, it’s only natural to add them to a highly nutritious snack like hummus. This Herbaceous Avocado Hummus recipe had me saying, “there’s no way this is a healthy snack!”

Alas, it is, and the beautiful green color offered presented by the ride avocados is to thank! Unlike traditional hummus and other variations, this recipe is best to make right before serving since avocados tend to brown when exposed to air and this is no exception.

With the addition of snap peas, now this is getting serious. Honestly, who would have ever thought of adding snap peas to hummus? Not me! The key to this recipe is to ensure the sugar snap peas are sliced thin to add as a topping to your traditional hummus.

Also, this recipe adds sweet basil leaves and a little white wine vinegar to balance the flavor but add a bit of a kick to your next afternoon snack! The presentation ends up with the normal and delicious creamy hummus but topped with the bright green snap peas, which is the perfect centerpiece for a party or just a normal family dinner night!

This is Not a Copy of the Recipe Above Since I’m Adding Pea Falafels! 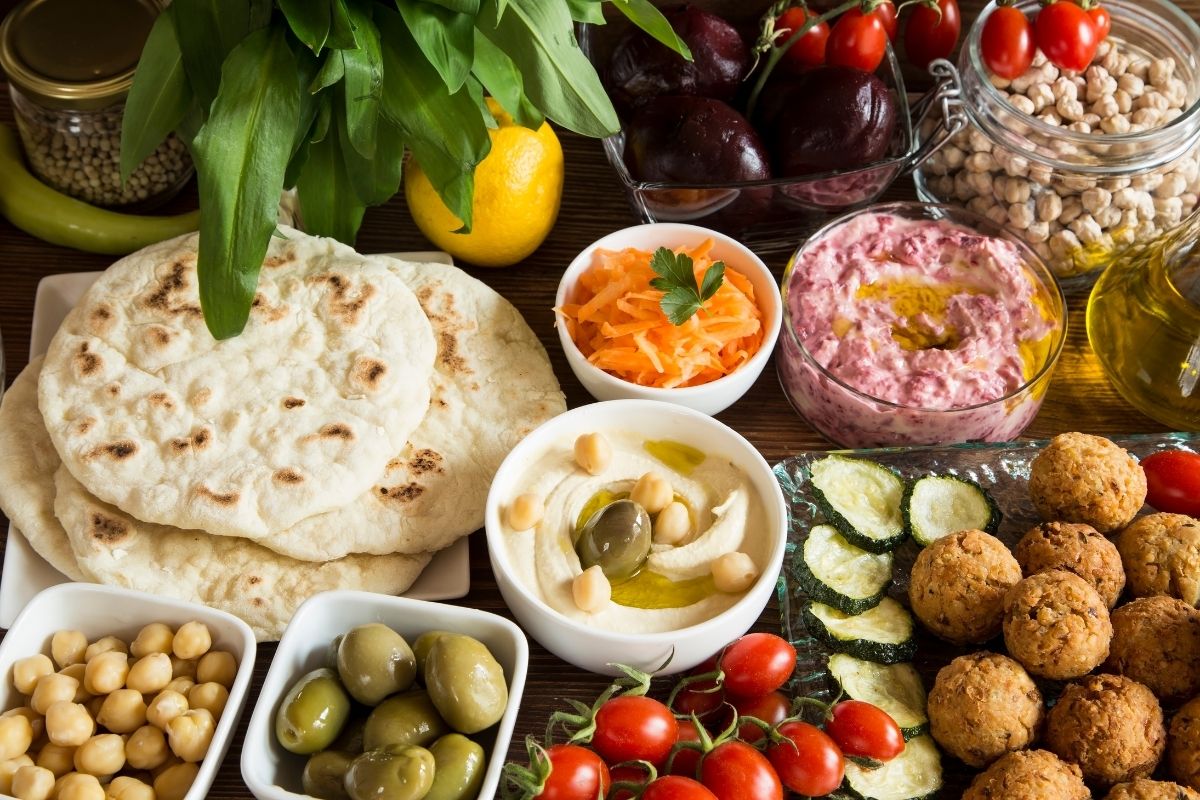 Two pea recipes back-to-back? What’s up with that? I can assure you there are very different ingredients and tastes. This recipe adds pea falafels and charred sugar snap peas to the mix.

The recipe calls for frozen peas, chickpea flour, and snap peas to be added to the normal homemade hummus mix. The instructors require mixing the peas, flour, and spices in a bowl while toasting the sesame seeds and adding them to the pea mash. Next, roll the mixture into balls and shallow-fry the falafels until brown.

Finally, add the peas and sugar snap peas into a pan with olive oil until charred then top the hummus with these ingredients! The result is a crispy, creamy, and healthy snack!

Turn Up the Heat Carrot Hummus

I like things a little spicy, so this recipe is my jam. The touch of honey provides just the right amount of sweetness and the spicy sriracha delivers a delicious kick. This recipe is so tasty, it may now be my favorite new snack since I can’t take my hands off it!

Since this Turn Up the Heat Carrot Hummus is veggie and protein-packed, it’s completely guilt-free and couldn’t be easier to make! You basically mix the garlic and carrots until minced, add the rest of the ingredients until smooth then slowly add water until your desired texture is reached! 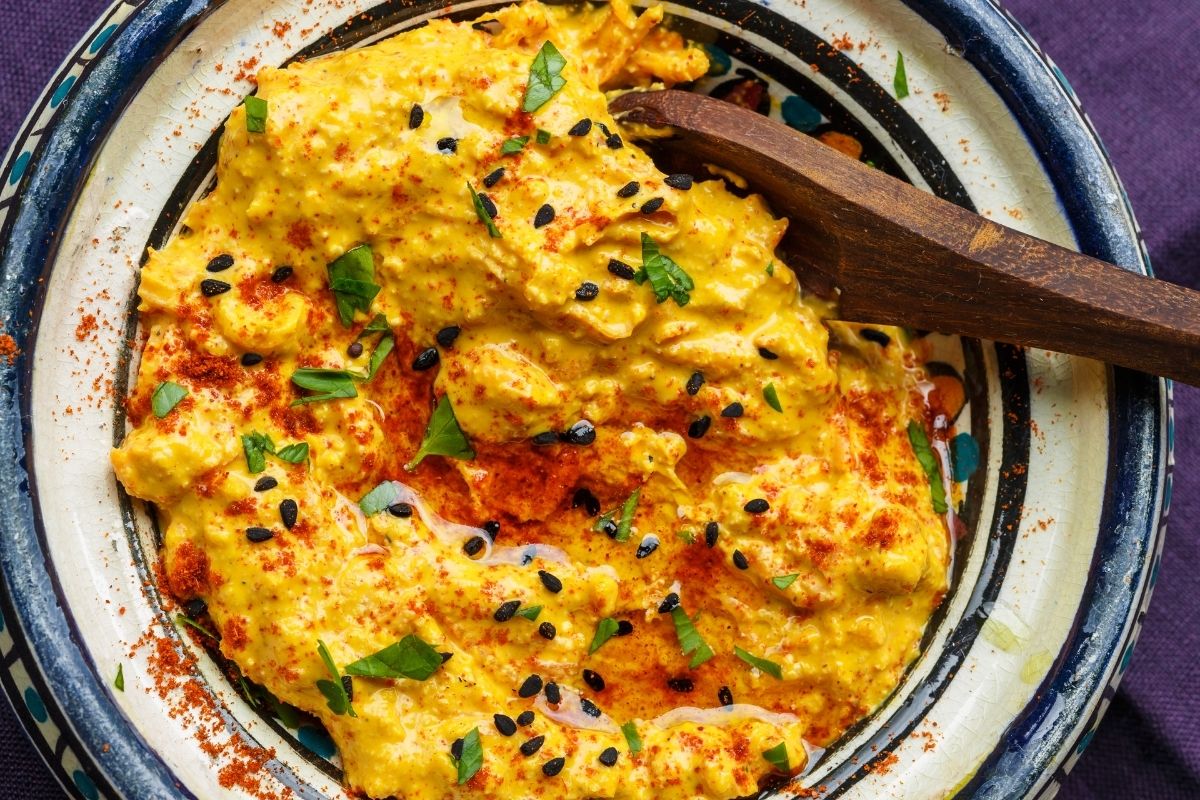 Hummus is considered a blank canvas in that almost every version has base ingredients, but you can add as many ingredients as you like, including interesting and unique combinations. Curry is used across a variety of dishes that I love. When blended with hummus, the curry adds that exotic flavor that kickstarts the taste buds!

In addition to sprucing up the hummus flavor, adding sweet potatoes gives the recipe a balanced sweetness while adding a boost of nutrients. Best of all, this is a quick and easy concept that packs considerable texture, color, and flavor. Finish the recipe by topping it with toasted cashews.

By slowly roasting the tomatoes at a low temperature, all their flavor complexity and sweetness are released and preserved for several days. Adding the almonds as a topper further elevates the flavor. This recipe uses the standard hummus ingredients while adding cherry tomatoes and skin-on almonds to the mix. 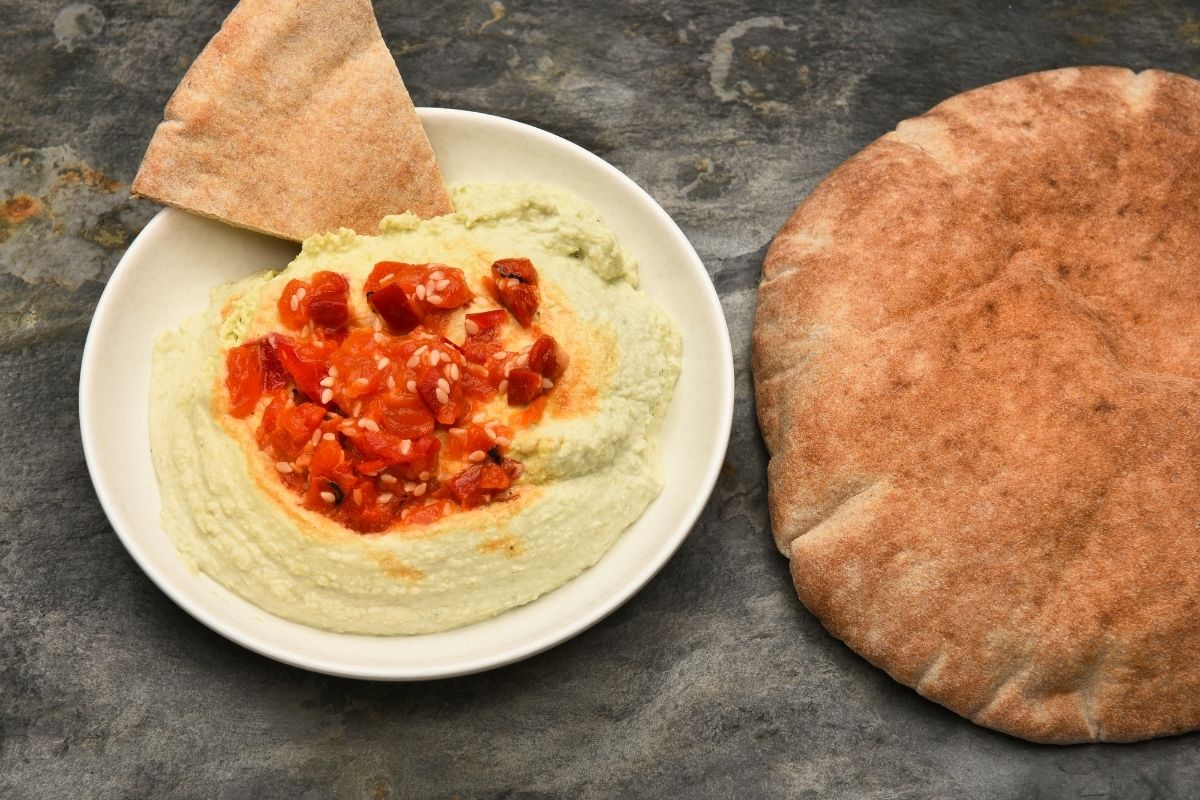 Making traditional hummus with chickpeas can be challenging to get the flavor, texture, and smoothness perfect, especially for those new to the homemade hummus game. However, by replacing chickpeas with edamame, you have more control over these dish characteristics. This Exquisite Edamame Hummus recipe is identical to traditional hummus only using edamame, which boosts the flavor while adding nutrition. 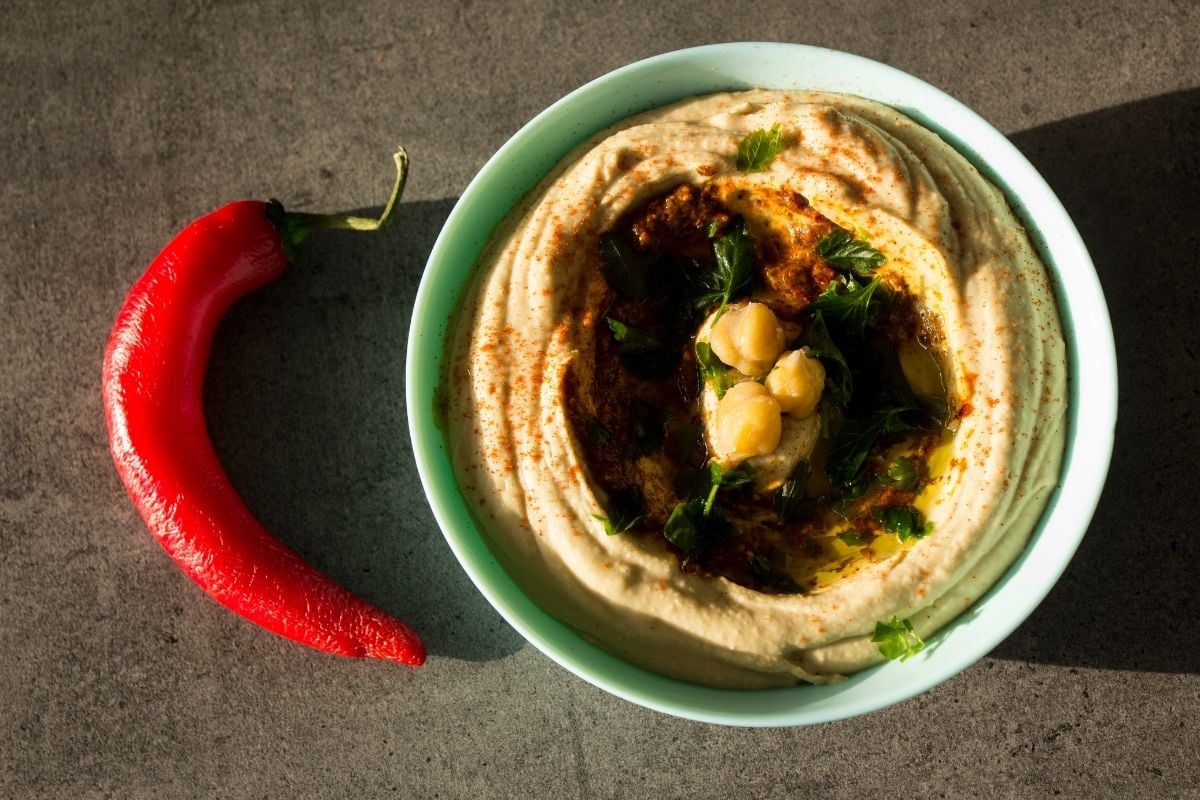 Since I love spicy food so much, I’m adding another hummus recipe with a kick to this roundup. This Remarkable Roasted Jalapeno Hummus recipe is inspired by Mexican cuisine flavors like lime, cumin, cilantro, and avocado, all of which are delicious and nutritious. The recipe requires you to roast the jalapenos in the oven until partially charred.

Next, mix all traditional hummus ingredients into the blender and finish by adding water to achieve the desired consistency. 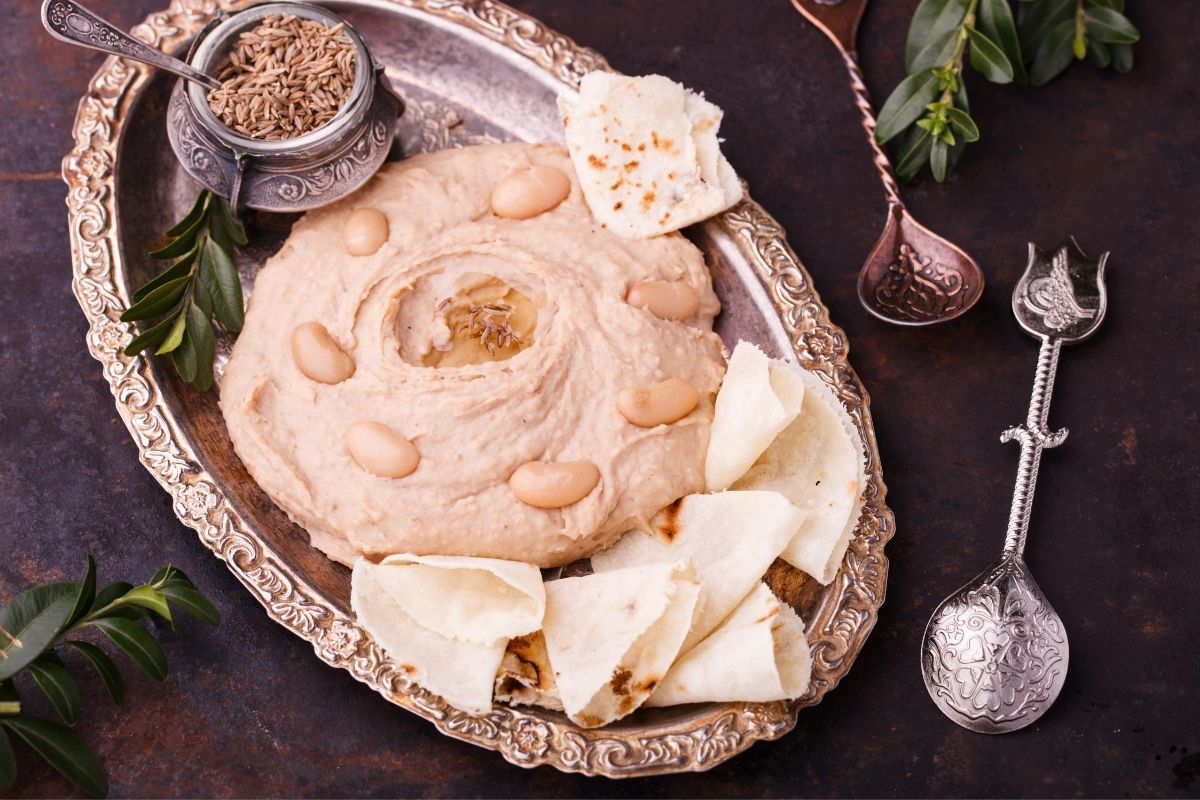 This BBQ White Bean Hummus recipe can be created in as little as 20 minutes. Instead of using traditional chickpeas, this recipe calls for white beans, which are much creamier when blended and milder in flavor. In addition to being incredibly creamy and smooth, this recipe is fat-free since there’s no tahini or oil.

This allows you to indulge as much as you want! The not-so-secret ingredient in this recipe is the BBQ sauce drizzled on top, which adds a smokiness to the hummus!