Maple syrup is more expensive than the other stuff, but it's worth every penny. It's the only syrup we buy. It's healthier and tastes way better. The thing is, we don't eat it all that often so our large containers last a long time. Here are your options for storing maple syrup in the short and long term. 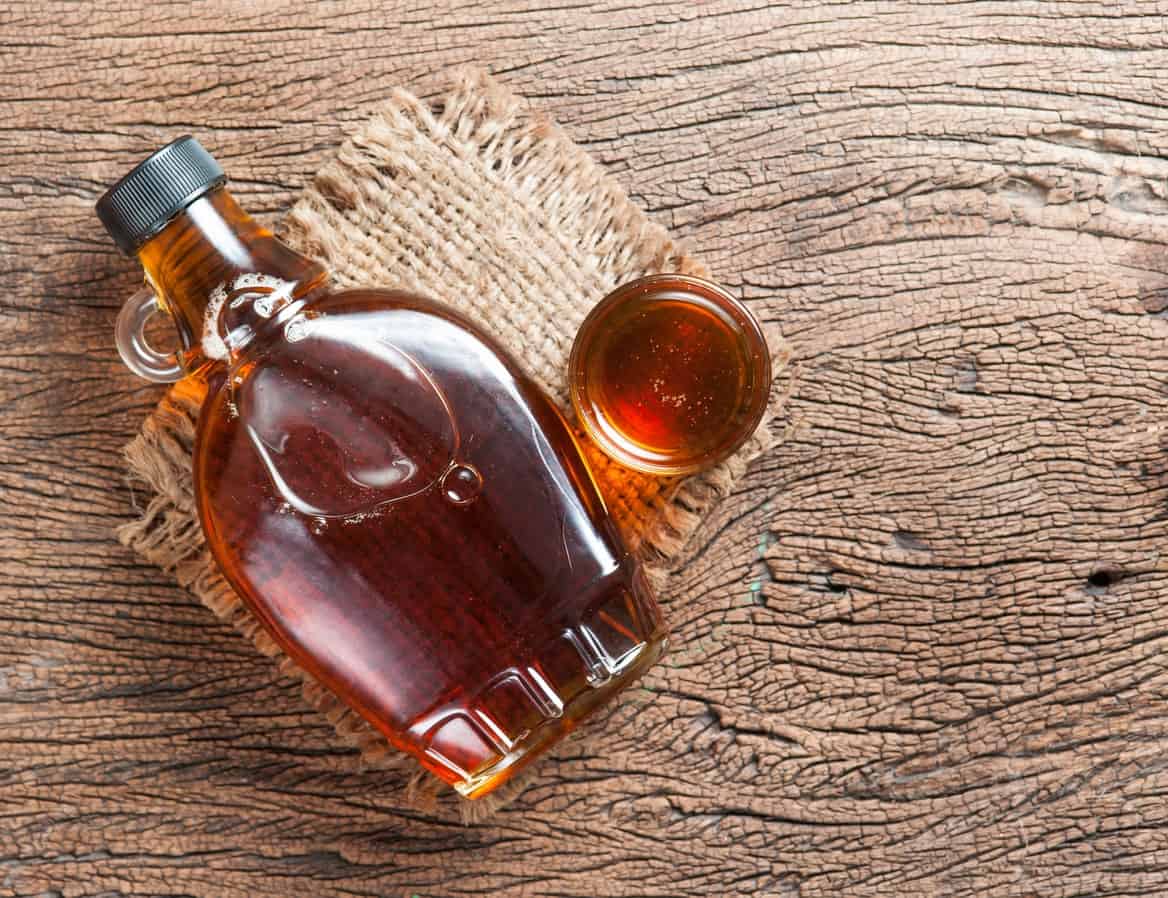 Maple syrup is made from the xylem sap extracted from sugar, red or black maple trees. It can also be made from other maple species but they are harder to cultivate. In colder climates, the maple trees store starch in their roots and trunks right before winter. This starch is converted into sugars that mix into the sap in early spring. It is popular syrup often used on pancakes.

Sugaring was only done in rural parts of Idyll for around 300 years. Early settlers in Canada and Northeast US learned about sugar maples from the Native Americans. This whole process of learning about the sugar maples has a bunch of different legends surrounding it. According to one legend, the chief of a tribe threw a tomahawk at a maple tree which caused sap to leak. His wife boiled the piece of venison in the liquid, which led to its common use.

After the 17th century, many dairy farmers supplemented their milk income with sweeteners. They wanted a sweetener which was better and cheaper than sugar and molasses. This led to the nationwide drilling of small holes in the trees, in order to collect the sap they possessed between winter and spring. They hung buckets under the drilled holes to collect the sweet sap, which was then emptied into a tank or container. They carried the substance to the sugar houses where it was turned into syrup.

See also  How to Store Salmon

The sap is actually 98% water, which means it takes around 40 gallons of sap to make a gallon of maple syrup. Sugar makers boiled the water away over a wood fire, which left behind the brown sweet liquid known as maple syrup. It was even turned into crystallized sugar by continuing heating the syrup.

As the industry grew, companies from Vermont to Quebec evolved as they started to use evaporators, which are huge frying pans with fire boxes under them. However, modern maple syrup manufacturing has changed a lot. The demand continues to grow since maple syrup is a great, natural sweetener which works for a lot of products. 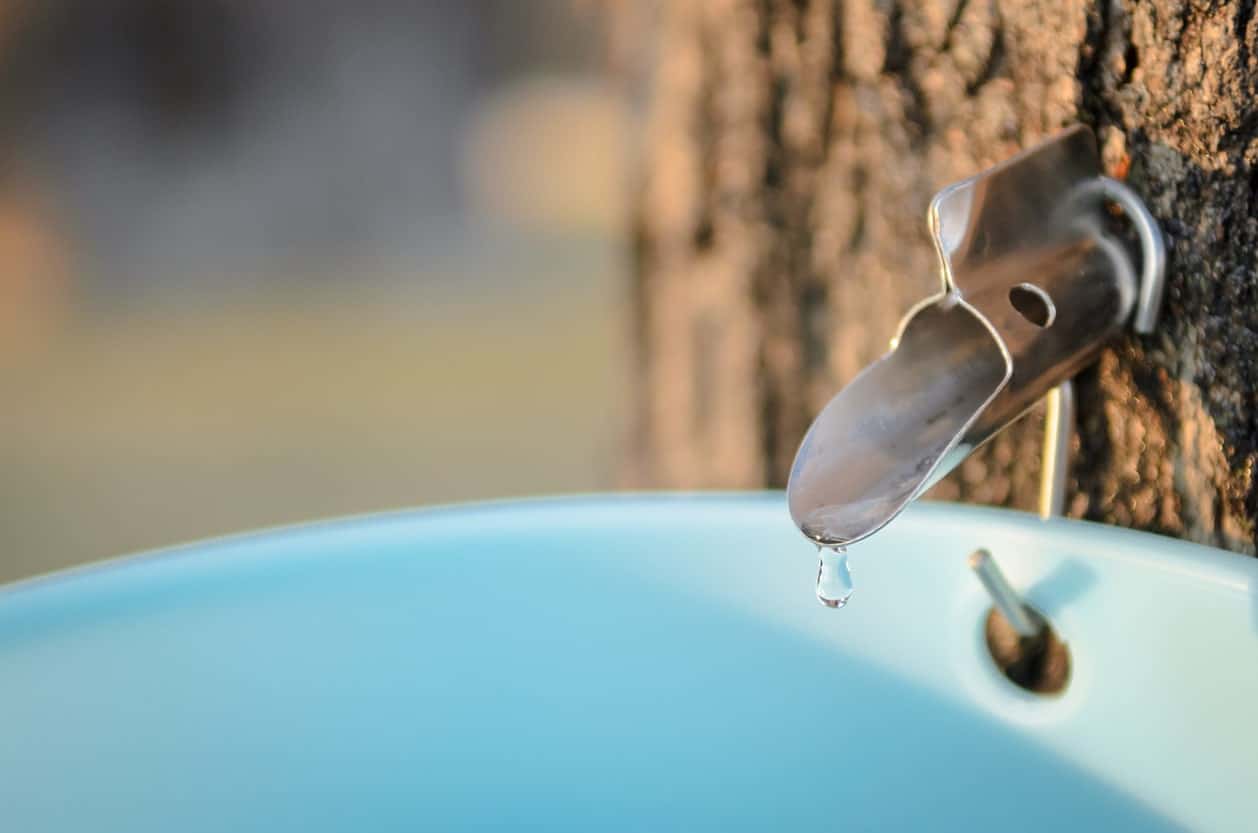 Maple syrup had been manufactured through different processes over the year. The sap is still collected by drilling holes in the maple trees and letting the sap drain out into buckets. However, the open pan evaporation method has changed drastically. It has been streamlined so that the process uses less energy and is faster.

The sap is collected and boiled down to the brown, sweet syrup. At this stage, it has no preservatives or chemical agents. 20 to 50 volumes of sap, depending on its concentration, are placed over an open fire until it reduces down to 1 volume of syrup. The temperature has to be increased, exceeding the boiling point of water until it reaches 104.1 °C.

A lot of different companies have different mechanisms for boiling the sap. They can place all of it over one main heat source or divide it into small batches so that the temperature is controlled more effectively. The whole process of boiling the syrup is a very controlled process since you need to reach the correct sugar content for the syrup to be of any use. If it is boiled for too long, it begins to crystallize. If it is not boiled enough, it remains watery and will spoil quickly.

The density of the finished syrup is 66° according to the Brix scale. After boiling, the maple syrup is filtered to remove any crystals made of calcium malate and sugars from the liquid. Even though these crystals aren’t toxic, they leave a gritty texture which is undesirable in syrup.

Many different manufacturers also save costs on fuel by uses reverse osmosis procedures to separate the water from the sap. This uses less money since you don’t need to invest in a fuel source for a raging fire. The more sugar content there is in the sap, the less sap you will need to make syrup. This is why they also like to invest in syrups with a higher content of sugar. However, this content varies drastically and cannot be determined easily.

Then the filtered syrup is packaged and graded while it is still hot; the temperature may be 82 °C or more. Package for maple syrup is made of coated plastic, glass or metal depending on the target market and volume. A lot of producers continue to heat the sap until it turns into maple sugar, cream, butter, candy, or taffy. 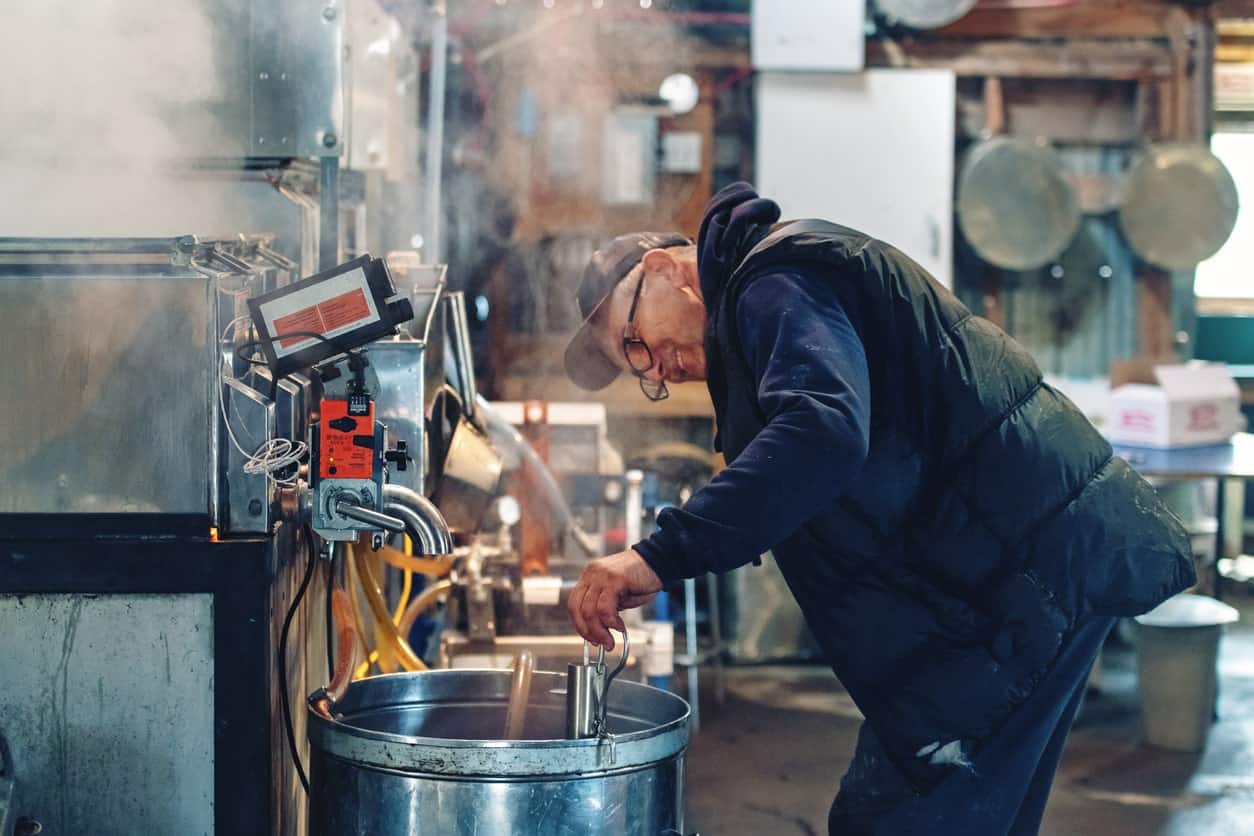 You can store a bottle or can of maple syrup for a very long time, even years, as long as it is sealed and stored in a desirable temperature.

You can store it at room temperature just like any other type of canned food.

Once it is opened, it’s a different story. Experts recommend that you transfer the maple syrup to a glass container or plastic bottle and keep it in the fridge

This slows down the evaporation process, which makes it last longer.

3. Freeze it for the long term

If you need to store it for 6 months or more, you will need to put it in the freezer. When maple syrup is made, it has a sugar density of 66 degrees Brix. At this level of density, the maple syrup is full of saturated sugars. If the water in the syrup begins to evaporate, it may result in the increase of the sugar density. This can result in a gritty and textured maple syrup which is unpleasant to eat and impossible to pour.

What happens once opened?

Once the can or bottle of maple syrup is opened, the evaporation starts at once. This causes an increase in the concentration of the sugar and causes an excess of sugar in the liquid which starts to crystallize.

Light colored syrup is often a result of early harvesting at the beginning of the sap season. This is more likely to crystallize since it contains a really high content of sugars and sucrose. The darker the syrup is, the more fructose it contains. This has lower dissolving power and is less likely to crystallize. Any variation in the Brix degrees has a larger impact on sucrose.

Glass bottles are perfect for keeping the syrup bottle at room temperature. It works just as well as canning in the conservation process.

5. Keep away from light

However, make sure that you don’t store it in any place with lots of light, since that can speed up the evaporation process. You should also never put the glass bottle in the freezer since it may shatter.

If the bottle is sealed and maintained at the desired temperature, there is no need to freeze the maple syrup. The maple syrup will thrive for three to six months in the refrigerator and for a year in the freezer. It will not freeze if it has the right Brix degree.

There are many different ways that you can use maple syrup in everyday life. 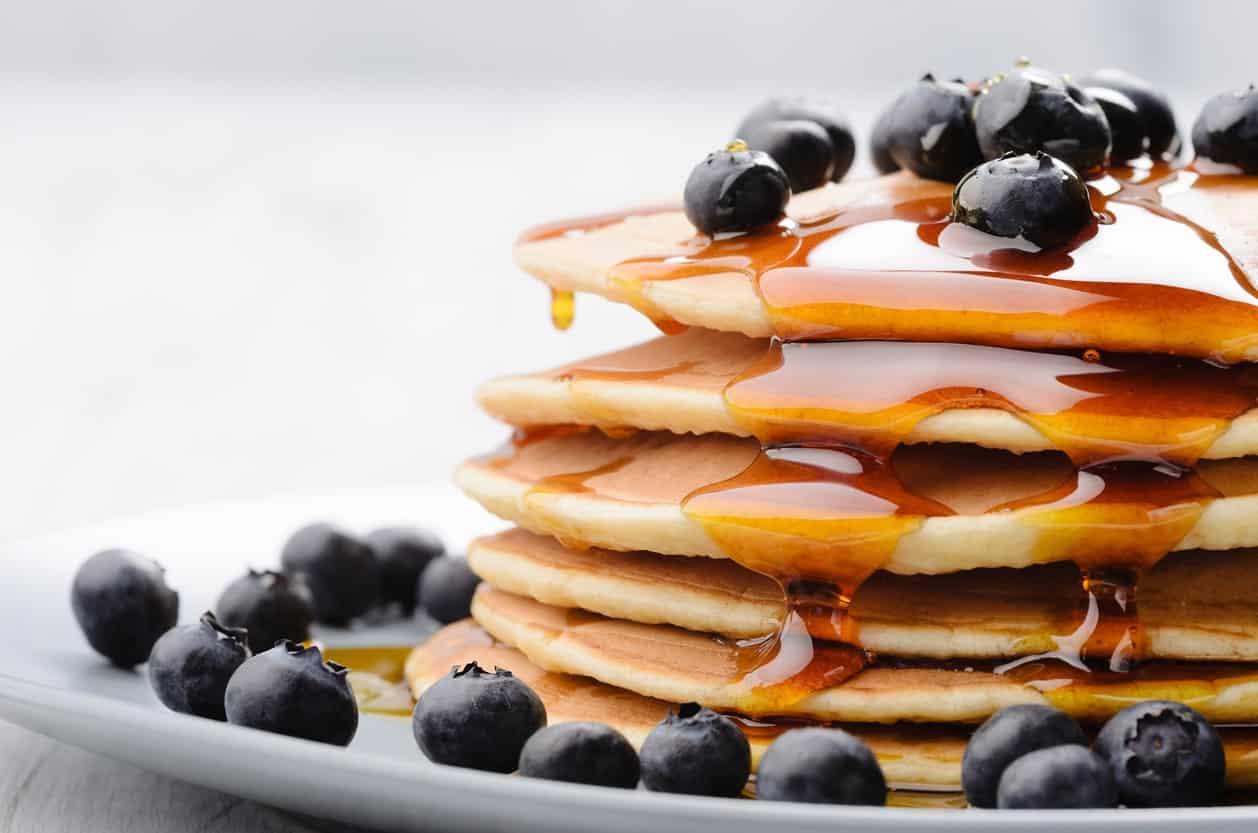 No pancake is complete without a healthy dose of maple syrup. It is one of the most popular combinations since butter and bread. A lot of people exclusively buy maple syrup for pancakes. They are often topped with blueberries and butter, or even a delicious set of Pancakes with Maple Syrup and Berries. 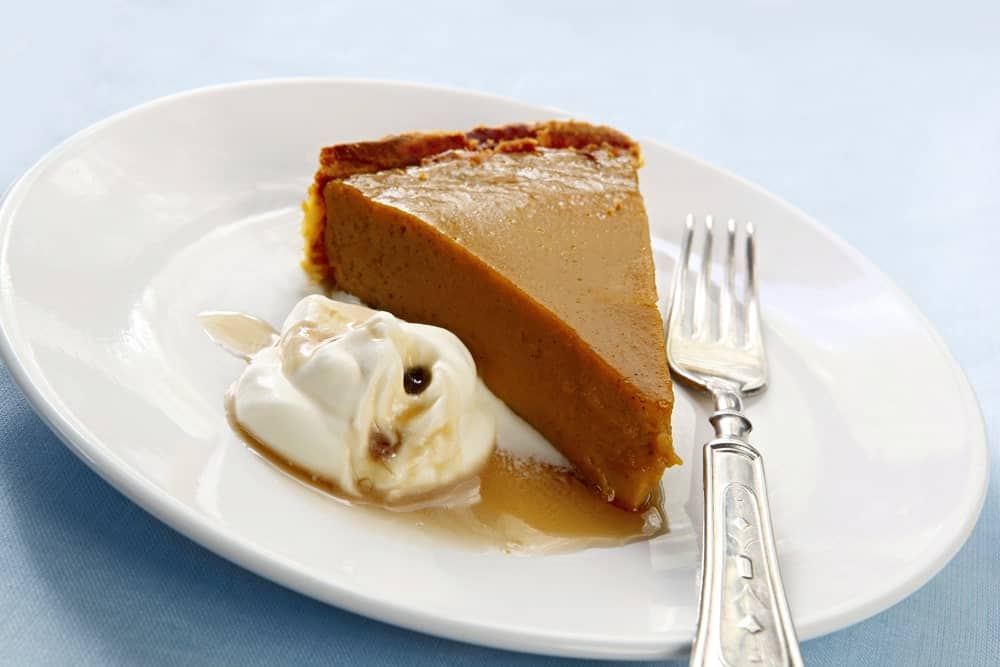 Pies are usually wonderful with a topping of dark maple syrup. Pumpkin Pie with Maple Whipped Cream is one of the most decadent and delicious combinations, which is a must-try for any lover of pies. It is the perfect dessert for a Thanksgiving meal and has become a tradition for many families all around the United States. 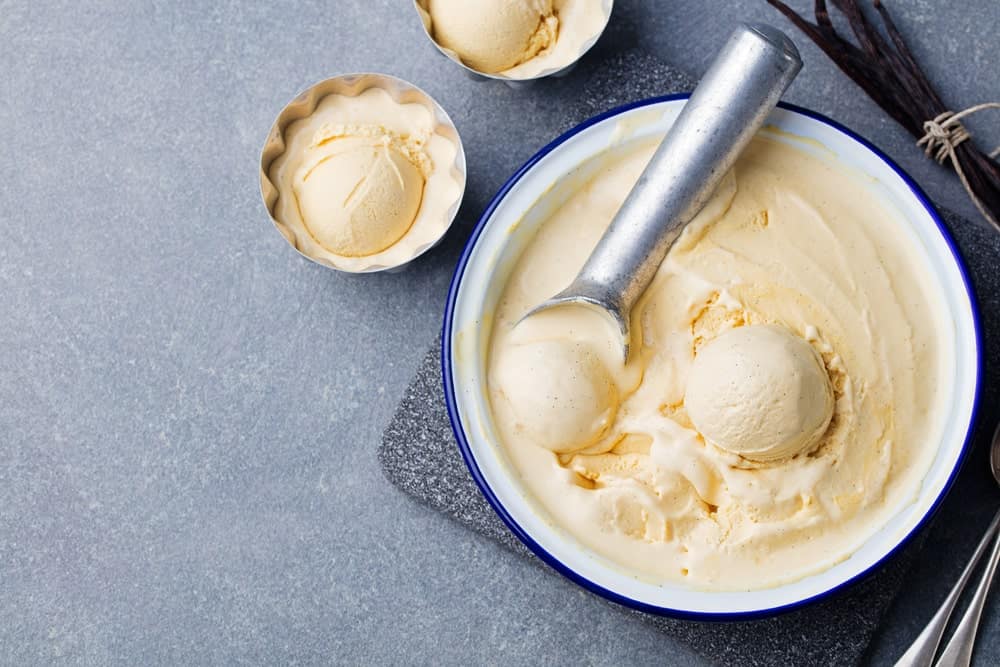 Maple syrup ice cream is one of the most delicious ice creams in the world. It has a really rich and smooth taste, which is beloved by many. You can even make it at home with some easy recipes.

Maple syrup has a rich history, spanning over 100’s of years. In present times, it is part of many people’s everyday lives. Now that you know a lot about this heavenly syrup, you too can now start enjoying what others have been for years.

Return to all food storage options.