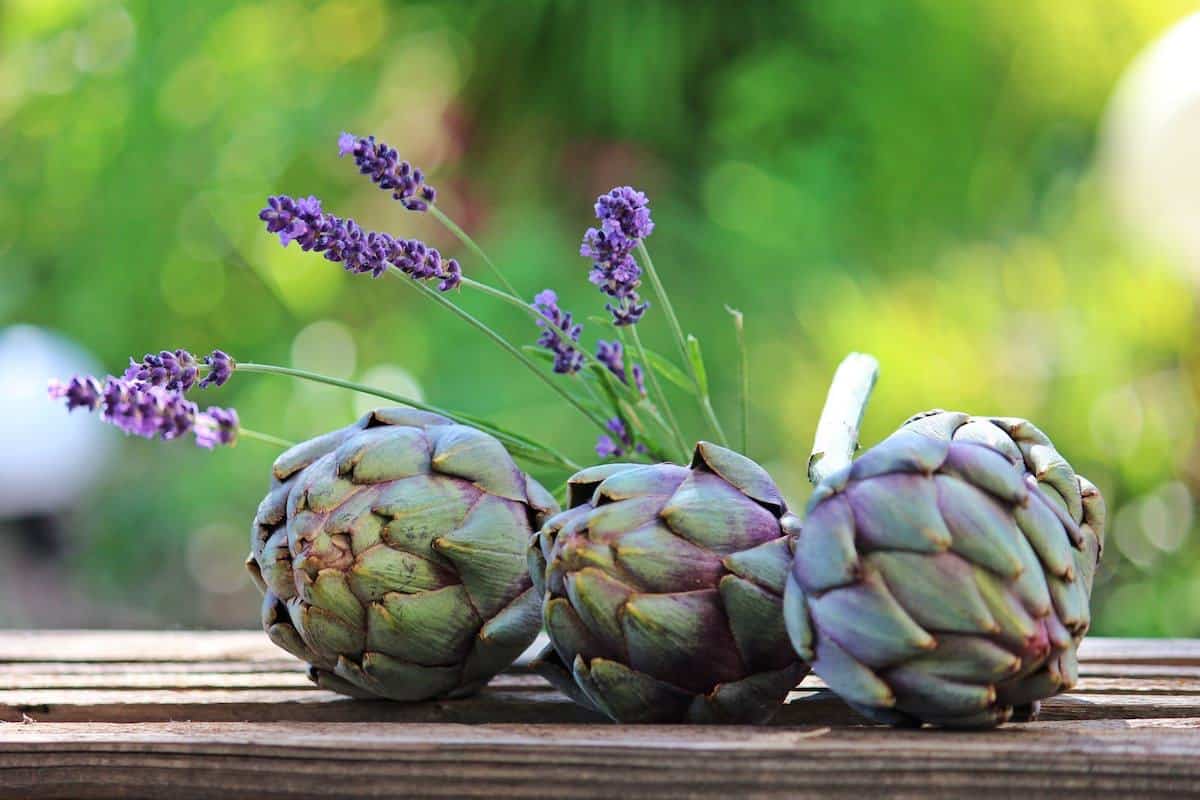 Learn the options for storing artichokes as well as how to prepare them for storing via several storage methods.

Artichokes are a really popular vegetable nowadays. They are used in a lot of different recipes all over the world. However, it is important to learn how to store artichokes properly if you want to use them in the kitchen so that they remain fresh and delicious. A lot of people don’t know how to treat and store artichokes properly, which is why it is important to know the following things.

One of the oldest records of artichokes was by Theophrastus in 371-287 B.C. He wrote about them being cultivated in Italy and Sicily. According to Aegean legend, artichokes first appeared on earth when Zeus cast Cynara to the land and converted her into a plant as punishment. Artichokes were later used in 40-90 A.D. by Pedanius Dioscorides as a medicinal product. He wrote about it in the Greek Herbal of Dioscorides as a remedy and remained as a medicinal plant for over 1500 years.

They were considered as an aphrodisiac and delicacy by the Ancient Greeks and Romans. It was also believed that eating artichokes would result in the birth of a male heir. In the old days, artichokes were prepared with cumin, vinegar, and honey, and considered as a treat by many. The plant soon spread to all corners of the land through Arab traders and merchants. It was improved by the wealthy monastery gardens between 800-1500 into the plant we know of today. 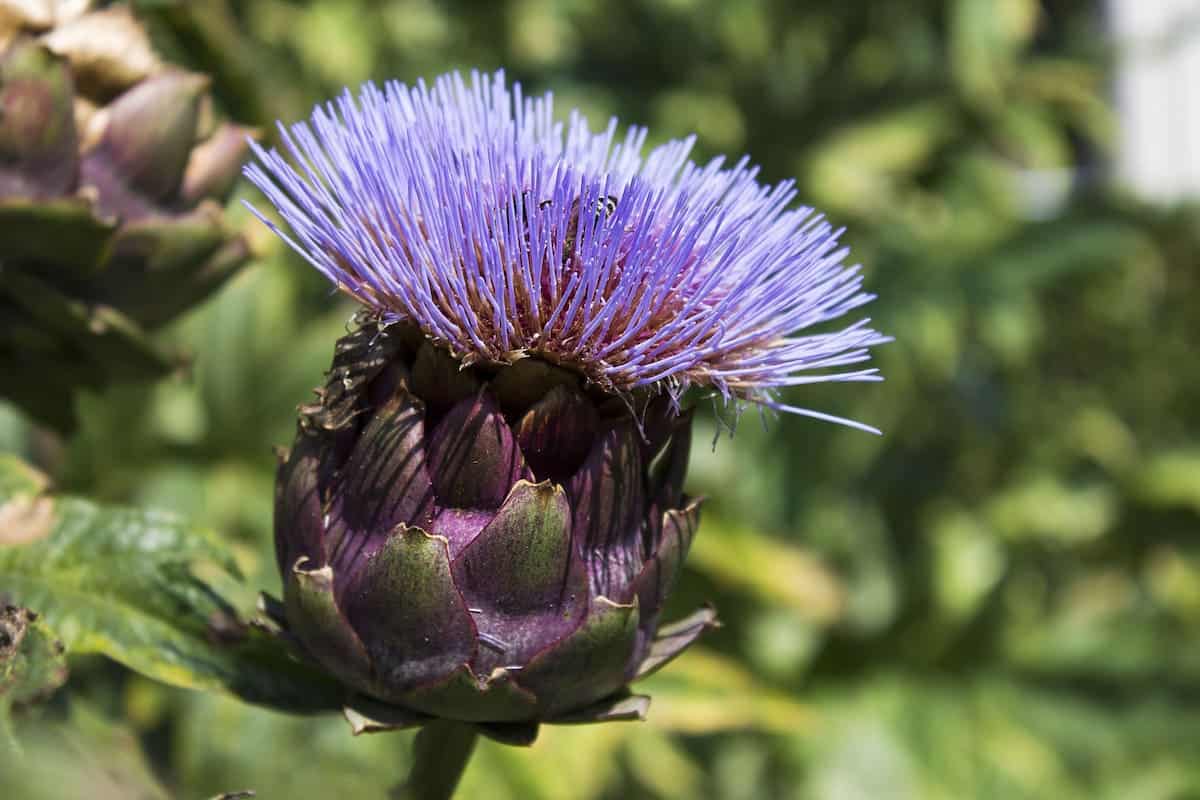 Artichokes thrive in a combination of full sun and partial shade. These plants can grow in the site for up to 5 years, flowering every season. To allow them to fully bloom, you have to give the plants plenty of room to spread. These plants need lots of fertile, light, well-drained soil; you can use sandy or loam soil to grow artichokes.

The two biggest reasons that artichokes fail is that they can be caught up in the summer drought or planted in winter soil, which is waterlogged. This can harm their ability to grow properly, which is why it is important to add compost since that improves the soil’s ability to retain water in summer and drain in winters. 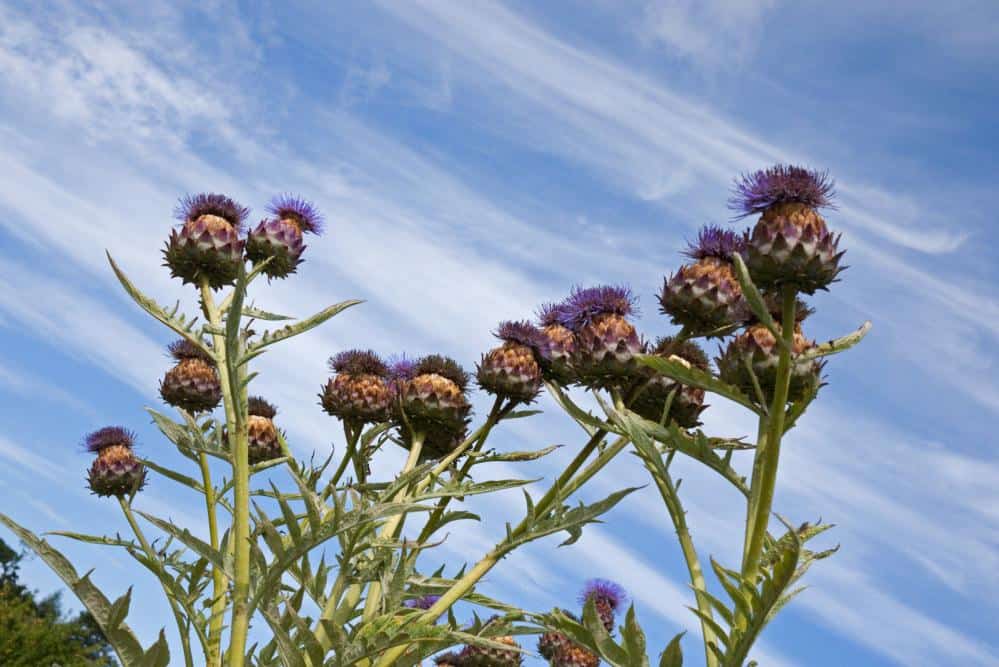 Artichokes are usually produced on a massive scale from seeds or other vegetative methods like micro propagation, root cutting, and division. The plant is a perennial, and it is normally cultivated in the second and subsequent year, but some types of artichokes are grown annually with seeds. Commercially, artichokes are planted in warm areas within the hardiness zones 7 or above. They need good soil to thrive and plenty of feeding and water. They need to be protected from frost in the winters, which is why it is a good idea to plant them in areas where winters are too strong.

Most big farms plant rooter suckers each year so that mature plants can be removed after a few years. Artichokes are harvested during the summers when they begin to flower. A lot of farms also continue to harvest them well into the summer season and even mid-autumn. 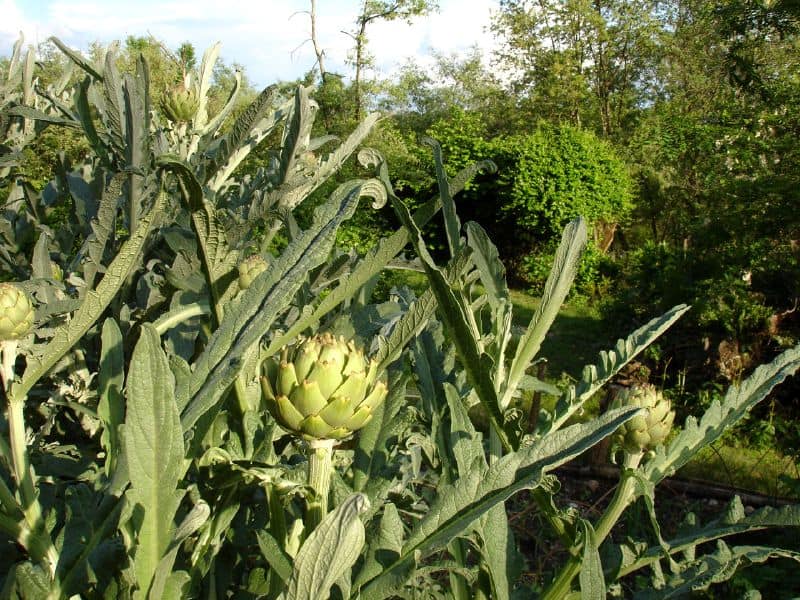 In order to harvest the artichoke plant, you have to watch it carefully for the right conditions. Farmers wait for such conditions so that the plant doesn’t become stressed. To harvest the artichoke, you need to cut off the bud along three inches of the stem. Jerusalem artichoke tubers are usually picked right after the frost is gone. These tubers are dug from the ground before they are harvested. Farmers continue to feed and water the plant in wait for the next season. They trim the plant and feed it with mulch. If you miss the harvesting period, then the artichoke begins to flower. This purple flower is cut for arrangements and bouquets since it is a really pretty sight. 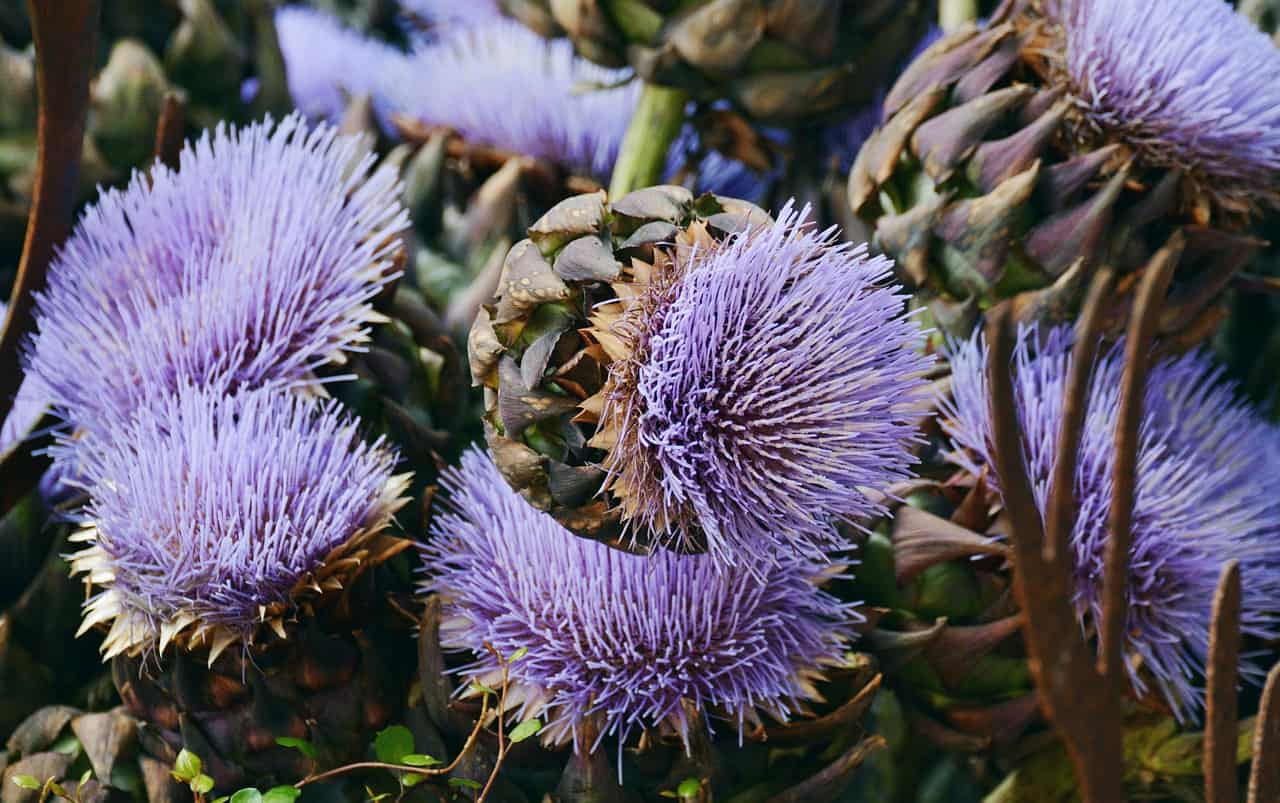 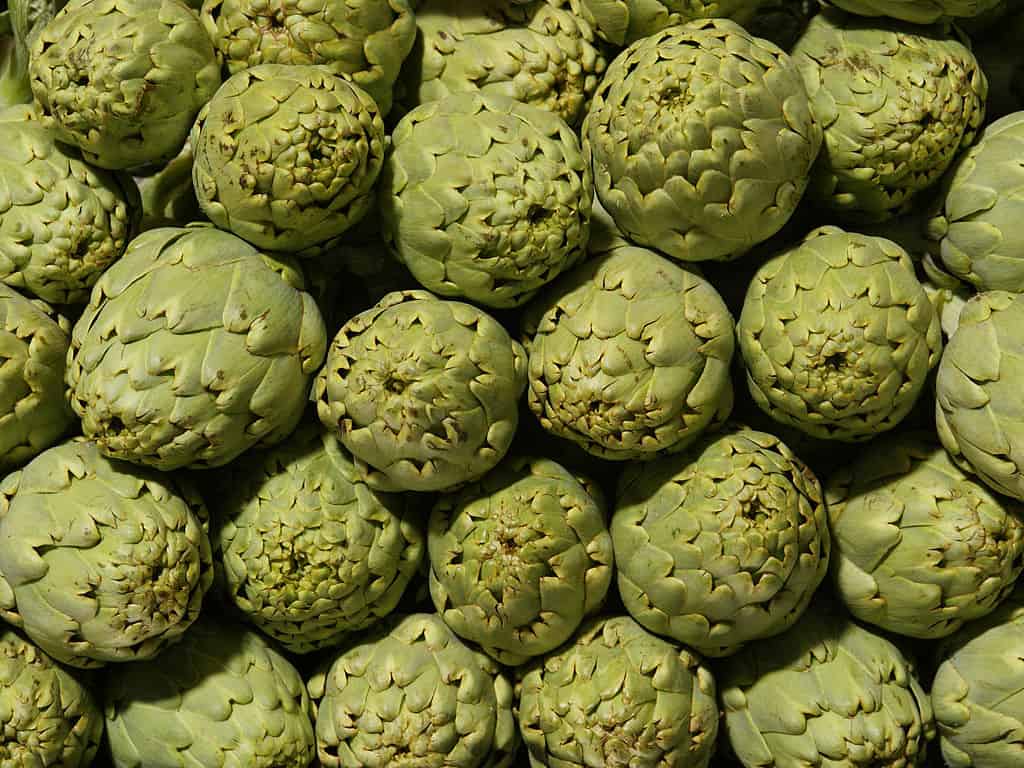 To buy the best artichoke, you have to first test the weight of the vegetable. A fresh, healthy artichoke will feel heavy and firm, even if it doesn’t look like that in size. You may need to compare it with other artichokes in the pile to make sure that it is a good weight for its size. Lift the vegetable and test its weight against others. You can also choose baby artichokes, which are just as tasty as bigger ones. They won’t be as heavy as the bigger ones, so compare these to similar size artichokes. 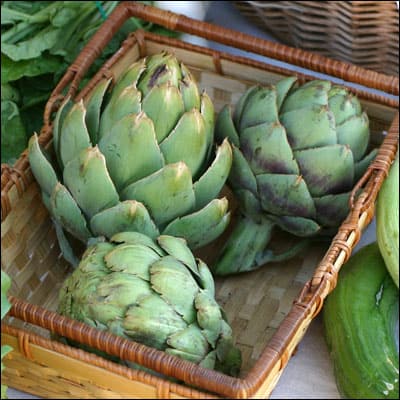 The leaves of the artichoke can also help you find the freshest ones in the bunch. Green leaves that are tightly packed are a sign for healthy, fresh artichokes. They can have purple undertones since that is natural, but any artichokes with brown colored tips should be avoided. Leaves that are dry, spongy, split, pitted, or loose signify overripe or old produce. When you squeeze the leaves, they should make a soft squeak sound, which shows that you picked a good product. They make this sound since the leaves are crispy.

If you get fresh artichokes, it can become easier to store them at home since they can be prepared easily.

Here are the main storing options.

Fridge:  Artichokes can’t be stored in your kitchen by simply putting them in the fridge.

Freezer: You can only freeze artichokes after they have been cooked in some way.

Raw artichokes:  If you try to store raw artichokes, they can lose their green color and give off a really poor taste upon cooking.

Canning: You can also can artichokes. In fact, other than buying them fresh, this is the main way to buy them in the grocery store.

There is a certain way that you have to prepare artichokes if you want to store them.

To prepare the artichokes for storage, you have to remove all the outer leaves, as well as the choke.

Wash the vegetable thoroughly in cold water before removing any excess water.

You can blanch the vegetable in two quarts of water, a tablespoon of ascorbic acid, and a half cup of lemon juice. The blanching process prevents any discoloration that may occur in the storing period. You only need to blanch the artichoke for a few minutes before taking it out and patting it dry with a towel.

If you are planning to freeze the artichokes, then you can use tray packs. Place the vegetable on any cookie sheets that you may have facing up. If you want to store the vegetable in dry packs, than you will have to transfer them to vapor resistant containers so that they do not crack under the low temperatures.

5. Steam them for storing

If you steam the artichokes before storing them, then you can store them wrapped in heavy duty aluminum foil. Put them into freeze grade plastic bags to freeze them. If you freeze them properly, they can last up to eight months in the freezer.

Storing fresh artichokes is a little different. Don’t rinse or cut the artichoke before storing. All you have to do is just sprinkle them with a little bit of water and put them in an airtight plastic bag. Seal the bag to keep the artichokes fresh for up to 3-5 days. However, artichokes taste best really fresh, so it is a good idea to cook them as soon as you buy them. 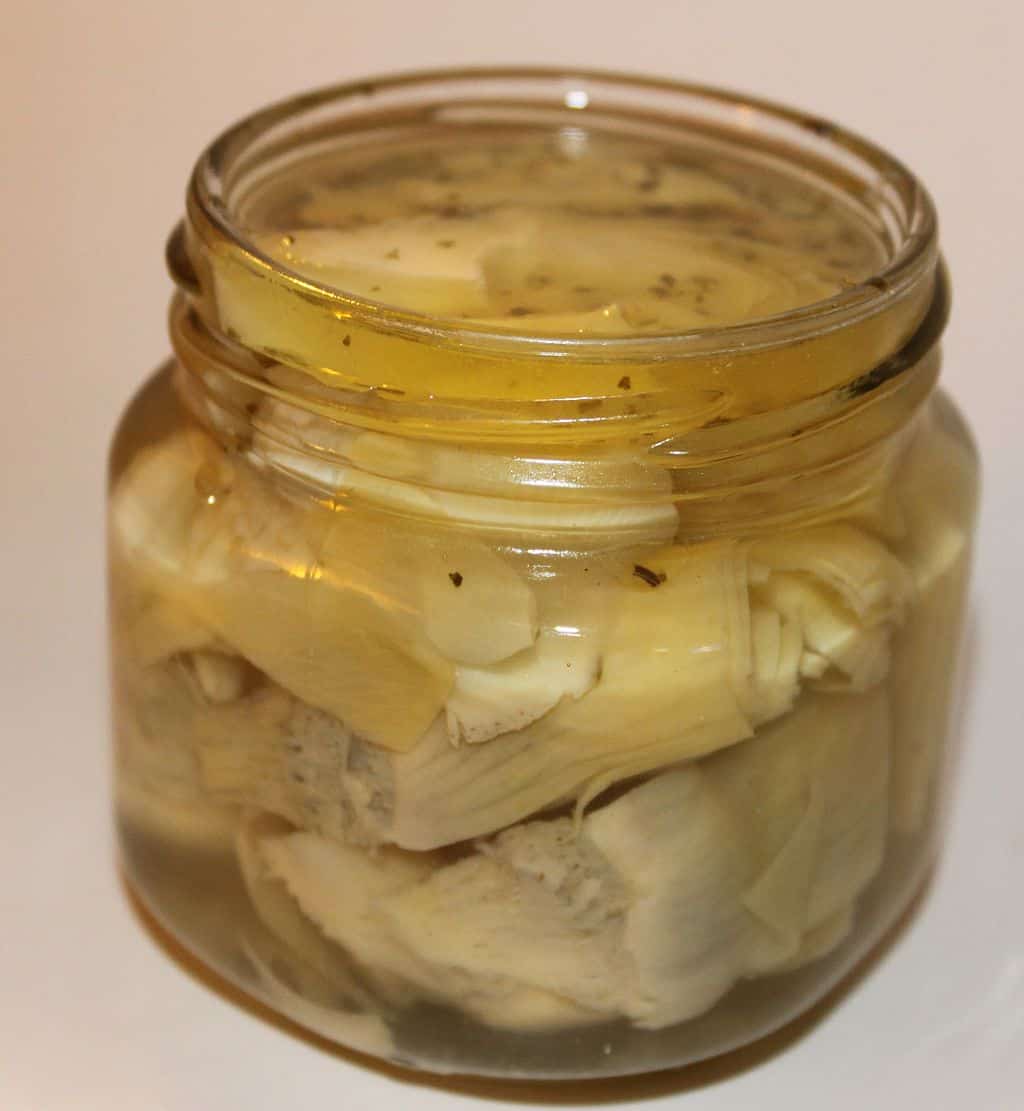 If you don’t want to go through the whole process of storing the artichokes, then you can simply purchase canned artichokes. They can be stored easily in the kitchen without any trouble. 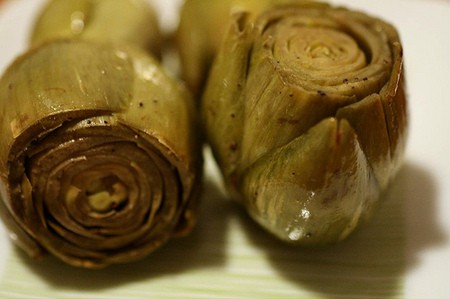 A sharp or serrated knife should be used to chop off the top of the artichoke. If you don’t plan on using the whole artichoke, keep in mind that it will begin to get brown in color. You can prevent the rest of the artichoke from browning by rubbing a lemon around the freshly cut edges and then storing it. 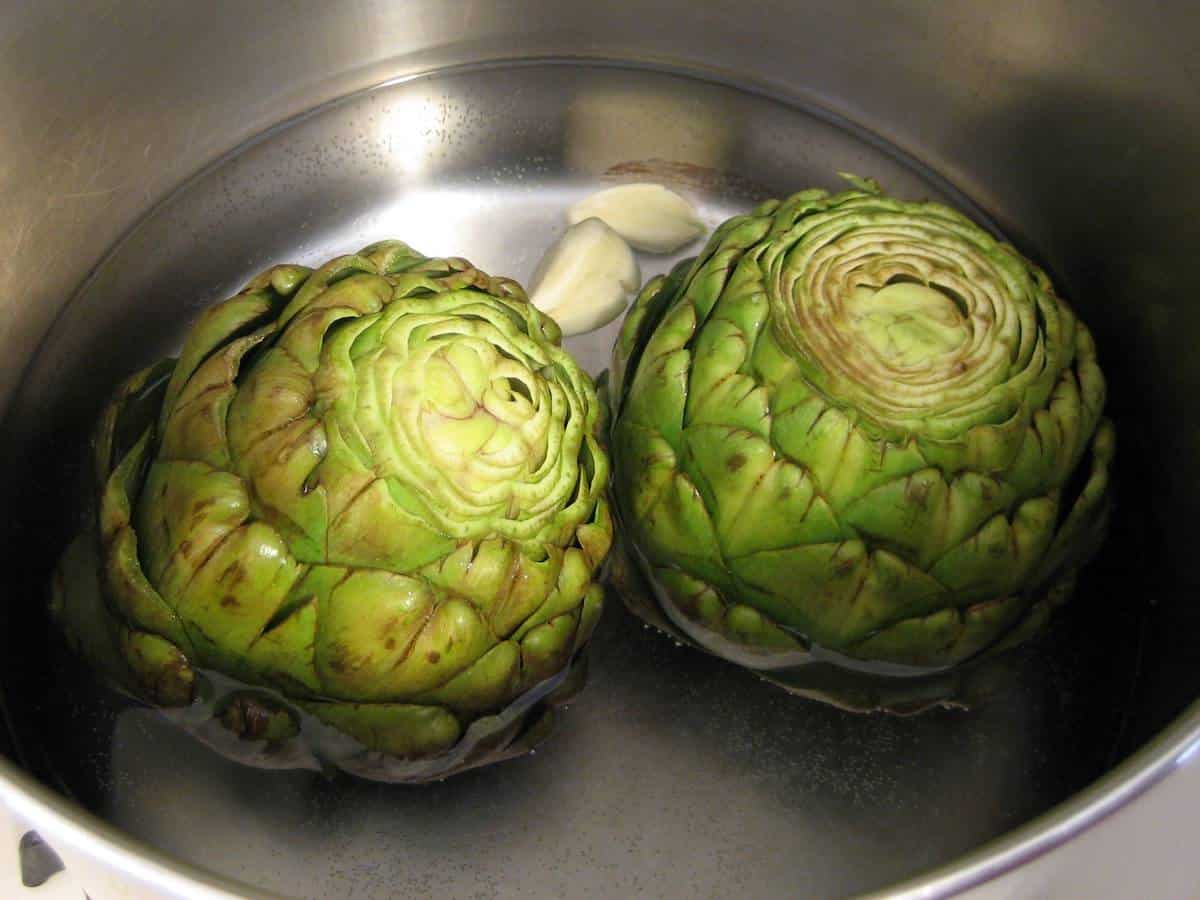 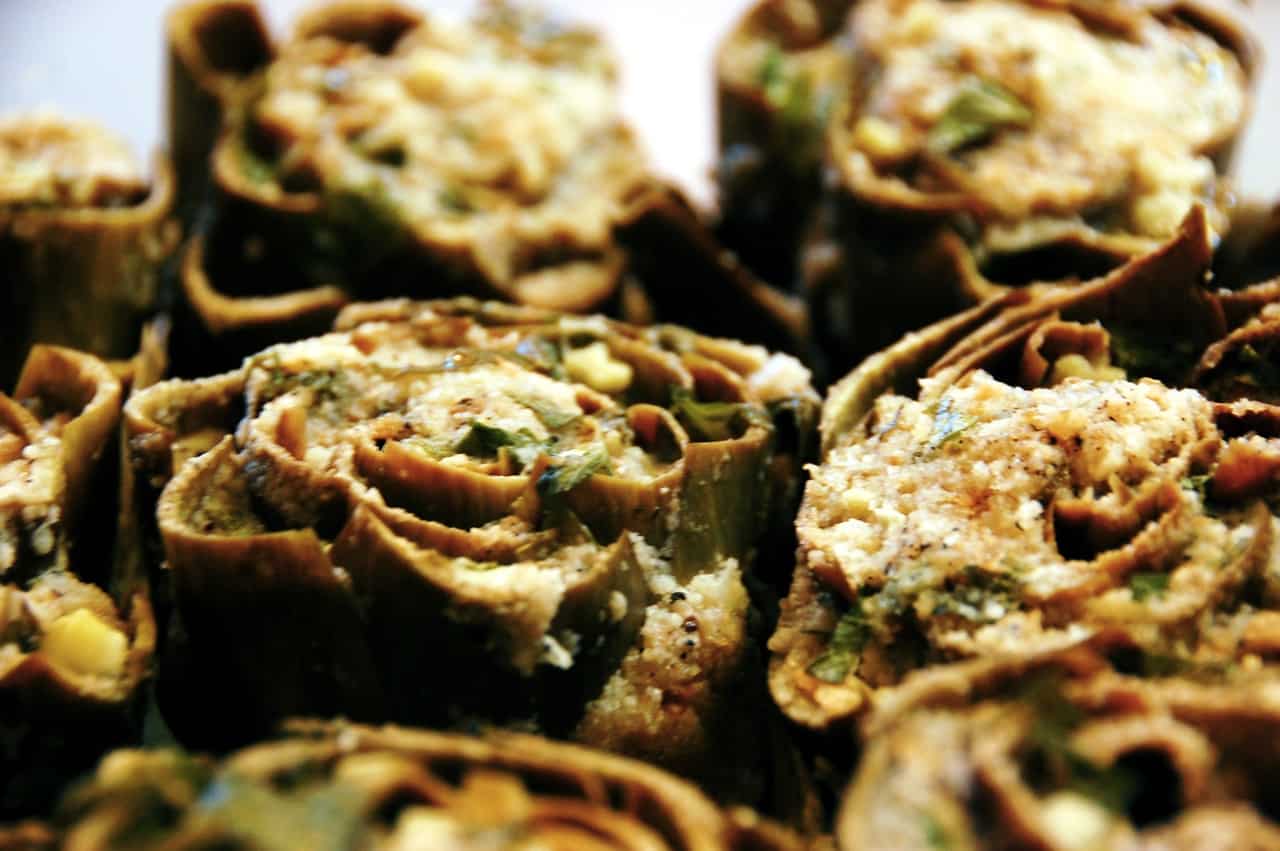 A simple, delicious recipe for artichokes is making the ever crowd-pleasing stuffed Artichokes. It is a recipe that is full of nostalgia and will definitely be loved by all. It is an Italian comfort dish perfect for any family gathering, be it Thanksgiving or a simple dinner. Fresh artichokes with a sublime drizzle of lemon juice paired with the garlicky, cheesy topping make it a divine meal. It doesn’t get any better than stuffed artichokes topped with garlic, olive oil, crispy bread crumbs, and cheese. It is full of flavor and the hearty artichoke is immediately everyone’s favorite. 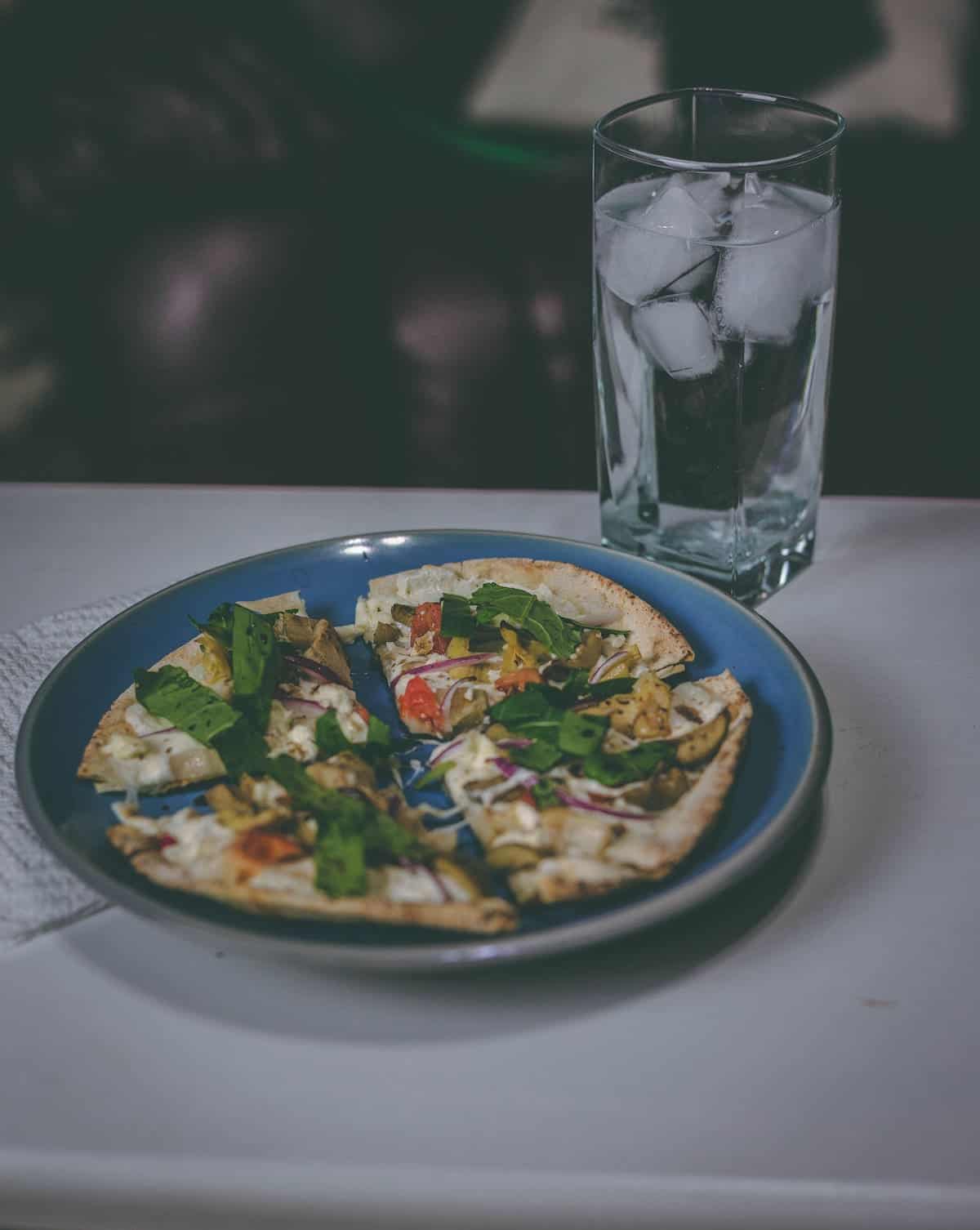 Spinach Artichoke Pizza is inspired by the much-loved artichoke dip. It is a simply perfect combination of crisp homemade pizza crust with mozzarella, parmesan, garlic, spinach, and of course artichokes. It is a creamy pizza that will leave you craving for more. Nothing is better than homemade, fresh pizza especially when it is topped with roasted garlic, fresh spinach, baked artichokes, and a sprinkle of black pepper. It has a delicious tomato sauce made with halved grape tomatoes that pair well with the mild, nutty taste of artichokes.