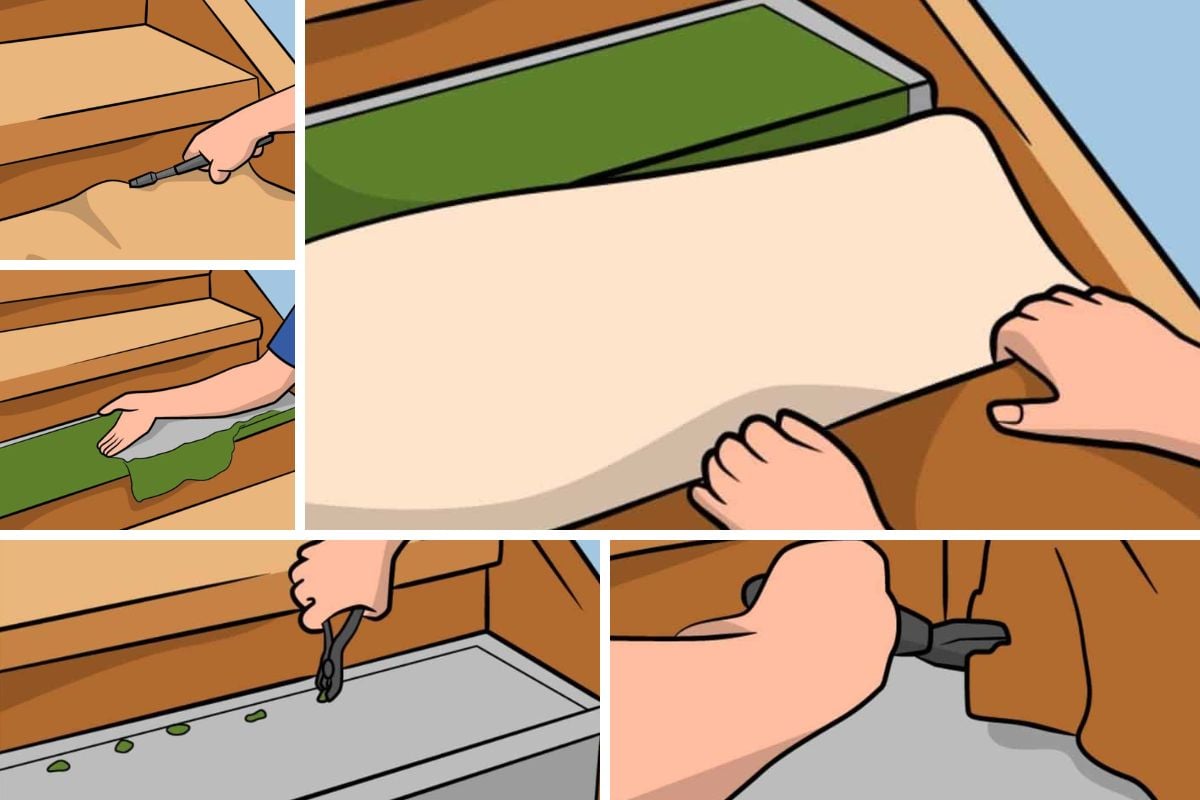 Replacing the flooring in your home is a great way to give the interior of your house a facelift. Carpets tend to show wear and tear before anything else, and carpeting on stairs often becomes shabbier sooner than in other rooms. However, replacing carpets is expensive, so any DIY part of the project homeowners undertake is an excellent way to save on costs.

Removing the carpet from the stairs is a task that is doable if you use the right tools and follow a detailed set of instructions. Set aside a morning or afternoon to remove your stair carpet, and be aware that you may encounter a few frustrations.

To successfully remove carpet from stairs, it is a good idea to determine how the carpet is attached and what surface is under the carpet. You may find rotting or infested wood or disintegrated underpads. If you tackle the project without knowledge and caution, this could damage the surface below the carpet.

You may also need additional tools to take on this project. Using a utility knife, make a small cut on the corner of the top stair and lift a small section of the carpet, underpad, and stringer carpet. Pull the carpet away from the step with a pair of pliers to get you a good idea of the condition of the underpader pad, tack strip, and stinger board.

Step 1: Cut Along the Seams of the Carpet 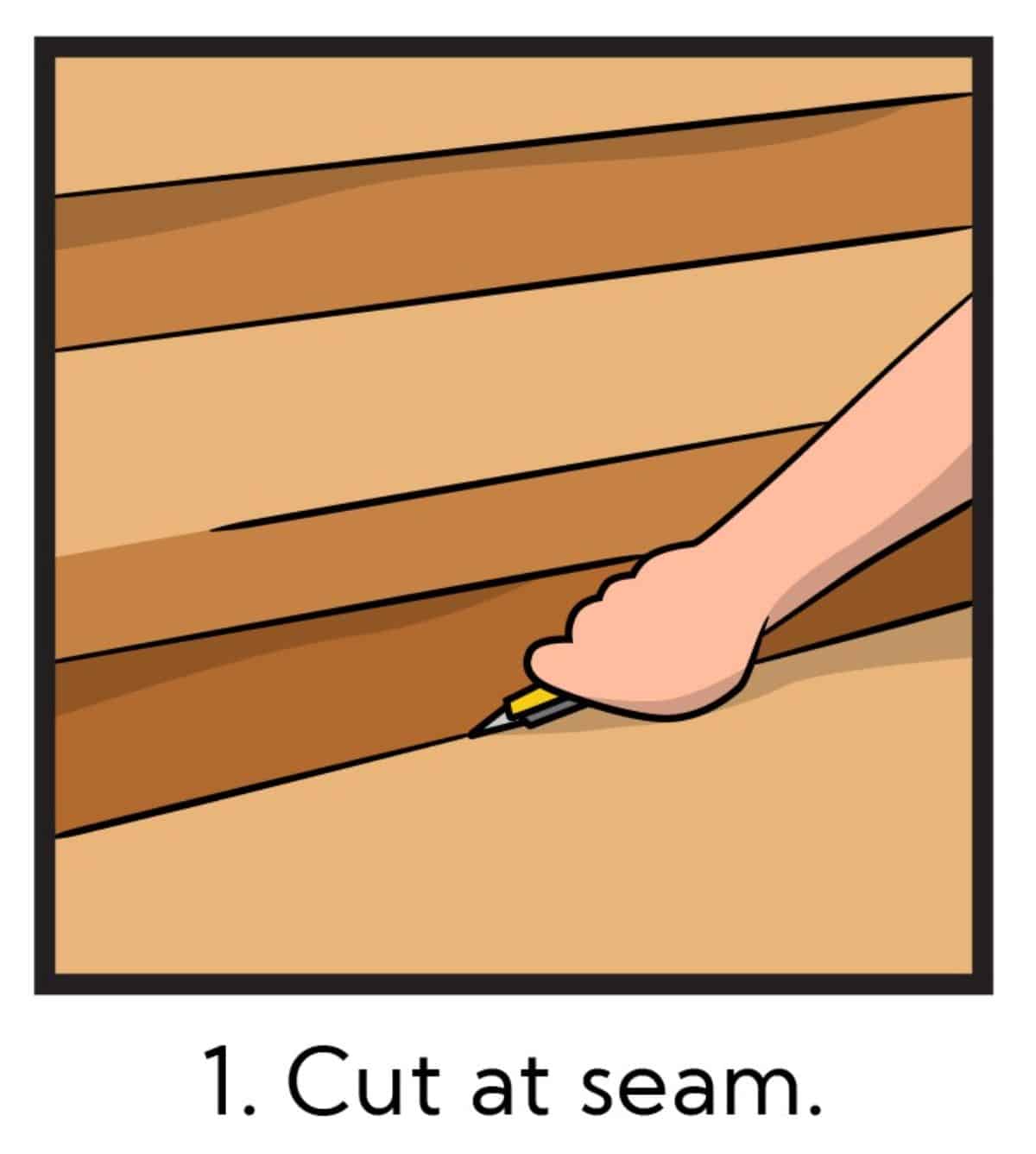 The seam of the carpet is where the step joins the riser, which is the vertical section that attaches one step to another.

To remove the carpet, you need to cut the seams of the carpet with a utility knife. Make shortish, controlled cuts along the seam, ensuring no
damage to the wood beneath the carpet. If your stair has a nose, the lip that juts out over the riser, loosen and cut this section separately. It may be necessary to cut along the same line more than once if the carpet is thick or coarse.

Top Tip: Work from top to bottom, which makes it easier to loosen, lift the carpet, and pull it off in sections and not just pieces. Keep your tools on the step above so they are easy to reach, and sit two steps below the step you are working on; this allows you to grip the carpet firmly and not lose your balance when ripping it off.

Step 2: Loosen and Grip the Carpet 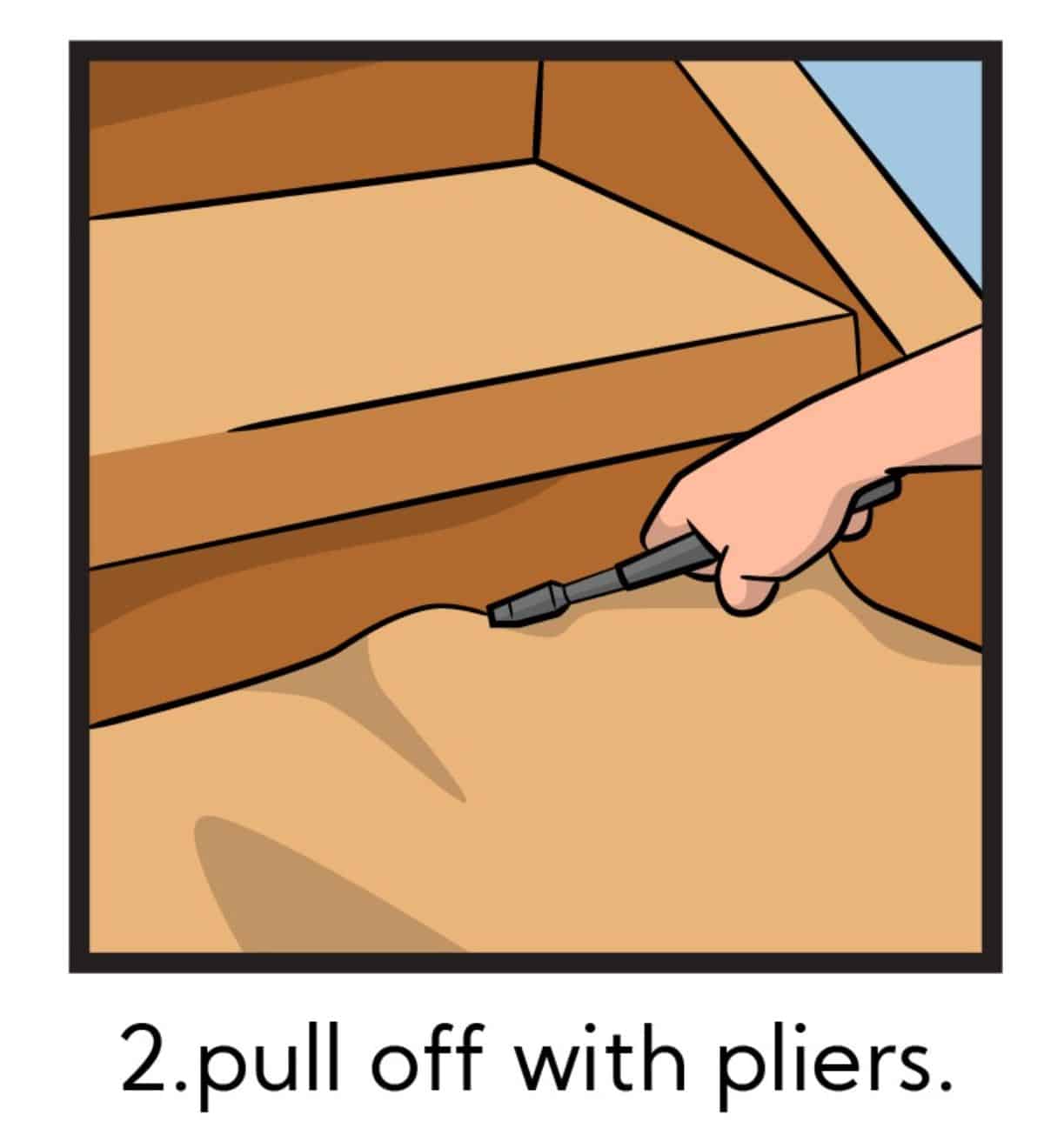 First, remove any tacks that keep the carpet in place. Pliers should do
the trick here, as these tacks are generally not long and come out quite easily. As an alternative to pliers, vice grips work well too.

When you have removed the tacks, pull back the carpet starting from the
seam using pliers to loosen strands of the carpet thread as you go along.

Top Tip: Have a wad of newspaper handy and place the tacks in the newspaper as you go along. When all the tacks are removed, create a small thick parcel with sharp points facing inwards. Secure the parcel with a generous amount of duct tape, which makes it easier to move the tacks and prevents jabs to your fingers. Alternatively, use a small disposable container with a lid.

Step 3: Pull the Carpet off the Stairs 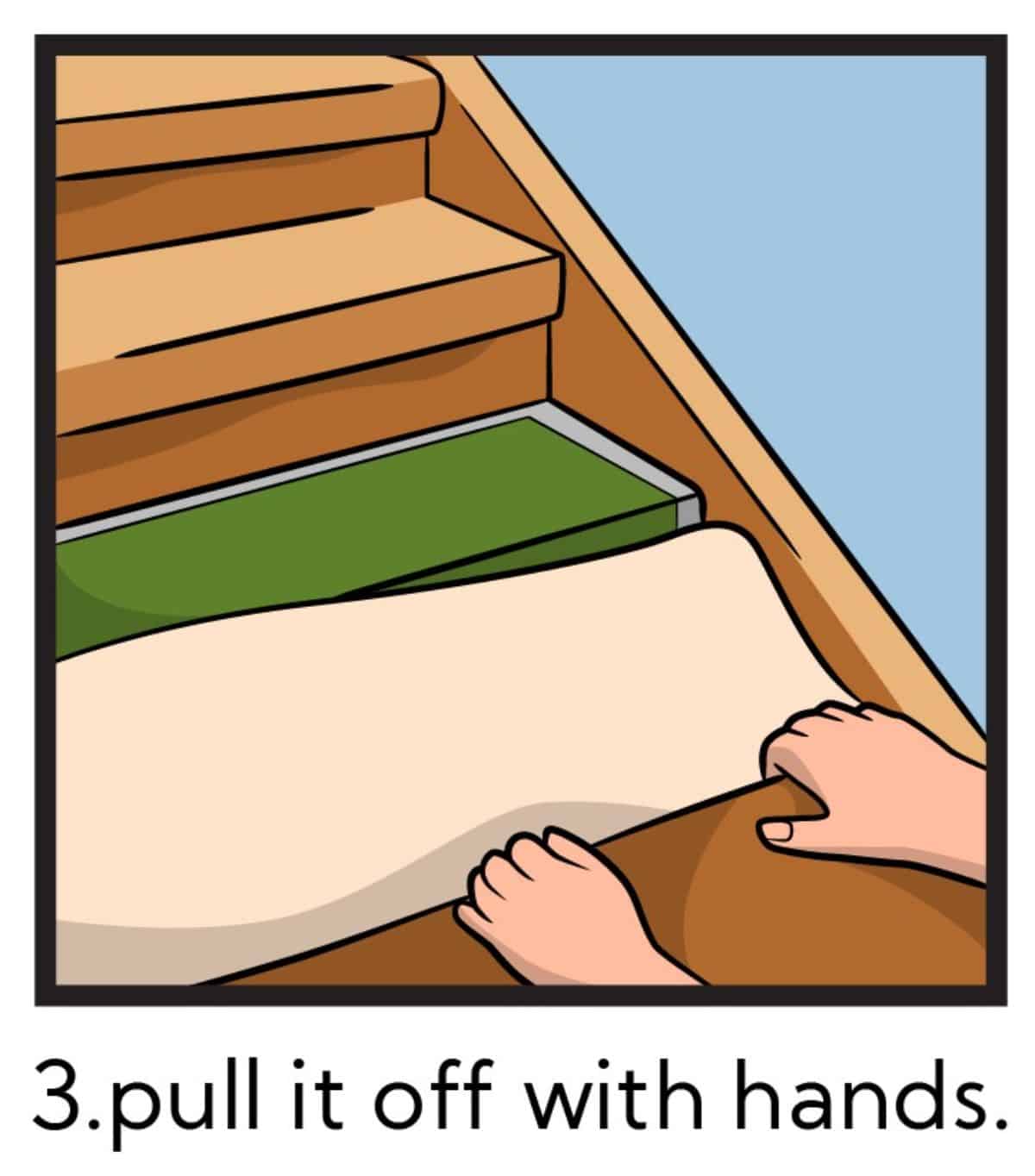 When the tacks have been removed, and the carpet is free from the seam,
grip the carpet with both hands and pull the carpet upwards towards yourself. The best way to remove the carpet is to pull it off in the same direction it was laid, generally top to bottom of the staircase, giving you a better grip to pull off larger sections of the carpet.

Top Tip: Roll up carpet sections and secure them with duct tape to make it easier to move your carpet from inside your home for waste disposal. 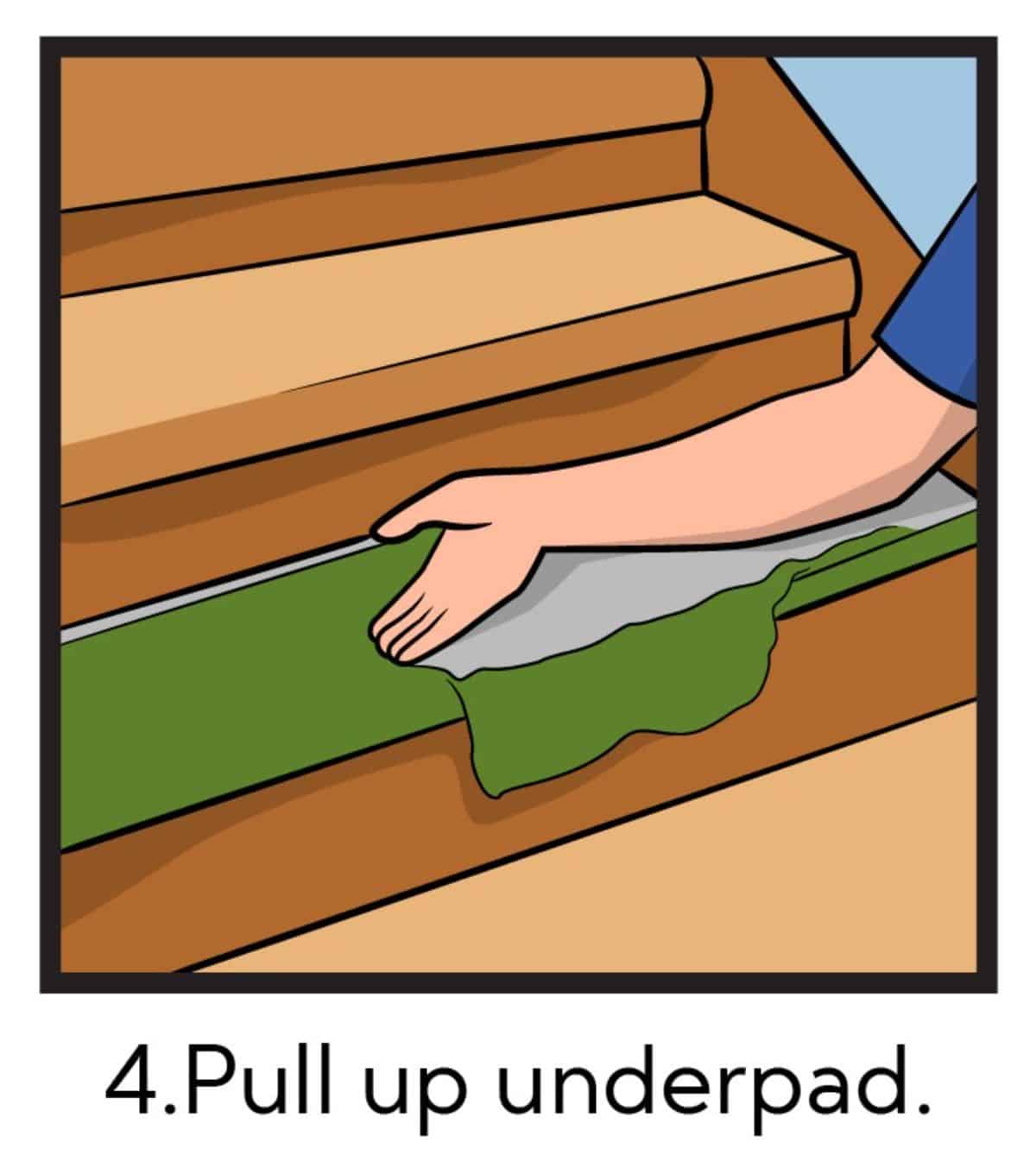 The underpad is more difficult to remove than the carpet, and you may
need to use pliers or a vice grip to tear it and break it off in chunks.

Your pad could be glued to the stairs and not stapled. Two types of glue
are used to secure under pads; white and brown.

To remove white glue, mix boiling water and dishwashing liquid. Pour the
liquid onto the sticky areas. Leave it for a while until the glue starts dissolving. Remove the glue with either a scraper or a scouring pad, and leave the surface to dry.

Brown glue is not water-based and is difficult to remove. Sand the glue off,
or try using cola to dissolve the adhesive. Take care not to damage the surface of the stairs when you remove the glue.

Neatly trim the edges of the underpad if you plan on using it again.

Step 5: Pull out all the Staples 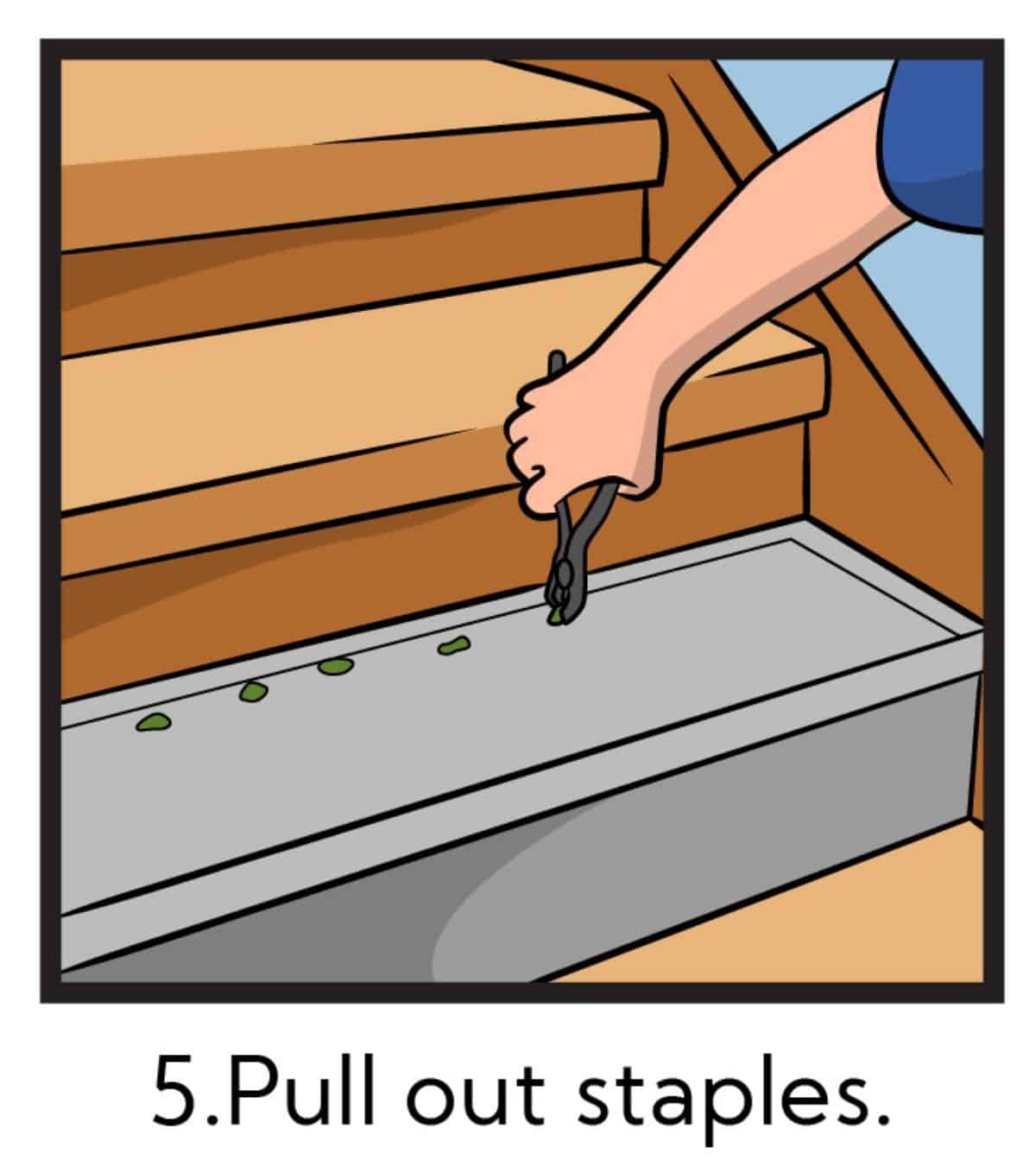 Removing staples from the underpad is the most challenging part of this
project. Using pliers pull out all the staples that attach the underpad to the
stairs. Staples may be more difficult to remove than tacks. Take care not to
break any wood while you are doing this.

The best plier to use is a diagonal plier, which allows you to grip the staple firmly, irrespective of its direction. Diagonal pliers are also gentler on the wood.

Suppose you cannot take the staple out without breaking a section off.
In that case, the diagonal pliers allow you to grip the remaining staple piece from any direction. Needlenose pliers are also ideal for tackling broken pieces of staples.

Another option is to use a screwdriver and wedge it under the tack; give
the handle of the screwdriver a few taps with a hammer, and the staple should lift out.

A heavy-duty office staple remover and a 4-inch scraper with a blade also work well. Look for a scraper that has a comfortable handle to make the scraper easier on your hands.

Your stairs must be completely smooth, whether recarpeting, tiling, or
restoring the wood beneath. If you cannot remove some pieces of the staples, hammer the remaining broken pieces back into the wood. 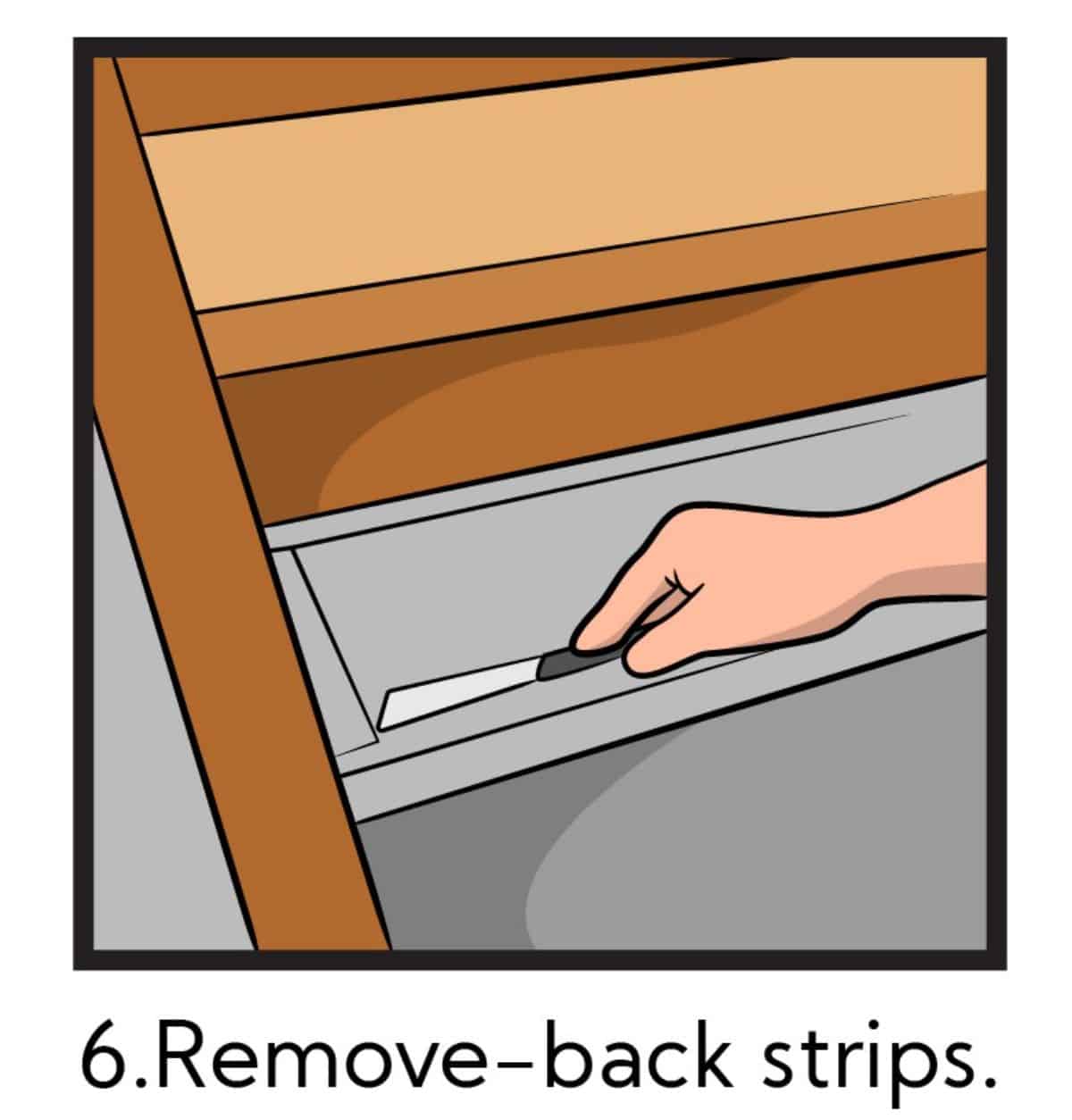 The tack strip holds the underpad in place and is attached to the join below the riser. Be aware that tack strips often break when you take them off. Tack strips that have been in place for a long time or used more than once will generally not be in good condition; you will be aware of this if you start the project by examining a small section before removing the carpeting.

When you have loosened that tack strip pull it out cautiously. Take care not to get splinters in your fingers, and pick up any splinters or pieces of broken wood as soon as possible. Tacks often fly off the tack strip when removed; you must wear eye protection.

Dispose of the back strips in a considerate way. Whoever removes your
garbage may injure themselves on splinters, broken wood, or remaining tacks.

Top Tip: When you have finished removing the staples, put your hand into a glove and gently run this over the surface to ensure the surface is staple-free and smooth.

If you plan on recarpeting your stairs, take care not to damage the tack
strips so they can be used again to attach new underpads and carpeting.

Step 7: Cut the Corners of the Stringer Carpet 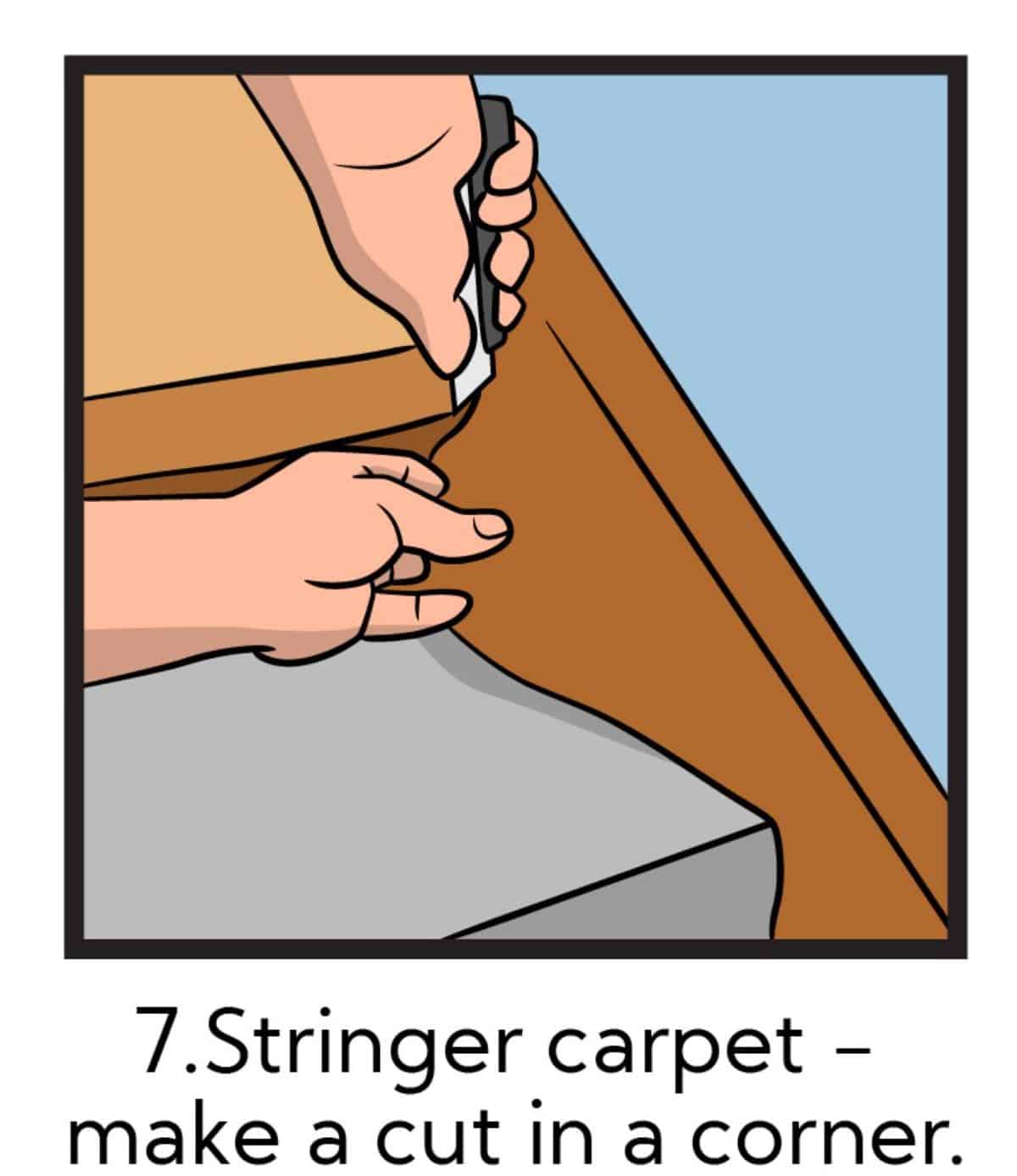 The next step in removing carpeting is to remove the stringer sections which run up the side of the staircase. Start by cutting corners along the
joins of the stingers, giving you a place to grip the carpet. The likelihood is
good that you have to make several cuts to loosen the carpet because it is attached at an angle and generally not in one long strip.

Top Tip: Stringer sections are often attached to a wooden board, often plywood, that runs down the side of the stairs; if you cut right through the carpet, chances are good that you will damage or scratch the board. Instead of cutting through the carpet, use vice-grip pliers to pull sections off. Vice grip pliers make gripping and pulling the stringer carpet easier. 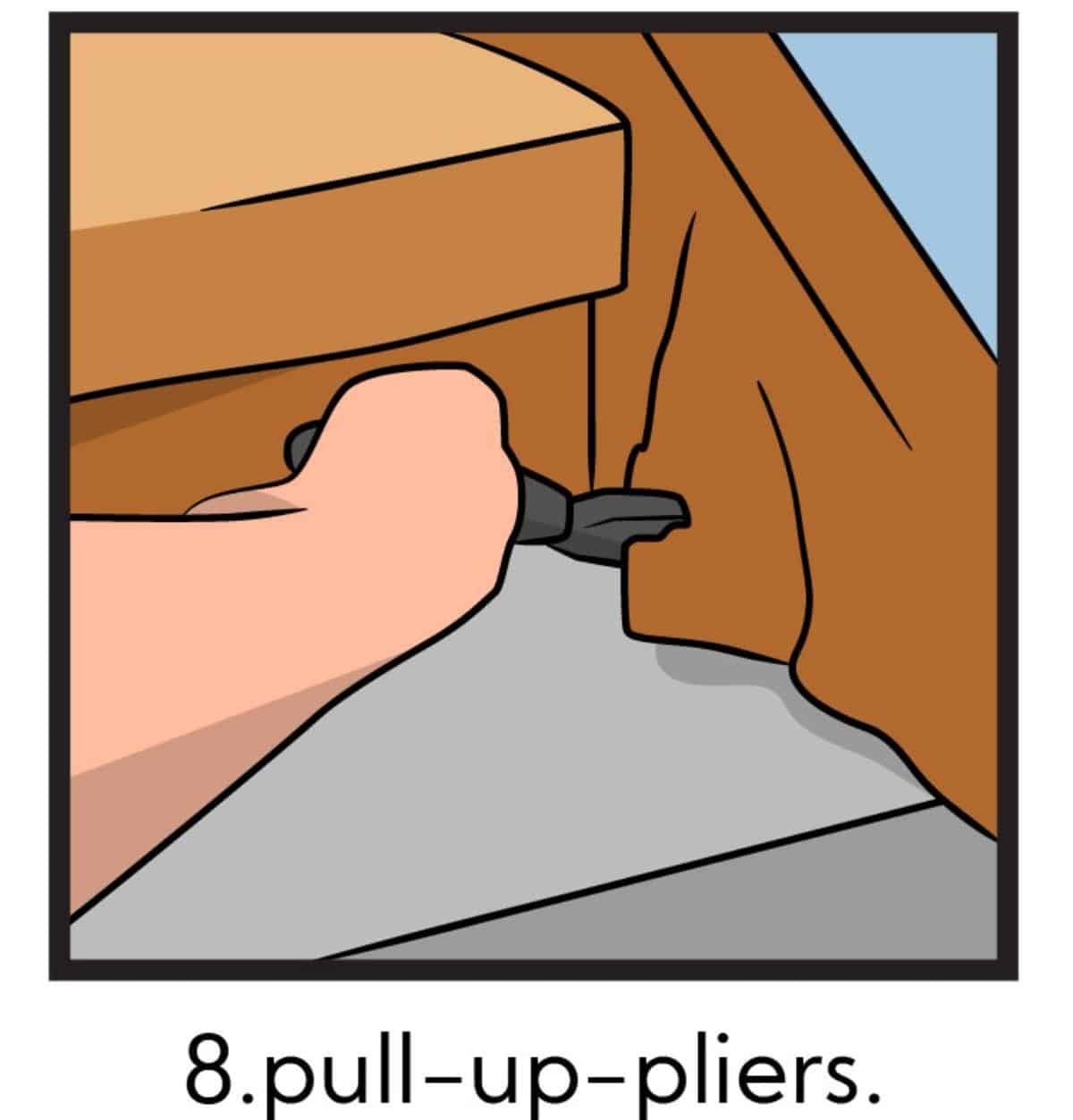 Remove the stringer carpet as you tackle each stair; you can clean each
step thoroughly before moving on to the next, saving you the trouble of picking up tacks and staples twice. 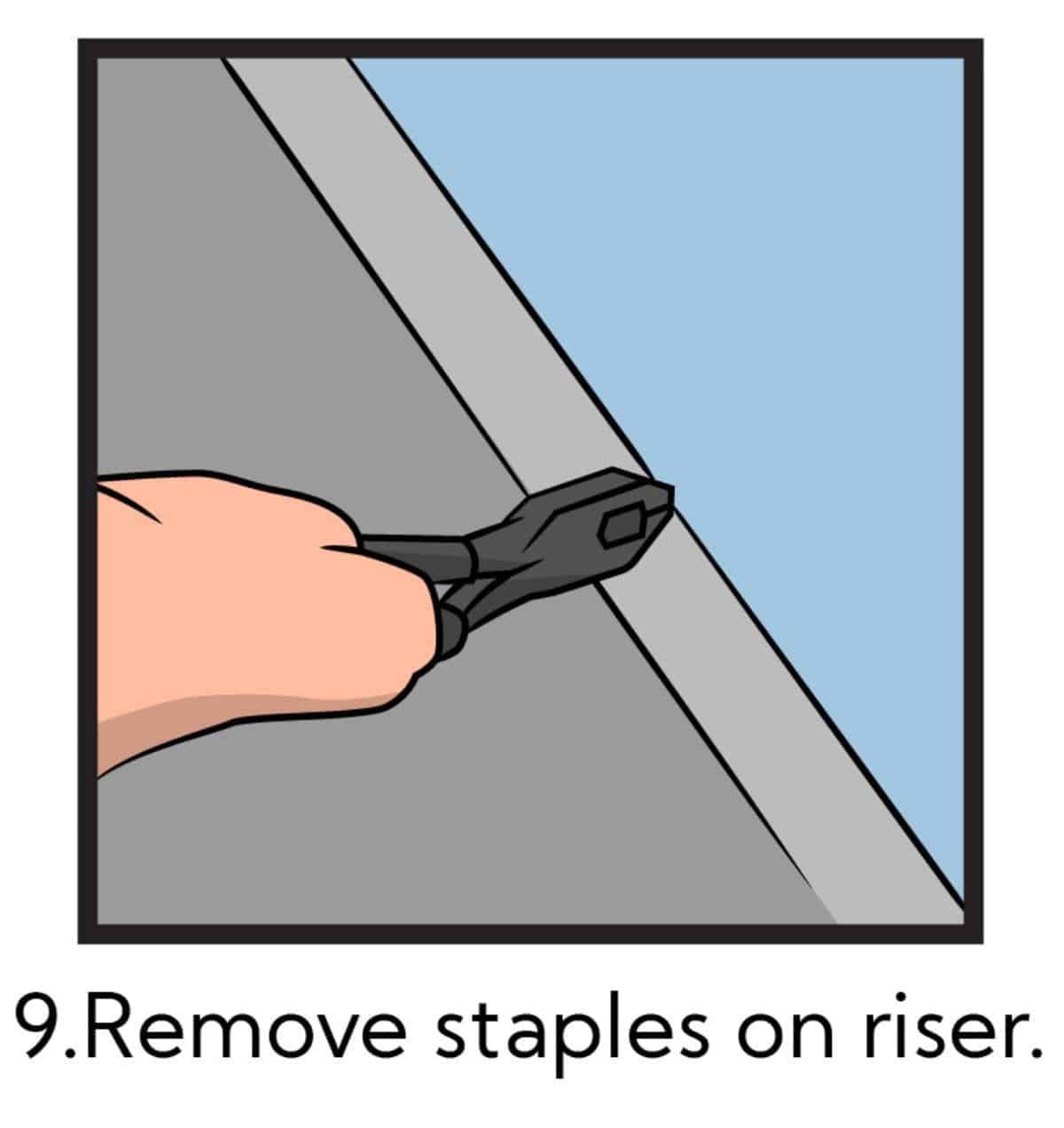 You could be surprised by the number of staples along the stringer board. They may also not be lined up as evenly as those on the underpad. Use the same method to remove stringer staples as with underpaid.

There is usually wood that runs along the side of the stairs. If the wood under the carpet is in good condition, leave it in place depending on whether you plan to carpet your stairs again or not.

After clearing each stair of stringer strips, fill holes with wood filler and smooth everything down. Use a scraper or sandpaper to create a smooth surface.

Take note that removing the actual stringer board is not necessarily a DIY project, as you may need to cut wood sections with powerful tools. If you
are not an accomplished DIYer, don't attempt this on your own; rather, leave it to a professional.

Although pulling carpet off stairs is a relatively uncomplicated process,
there are many ways in which you could hurt yourself. Put safety first.

How To Remove Carpet From Stairs

5 Things to Know When Removing Carpet from Stairs

How to Remove Carpet From Stairs

How to Remove Paint from Wood

How to Remove Carpet From Stairs