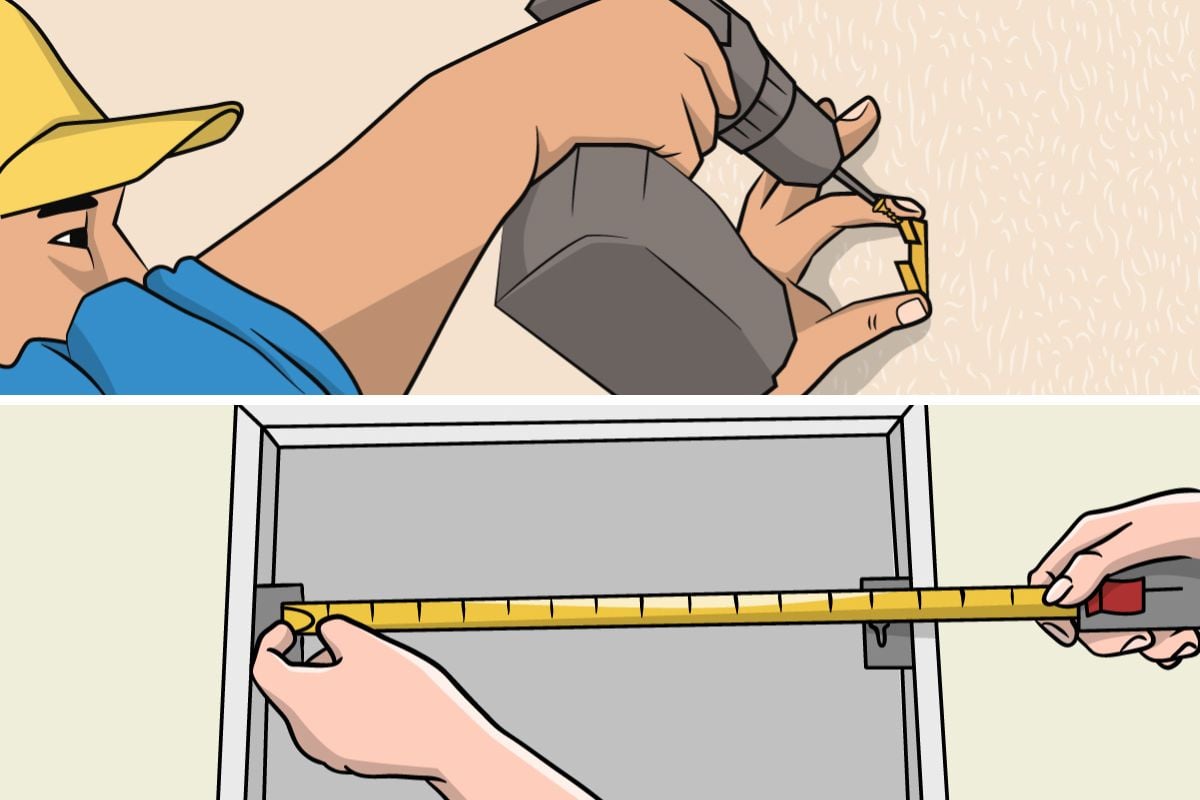 Hanging pictures and other heavy objects on a plaster wall can lead to nails and bolts being pulled out of the wall or whole chunks of the plaster being pulled off the wall. These are difficult and costly to repair.

Heavy objects can be hung on a plaster wall with the right tools and methods. To hang pictures and heavy stuff on plaster walls, use drywall screws instead of nails. For heavy objects, use molly bolts to grip the wall from the inside to create ‘feet’ with a wider surface area.

Step 1: Replace the Picture Hook Nail With a Drywall Screw 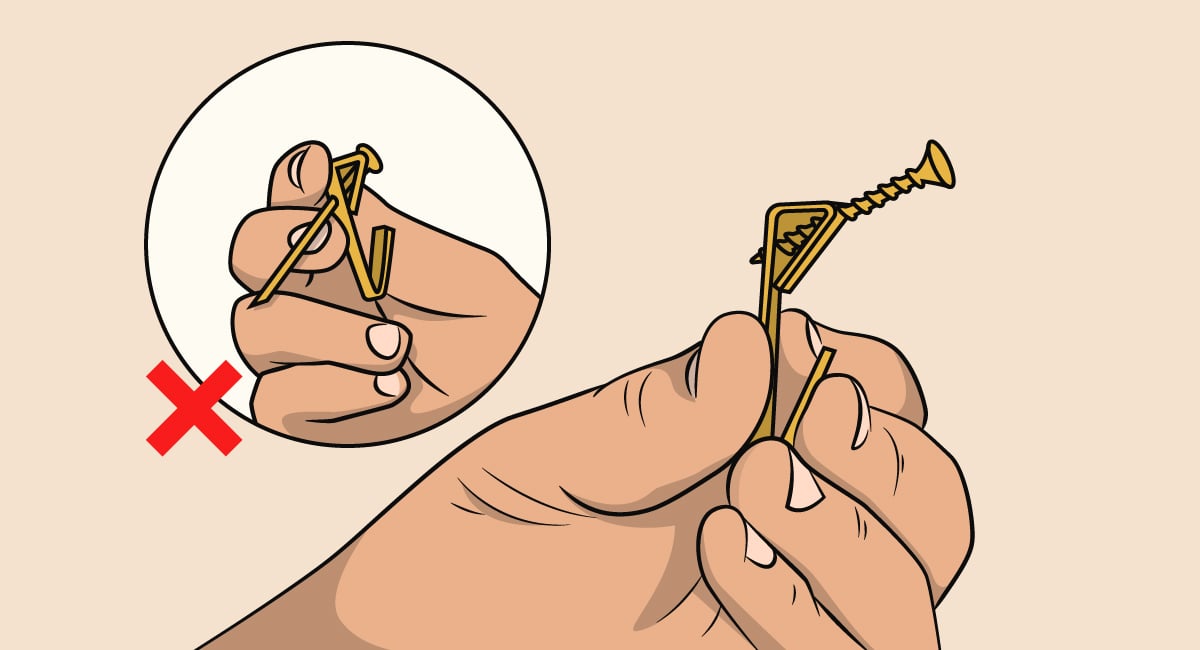 Picture hooks usually come equipped with a nail to be hammered into a wall. Even though many picture hooks place the nail at an angle so that it distributes the weight in the plaster better, this is often not enough to keep it secure over the long run.

A plaster wall will not create enough resistance against the nail to hold the picture's weight once it is attached. The picture may pull the nail out completely or become loose over time.

To gain more grip in the plaster so that the picture hook doesn't pull out, replace the nail in the picture hook with a drywall screw. The screw thread is designed to gain maximum grip once they are screwed into the plaster. They will also grip the lath board behind the plaster to help keep the hook and picture in place.

Step 2: Drill the Picture Hook Into the Plaster Wall 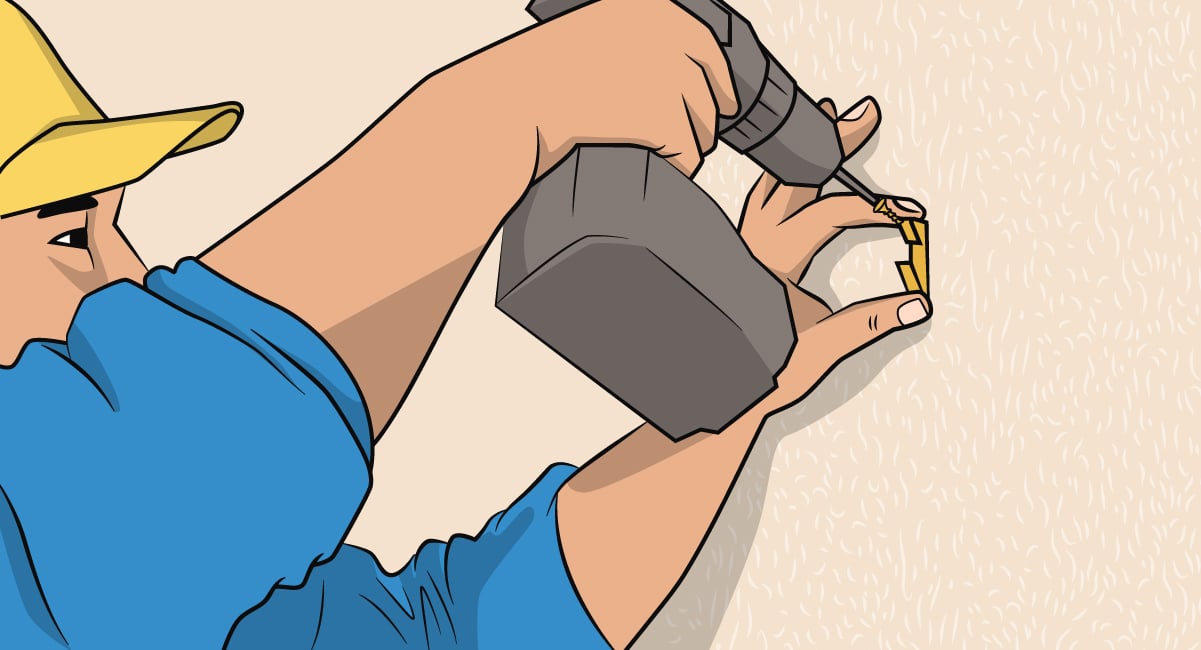 Top Tip: Use a drill with variable speed so that you can screw the drywall screw in slowly, gently, and without putting too much pressure on the screw. If it is screwed in too fast, the screw's thread may strip the plaster out of the hole or damage the wall.

Hang the picture on the hook and use a spirit level to set it straight. 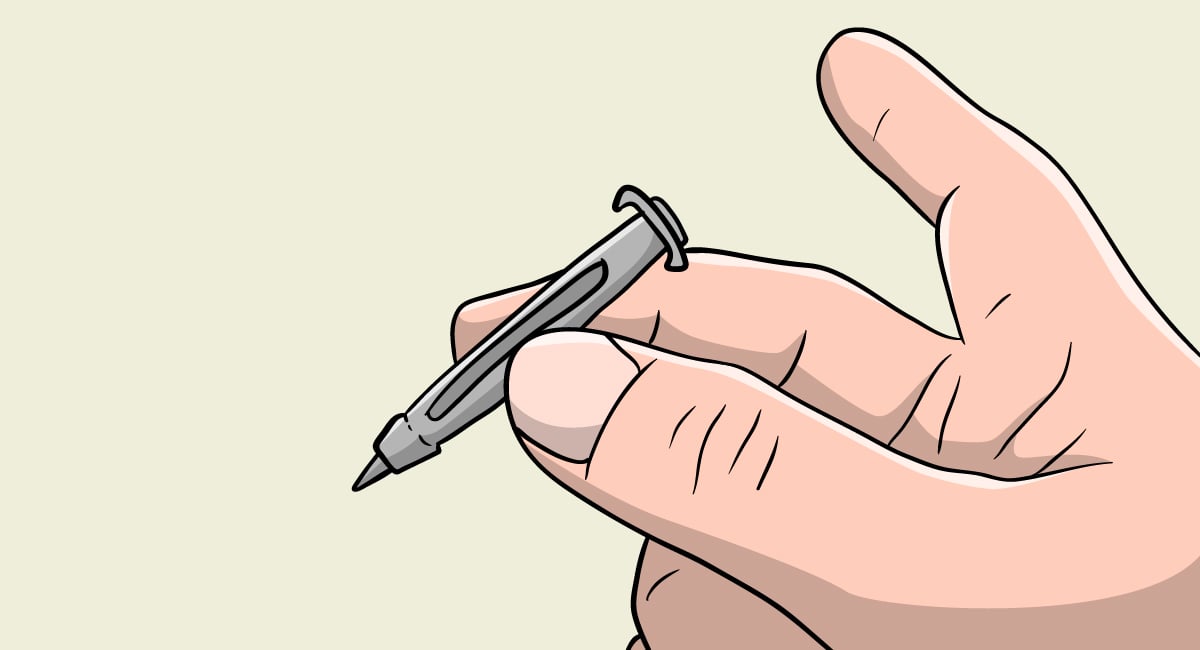 Plaster walls do not hold weight well, often crumbling the wall or pulling parts of the wall out when a heavy object is hung on it. Purchase molly bolts to use when hanging heavy objects to prevent this from happening.

The unique design of molly bolts allows them to grip the visible face of the wall and create a grip with a larger surface area at the back of the wall which allows a heavier object to be hung on it. See Steps 6-8 for how a molly bolt works.

Step 2: Stick Painters Tape Where the Holes Will Be Drilled 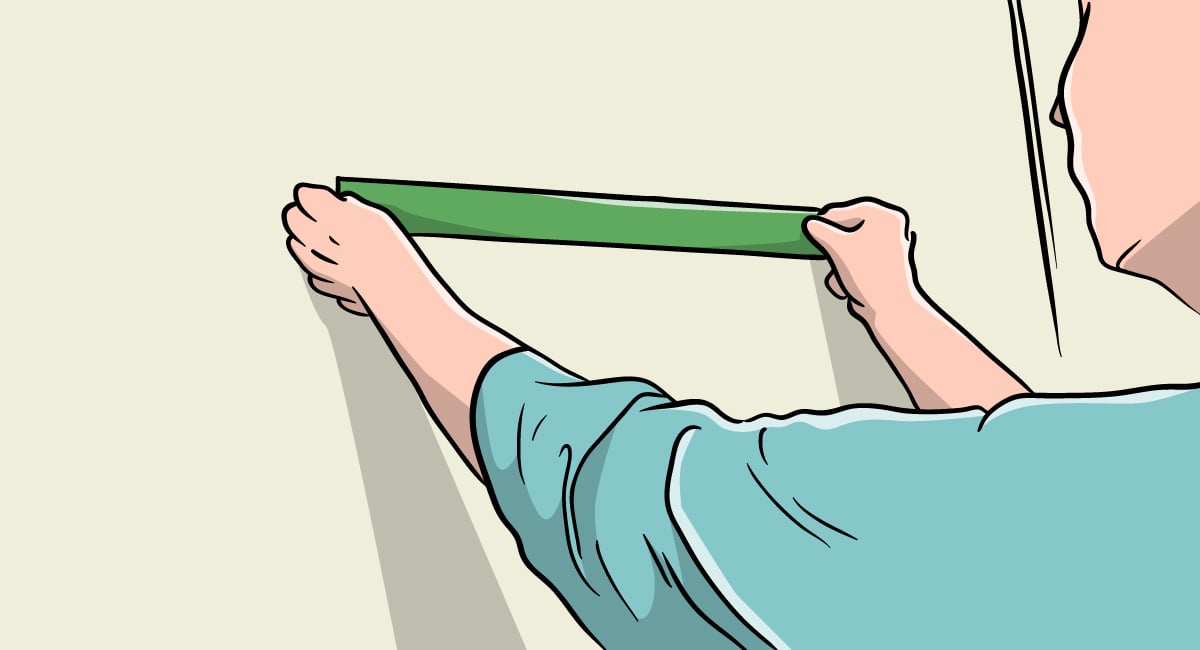 Decide at what height the drill holes will be then stick a piece of painter's tape wide enough to cover where the holes will be drilled.

Step 2 is not strictly necessary, but the painter's tape will help the project in two ways. First, it will allow you to mark the tape where the holes will go without making marks on the wall surface. The tape can be peeled off later, removing the pencil marks with it.

The second way painter's tape can assist in the job is to help hold the plaster in place when it is drilled. The tape stops the plaster immediately around the drill hole from coming loose and falling off while the hole is being drilled. It is often less messy as some excess plaster pulled from the hole will stick to the adhesive side of the tape rather than fall off as dust.

Step 3: Draw a Horizontal Line on the Tape Using a Level 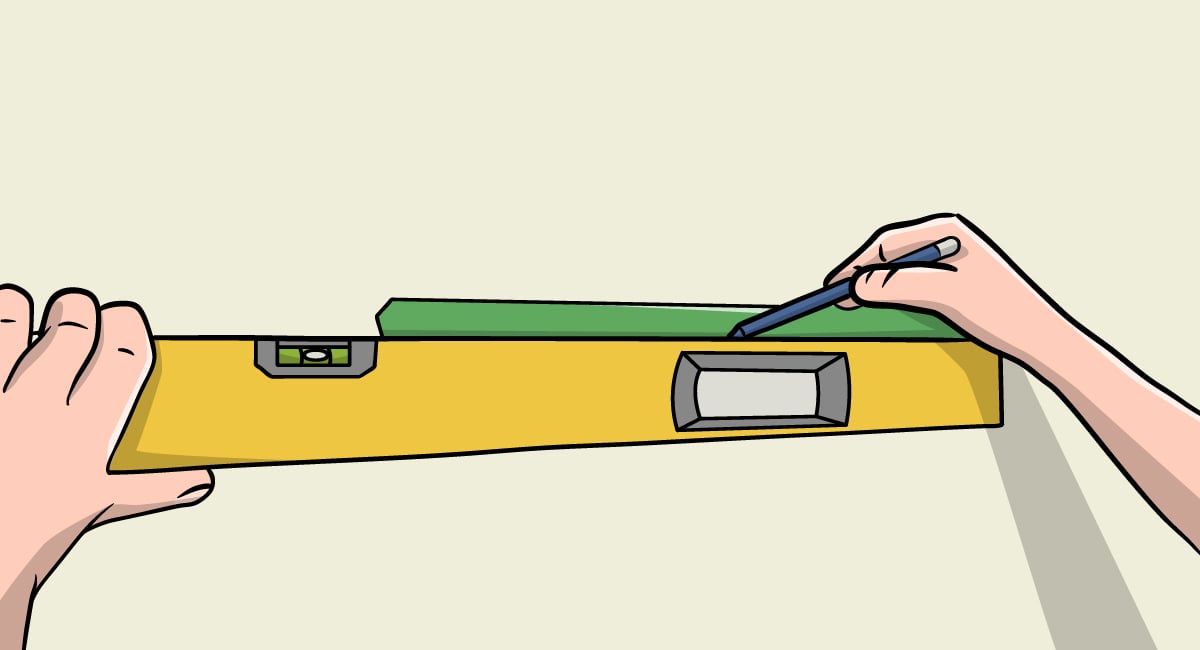 Place a spirit level on the tape and line it up so you can draw a perfectly level line on the painter's tape. Once level, draw the pencil line.

Top Tip: If you are working with the tape and level at eye level or from underneath, use a step or ladder to get your eyes and pencil above the line spirit level. Being above the spirit level will mean you can see that the pencil tip is drawing the line exactly in the corner created by the level and the wall. Standing underneath may mean you accidentally move the pencil tip up, drawing a skew line.

Step 4: Measure the Distance Between the Bolt Holes 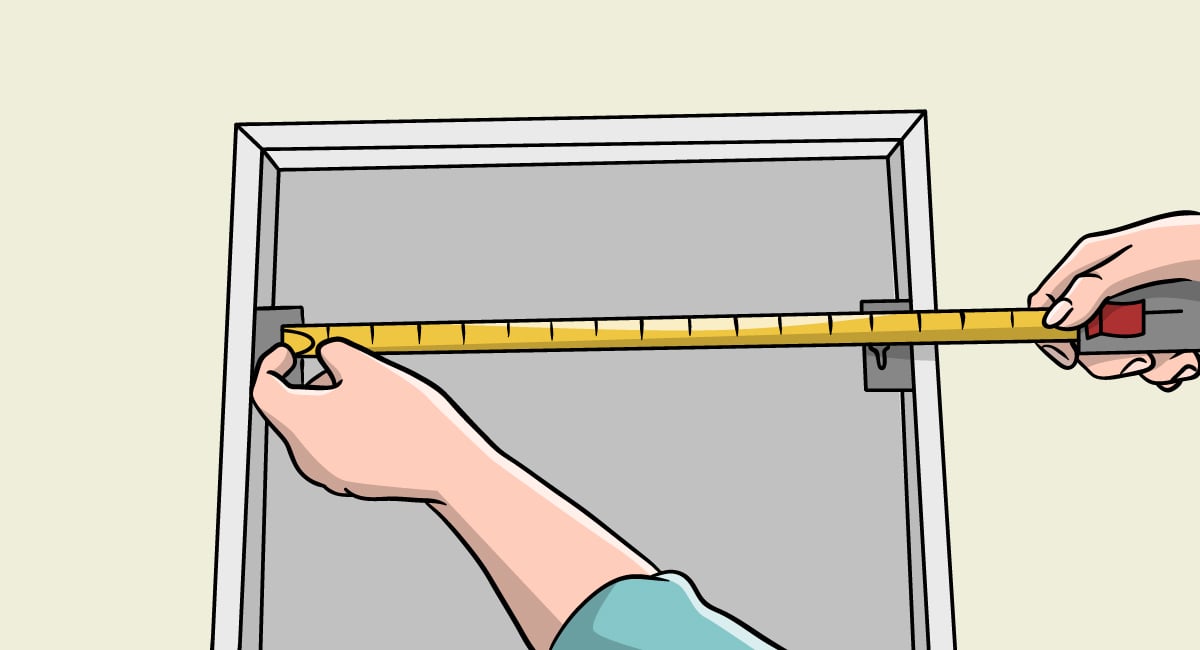 Using a steel tape measure, measure the distance between the bolt holes on the picture or object to be hung.

Top Tip: Because plaster walls are not as strong as other wall types, use more bolts than fewer, as they will distribute more weight. Do not put one bolt in the wall and run a string between the holes on the picture, as this will transfer all the picture's weight onto just one bolt.

Step 5: Transfer the Bolt Measurement to the Wall 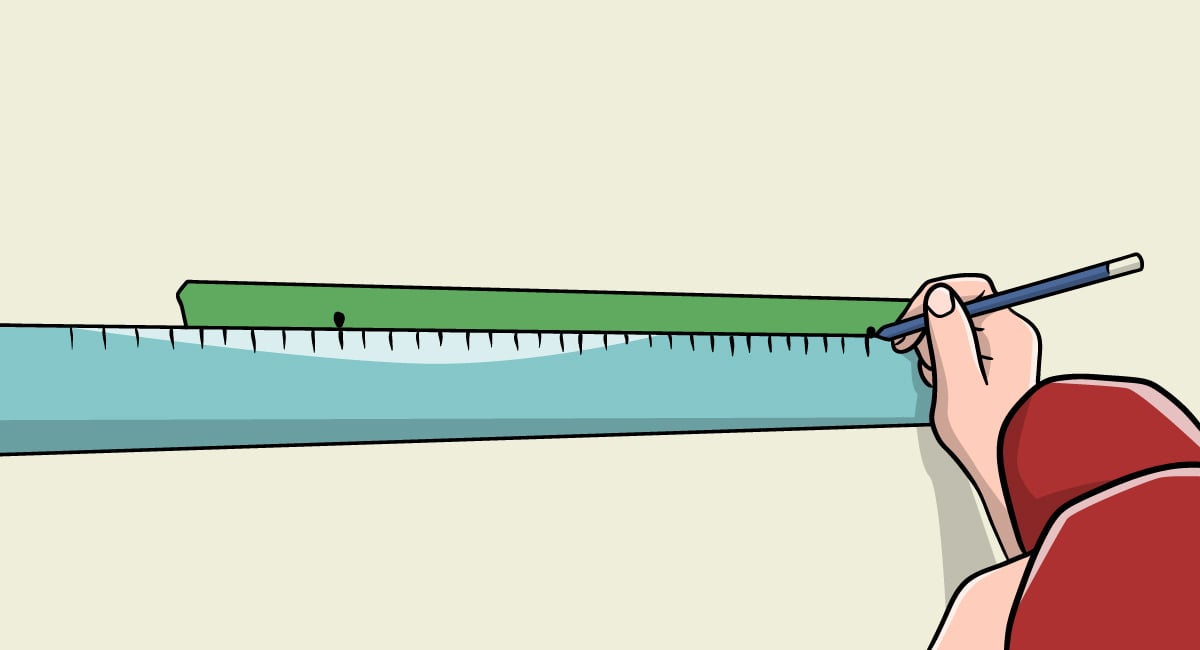 Transfer the distance measurement between the two bolt holes onto the line on the tape on the wall. Use a hard ruler for this measurement rather than a tape measure, as the hard ruler will not bend or move, making it more accurate.

Mark the places where the molly bolts will go with a pencil.

Step 6: Drill Holes Into the Wall at the Markings 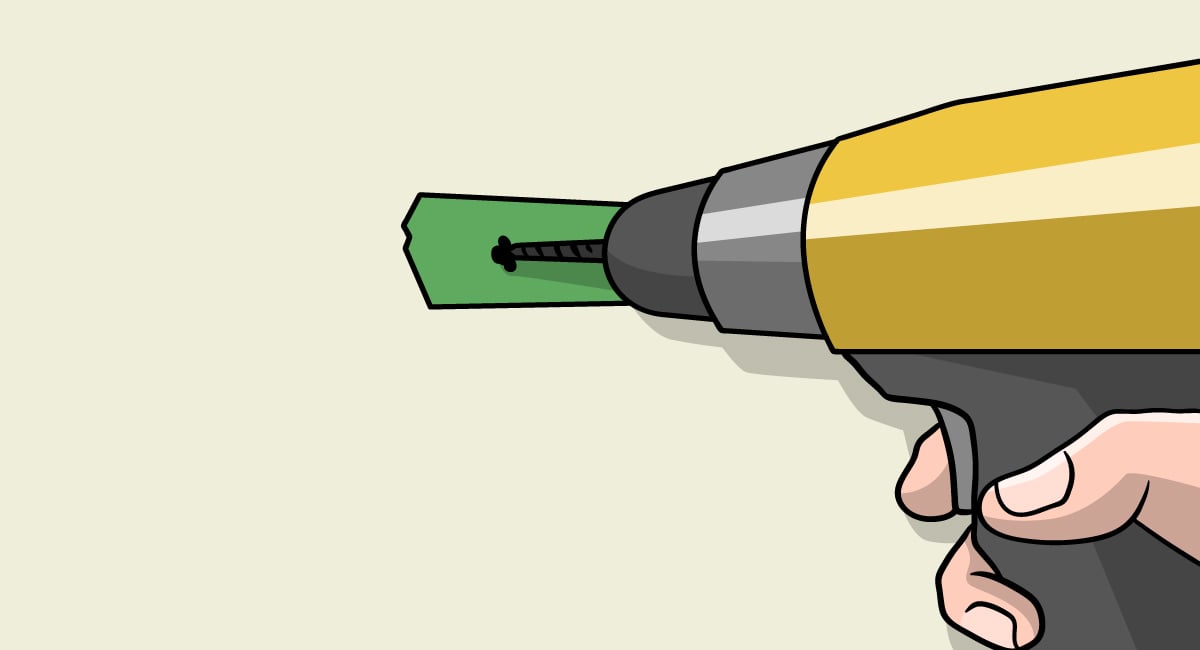 Attach the drill bit to the drill and drill the holes at the markings on the painter's tape.

Step 7: Lightly Tap the Molly Bolts Into the Holes 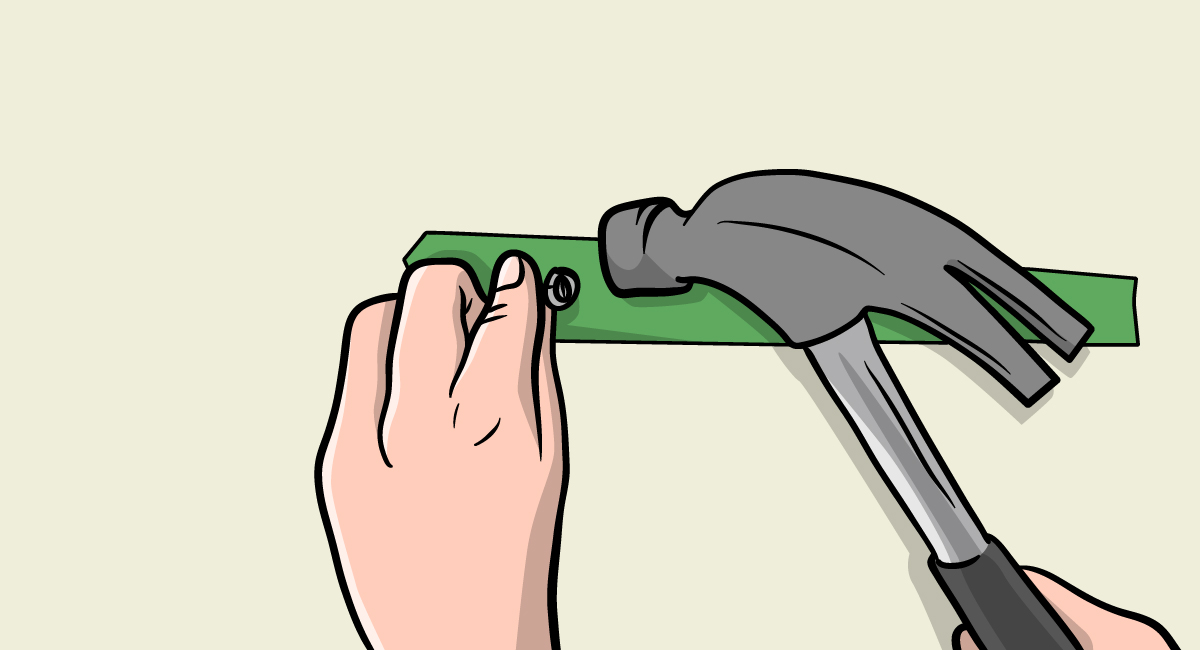 Be gentle with this step because the molly bolts are being inserted into a hole, so they will not need to be hit hard. Rather, gently tap them in until the bolt is almost fully in the wall, but before the teeth on the head of the bolt have not yet sunk into the wall.

Remove the tape from around the hole and then continue to tap the bolt in until the teeth on the head of the molly bolt grip the face of the wall.

Step 8: Screw the Molly Bolt in to Secure It to the Wall 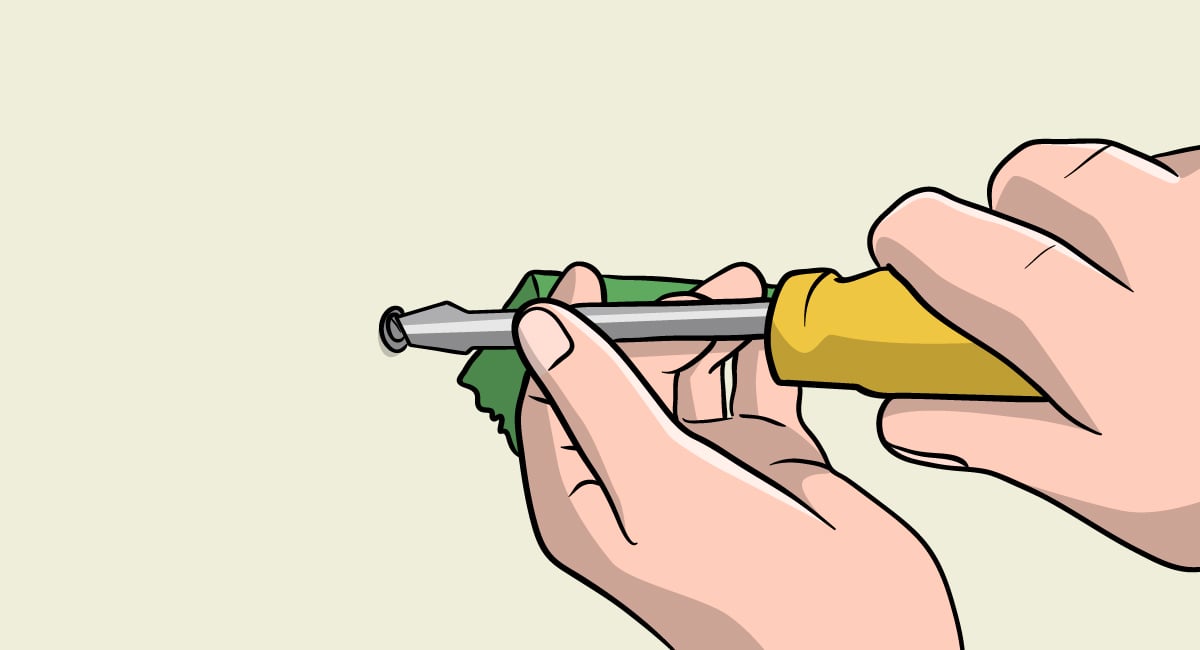 Turn the screw in the molly bolt clockwise using a screwdriver until you feel moderate to strong resistance.

A molly bolt is designed so that when the bolt is in a wall, and the head of the bolt is secure on the face of the wall, it will pull up and butterfly the sheath into two or three 'feet' on the inside of the wall creating a large surface area for the bolt to sandwich the wall between the bolt feet and head.

When the resistance on the bolt is strong as you turn it, this indicates that the 'feet' have gripped the inside of the wall. Fully gripping the wall from the inside will require several turns and may require effort and time.

Step 9: Drill and Insert the Bolt in the Second Hole 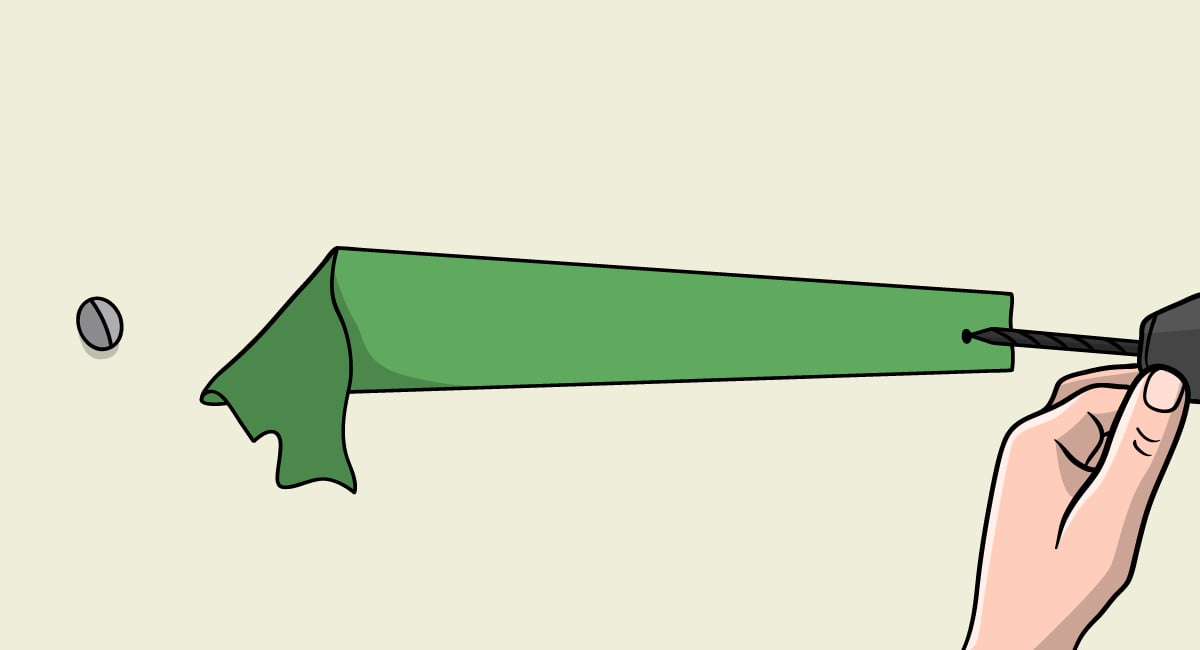 Follow steps 6-8 to insert the molly bolt in the second hole. Remove the painter's tape so that all the markings and lines are no longer on the wall.

Step 10: Check Each Molly Bolt and Back Out Screws Slightly 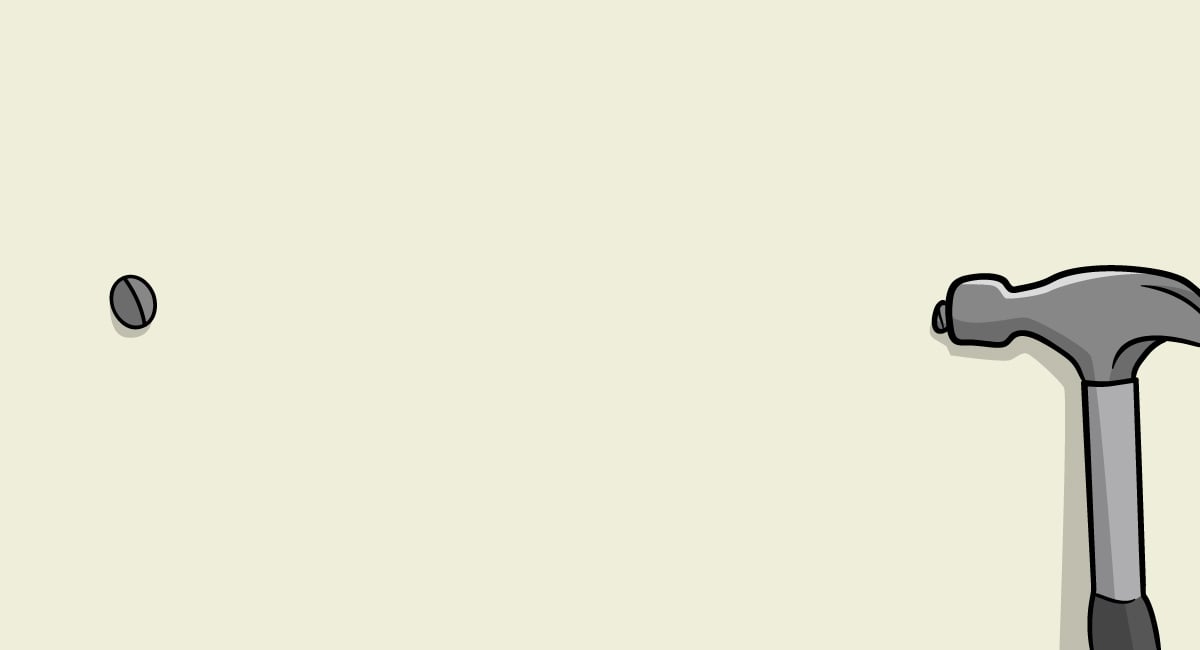 Using a hammer, lightly tap each bolt to ensure it is firmly in the wall and has not moved.

Then turn each screw out slightly using a screwdriver. Turning the screws out a few turns will give enough space to hang the mounts on the screws. You will only need to back out each screw enough to make room for the mounts. Backing out the screws too far may loosen the bolt inside the wall. 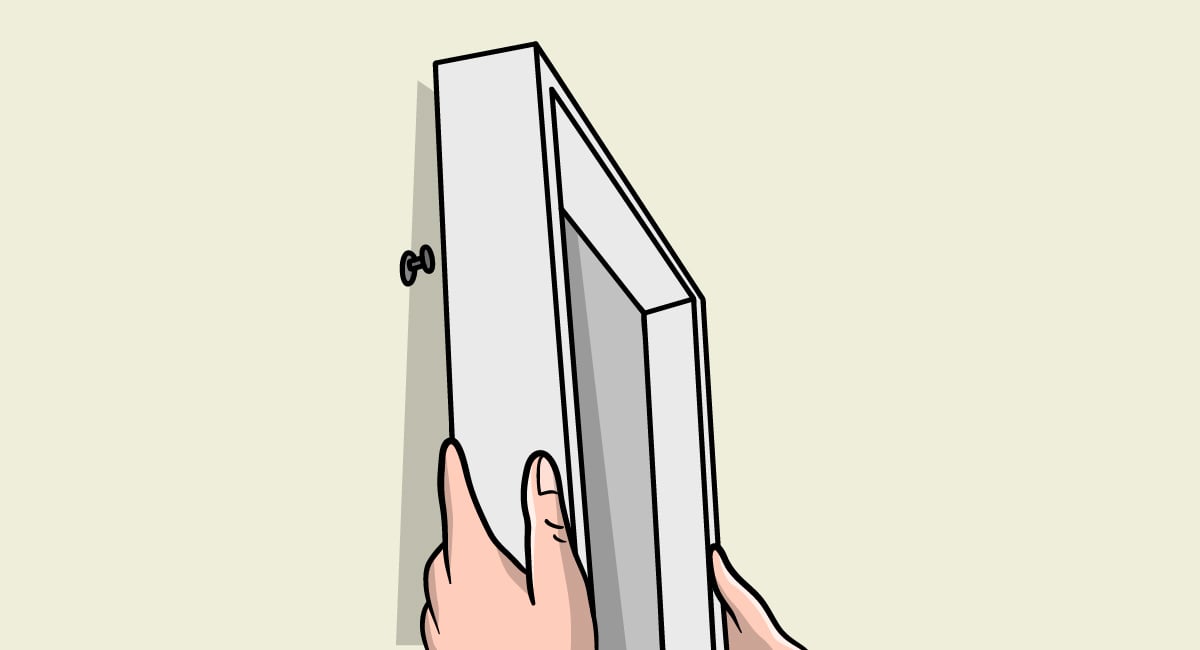 Line up the keyhole bolts and lower the picture onto the molly bolt heads. Your picture will hang on bolts strong enough to hold heavy objects on a plaster wall.