Kiwi is a nutrient dense fruit that's a great addition to your diet. It is essential to clean kiwi before eating to remove dirt, bacteria, and pesticide residue. You can clean kiwi with a fruit scrub brush, water, and vinegr or baking soda. Wash the fruit right before eating. 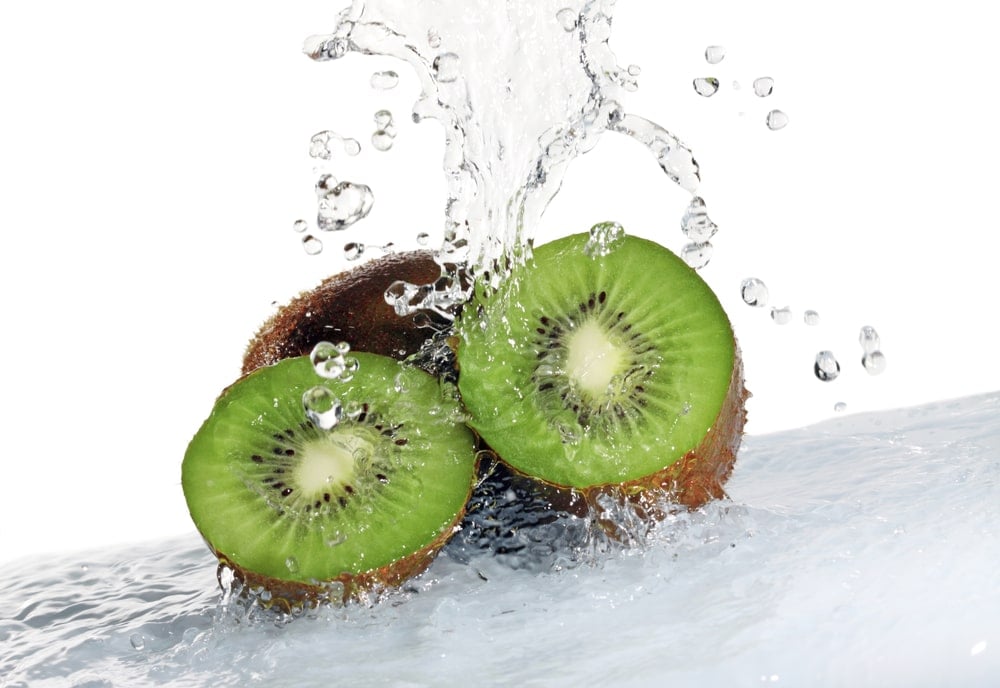 Kiwi is a fun fruit. The fuzzy brown skin and bright green interior bring out the kid in everyone. Many people simply peel kiwi fruit and toss the skin. However, you may be pleasantly surprised by the benefits of eating the skin.

Before you chomp down on this lovable fruit, you’ll need to know how to clean kiwi. But first, we’ll look at what kiwi is, and why you should consider eating the whole fruit.

Related: How to Store Kiwi Fruit | Types of Kiwi Fruit 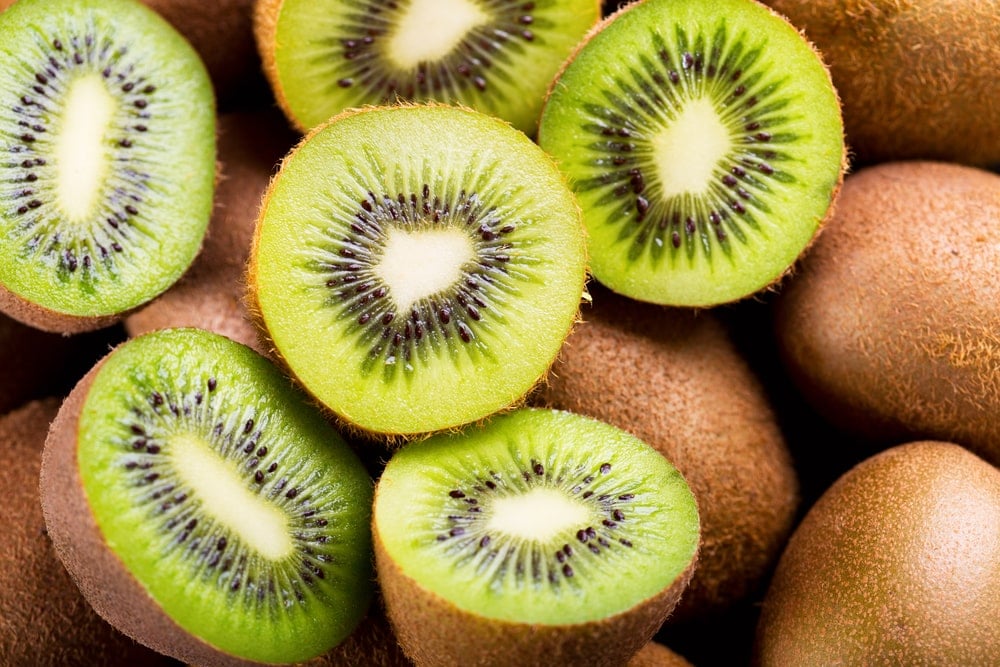 Kiwi originated in China, where it is known as gooseberry. It was originally eaten for medicinal purposes. It wasn’t until the 20th century that the fruit began to gain international popularity.

In the 1940s, New Zealand began growing kiwifruit as a cash crop. It was introduced to the U.S. in 1960, where it quickly became popular on its own and as an ingredient in a fruit salad.

You may be surprised to learn the fuzzy type normally seen in the grocery store isn’t the only type of kiwi. There are actually 50 types, but there are three main varieties of kiwi vine.

The types of kiwi are: 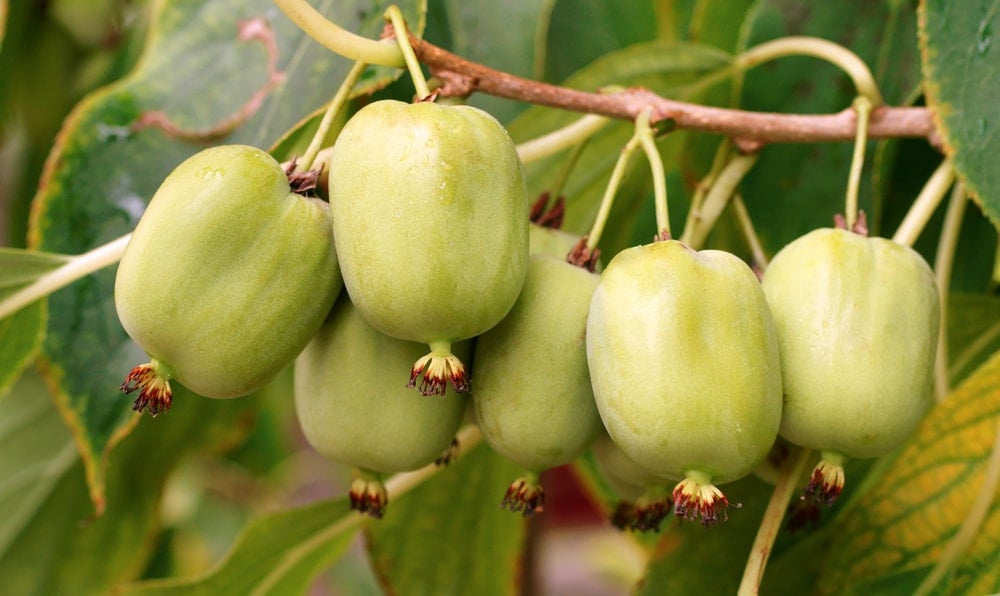 Hardy kiwi has smooth skin, which is very pleasant to eat. It’s smaller than the fuzzy kiwi, but it grows well in cooler climates. It’s sweeter than fuzzy kiwi as well, with a taste resembling a grape.

Super hardy kiwi is the smallest. It has smooth skin as well. It can thrive in very cold temperatures. 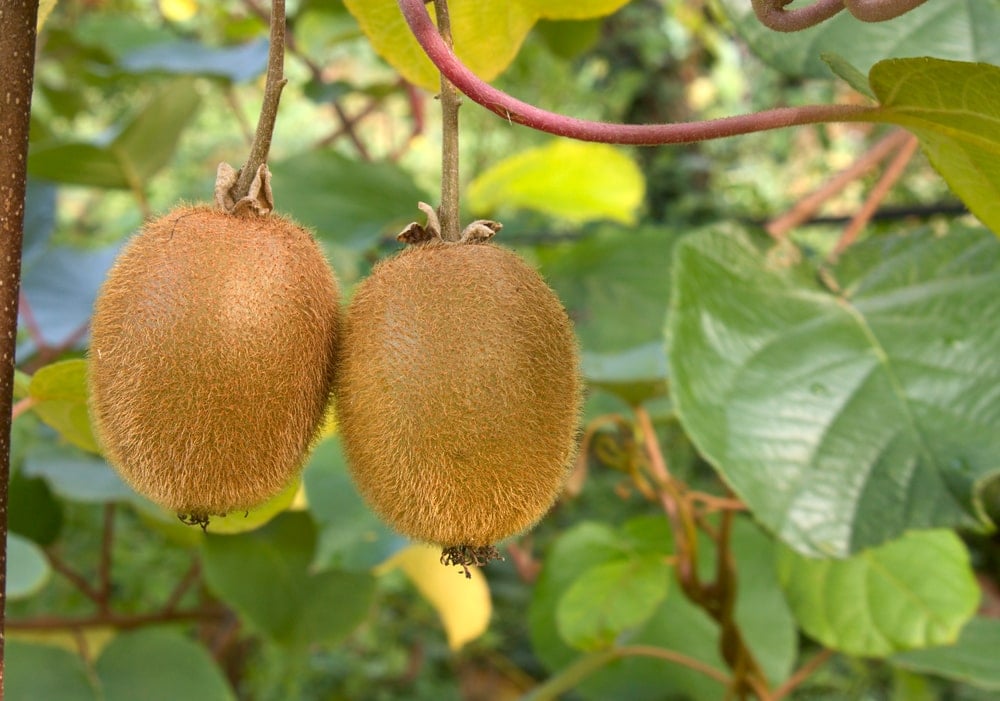 Fuzzy kiwi is also known as grocery store kiwi because it’s the type you commonly see in grocery stores. True to its name, it has the fuzzy skin most people associate with kiwi.

These kiwis require a warm climate, like that found in Southern Asia. It is the largest type of kiwi.

When and Why to Clean Kiwi 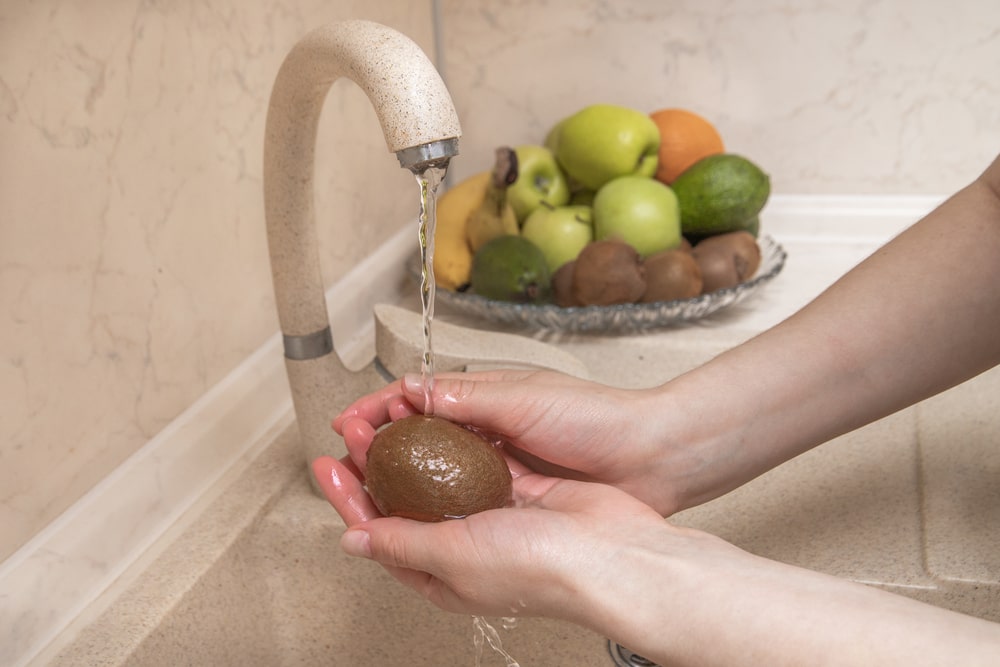 Kiwi is delectable, but the skin can pick up plenty of things that aren’t. You’ll need to remove dirt, and bacteria that could be growing on the fruit.

It can also have pesticides, so you should consider purchasing organic fruit if you want to eat the peel. If organic isn’t an option, a good cleaning should remove most of the pesticide residue.

Bacteria is actually the biggest reason you should wash your fruits and vegetables. You may think of salmonella and e.coli as concerns with meat, but fruits and vegetables can be contaminated with them as well. Because we don’t normally hear about smaller outbreaks, food-borne illness from unwashed fruit is more common than most people know.

When you wash your kiwi is just as important as how to clean kiwi. You should wash it right before eating or preparing the fruit.

Never wash kiwi and then store it in the fridge. The moisture can provide an ideal environment for bacteria. If you do need to wash your fruit before storing it because of visible dirt, be sure to dry it well before storing it.

How to Clean Kiwi Fruit 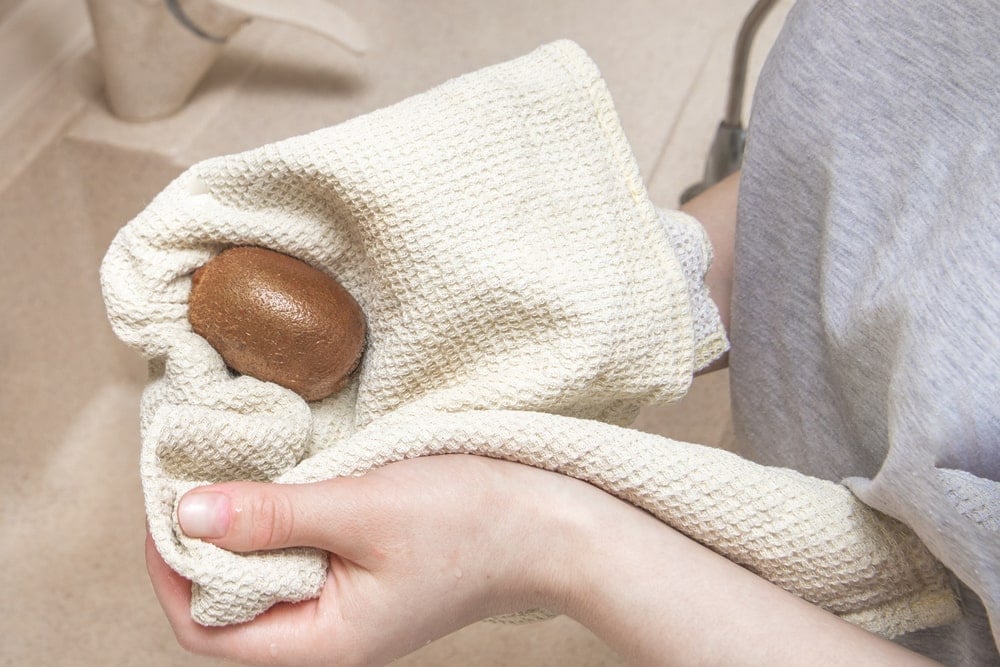 To clean kiwi fruit, you’ll need a firm scrub brush. Run the kiwi under cold water, and use the scrub brush to remove debris from the kiwi skin. Rinse thoroughly after scrubbing, then pat the kiwi dry with a towel or paper towel.

Should You Use Bleach?

Fruit can harbor bacteria, so you may be tempted to soak it in bleach water before eating. However, this can change the flavor of the fruit. It can also be harmful to your health.

However, baking soda is an excellent option when washing produce. Soak fruit in water with baking soda, or use baking soda when you are scrubbing the kiwi. This will help remove dirt and bacteria.

You can also use vinegar to soak fruit to clean it. Use 3 parts water to 1 part vinegar. Vinegar is an excellent disinfectant, and it doesn’t carry the health risks of bleach. 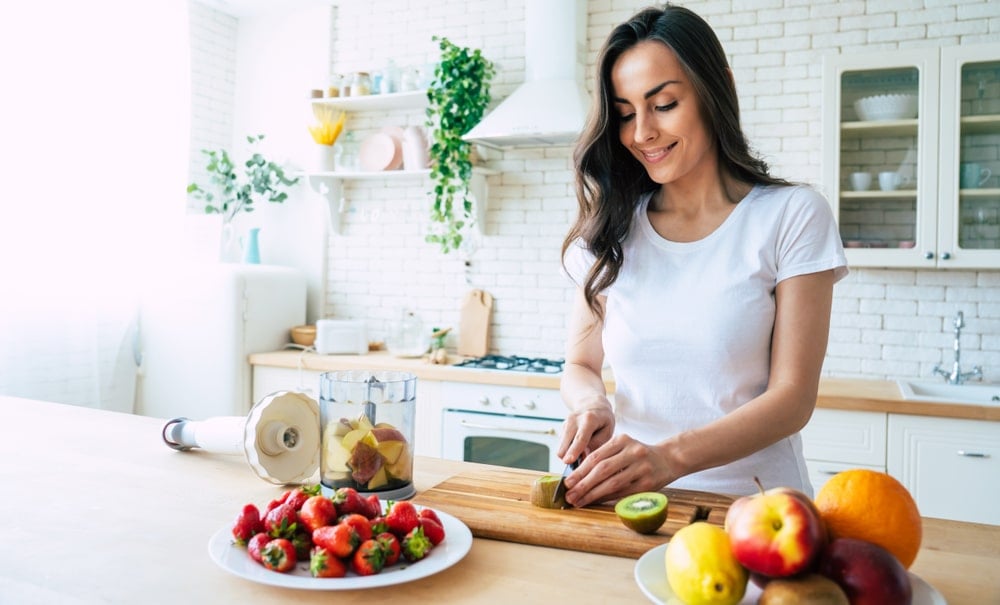 Once you have cleaned the kiwi, you have a few options. You can slice it with the peel on. This will help it hold its shape, and provides a textural contrast to the soft smooth flesh.

You’ll need to remove the stems on each end, and then slice the fruit, using a cutting board. It’s usually sliced into thin slices.

You can then eat it on its own, or create a fruit salad by adding it to other fresh fruit. You can store cut kiwi fruit in an airtight container.

You can eat the skin of the kiwifruit, but many people prefer to peel the kiwi. There are two methods for peeling a kiwi fruit skin quickly.

You can use a vegetable peeler. Remove the ends, and then remove the skin from the sides.

If you don’t have a vegetable peeler, you can use a spoon. Simply remove the ends, then use the spoon to remove the skin from the kiwi. 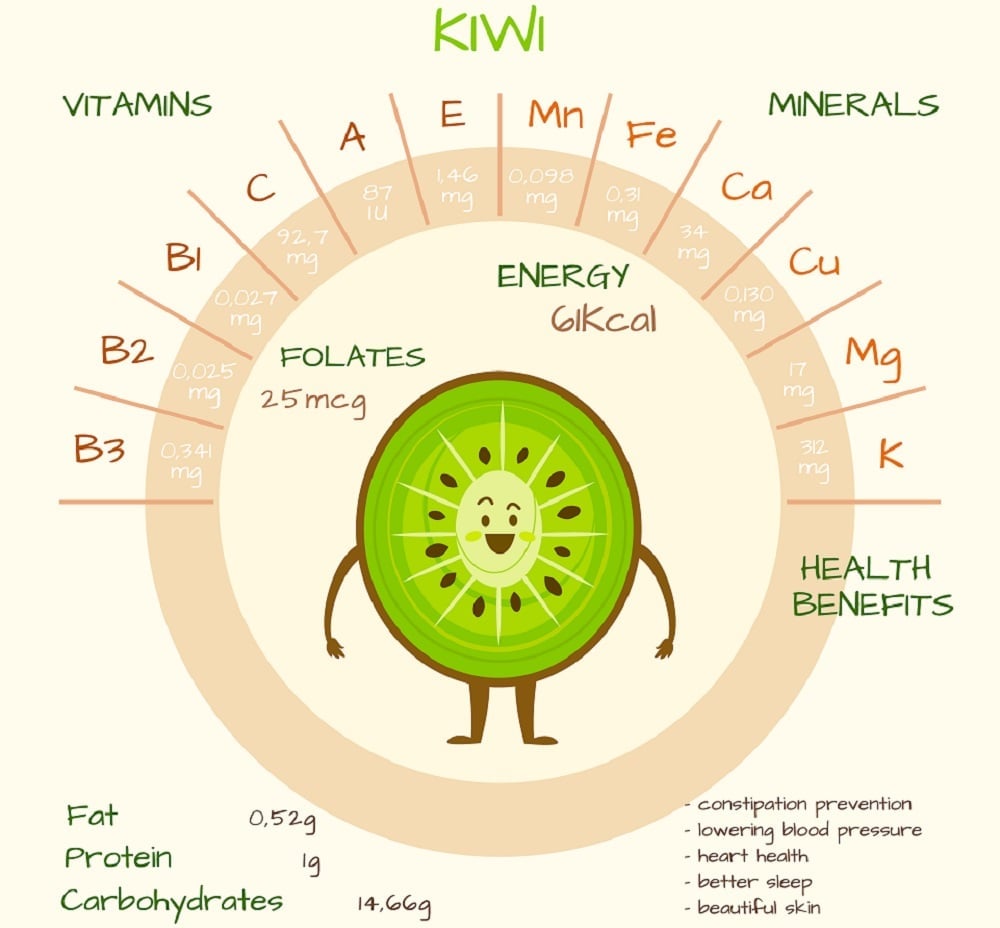 Kiwi is a nutrient-dense food, which means it’s high in nutrients and low in calories. There are many reasons to eat kiwi, beyond its sweet-tart taste.

The healthy nutrients found in kiwi include antioxidants, fiber, and vitamin C. These nutrients have been shown to provide several health benefits.

Health benefits of kiwi include:

You may not consider fruit a sleep aid, but kiwifruit can actually improve sleep. A 2011 study surveyed individuals with sleep problems and found they reported better sleep after eating kiwi.

One fuzzy kiwi provides 70-85% of the daily vitamin C requirement for adults. It also contains vitamin E, which is an antioxidant that helps protect and heal skin.

The fiber, antioxidants, and potassium in kiwi fruit can improve your heart’s health.

Potassium relaxes the blood vessels, which lowers blood pressure. One kiwi contains about 5% of the daily recommended potassium.

High levels of free radicals in the body are associated with higher cancer risk because it damages DNA. The antioxidants in kiwi include choline, lutein, and vitamin C.

Antioxidants remove free radicals from the body, which can reduce cancer risk. Fiber can also reduce the risk of colorectal cancer.

How to Clean Kiwi Fruit FAQ

Can you freeze kiwi fruit?

Kiwi will keep in the fridge for a few weeks in an airtight container. If you need it to keep longer, you can freeze kiwi. It’s most often sliced and then frozen, but you can freeze the whole fruit as well. There are some limitations, though. Frozen kiwi has a different texture than fresh kiwi. Frozen kiwi is fine for cooking or smoothies, but it’s not ideal to eat on its own or in a fruit salad. Fresh kiwi is a better option if kiwi is the focus.

What color is kiwi?

Fuzzy kiwi is also known as green kiwi fruit because the flesh is a bright green color. Some varieties of hardy and super hardy kiwi have a yellow flesh. Both have small black seeds, and are a great way to brighten up a dish.

How do you eat kiwi fruit?

There are several ways to eat kiwi fruit. It can be added to recipes to provide a bright flavor. Fresh kiwi can be eaten whole, or peeled and sliced. For a real treat, leave the skin on and dip the sliced kiwifruit in chocolate.

Do you need to clean kiwi fruit if you aren’t eating the peel?

Do you need to know how to clean kiwi fruit if you don’t plan on eating the peel? Yes. You should still clean the kiwi because the dirt and bacteria on the fruit can transfer to the knife. When you begin to slice the kiwi, the contaminants spread to the fruit you will be eating.

See also  What to Serve with Salmon?

What should you do with the kiwi peel?

The best thing to do with kiwi peel is to eat it. However, if you don’t want to eat the skin, you have a few options. Kiwi is great for compost. You can also toss the peels into your garden. As a last resort, you can toss the kiwi skin in the trash or garbage disposal.

When is the best time to eat kiwi fruit?

Should you wash organic kiwi fruit?

Yes. Organic kiwi might be free from pesticide residue, but it can still harbor dirt and bacteria. You should wash it just as you would nonorganic fruits and veggies.

Do kiwis grow on trees?

The kiwi plant is actually a vine. They are fast-growing and prolific, which makes kiwi a joy to grow. Fuzzy kiwis require a tropical environment, but hardy and super hardy kiwis can grow in colder climates.