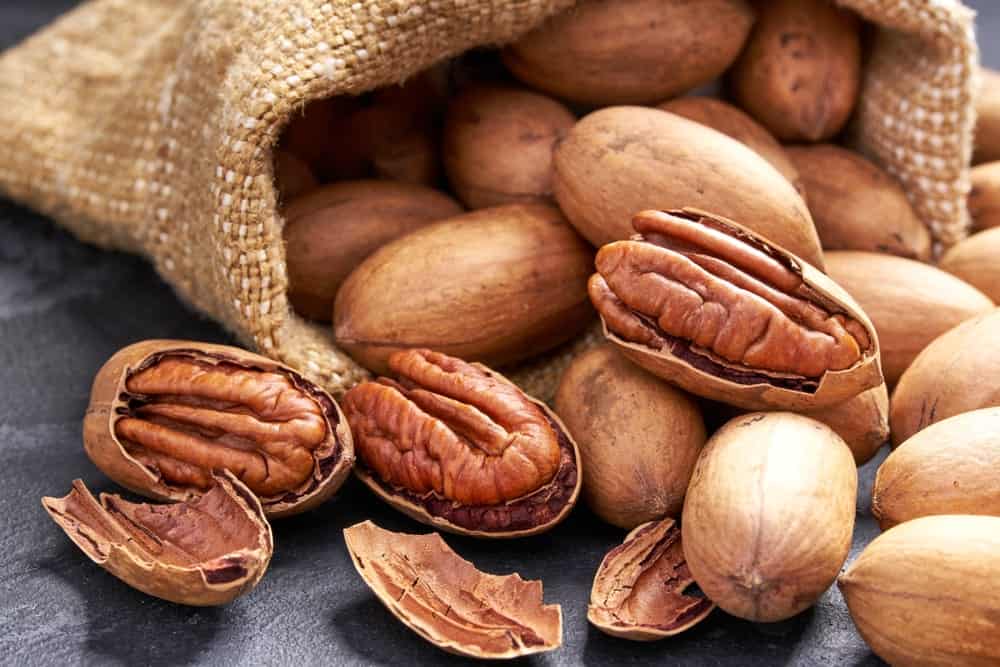 Pecans are one of the most recognizable types of nuts. They have a distinct look and a distinct taste. They can be roasted, chopped, glazed, baked, and candied, among other treatments. You can put pecans in pies, cakes, sweet treats of all kinds. But until you know how to candy, toast, spice, and glaze pecans, you don’t know everything you can do with these amazing, versatile nuts.

Pecans became known to the world around the 16th century. The word “pecan” comes from the Native American Algonquin word “pacane.” This means “nuts requiring a stone to crack,” or something close to that. Pecans were a major food source in pre-colonial America and were used as a form of currency among Native Americans. Pecans were even used to make a fermented drink known as powochicora.

Colonists began using pecans in the 1700s and by the 1800s, the nuts were used in commerce. Pecan orchards were planted and began to thrive. Pecan nuts have a slightly buttery flavor. They’re a large nut that is brown in color and has grooves on one side.

Pecan nuts became popular throughout the U.S. Pecan trees were present in the gardens of both George Washington and Thomas Jefferson, two of Ameria’s most well know founding fathers.

Pecans are the only major tree nut that grows natively in America. They haven’t been found growing naturally anywhere else in the world.

History of the Pecan

Cabeza de Vaca, a Spanish explorer, shipwrecked near Texas. He was the first European to taste pecans after being captured by a Native American tribe living in the area. French settlers first turned the nuts into a candy ingredient, using them in pralines in New Orleans in 1758. The first pecan trees that were planted intentionally were grown in Long Island, New York in 1772.

The first recipe for pecan pie, which is now a staple of southern U.S. cuisine, was published in 1886. The pecan tree was declared the official state tree of Texas in 1919. In 1982, Alabama declared the pecan as the official state nut. It became the official nut of Arkansas in 2008. And in 2016, the American Pecan Council was founded. This nut has become an important part of American culture and American food. If you learn how to roast, toast, glaze, and candy this nut, you will be a master of sweet treats. 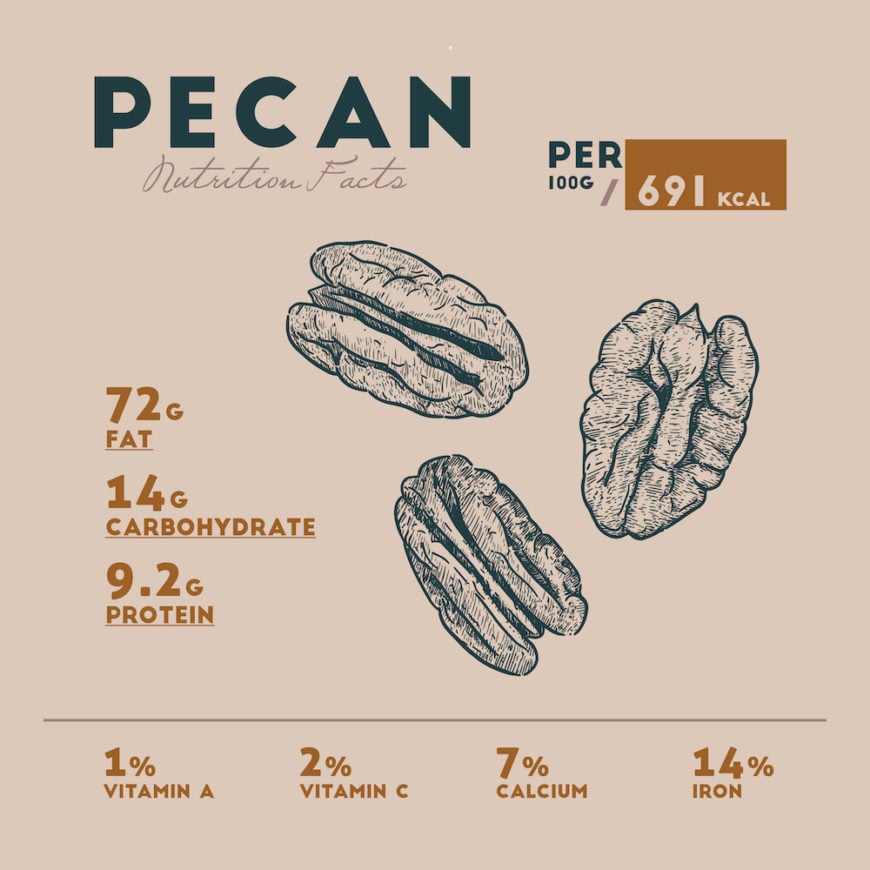 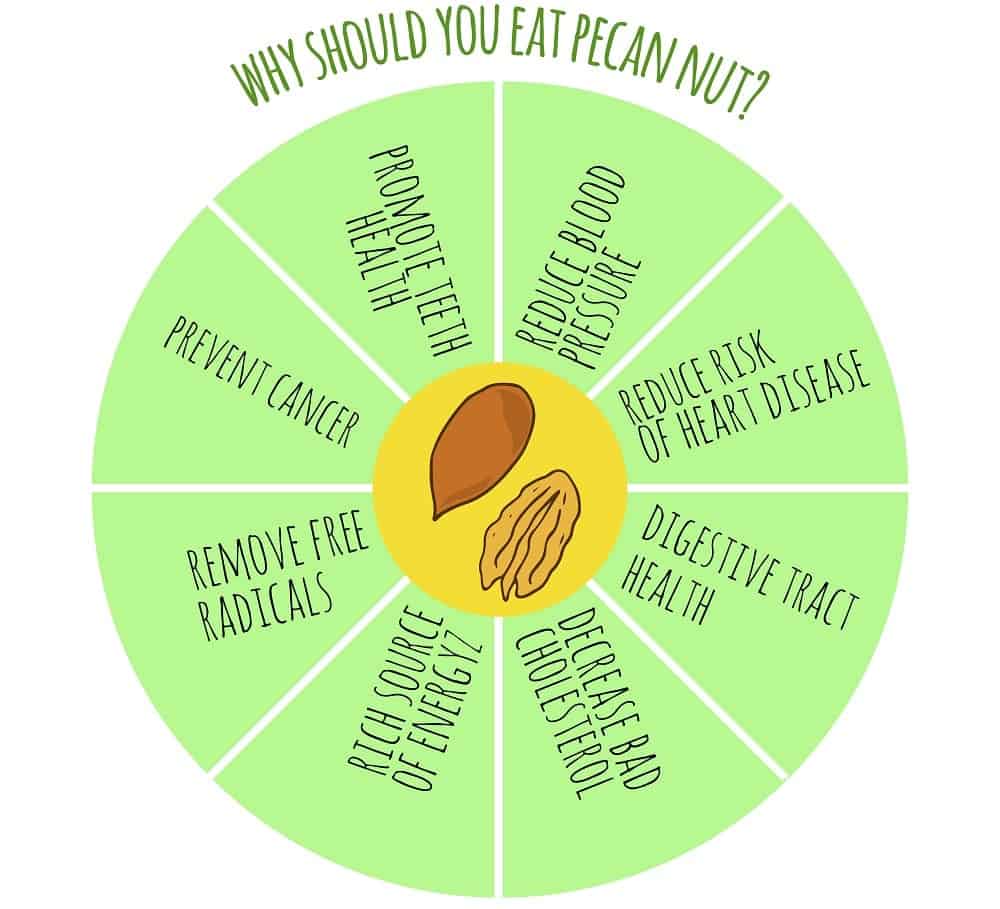 A quarter cup of pecans is about 188 calories and 19 grams of fat. This serving size has about 3.8 grams of carbohydrates and 2.5 grams of protein. You’ll also get about two grams of fiber from this serving.

How to Toast Pecans

Toasting or roasting pecans is a great way to bring out the natural flavor of the nut and enhance the taste. You can roast pecans and eat them still warm from the oven for a delicious treat. 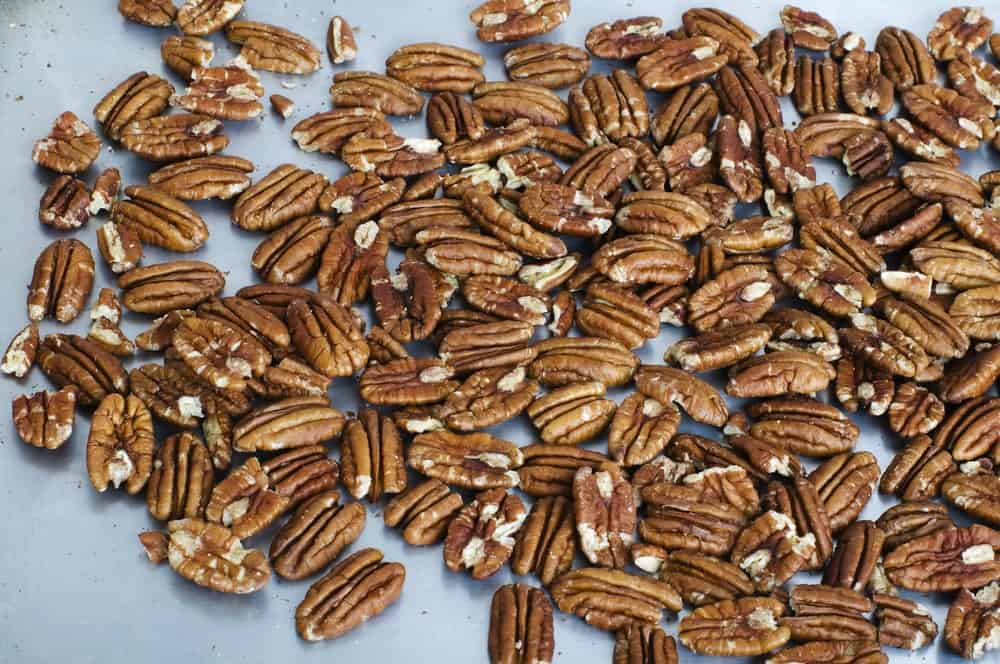 To roast pecans in the oven, preheat the oven to about 300 degrees. You can toss the pecans in a little melted butter or oil before spreading them out on a baking sheet, or you can brush the liquid on. You can also leave the pecans to try and roast them this way but they will toast more quickly without butter or oil, so keep an eye on them. Pecans only need to be in the oven for about 5 to 10 minutes before they’re nice and toasted and tasty. Shake the nuts once, after a few minutes of toasting, so they roast up evenly in the oven.

You can also roast your pecans right on the stove using a skillet. Heat the pecans in a skillet over medium heat. Lightly toss the pecans until they darken. The smell of the nuts will also intensify. This process takes two to five minutes.

How to Make Candied Pecans

Once you know how to make toasted pecans in the oven or on the stove, you can do anything with your pecans. Now, you can make candied pecans, spiced pecans, and glazed pecans that are a delightful, simple treat. It takes only minutes to turn these nuts into a tasty treat that’s either savory or sweet.

Make candied pecans by mixing one cup of white sugar with one teaspoon of cinnamon and a pinch of salt. Mix these dry ingredients together in a large bowl. In a separate bowl, whisk one egg white with one tablespoon of water. Coat the pecans in the egg wash mixture. 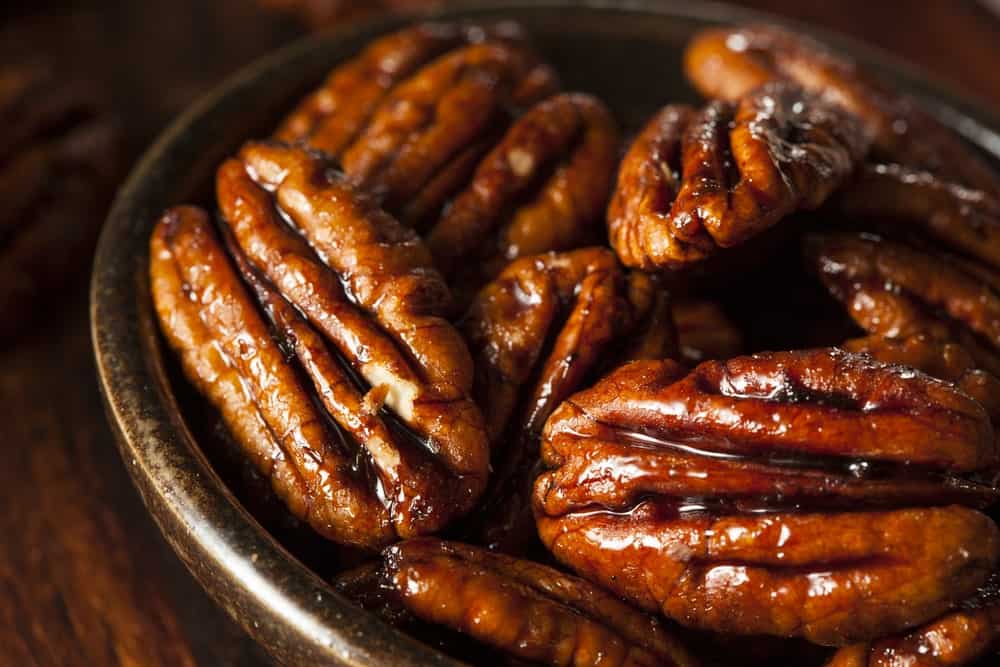 Next, pour the sugar mixture into the bowl and stir pecans evenly until they’re evenly coated with the sugar and cinnamon. Spread your pecans on a baking sheet and brown them in the oven at 250 degrees. It will take about an hour for the candied pecans to turn brown. Stir and flip the nuts occasionally during the browning process. When the pecans cool, they will be a delicious treat.

To make candied pecans in a skillet on the stovetop, mix the sugar and cinnamon in the skillet, add some water and a little brown sugar, and use low heat on the mixture until it dissolves. Once the mixture is melted and bubbling, add your pecan halves and get them evenly coated with the mixture. Let them cook in the skillet for about five minutes. Remove them from the heat and spread them on wax paper and a baking pan to cool. Once the nuts cool, they will be nicely candied.

You can play around with different combinations of sugars and spices to make your own recipe for candied pecans. Have fun playing with the flavors and put your own twist on tasty candied nuts.

How to Make Spiced Pecans 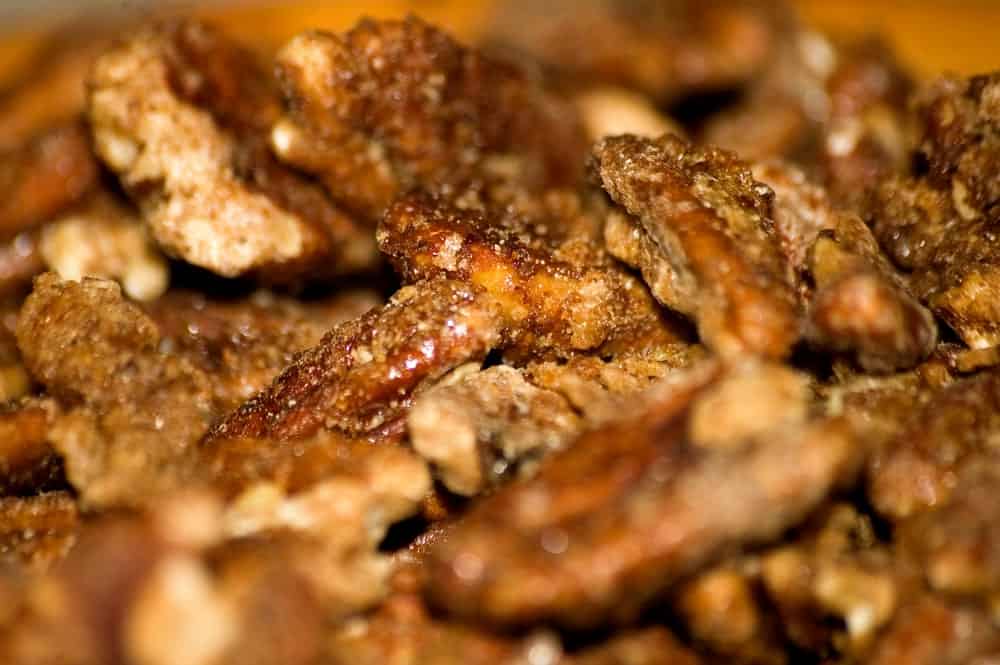 use the same method you use for candied pecans to make spiced pecans, with slightly altered recipes. Instead of granulated white sugar, use confectioner’s sugar. Skip the cinnamon and add spices like cayenne pepper to your mixture instead. A little black pepper won’t hurt the recipe, either. You’ll want to add about a teaspoon of salt as well. The spices will help take the sweetness out of the sugar, leaving a spicy kick of flavor.

Experiment with spices like cumin, cloves, and other strong flavors to create spiced pecans that pack a punch of flavor.

How to Make Glazed Pecans 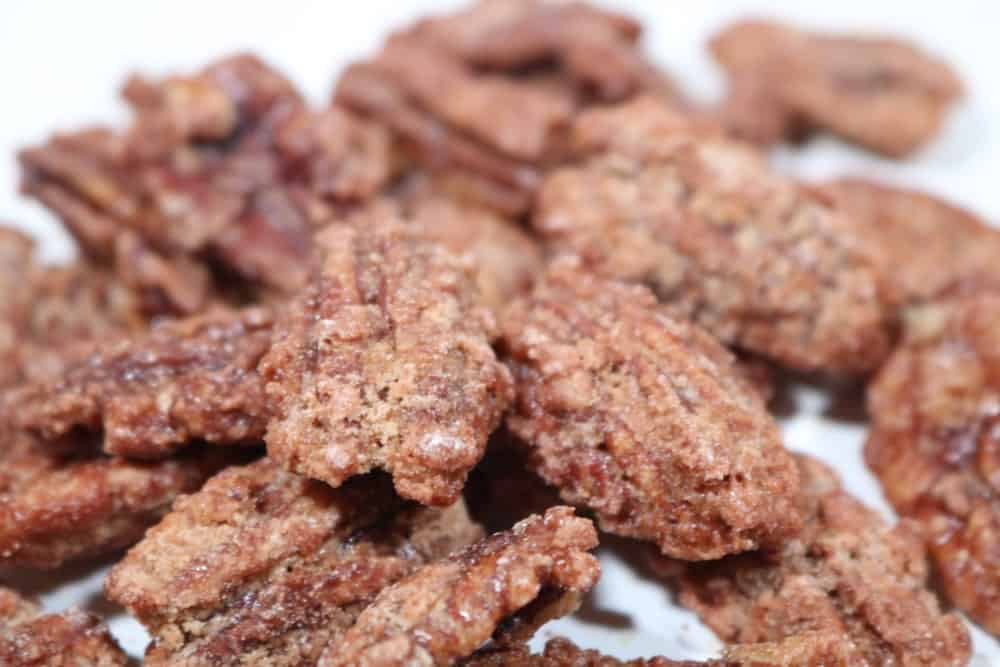 Spread the pecans on a  baking sheet and cook them in the oven at 350 degrees for about 30 minutes. When they’re cool, you’ll have beautifully glazed pecans that will taste like delicious candy treats.

Once you know how to toast pecans, you can start experimenting with making sweet and savory nut treats. Play around with different flavors and make your own pecan recipes. Soon, you’ll be a master of the pecan, the great American nut.