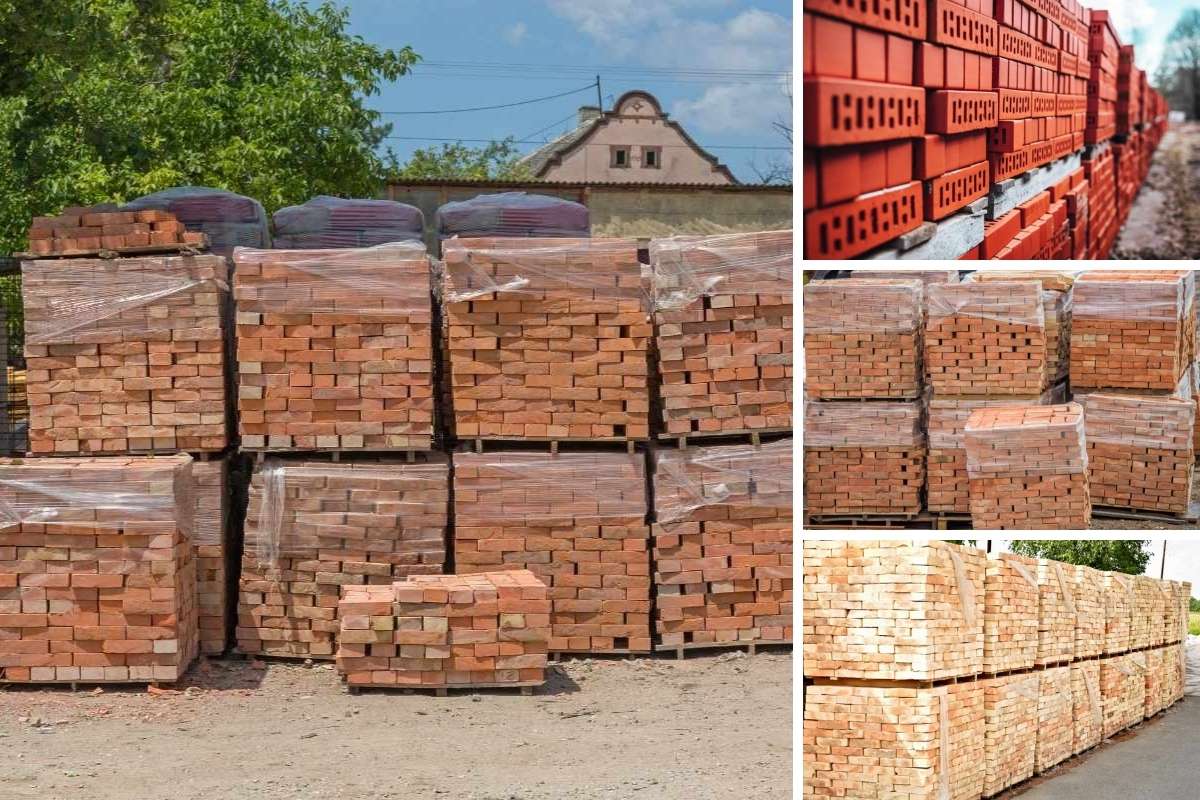 A standard brick weighs about 2000 grams and a regular pallet can hold just over 530 of them. The total number of bricks that can be stored on a pallet is determined by the bricks’ weight and size, plus the pallet’s overall specs. Expect about one ton of bricks for each pallet.

Bricks aren’t lightweight, so it isn’t easy to picture a lot of them on a pallet. However, the pallets are built to handle the pressure. Of course, bricks come in different sizes hence the importance of going by weight rather than numbers.

For many years, bricks have been the preferred construction material. They require little in the way of upkeep yet always impress. Due to their unique character as historical artifacts, reclaimed bricks are currently in high demand.

Let’s jump on the scale to see how bricks are fitted on a pallet and how much weight and number of bricks the different pallets can handle.

Table of Contents Show
How Many Bricks Are on a Pallet?
What Exactly Is A Pallet?
What Quantity of Red Bricks Can a Pallet Contain?
Stacking Bricks for Shipping
The Weight Of A Full Pallet Of Bricks
Exteriors with Face Bricks Look Fantastic
Uniformity in Pallet Sizes

How Many Bricks Are on a Pallet?

As a rule of thumb, a pallet can hold anywhere from 500 to 600 bricks. A typical bricklaying workforce can lay 3,000 bricks each day, which equates to about 5-6 pallets of bricks per day. The average weight of a typical brick is 4.3 pounds.

One layer of 113 regular bricks would weigh 486 lbs., as was previously stated. In light of this, it’s easy to see how quickly mass may accumulate when you begin piling things up. A standard, five-level brick pallet would weigh about 2,430 lb.

Approximately a quarter of a ton of bricks. Pallets are often overlooked until it’s time to build a warehouse or ship a large number of bricks for a new mall or residential project. Brick is heavy, so architects and homeowners that choose to deal with it are aware of this.

If you’re wondering, “How much would a pallet of bricks weigh?” while preparing for a remodel or new construction, you should budget for somewhat more than a ton per pallet of bricks.

What Exactly Is A Pallet? 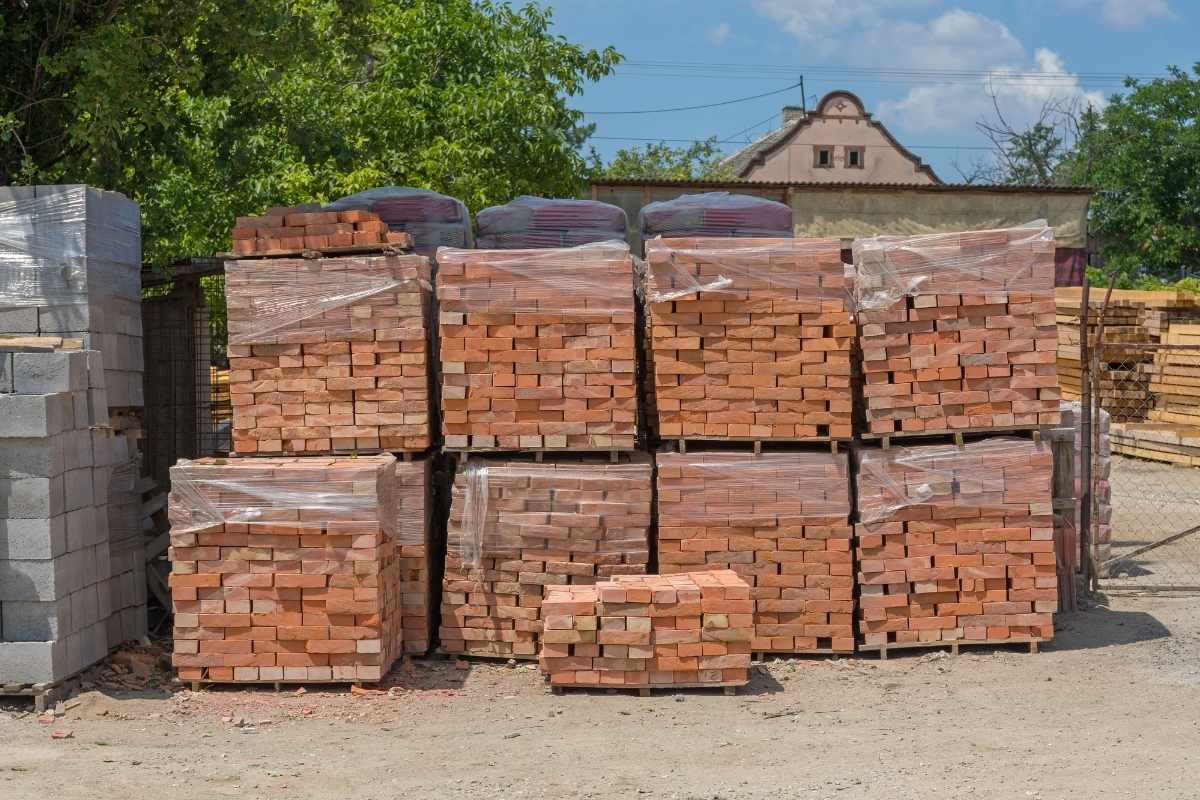 A pallet is a flat, low platform constructed of plastic or wood that is used to convey items. Pallets are versatile and can be used to safely transport a wide variety of goods, including those that pose a serious health risk if handled improperly. Pallets also find applications in the fields of logistics, storage, and warehousing.

They are typically produced in standard sizes but can be altered to meet the needs of a certain application. Pallets can be constructed from a variety of materials, including wood, plastic, and metal, and come in a wide range of sizes and forms to accommodate the goods they are meant to transport. Most commonly used are pallets constructed from 1,000-kilogram rated timber slats; these are compact enough to be handled by hand but sturdy enough to support significant weight.

It’s also possible to find a wide range of pallets based on the industry they serve and the nation they were built in. Boards are the most frequent sort of conventional wood pallet, but pallet sizes can vary greatly depending on whether the shipment is going internationally or locally. Metal, plastic, wood, concrete, brick, clay, and many more materials can use to construct pallets.

There are always two parts to a pallet: the base, and the top, which is where the handling apparatus is located. Some examples of these parts are a wooden pallet.

What Quantity of Red Bricks Can a Pallet Contain? 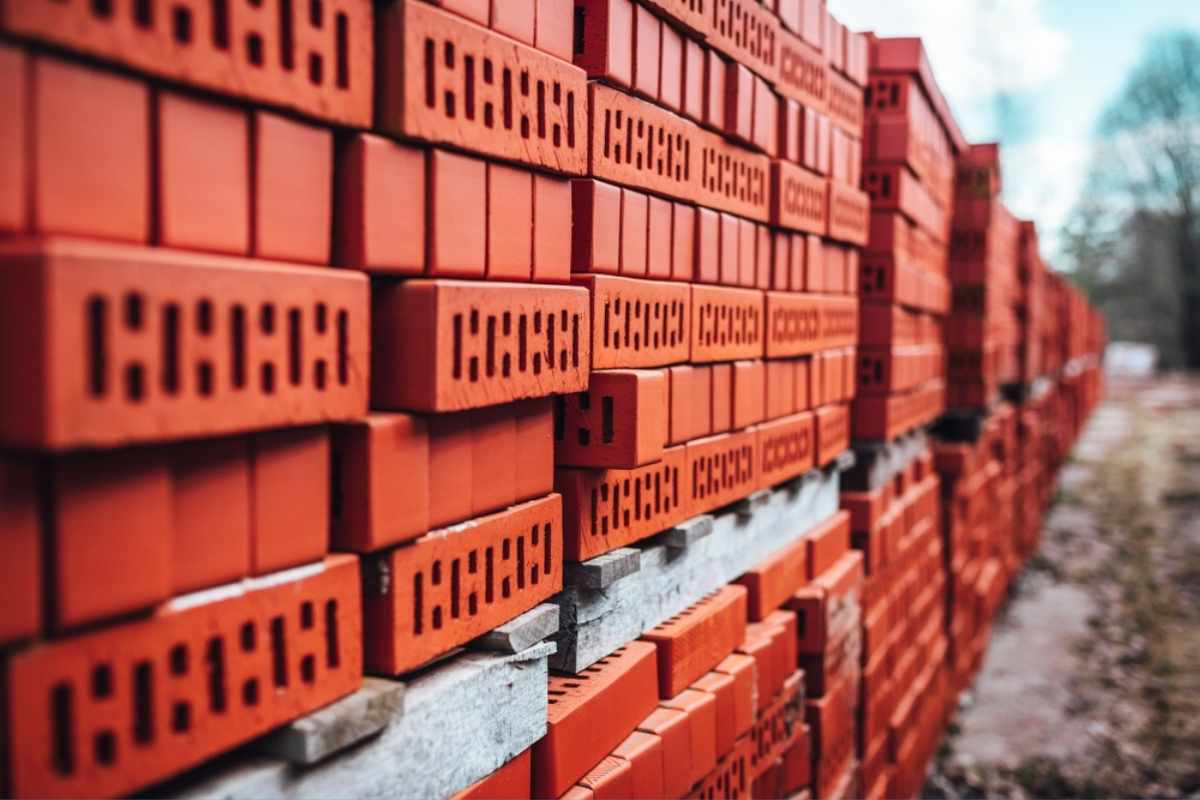 Each size of the pallet has a corresponding maximum load capacity. The composition of a wall can be deduced from a single brick’s length. Only when the wall or function of a pallet deviates from conventional uses of pallets will variation be observed.

The most popular type of wooden pallet is the conventional wooden slat with a weight capacity of 1,000 pounds, which can support about 1.5 tons. Because of the limitations of manual pallet jacks and forklifts, these boards must be rather compact. 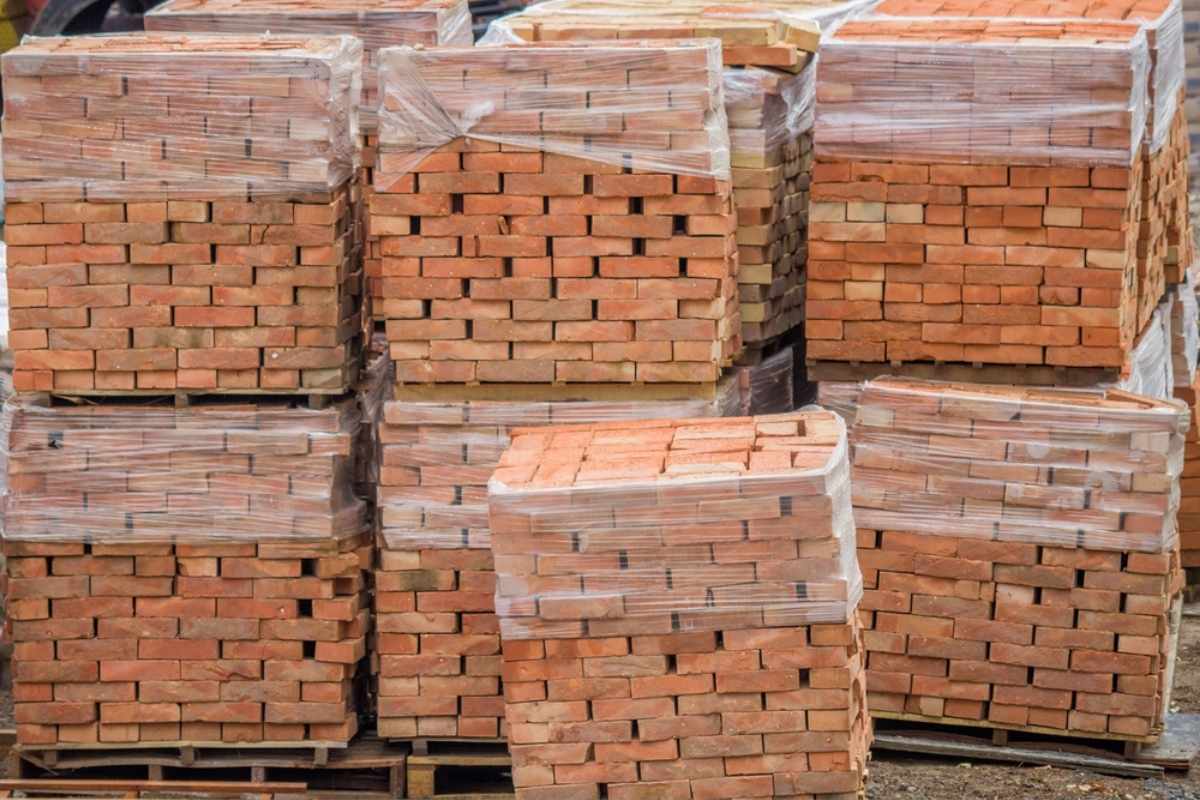 Standard wooden pallets are rarely utilized for heavy loads due to their limited weight capacity, despite their larger size. Wooden pallets can only hold so much weight, but luckily there are other options, like plastic and aluminum. A basic plastic pallet rated at 1,000 kilograms can support up to 2.5 tons, whereas a board rated at 2,000 kilograms can hold up to four tons.

Metal pallets outlast plastic and wood varieties, but their greater production costs translate into a higher final price. The 4,000-pound slat and the 6-ton estimate are two more common sizes.

The Weight Of A Full Pallet Of Bricks

About 500 bricks can be found on a typical brick pallet. Bricks intended for use in construction are among the most common. Bricks are widely used by construction crews because of their modularity, ventilation, durability, and ease of repair.

Also, they never wear out or break. All the beautiful old buildings in any historic district were constructed out of brick. Bricks can be expensive and cumbersome due to their weight and the abundance of other materials required.

Bricks used in building projects typically have holes cut out of the core to make them lighter. Cored brick is a frequent name for certain types of bricks. The overall cost of construction is reduced but architects and builders still have access to the superior structural stability afforded by using bricks on the interior of structures.

Bricks used for the edges and exteriors of buildings, known as “face bricks,” are in constant view of the property’s owners. The quality of face bricks varies widely, but in general, they are sturdy and well-made. Typically, the cost of face bricks is more than that of other siding options.

Despite this, there are tangible benefits to using bricks for outside walls. They are visually striking and give a home an aura of quality and antiquity that no other siding can equal. Additionally, they aid in temperature maintenance, which can ultimately lead to reduced energy costs for the building.

One can find factory mass-produced face bricks at a neighborhood home improvement store. Small, specialized brick entities can also be a good place to look for these materials because they often harvest bricks from old buildings set for destruction, clean them up, and then resell them at a premium. Since they are solid, face bricks are heavier than cored bricks.

We need more information about the average weight of bricks on a pallet now that we know there are varying weights and brick types. 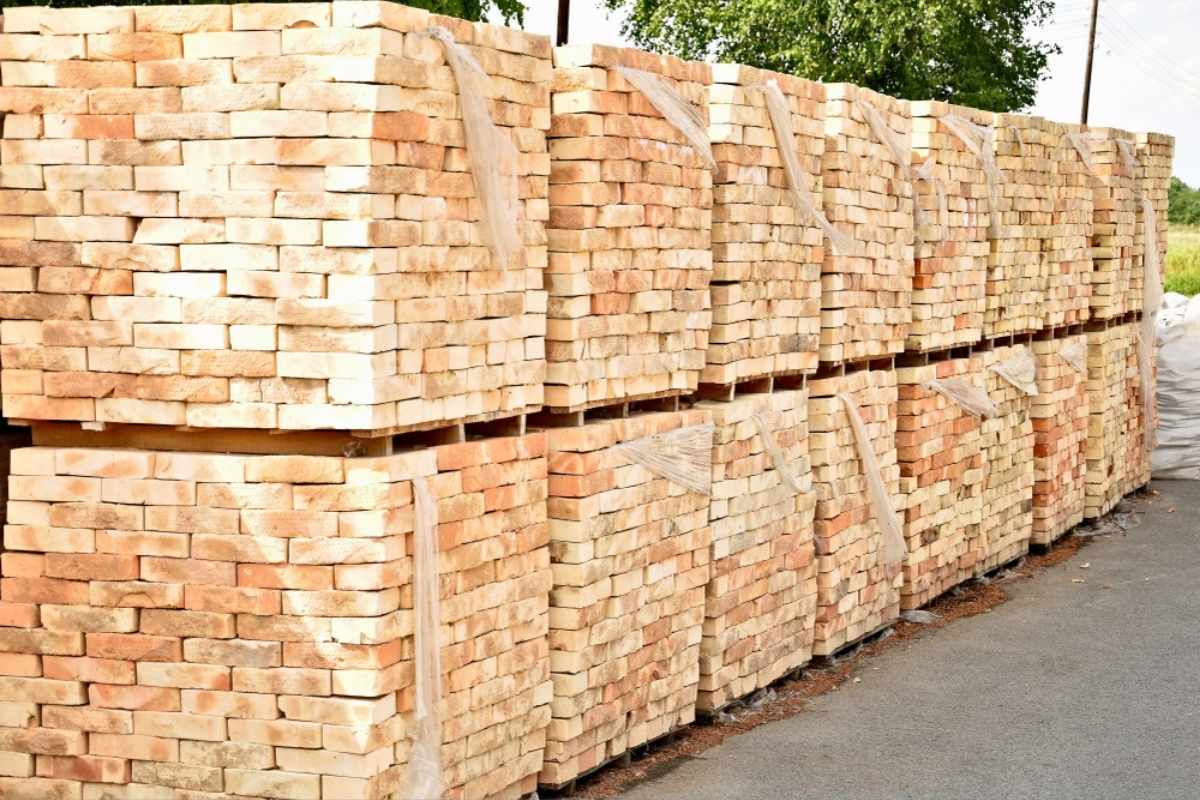 Years ago, every factory and warehouse had its definition of what defines a pallet. It was all dependent on the definition of a palette that was ultimately chosen. With the help of the Grocery Manufacturers’ Association (GMA), the majority of pallets in America are now of a uniform size.

The percentage of GMA in the US pallet market is low, at around 30% as of a few years ago. In today’s increasingly standardized business world, the difference between two products could be as little as the extra padding. Pallet sizes vary depending on whether you’re shipping automobiles, beverages, or military supplies.

Pallet sizes for bricks are typically 40 inches by 48 inches. This area is equivalent to 1,920 square inches. The area of a pallet can be covered with approximately 113 bricks, assuming that each brick is eight inches in length as well as 2¼” wide.

From there, you can stack the bricks higher on the load capacities of the various modes of transportation used in the shipping process. There are typically 500 bricks in each pallet, therefore there will be four or five stacks of bricks. Remember that the weight of your pallets may vary depending on the material they’re constructed out of.

While wooden ones are the norm, plastic ones are lighter and less expensive. One can expect longer life from plastic pallets. There are also metal ones available.

The load capacity of a pallet is a major factor in determining the type of pallet to be used.