Every year at special holidays, people grace their food-laden tables with a variety of tasty dishes. One that is often the star of the show is a delicious, savory, juicy ham. While many people choose to purchase a pre-glazed ham or one that has a packaged glaze along with the ham, you can make this tasty dish without any of that. Making a ham glaze is fairly simple and only adds a couple of steps to the baking of a ham. You can try our recipe for Honey and Pineapple Glazed Ham and treat your family to a tasty ham whenever the occasion arises. 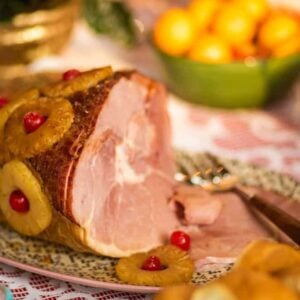 April Freeman
Salty and sweet are a wonderful flavor combination, and glazing a ham provides it. Hams are cured with a mixture of spices and lots of salt. While some people like ham with no glaze, adding a glaze just pumps up the flavor profile. Our recipe has a fruity tang to it by use of pineapple juice in the glaze. We also add a little Dijon mustard to give the glaze a surprising savory twist.
Print Recipe Pin Recipe Add to Collection Go to Collections
Prep Time 20 mins
Baking Time 1 hr
Total Time 1 hr 20 mins
Cuisine American
Servings 10 Servings

Hams are made from pork. They are typically made from one of the hind legs of the pig. After the animal is slaughtered and the carcass is sliced up, the legs that are intended to be made into hams are cured by either being rubbed in copious amounts of salt along with nitrates, or by being soaked in a saltwater solution. Both methods produce a distinctive pink-red color in the meat, which is typically white before this procedure.  If you are serving a large group of people in your home for a holiday or another celebration, you may have wondered exactly how to calculate how much ham you should buy. After all, a good host never runs short of the main dish before everyone has had their fill. For a boneless ham, you should shop for about one third of a pound per person. For a bone-in ham, about one-half of a pound per person should be enough. Following this guideline will help you avoid running short or having the opposite problem–having so much ham that you end up eating leftover ham until you are sick of it. If you do end up with a little too much ham at the end of your party, there are several ways to avoid wasting the food. First, you can make soup with it. Bean soups and potato soup are very good with the addition of ham. Second, consider making a breakfast with ham and cheese omelets or a breakfast casserole that has ham in the recipe. Third, ham sandwiches are a great way to use up leftovers in lunch boxes. Finally, if you have tried all the above, and you’re still stuck with too much ham, you can seal the leftovers in a zip-top freezer bag and stash it in the freezer for up to three months. You can pull out the leftovers on a night when you don’t have time to cook and serve it with a couple of vegetables as side dishes. Our recipe uses a fairly small ham that is only 3 or 4 pounds. If you choose a larger ham to serve a bigger party, just multiply the quantities by a factor of 2 or 3. Follow the instructions in the exact same way, except you should carefully calculate the increased amount of cooking time that you will need since your ham will be larger.
Keyword Honey and Pineapple Glazed Ham, Main Course, Recipe