Soft, rich, and slightly sweet, Hokkaido Milk Bread has a texture that is unmatched. Popular in Asian bakeries, this bread has its distinctive texture due to the usage of a tangzhong, a cooked starter. The tangzhong is cooked to the consistency of pudding before it is incorporated into the dough.

A staple at Asian bakeries, Hokkaido is created by beginning with a cooked starter, also called a tangzhong. This mixture is created by mixing together flour, milk, and water and cooking it on the stove until it is thick and pudding-like in texture. This starter makes the bread soft and springy. 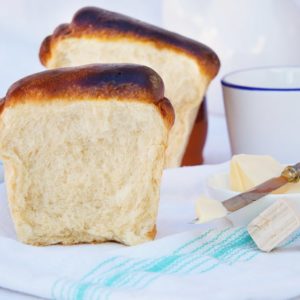 When you cook flour and liquid together, something magical happens in the molecular structure of the mixture. The starch in the flour becomes something like gelatin but doesn’t form any gluten. This enables the flour to absorb more liquid than it would otherwise. When you can keep plenty of moisture in the bread dough, the end result is a soft, light, and tender loaf. Beginning with a tangzhong is a popular bread-making method that is frequently used in Asian baking. The dough for this bread is kneaded in the bowl of a mixer with a dough hook. If you have made bread before, you may think that the dough is too sticky and will need extra flour. Try to avoid adding any excess flour. The long kneading time can actually help the dough come together in a soft and shiny dough that is the perfect texture. Adding extra flour will just keep the dough from being as soft and fluffy as it should be. This bread dough is shaped slightly differently than many that you may have made. The dough is divided into fourths and each section is rolled up cinnamon roll style and placed into the pan in different sections. This shaping gives the bread loaf a lovely, unusual shape after it rises and is baked.
Keyword Bread, Breakfast, Recipe