While potatoes have gotten a bad rap in the last few years, the reality is that almost everyone can enjoy them as a part of a balanced diet. This recipe for Herb Roasted Parmesan Potatoes combines the flavors of red potatoes with the skins on, olive oil, and fresh herbs. 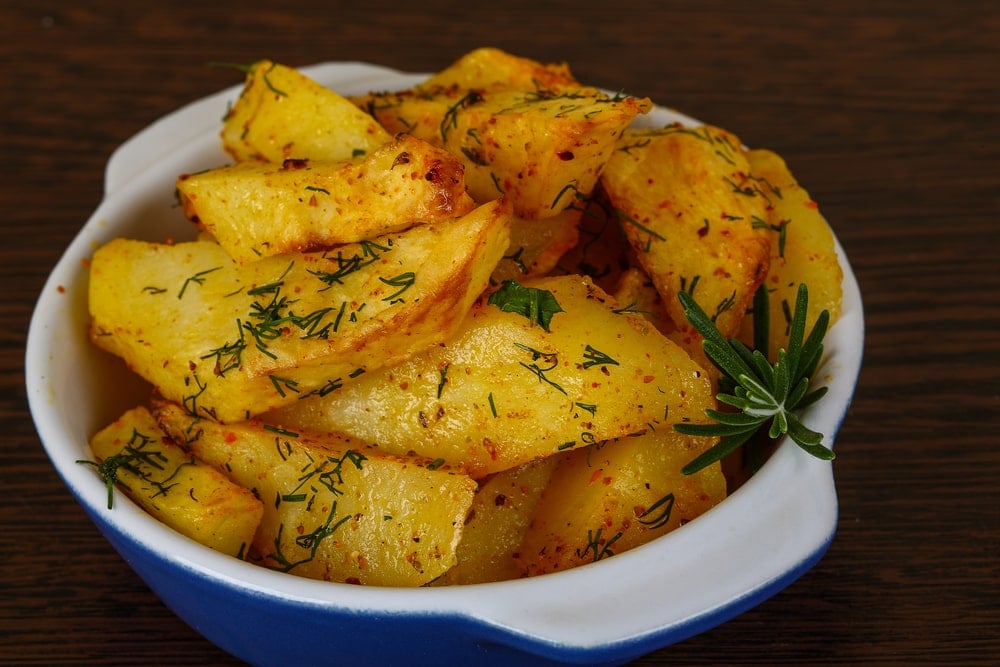 While the potato has gotten a lot of bad press in the past five to ten years, this root vegetable has historically done great things for certain societies. Potatoes were originally discovered and cultivated by primitive human societies in the Andes Mountains of South America around 5000 BC. The Inca people group cultivated potatoes as a food crop, and this plentiful food item allowed them to multiply and conquer other indigenous people groups in South America. When the Inca was defeated by the Spanish conquistadors in the late 1500s, the victorious Spanish soldiers brought several varieties of potatoes back to Europe. 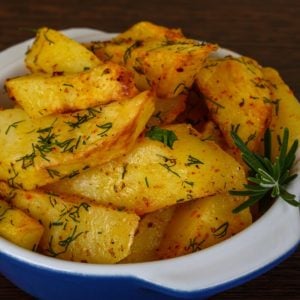 Homestratosphere's Editorial Staff & Writers
Everyone needs a few recipes in their repertoire that are easy to make and can be put together in just a few minutes with a handful of ingredients that are on hand most of the time. This recipe for Herbed Roasted Parmesan Potatoes is one of those kinds of recipes. It’s perfect for a dinner for a company or a simple night at home after work. This recipe takes basic potatoes and dresses them up with the flavors of olive oil, herbs, and cheese.
Print Recipe Pin Recipe Add to Collection Go to Collections

It only took about 40 years for potatoes to spread all across the European continent, becoming staple food items for people from Russia all across Europe to Scotland. Farmers in Europe learned that it was easier to grow potatoes than grains, and the harvest from a single acre of potatoes could sustain about ten people. Poor people in places like Scotland and Ireland began to greatly depend on potatoes to feed their families because of their high yields as well as the fact that potato cultivation doesn’t require extensive equipment other than a spade and a gardening fork. Unfortunately, because these people only grew a single variety of potato, massive crop failures caused the starvations of about a million people in places like Ireland and Scotland when a disease affected the most common variety of potato grown in these areas. While many people died in the famine, many others, faced with the hopelessness of their situations, immigrated to Canada and the United States. For those who focus on “low-carb” dieting, potatoes are not permitted. But for the rest of us, potatoes are a simple, easy starch that can help round out a meal. Many people consume potatoes in fried form, as in French Fries. Baked potatoes and mashed potatoes are also favorite ways of preparing potatoes. This potato recipe roasts the potatoes with olive oil to assist in browning the spuds, and adds various herbs as well as Parmesan cheese to provide a new flavor twist for the humble potato. Our recipe features red potatoes with the skins on. Leaving the skins on provides a delightful color to the dish as well as an interesting texture, as the skins brown slightly and crisp in the oven. If you like, you can use a thin-skinned yellow potato as well. Normal russet potatoes are an acceptable substitute, but they will be much softer and mealier after cooking. You will be definitely better off to go ahead and purchase a waxier, firmer potato. A nice thing about this recipe is that it makes a great make-ahead dish. You can do all of the prep work–slice the potatoes, toss them in oil and salt, and stir in the herbs–and then place them in a covered dish in the fridge for up to a full day before cooking them. It’s a great dish to serve with an accompanying protein, like when you’re grilling out or when you’ve made a roast of some sort.
Keyword Herb Roasted Parmesan Potato, Recipe, Side Dish

See More RecipesClick Here for All Our Recipes
27 shares