Consisting of layers of chocolate, nuts, and coconut in a graham cracker crust with a gooey base, this recipe for Hello Dolly Bars is rich, decadent, and delicious. With just a handful of ingredients, you can throw this recipe together in just a few minutes. 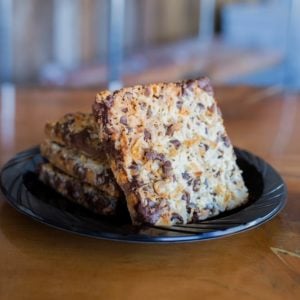 April Freeman
Rich and sweet, featuring layers of coconut, chocolate, and pecans, this recipe for Hello Dolly Bars seems like it should take hours of effort to prepare. This recipe will likely become your secret dessert for potlucks or fancy dinners. Despite the fact that it only takes a few minutes to prepare, your friends and family will enjoy every scrumptious, decadent bite.
Print Recipe Pin Recipe Add to Collection Go to Collections
Prep Time 10 mins
Baking Time 30 mins
Total Time 40 mins
Course Snack Recipes
Cuisine American
Servings 20 Squares

The magic of this recipe is due to the use of sweetened, condensed milk. This ingredient cooks along with the other ingredients to create a gooey, sweet base for the whole dessert. Be sure to choose the correct ingredient when you are shopping. Often, sweetened condensed milk is found near the evaporated milk and the two ingredients are not interchangeable. Sweetened condensed milk is milk in which much of the water is cooked away and sugar is added. Evaporated milk is simply milk that has had much of the water removed, but it is not sweetened. If you use evaporated milk, this recipe will not turn out the way that you want it to. This recipe can easily be adapted for your own tastes. If you are less of a chocolate fan and prefer peanut butter, swap out the chocolate chips for peanut butter chips and switch the pecans for chopped peanuts. If you want to try something a little more unusual, you may want to experiment with using butterscotch chips in place of the chocolate chips. Even white chocolate chips could be a great substitution in this recipe. If you use white chocolate chips, you can try to exchange macadamia nuts instead of pecans. When you begin to play around with this recipe, you should feel free to use whatever nuts that you have on hand as well.
Keyword Hello Dolly Bars, Recipe, Snack

April Freeman enjoys creating all kinds of recipes for her friends and family from her country kitchen in Middle Tennessee. She and her family raise beef cattle, chickens, and all sorts of fruits and veggies on their farm, and she specializes in featuring farm-fresh foods in the recipes that she creates and serves. April says that her slogan is "Are you hungry?" and she feels that one way of showing love and connecting with others is to serve delicious favorite foods to others. Her favorite thing to cook is pies of all kinds.
Scroll to Top