You may be wondering, what exactly is a scone? Many people in the United States have never enjoyed the taste of a delectable scone, warm from the oven. Scones are somewhat like a biscuit, and they are often served at tea time in England. Tea time is a light meal that generally occurs in the late afternoon between lunch and dinner. 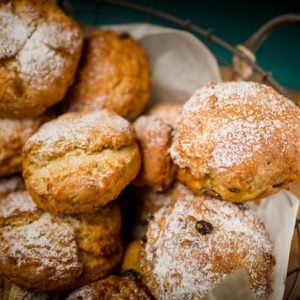 April Freeman
Scones sound like a fancy bread that is served in the United Kingdom with a pot of tea and some fancy teacups, but you do not have to go overseas to enjoy a wonderful batch of scones. Our recipe for Pear and Ginger Scones is fruity, slightly sweet, and flavored with the spices of cinnamon, ginger, and allspice.
Print Recipe Pin Recipe Add to Collection Go to Collections
Prep Time 15 mins
Baking Time 20 mins
Total Time 35 mins
Cuisine British
Servings 8 Scones

Scones can be sweet or savory. Savory scones may have cheese, ham, and herbs incorporated in them. Sweet scones sometimes have fruit or spices mixed into the dough, and they may be served with cream or jam. Some scones may have a kind of lightly sweetened glaze on the top to add a bit more sweetness and add to their visual appeal. Our recipe for Pear and Ginger Scones is a sweet scone that incorporates the flavor and texture of pears and the spices of ginger, cinnamon, and allspice. Our recipe calls for canned pears, which work very well in the recipe. However, because canned pears are very juicy, we include instructions to drain and pat the pears dry so as to minimize the amount of extra moisture in the scones. If you have fresh pears on hand, just peel, core, and chop them, and then, you can incorporate them into the scones in the same manner as the canned pears. The main thing to remember when making scones is to handle the dough gently. No beating or whipping of this dough! Just gently stir the wet ingredients into the dry ones just until the dough sticks together. Then use your hands to pat and shape the dough into a circle and cut the circle into wedges.
Keyword Ginger and Pear Scones, Recipe, Snack