While many people love baking from scratch, one thing that many people use a mix to create is the humble brownie. Often, when home bakers attempt brownies a few times, the results are less than impressive. The brownies may taste too bitter or not chocolatey enough. 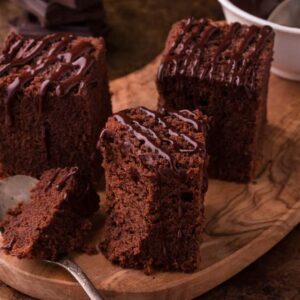 April Freeman
Thick, chewy, and loaded with chocolate flavor, this recipe for Fudgy Brownies is the one to reach for when you have a serious chocolate craving. Whether you eat them warm out of the oven, pull them from a lunchbox at room temperature, or cover them in vanilla ice cream and hot fudge sauce, these brownies are going to be a family favorite for sure.
Print Recipe Pin Recipe Add to Collection Go to Collections
Prep Time 20 mins
Baking Time 55 mins
Total Time 1 hr 15 mins
Cuisine American
Servings 24 2-Inch Brownies

Generally, the texture isn’t what is wanted. Some recipes make the brownies too much like cake, while others are too dry. Failures like this force bakers to turn to boxed mixes. After all, it’s often cheaper, quicker, and easier to just add some eggs, oil, and water to a pre-made mix, stir, and pop the pan in the oven. However, you can make a batch of homemade brownies that are just as good, if not better, than a boxed brownie mix with our recipe. Our recipe has the perfect balance of moisture, chocolate flavor, sweetness, and chewy texture.  Our recipe uses the typical kind of baking cocoa that you will find in just about every grocery store in the baking aisle. Did you know, however, that there are two different kinds of cocoa available in the grocery store? In many places you can find both natural cocoa powder and what is called “Dutch process” cocoa powder. Both kinds of cocoa are made from cocoa beans that are harvested, dried, roasted, and ground into a dry powder. However, Dutch-process cocoa beans go through a washing process that neutralizes the natural acids found in the beans. This means that when you use Dutch-process cocoa for baking, the chemistry might be off if the recipe isn’t calibrated for Dutch-process cocoa powder. Recipes made with Dutch-process cocoa powder use baking powder and don’t need baking soda at all. Dutch-process cocoa dissolves more easily than natural cocoa and gives baked goods a darker color and a more mellow flavor.  Recipes made for natural cocoa will feature baking soda which neutralizes the acids in the cocoa and helps the baked goods rise. Our recipe for Fudgy Brownies uses natural cocoa, and therefore, baking soda is added to the batter to neutralize the acids found in the cocoa.
Keyword Dessert, Fudgy Brownies, Recipe