Bleeding hearts belong to Dicentra genus and are scientifically known as Lamprocapnos spectabilis. Bleeding hearts are herbaceous perennials native to eastern Asia and North America. They grow in hardy zones of 3-9 and are 6 inches to 3 feet tall and 1-3 feet wide when mature.

Bleeding hearts have attractive divided leaves with loose branching clusters of delicate, heart-shaped flowers dangling on their stem. Bleeding hearts bloom for 4-6 weeks in mid-to-late spring and are shades of pink, red, or white. 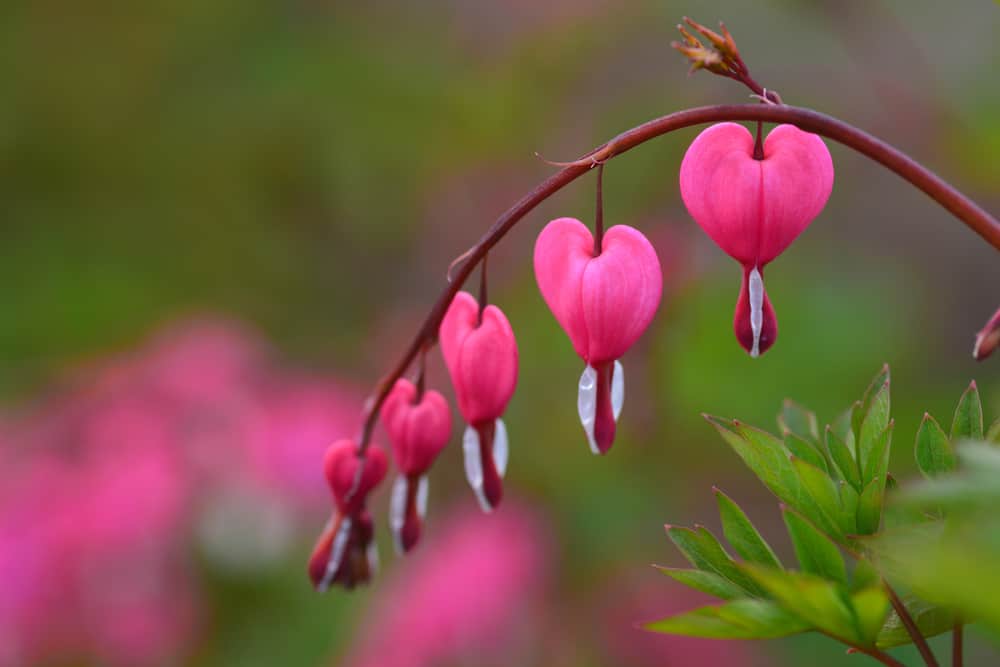 However, squirrel corn has different foliage and uses to bleeding hearts.

Squirrel corn is used as a tonic and diuretic and in the treatment of syphilis.

Blue corydalis has finely divided, lacy green leaves with slender upright stems. In mid-spring, distinctive, long-spurred, tubular bright blue flowers dangle above its foliage. Each stem of the blue corydalis can have up to 10 flowers.

Blue corydalis resembles bleeding hearts, but their blooms are blue.

Blue corydalis thrives in part to full shade. It also has similar soil, and water needs to bleeding hearts (well-drained and humus-rich soil, with average watering).

Lungwort belongs to the Pulmonaria spp. Genus. Lungwort is an herbaceous perennial native to Europe and Asia. Lungwort is hardy to zones 4-8 and grows 6-12 inches tall and 12-18 inches wide.

Lungwort thrives in temperatures of 60°F-65°F and prefers shaded areas. Lungwort grows best in organically rich, humus soil, with a moderate amount of water to keep the soil constantly moist.

Hosta spp. is a popular herbaceous perennial native to China, Japan, Korea, and Russia. Hosta is simple to grow. They are hardy to zones 3-9 and grows to 6-48 inches tall and up to 6 feet wide.

Hosta is clump-forming perennials adored for their foliage. The Hosta’s foliage is long and sword-like to large and round with corrugated textures, and the leaves vary from green to deep blue-green with chartreuse yellow centers. Hosta has long stalks producing white, lavender, or pink blooms in late spring.

Hosta can survive in full shade but does best in a few hours of dappled sun each day. Hosta likes rich and fertile soil that is well-draining. Like bleeding hearts, Hosta needs soil that is constantly moist but not wet.

Hosta is an edible plant used in Japanese cuisine.

Anemone sylvestris. is an herbaceous perennial native to North America. Snowdrop anemone is hardy to zones 3-8 and grows 18 inches tall.

Snowdrop anemone is used as a floral groundcover.

Pericallis cruenta is a buyout daisy-like flower in the Asteraceae family, commonly known as cineraria. Cineraria is a tender, spring-blooming perennial native to the Azores and the Canary Islands. Cineraria is hardy to zones 9-11 and grows up to 5 feet tall.

Cineraria is valued for its long-lasting blooms and wide array of colors. Cineraria has star-shaped flowers in zesty single or bi-colors of white, bright pink, blood orange, red, magenta, and royal blue.

Cineraria thrives in temperatures of 50°F-65°F.

Cineraria should be planted in rich, moist, and well-draining soil in areas with partial shade or full shade. Cineraria thrives when regularly watered; keep the soil moist but not too wet.  Cineraria has similar sun, water, and soil requirements as bleeding hearts.

Cineraria is used as a topical treatment to treat cataracts.

Heuchera is a genus of evergreen perennials in the family Saxifragaceae, and are native to North America. Coral bells have a hardiness zone of 4-8. Coral bells are 8-18 inches tall and 12-24 inches wide when mature.

Coral bells form woody crowns at their base with round, lobed, hairy leaves in an array of lime green, dark green, gold, mauve, or plum-burgundy leaves. In late spring, clusters of petite, bell-shaped flowers are adorned on tall stems, ranging in white, pink, coral, and red colors.

Coral bells look very different from bleeding hearts, but they are similar to bleeding hearts in four ways. First, they have identical sun, water, and soil requirements, and they have similar uses. Both plants thrive in part shade and prefer humus-rich, moist soil infused with organic matter. Both plants like soil that is well-draining and constantly moist, and both need to be well-watered.

Thalictrum rochebruneanum is a flowering perennial native to Japan. Meadow rue grows in hardy zones of 4-9 and grows 4-6 feet tall and 1-4 feet wide.

Meadow rue is cherished for its lacy bluish-green to chartreuse foliage and its wispy open inflorescences of nodding lilac flowers with prominent yellow centers.

An infusion of meadow rue’s leaves is used to treat fevers.

Impatiens spp. are tender perennial flowers native to Africa, Eurasia, and New Guinea. Impatiens are tropical perennials that can be grown as annuals if the temperatures aren’t too hot (zones 10-12). Impatiens grow in hardy zones of 2-11 and grows 6-36 inches tall and 1-3 feet wide.

Impatiens have long, dark green leaves with beautiful contrasting blooms. In addition, impatiens have irregularly shaped blooms that may be solitary or in small clusters. These darling blooms come in white, red, pink, coral, violet, purple, and yellow colors.

Impatiens thrive in temperatures of 50°F-70°F.

Impatiens should be planted in rich and well-draining soil and areas with partial shade or full shade. Impatiens thrive when regularly watered. Impatiens have similar sun, water, and soil requirements as bleeding hearts.

Impatiens have been used to treat skin ailments and stinging nettle rashes, and poison ivy toxicity.

The shooting star (Dodecatheon meadia) is an herbaceous perennial native to the Midwestern, Northeastern, and Southeastern United States. This beloved wildflower is hardy to zones 4-8 and grows 1-3 feet tall.

From each basal rosette of lance-shaped leaves come about 1-4 leafless flowers scapes. Atop each scape, the shooting star boasts 8-20 nodding umbels. Each flower has 5 swept-back petals and a cluster of bright yellow stamens that resemble wind-blown umbrellas. Once fertilized, the flowers turn upwards, giving them their famous name. These late-spring bloomers range in colors of white, pink, and light purple.

Shooting stars were used as a wash for sore eyes, but they are known and enjoyed for their unusual beauty.

Primula vulgaris is a short-lived perennial native to western and southern Europe, northwest Africa, and southwest Asia. Primrose is hardy to zones 4-8 and grows 6-20 inches tall and 8-20 inches wide.

Primrose flowers are used in desserts and confections, whereas the roots are infused to treat headaches.

Sanguinaria canadensis is a rhizomatous perennial native to the Eastern United States and Eastern Canada. Bloodroot is hardy to zones 3-8 and grows 5-12 inches tall and 10 inches wide.

Bloodroot is named for the dark red sap in the stem and leaves. In spring, the bloodroots boast solitary white flowers enhanced with showy yellow stamens. Bloodroots have 8-16 symmetrically arranged petals that unfurl in the sun and button up on cloudy days.

Bloodroot is often used as a topical or oral antibacterial agent.

Fuchsia is an evergreen shrub native to the Caribbean and northern South America. Fuchsia is hardy to zones 10-11 and mature to 1-2 feet tall.

Fuchsia has a relatively similar flower shape and color to bleeding hearts. Fuchsia is grown in part shade or full shade; and prefers rich, moist, and well-draining soil, making it similar to bleeding hearts. However, fuchsia thrives in rich, moist soil with a peat-based mix. Fuchsia grows best in temperatures of 55°F-80°F and needs average watering for optimal blooms.

Fuchsia is an ornamental flower, giving it a similar purpose to bleeding hearts.

Dutchman’s breeches have a similar flower shape to bleeding hearts, but their most apparent similarities are their sun, water, and soil needs.

Dutchman’s breeches are used to treat skin conditions such as syphilis.

Begonia semperflorens-Coltorum is an annual or warm-weather perennial native to Central and South America. Wax begonia has a hardiness zone of 10-11 and grows 6-18 inches tall and 6-12 inches wide.

Wax begonias thrive in temperatures above 60°F and prefer dappled sunlight. Wax begonias like rich, moist, and well-draining soil. Like bleeding hearts, Hosta needs soil that is constantly moist but not wet.

Dogtooth violets have used a source of starch and are used as a vegetable.

Helleborus spp. belongs to the Ranunculaceae family. Hellebore is an herbaceous perennial native to Caucasus and Turkey. Hellebore is hardy to zones 3-9 and grows 1-2 feet tall and 1-2 feet wide.

Hellebore has evergreen lobed foliage with prominent pink veins which gradually mature into a creamy color. In spring, hellebore stems shoot up above its foliage with face-down blooming flowers. Blooms are mostly white with pink or green tinting, but they come in pink, purple, and yellow shades.

Hellebore is quickly grown in humus-rich and moist soil, with full shade or partial shade. Hellebore requires a moderate amount of water; ensure that the soil is moist, not soggy, and wet.

Narcissus is a bulbous perennial also known as daffodils. Daffodils are native to Europe and Africa and grow 12-18 inches tall and 6-12 inches wide. Daffodils grow in hardy zones of 3-9.

Daffodils have deep green linear leaves and stem adorned with frilly cup-shaped blooms in yellow, white, orange, and red colors. Daffodils grace us with their flowers from mid to late spring.

Daffodils typically grow in temperatures between 60°F-70°F. Daffodils thrive in partial shade and in rich, moist soil that has to be well-draining. Daffodils require regular watering during springtime, but once daffodils stop blooming, they need less water.

Daffodils and bleeding hearts share the same hardy zones and have similar water and sun requirements.

English daisies require rich, loamy, and well-draining soil and thrive in partially shaded areas, with approximately 4-6 hours of sunlight per day. English daisies and bleeding hearts have similar water requirements, and they need regular watering to bloom and survive.

English daisies are edible flowers that can be used in salads. English daisies have also been used to treat menstrual cramps and urinary tract inflammation.

Freesia spp. is a perennial bulb or corm often grown as an annual. Freesia is native to Africa and has a hardiness zone of 9-10. Freesia grows 1-2 feet tall.

Freesias are mainly used in wedding bouquets, but they are also used in creams and candles due to their pleasant scent.

Polemonium caeruleum, is a clump-forming perennial native to Northern Asia and Europe. Greek valerian is hardy to zones 4-9 and grows between 12-24 inches tall and 12-24 inches wide.

Aconitum napellus is a tall, herbaceous perennial native to Europe and Asia. Monkshood is hardy to zones 3-9 and grows 2-4 feet tall and 1-2 feet wide.

Monkshood is used for ornamental purposes, similar to bleeding hearts.

Crocosmia has long, bright green, erect foliage. Crocosmia is a summer bloomer that showcases brilliant arrays of large, front-facing blooms in bright yellow or orange with a crimson-red eye.

Crocosmia typically grows in temperatures of 70°F-75°F, exposed to full or partial sun. Crocosmia is easily grown in humus-rich, moist, and well-draining soil. Crocosmia needs regular watering but should not be left waterlogged.

Crocosmia and bleeding hearts have similar soil and water requirements.

Crocosmia flowers are used to produce an edible yellow dye. East Africans also use the leaf sap and corms of crocosmia to treat malaria.

Rhodochiton atrosanguineus is a tender, perennial climber native to Mexico. Purple bell vine has a hardy zone of 9-10 and grows up to 10 feet tall.

Antirrhinum majus is a short-lived perennial usually grown as annuals. Snapdragon is native to Mediterranean Europe, Syria, and Turkey. Snapdragon is hardy to zones 7-11 and grows 6-48 inches tall, depending on the variety.

Snapdragon is commonly planted for its long-lasting blooms. From spring to fall, snapdragons are adored for their snout-shaped flowers, resembling a dragon’s snout. Snapdragon blooms are fragrant and come in various colors like white, yellow, pink, orange, red, purple, and violet.

Snapdragon plants have been used to treat inflammation as well as skin tumors and ulcers.