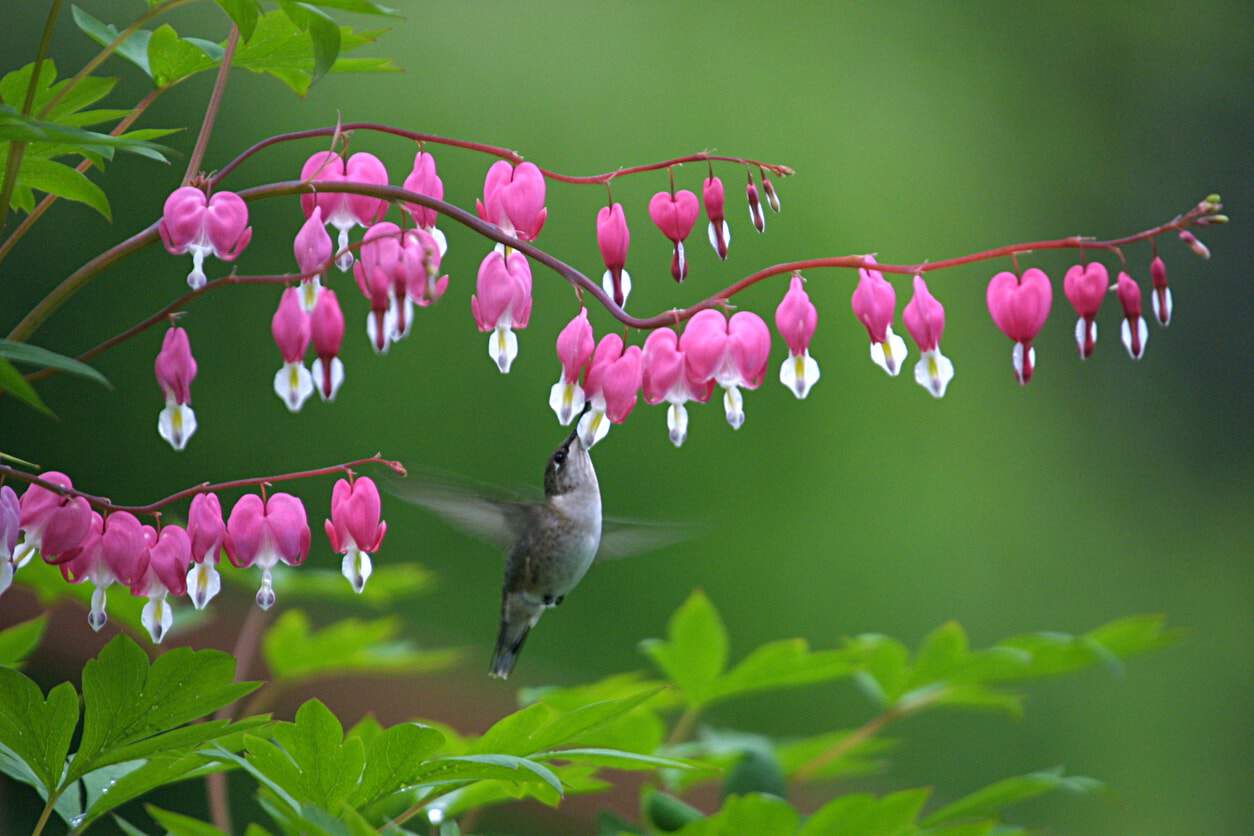 Beyond their fascinating acrobatics, hummingbirds are also great pollinators. Aside from being drawn to anything red, they are also attracted to nectar-rich gardens. Here are some plants that will draw more hummingbirds to your garden. 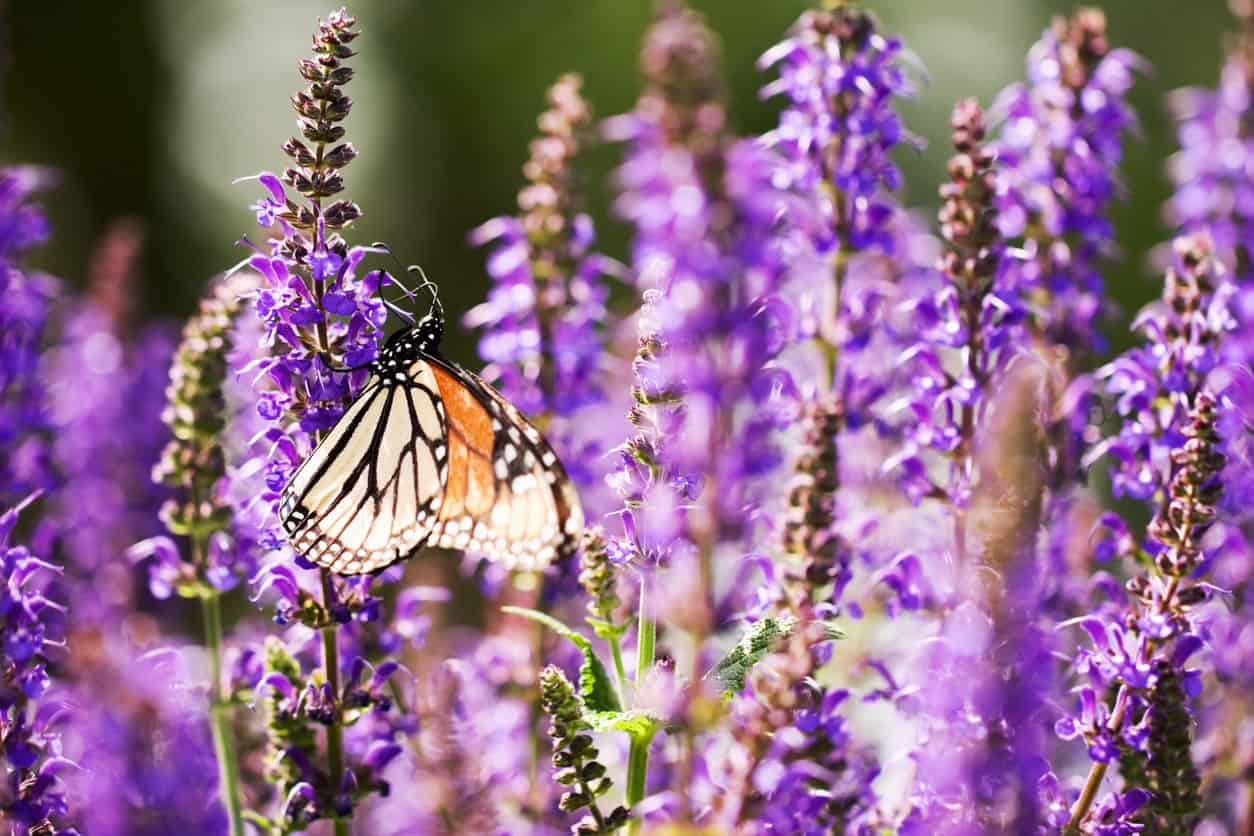 Hummingbirds will love the nectar-filled bright and tubular flowers of salvias. They are also available in red, purple, and pink varieties. They are quite easy to grow, whatever the variety. Just plant seeds in a sunny or slight sunny area with average soil. 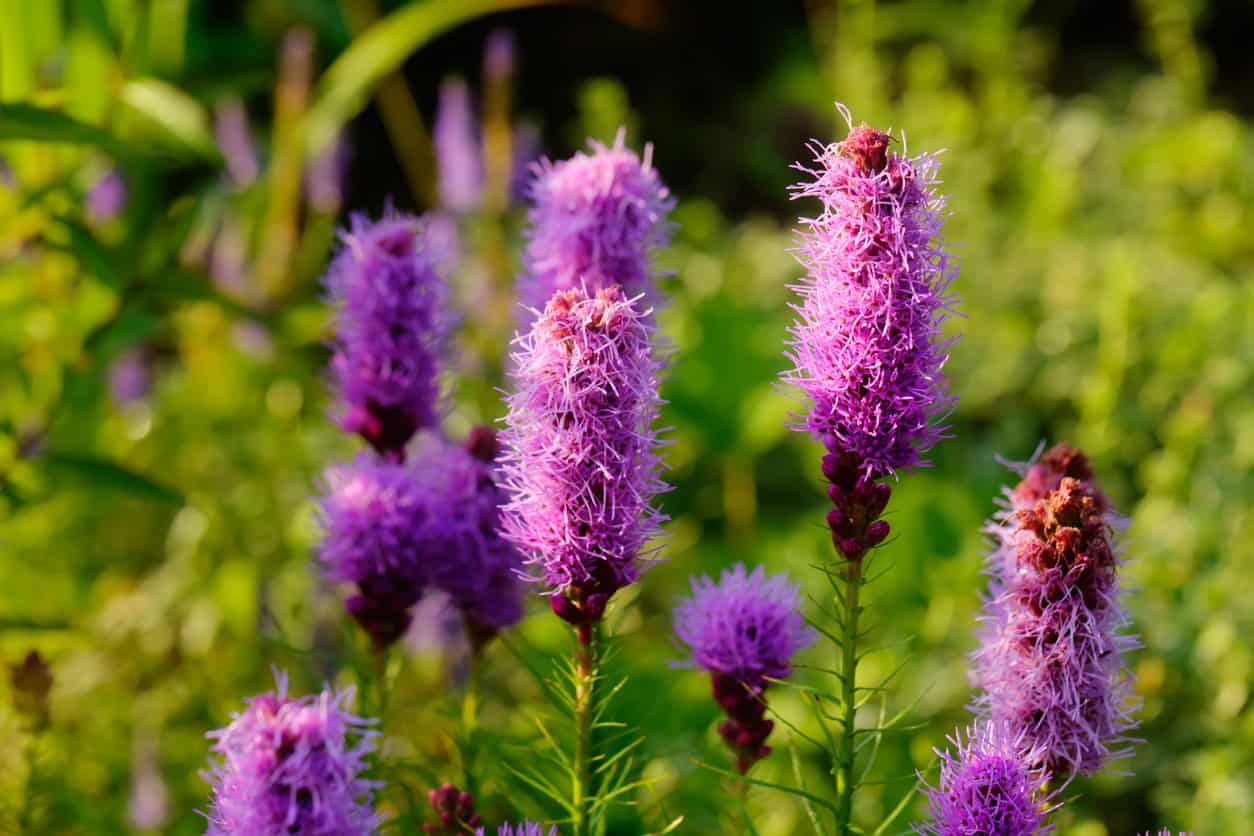 We are not the only ones, apparently, who are attracted to these stunning blooms. Keeping blazing stars in your homestead will lure the hummers over. These flowers grow perfectly in the wild. 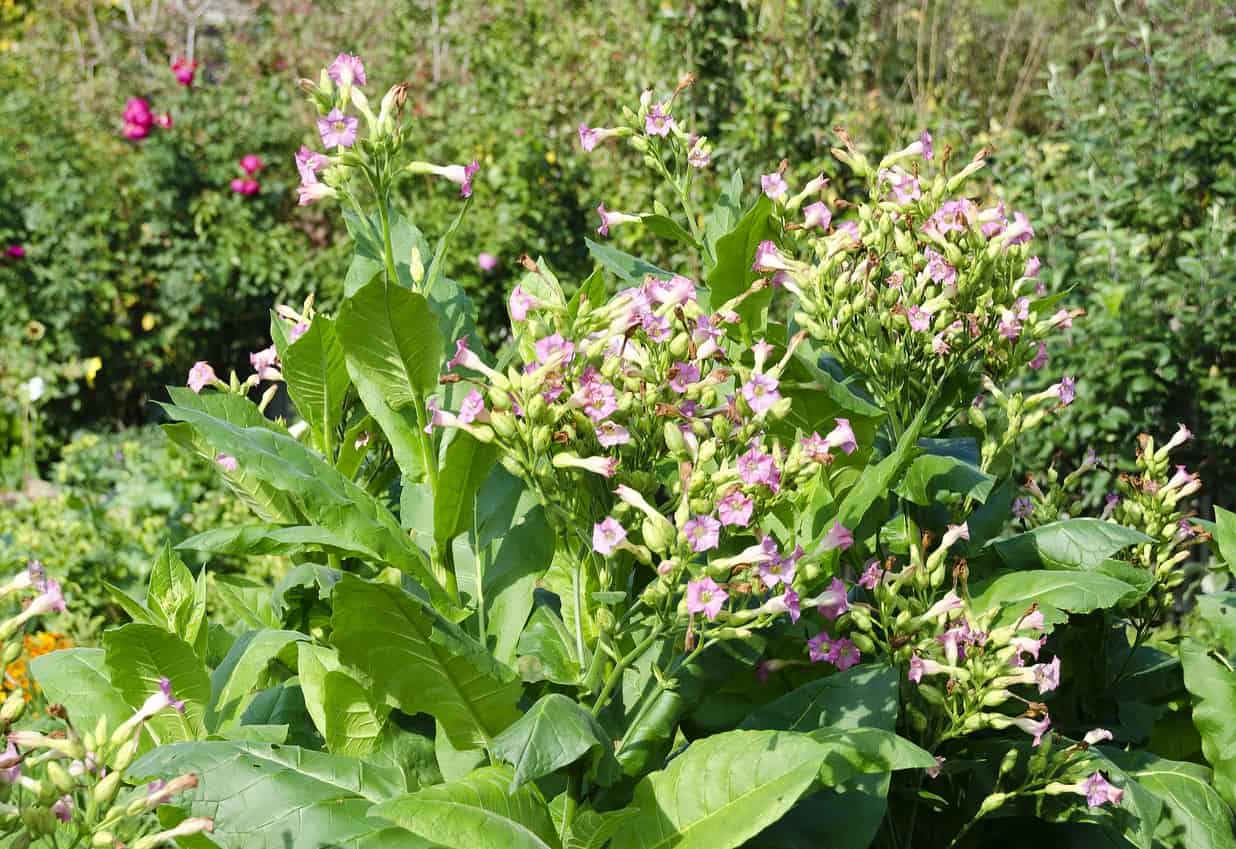 This tobacco species’ trumpet-shaped flowers bloom in the summer, catching the eyes of the hummingbirds. However, they have to work hard to get to the nectar, which is buried quite deep into the flowers. These flowers are often seen with dark pink, magenta light pink, and white colors, with the first two being more attractive to the birds.

Flowering tobaccos grow from seeds, but they bloom only for a short while as they wither under the summer sun. You can prolong their lives by planting them under partial shade. 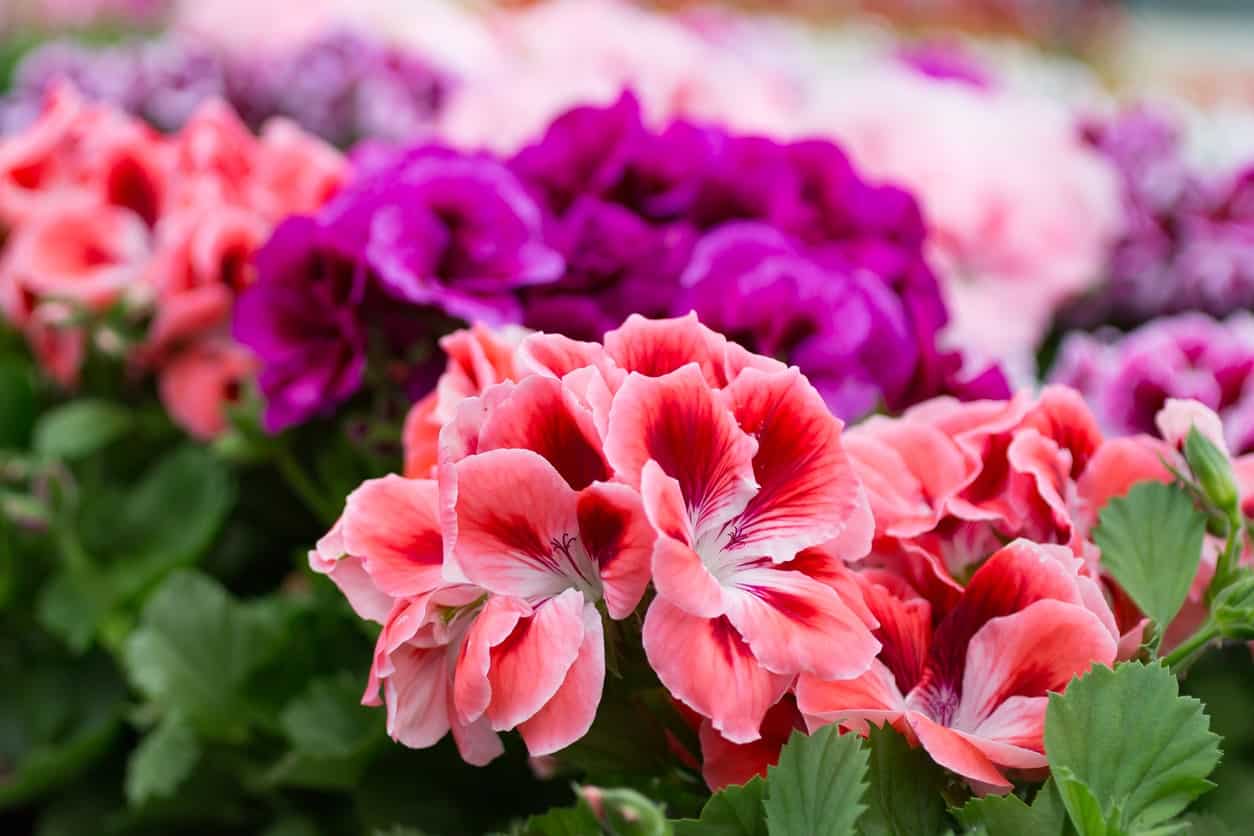 These often bear flowers found in peach, pink, and red, with red as the hummingbirds’ favorite. They are grown from cuttings that should be dried out well for one or two days before planting them in a pot. 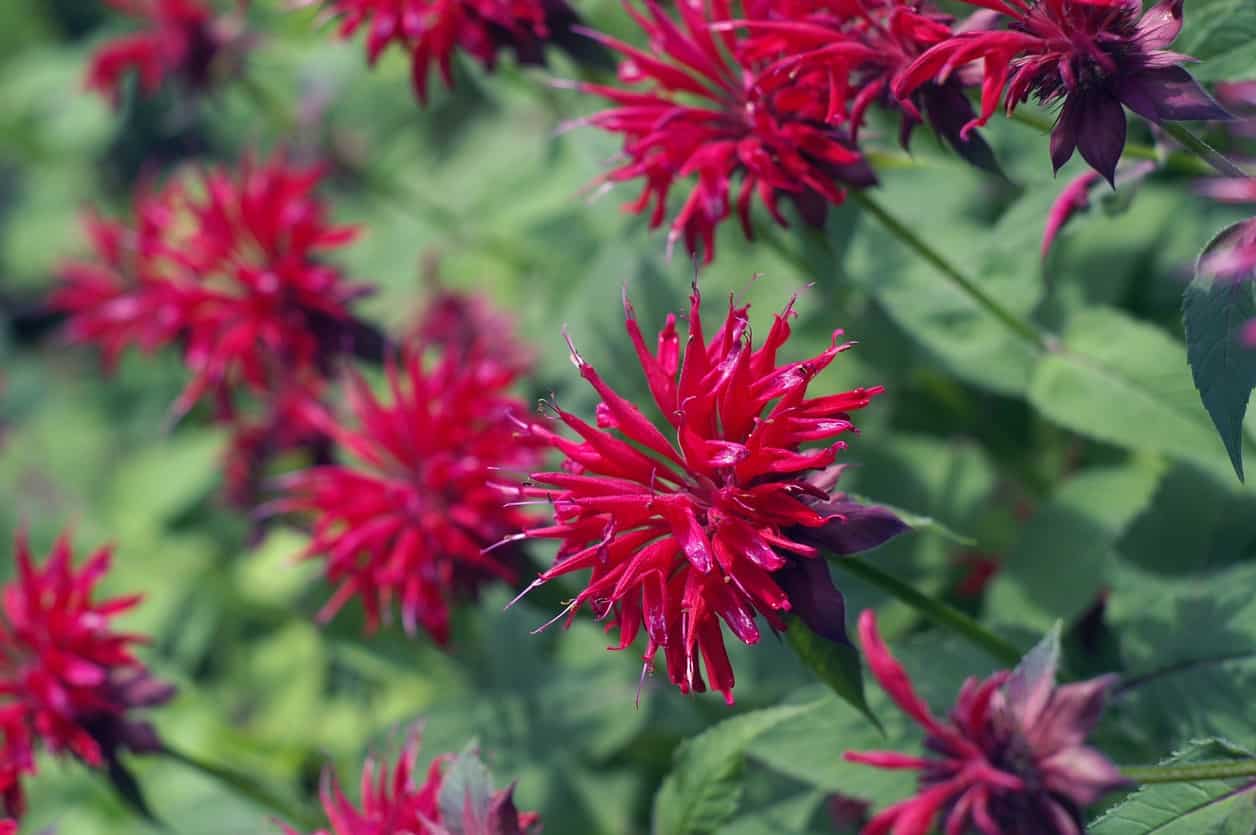 Its red flowers are guaranteed attractions to hummingbirds, on top of their tubular shapes with a nectar that can only be reached by these birds’ long and narrow beaks.

Plant bee balms in very rich, moist soul with lots of sunlight or partly shaded area in places with a tropical climate. Make sure to grow red, purple, and pink bee balms in groupings.

A bleeding heart is an interesting bloom with an interesting name. It certainly attracts hummingbirds. These blooms thrive in cold seasons and you can count on them for a dazzling garden landscape during winter. 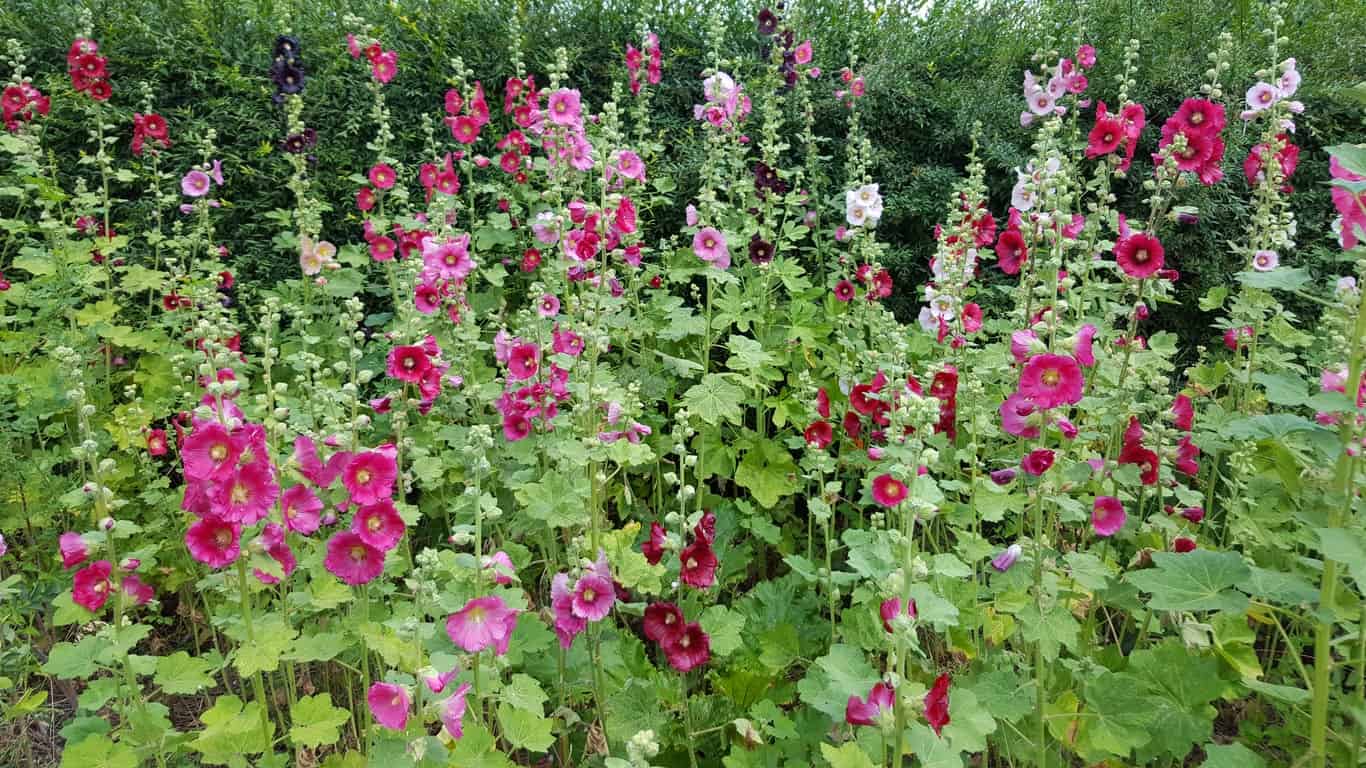 These are best planted if you want a small cottage atmosphere around the house. They are tall so the hummingbirds love them, especially those with burgundy and almost red flowers. They only live for about two to three years, but you can plant their seeds to grow some more. 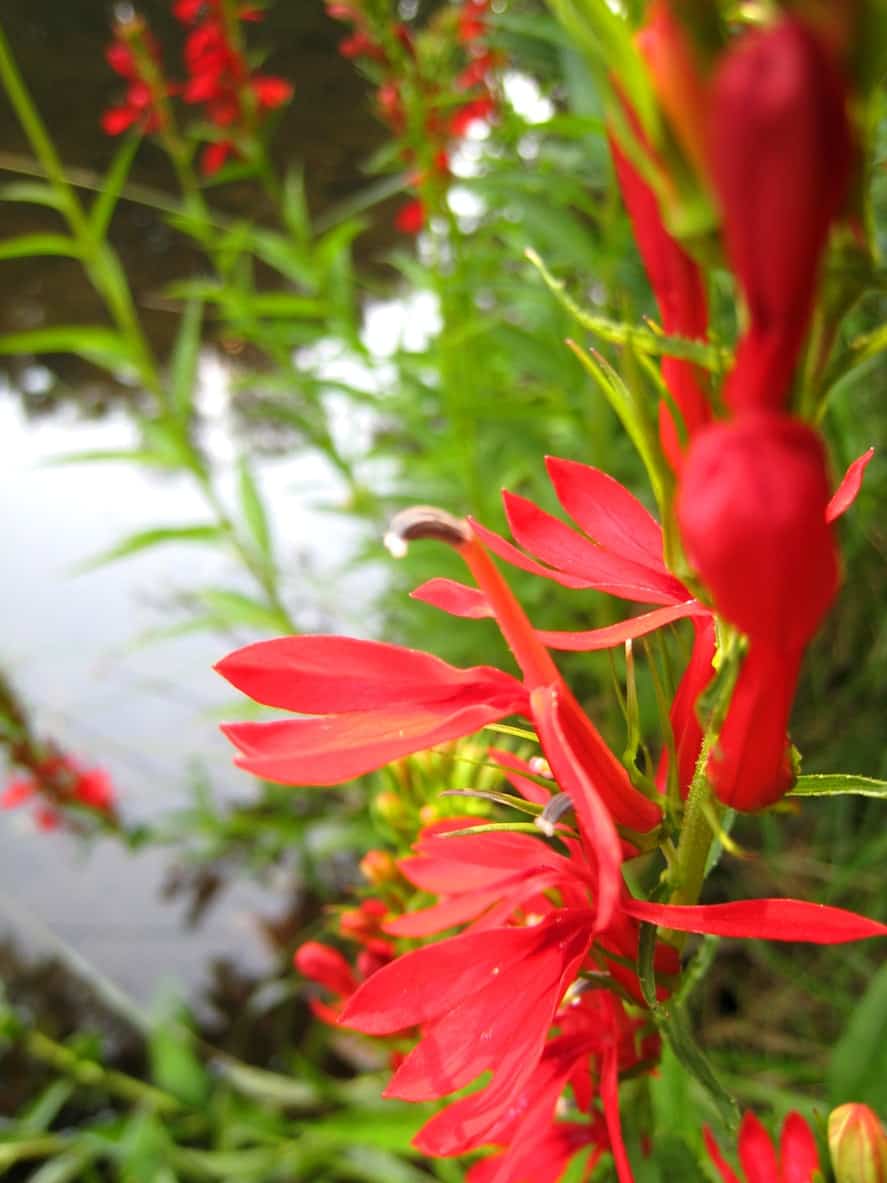 It has two-foot long flower spikes that hold bright red flowers, making them easier for the hummingbirds to spot. They are best grown from seeds and planted in groupings. 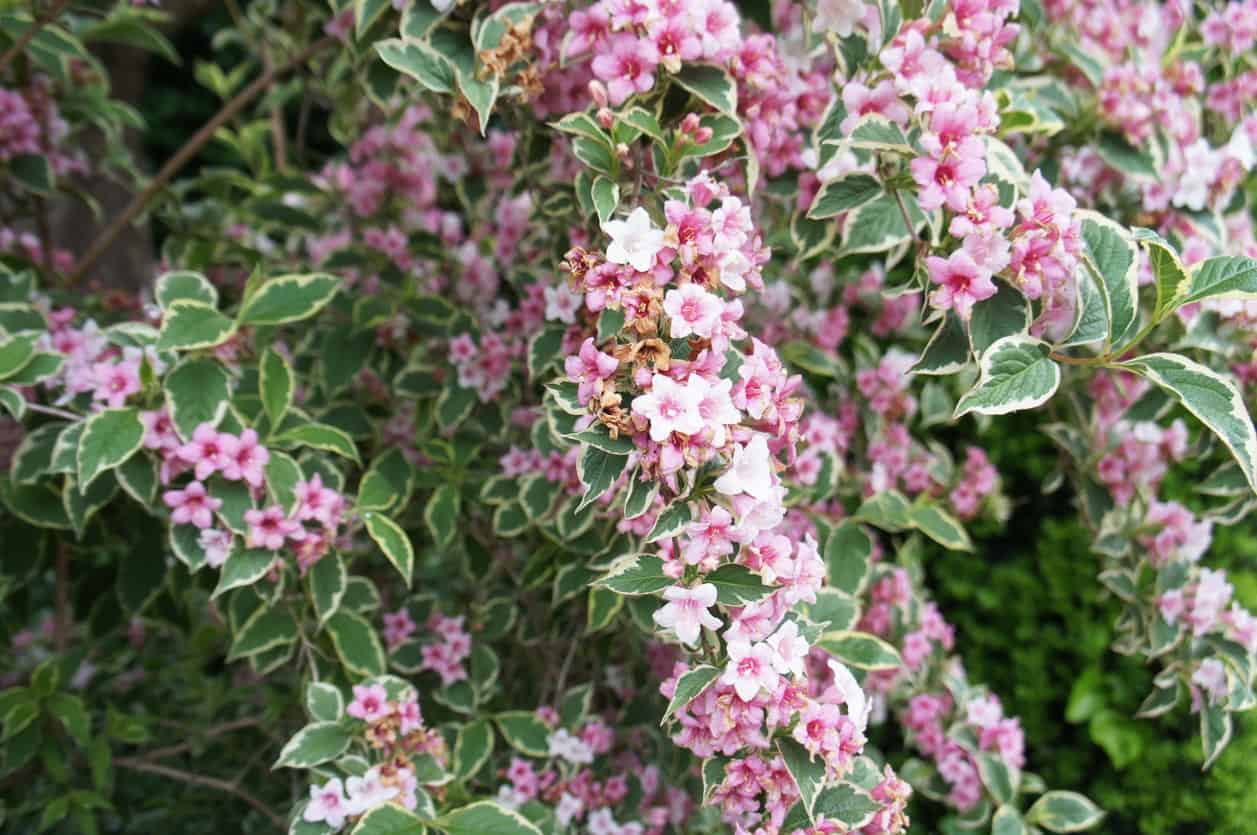 This flowering plant bears flowers in spring and sometimes, again in summer. Their funnel-shaped flowers are similar to those of foxgloves.’ They start out as pink and purple shades before they turn red and magenta. Weigela florida’s flowers attract both bees and hummingbirds. Plant these flowers, some of which may have colorful leaves, in sunny areas. 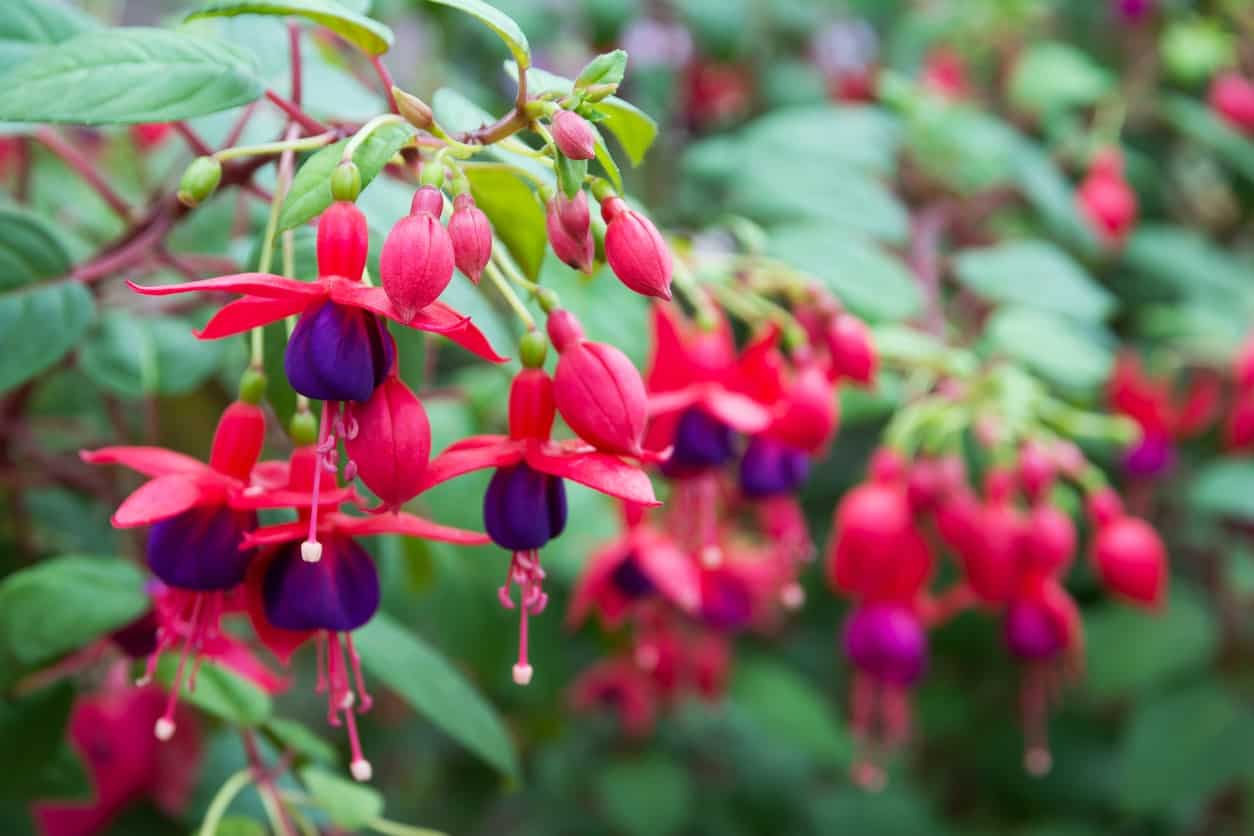 Hummingbirds love the fuchsia flowers’ jewel colors. They bloom in spring until frost kills them. They bloom extremely well if they at least half a day’s worth of sunlight. Fuchsia flowers survive longer with regular watering and application of fertilizers. 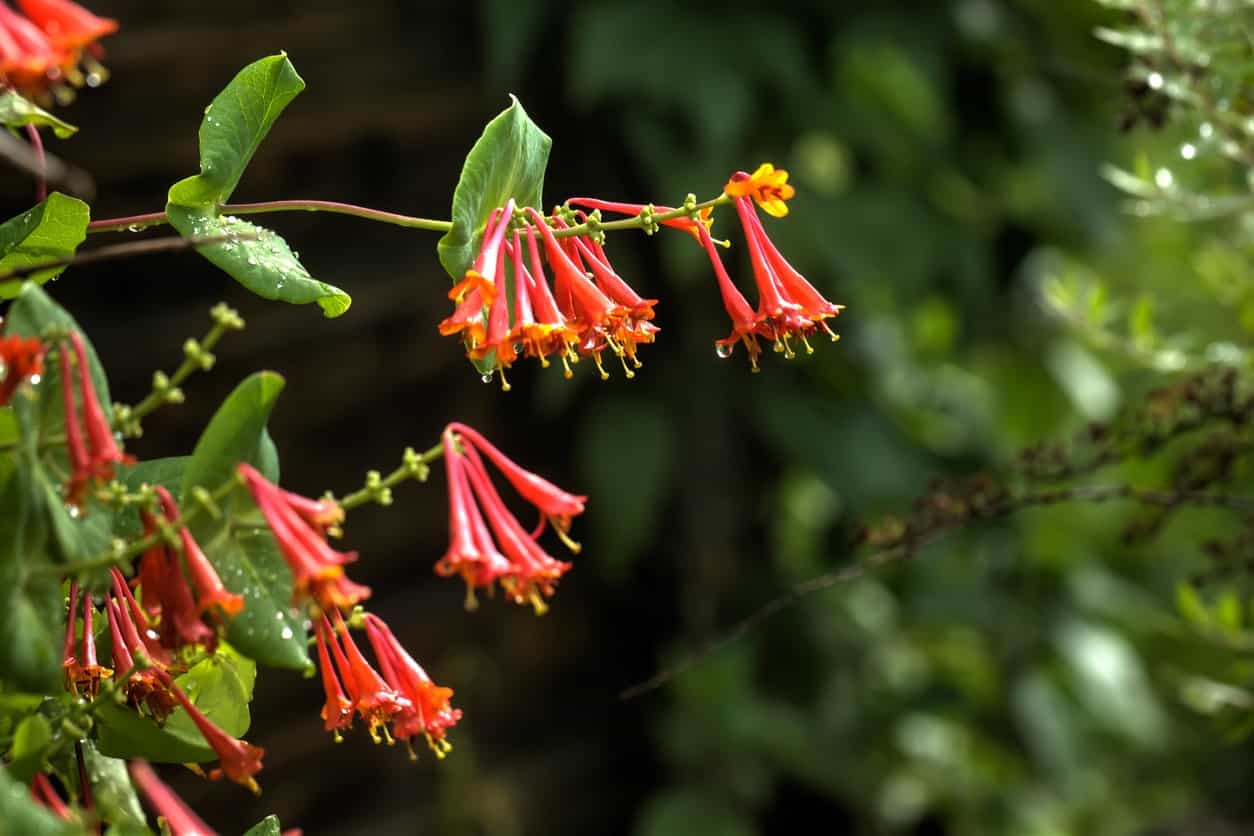 Its peach red flowers are understandably a great draw for hummingbirds. You can plant coral honeysuckles from root cuttings or seeds. Just make sure to provide trellises for them to climb up on. They would show off their blooms from late spring until summer. The best thing about coral honeysuckles is that they are drought tolerant. 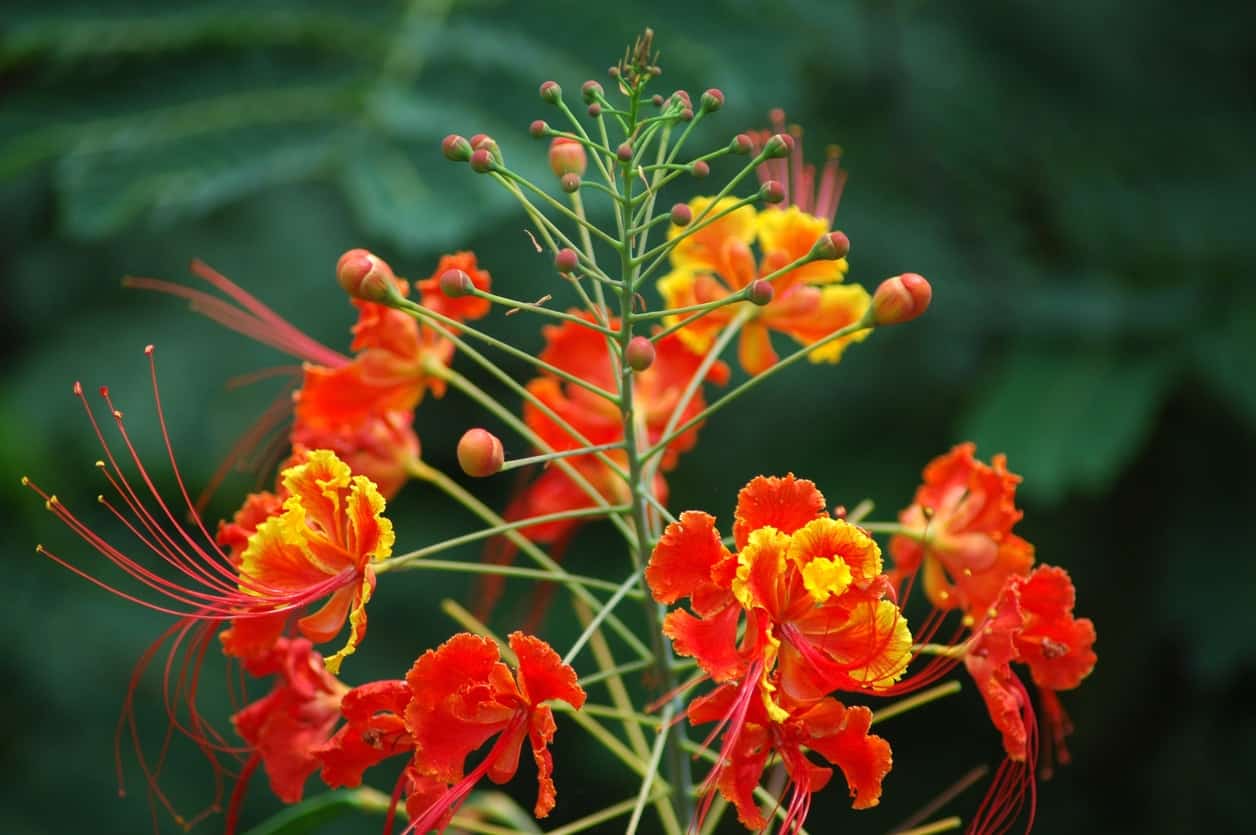 Hummingbirds favor the orange-red variety peacock flowers that often bloom through summer and fall. The shrub requires regular pruning after the flowers bloom to make way for new branches and new blooms. It may wither in frosty areas, but gets restored during warm weather. 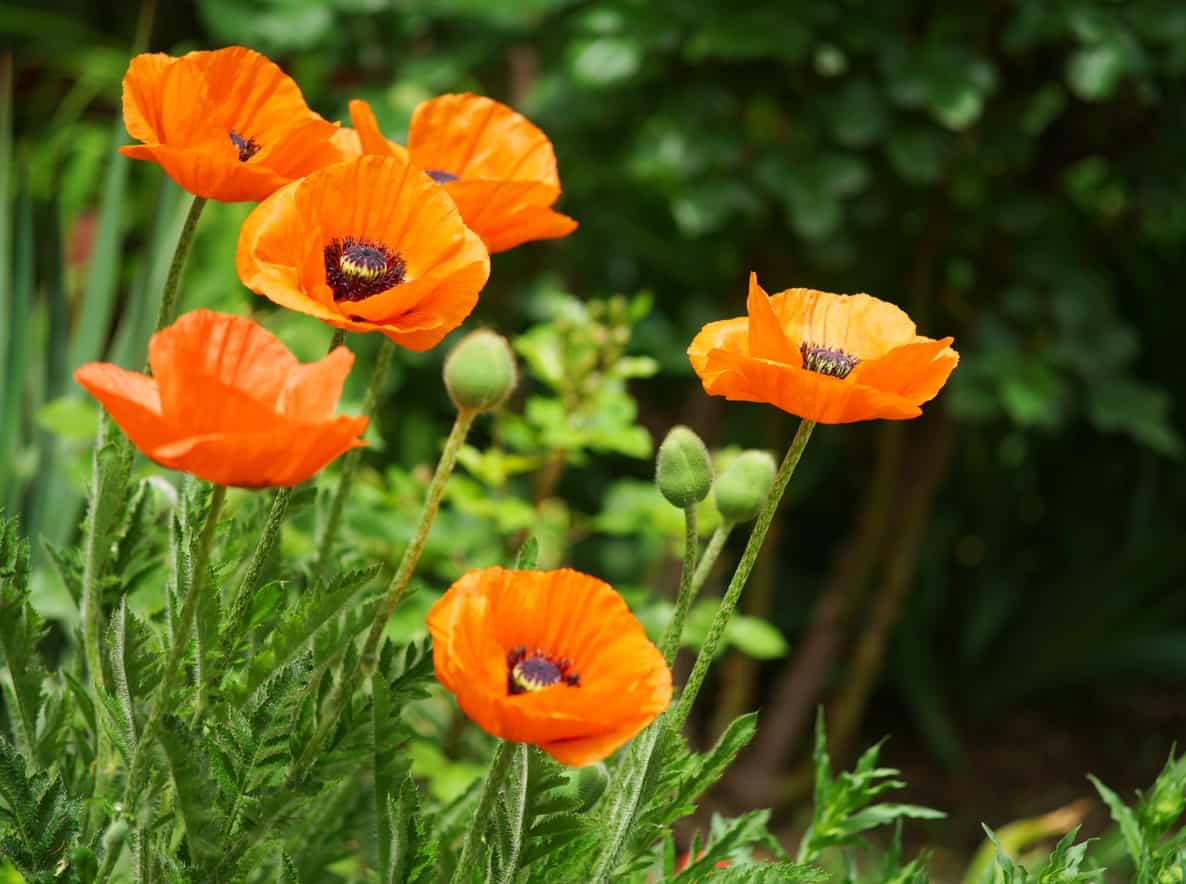 These perennial plants boast of huge, bright flowers that bloom in the middle of spring to late summer. The Fireball variety in orange-red and deep red varieties are the best draws for hummingbirds, but you may also want to plant the ones with pink, purple, and peach flowers. Oriental poppies are grown from seeds planted in a sunny area in the garden. 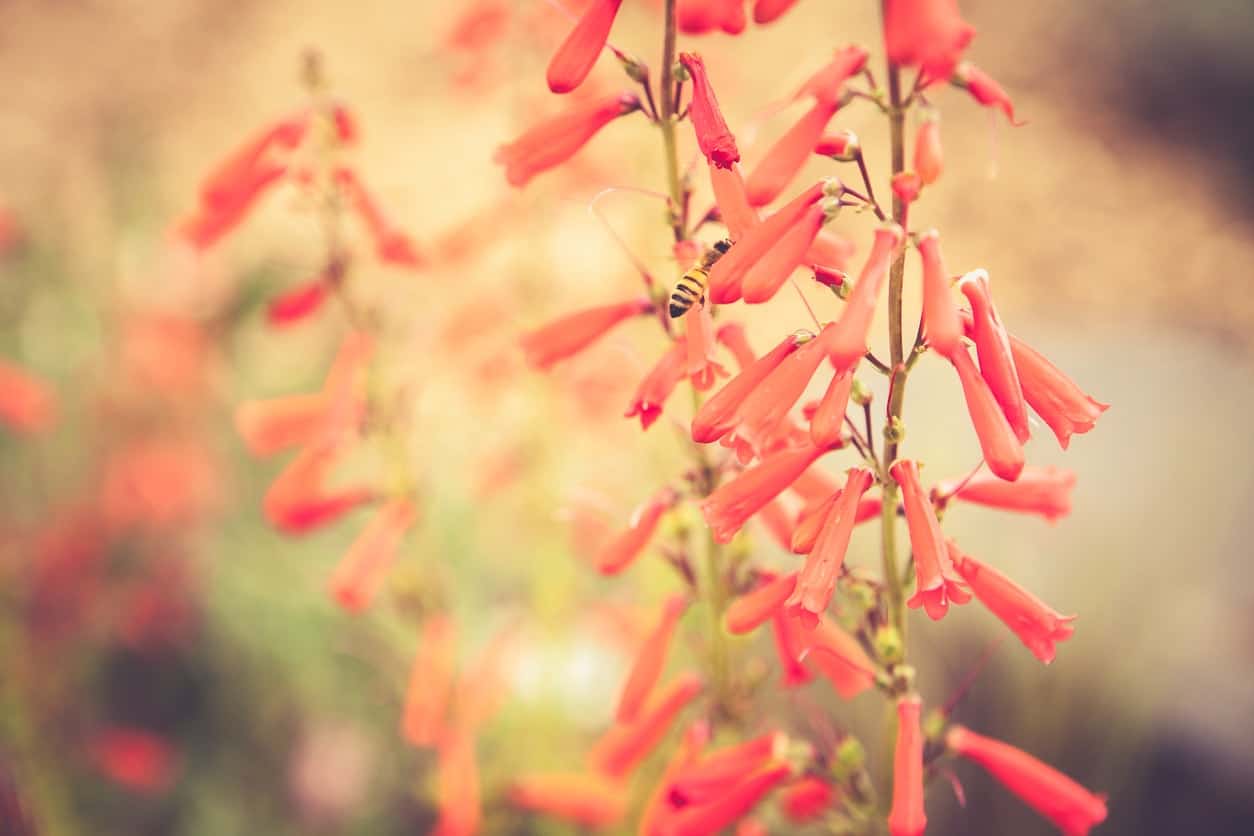 The red firecracker and pink-purple penstemons can bring the hummingbirds to your garden throughout the growing season, the barbed penstemon blooms from the late spring to early fall, while the cardinal penstemon produces flowers and nectars in summer. Penstemons can be left on their own and get revived every year. 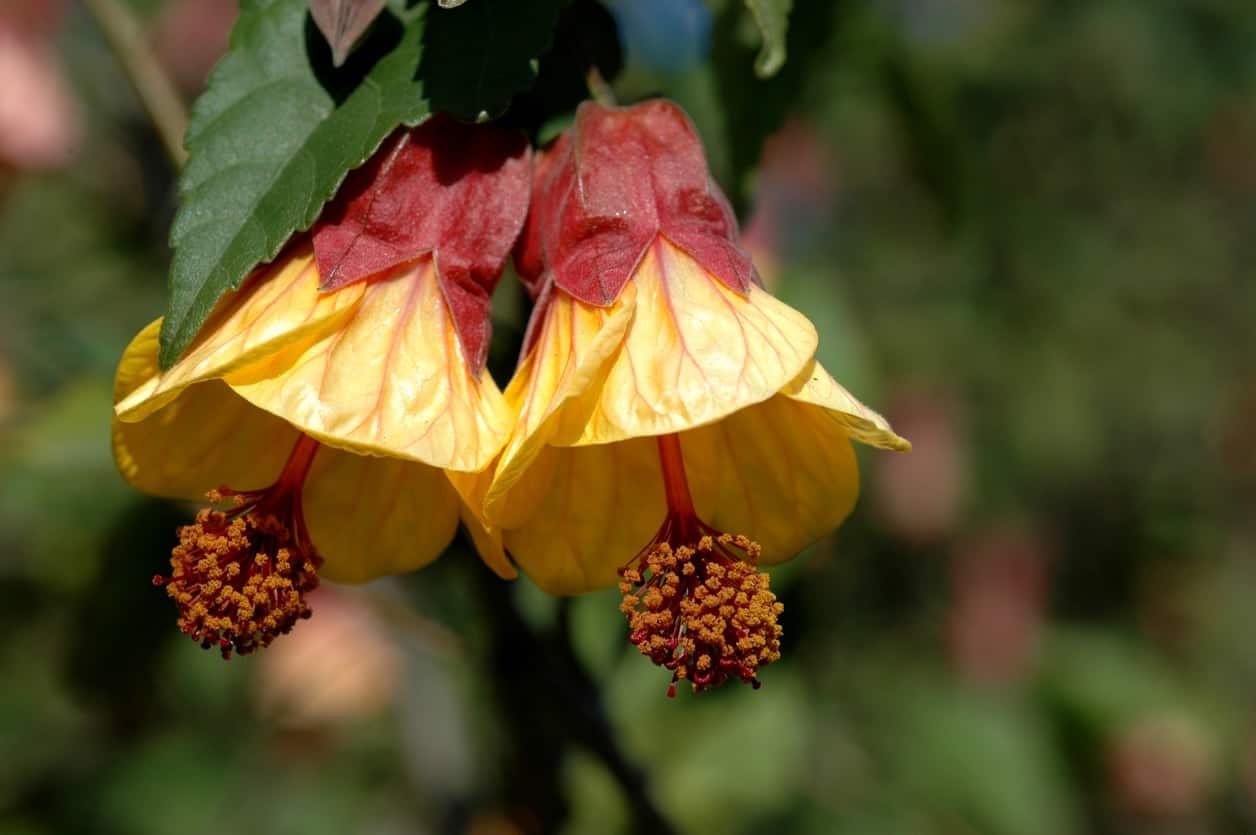 Also called as flowering maple, this plant has bell-shaped flowers that bloom in different colors. They are best described as smaller versions of semi-opened hibiscus flowers. They are considered as perennials in spots categorized as USDA Zone 9-11, but they are planted as annuals outside the said zone.

Abutilons are grown from seeds. When these shrubs produce peach, red, yellow, and orange flowers, they are clear magnets to hummingbirds. They can be grown indoors. 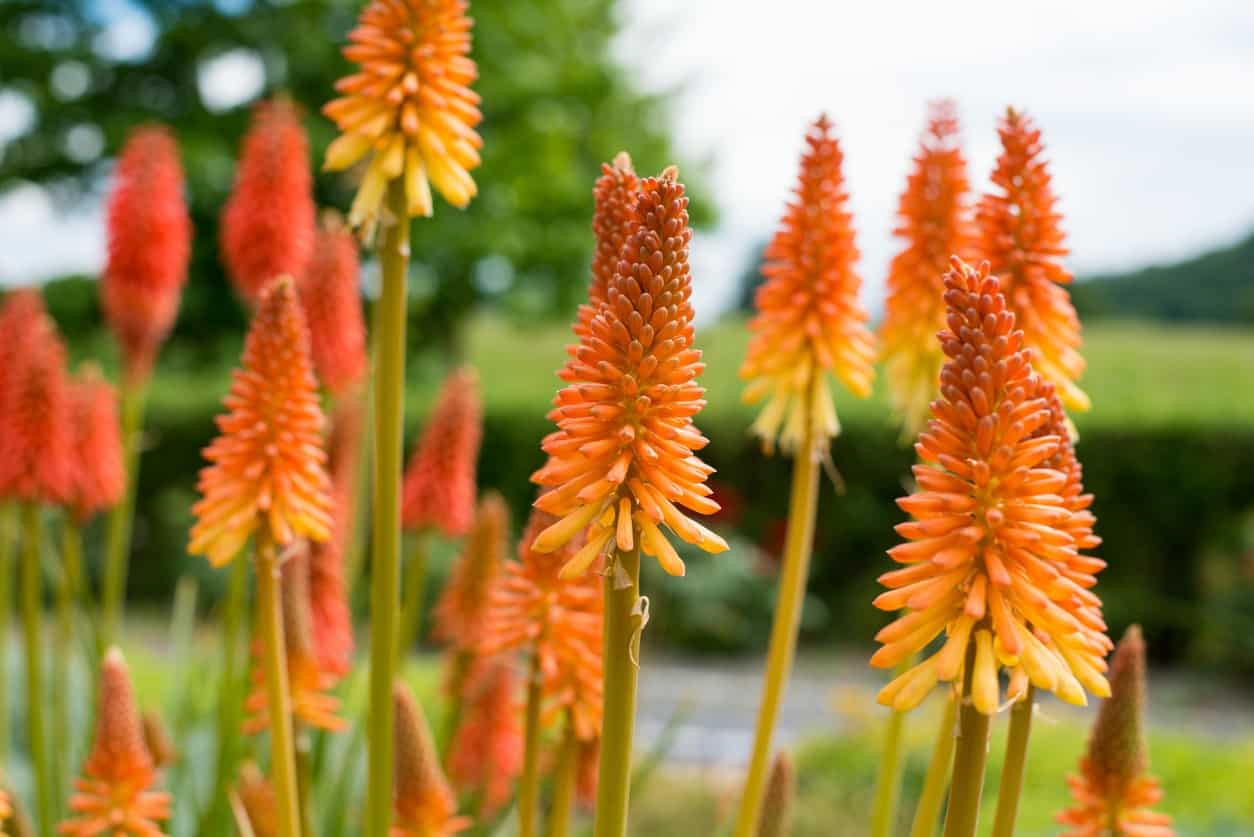 Their orange and fiery red flower clusters held up by long, sturdy stalks earned them their name, but their more than ample supply of nectars keep the hummingbirds coming. They can be grown from seeds or clumps. Since different types of red hot poker plant can grow flowers at various times of the year, make sure to plant different cultivars of this flower in sunny, properly drained areas in the garden. 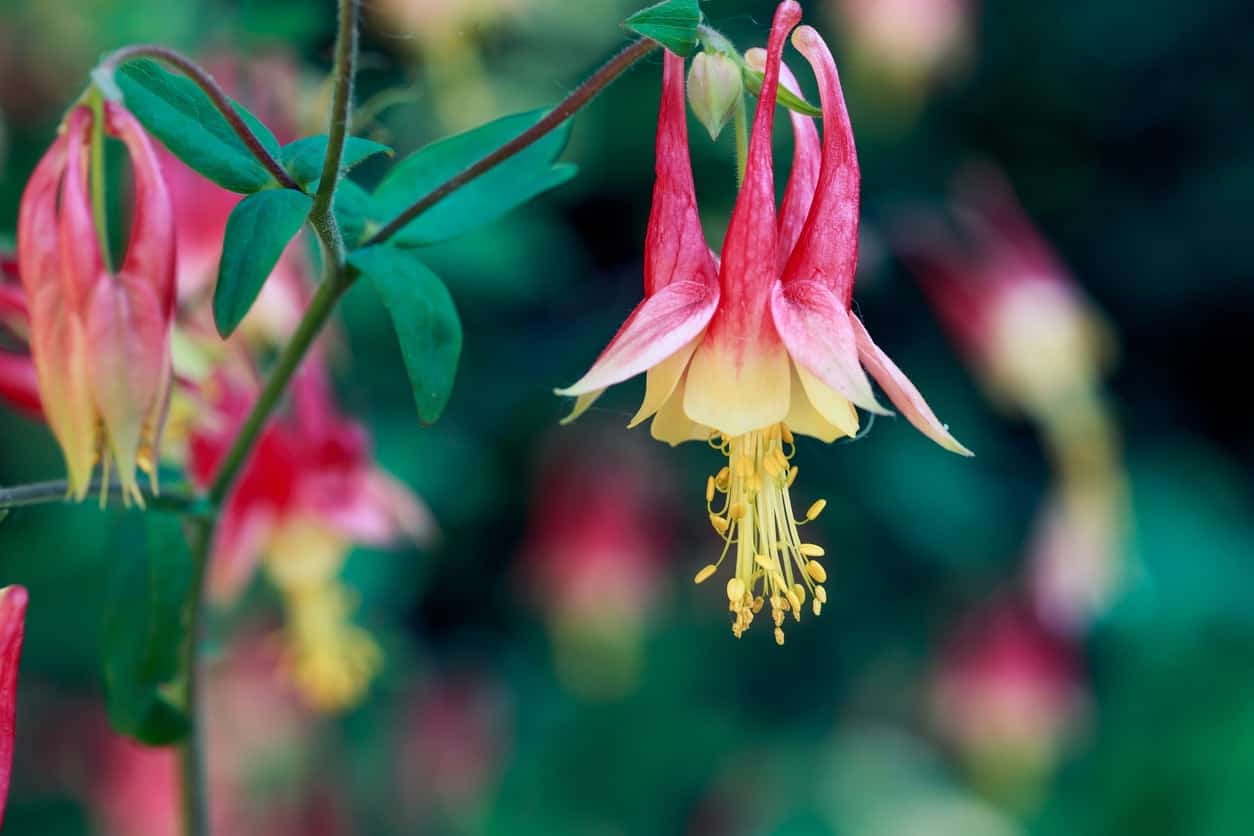 Hummingbirds are especially attracted to the wild columbines’ bicolor flowers and rich nectar supply, not to mention their straight and short nectar spurs. Their seeds need to be planted for them to self-seed. 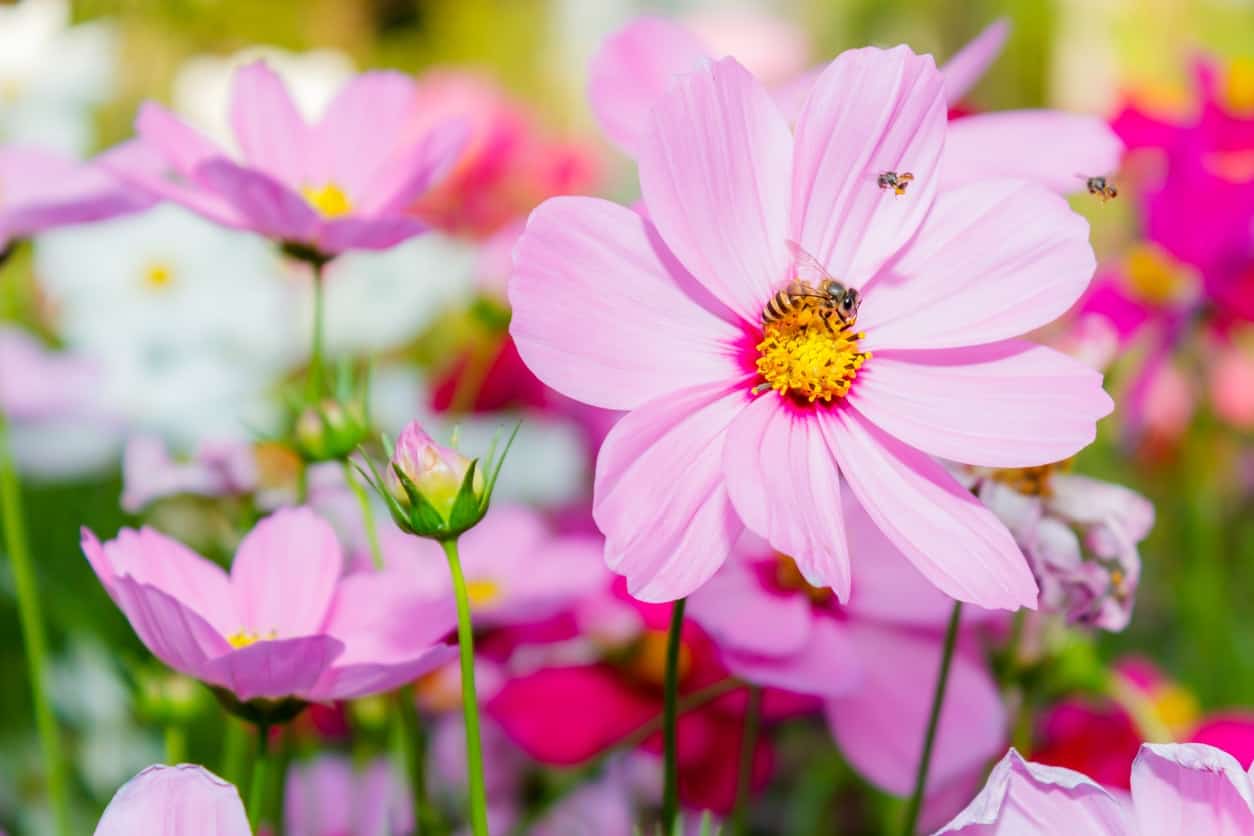 Cosmos flowers are annuals that grow in yellow, pink and orange, but the hummingbirds are most attracted to the “ladybird scarlet” variety. They are planted from seeds and bloom for a long time. They produce more flowers with the regularly deadheading. 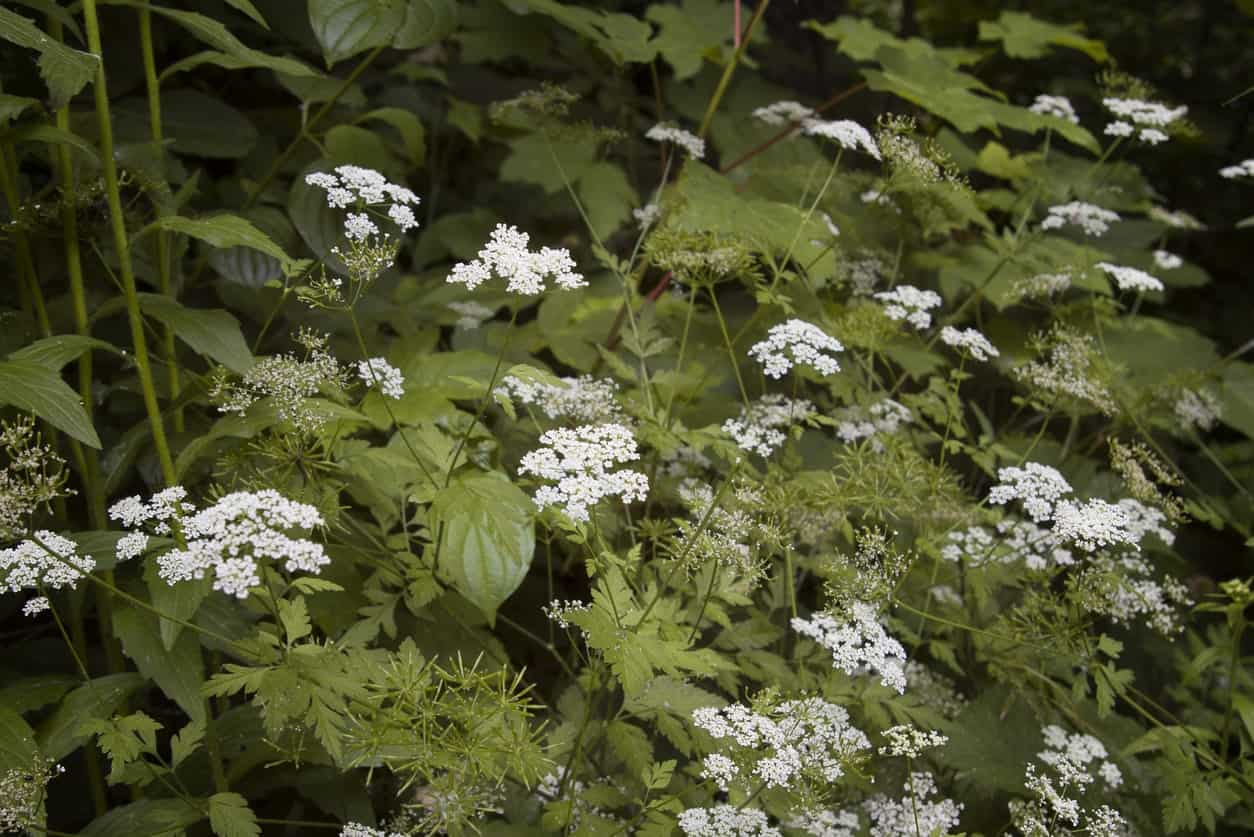 These are often found in white and yellow, with the less common bright red and shades of pink. The huge flower heads house smaller ones that serve as magnets to hummingbirds. Yarrows can survive a drought, hence their comparison to weeds. Make sure to contain them in one area to avoid a weed-like appearance. 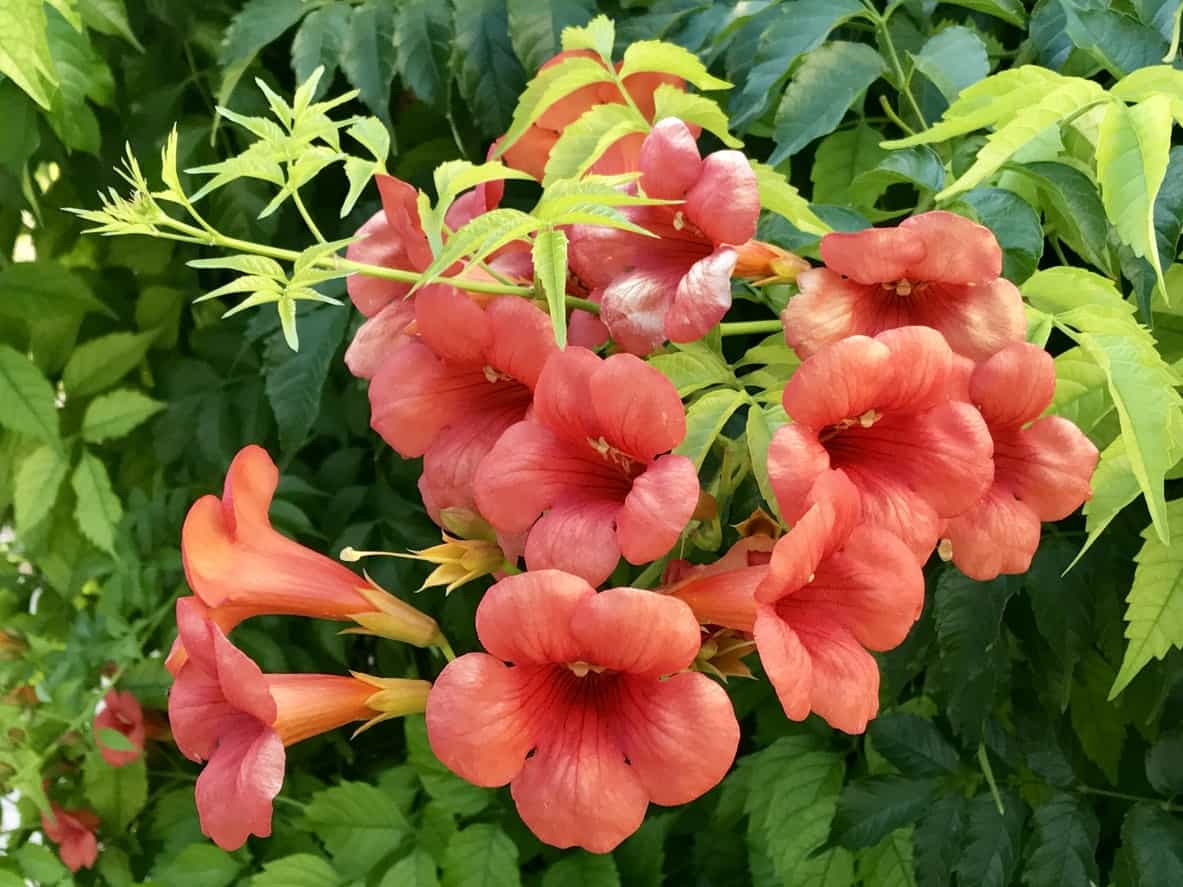 This perennial garden plant usually has yellow or peachy orange trumpet flowers that draw in hummingbirds and other honey lovers. The woody vine requires frequent pruning to avoid turning it into a nuisance in the garden. Make sure to cut the vine after it blooms in the summer and stop feeding it to discourage its growth. 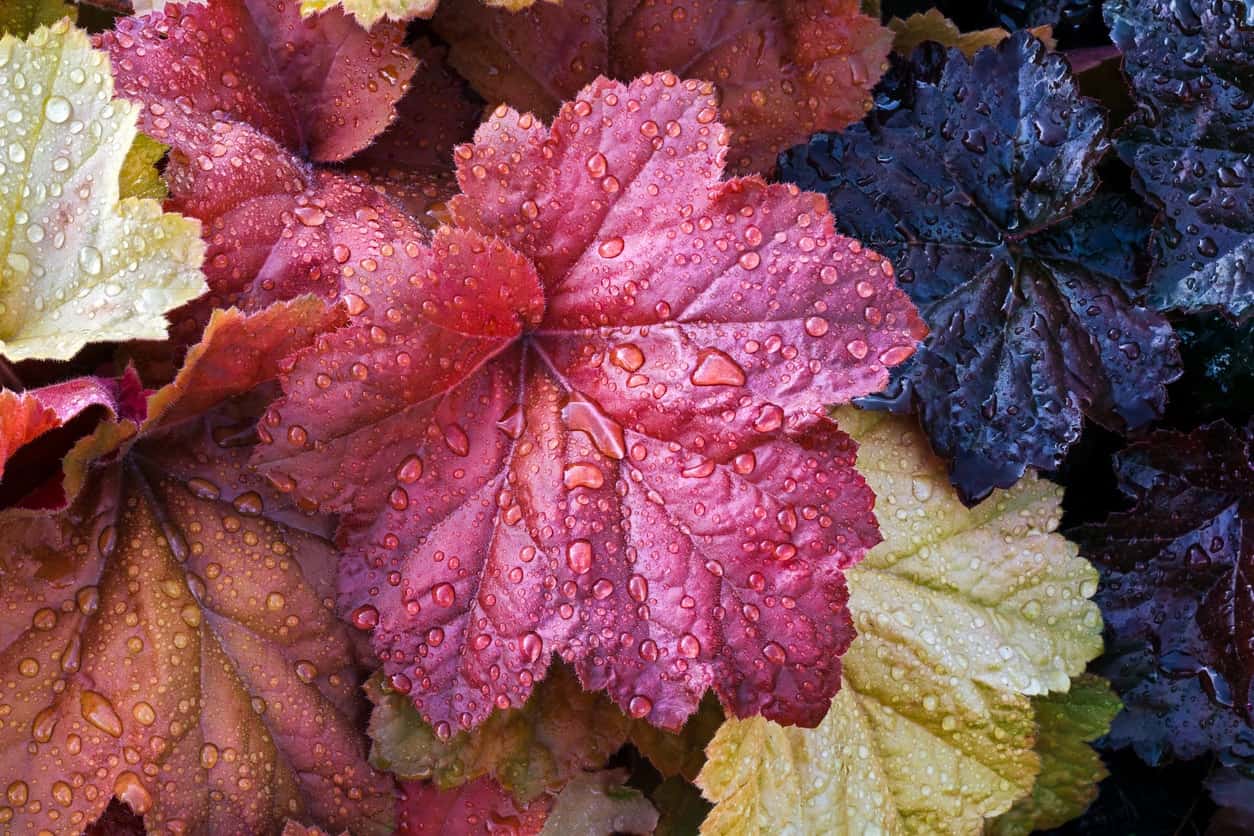 These garden plants greatly complement shade gardens with their colorful leaves and flowers that can often be found in red, pink, and peach. They also invite the hummingbirds to your garden. 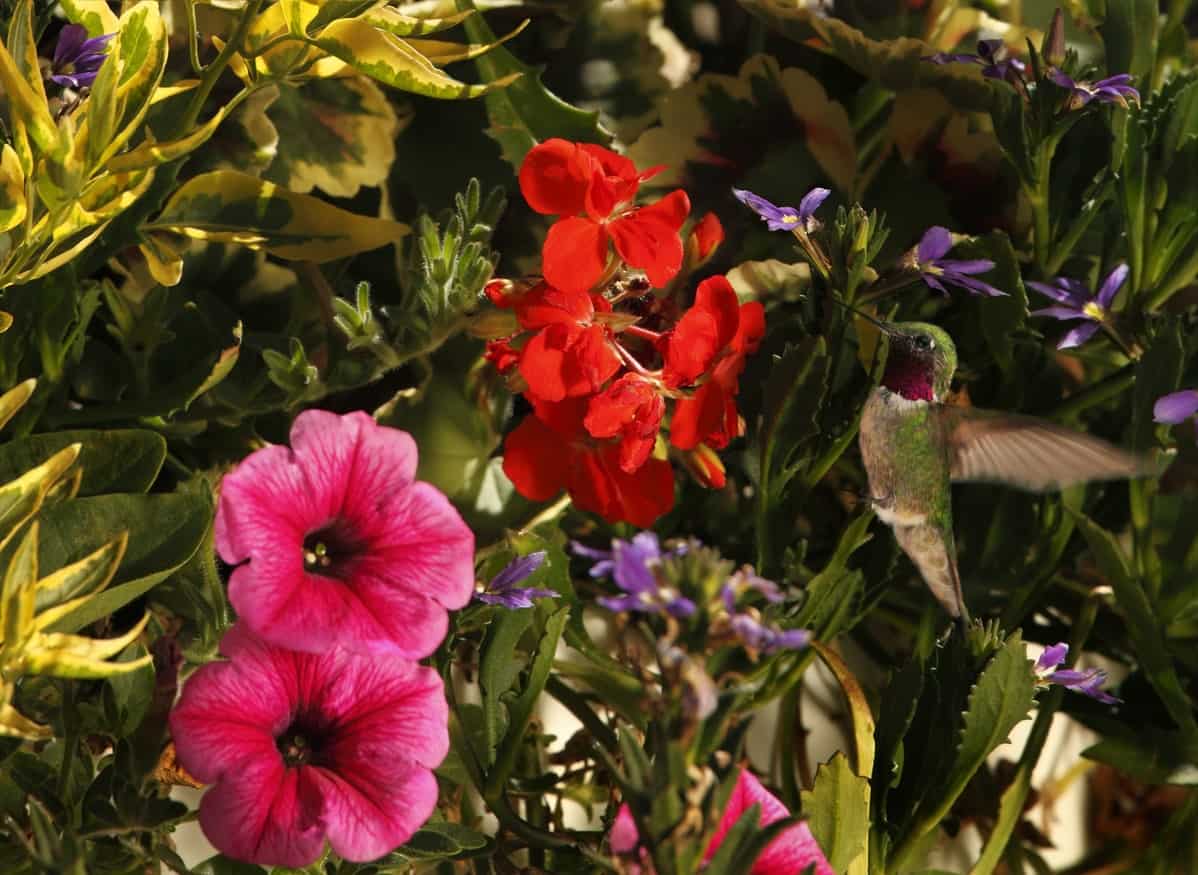 These flowers grow exclusively meant for hummingbirds. They can be found in bright scarlet, although they might be smaller than the hybrid petunias. The exserta type generates more nectar. 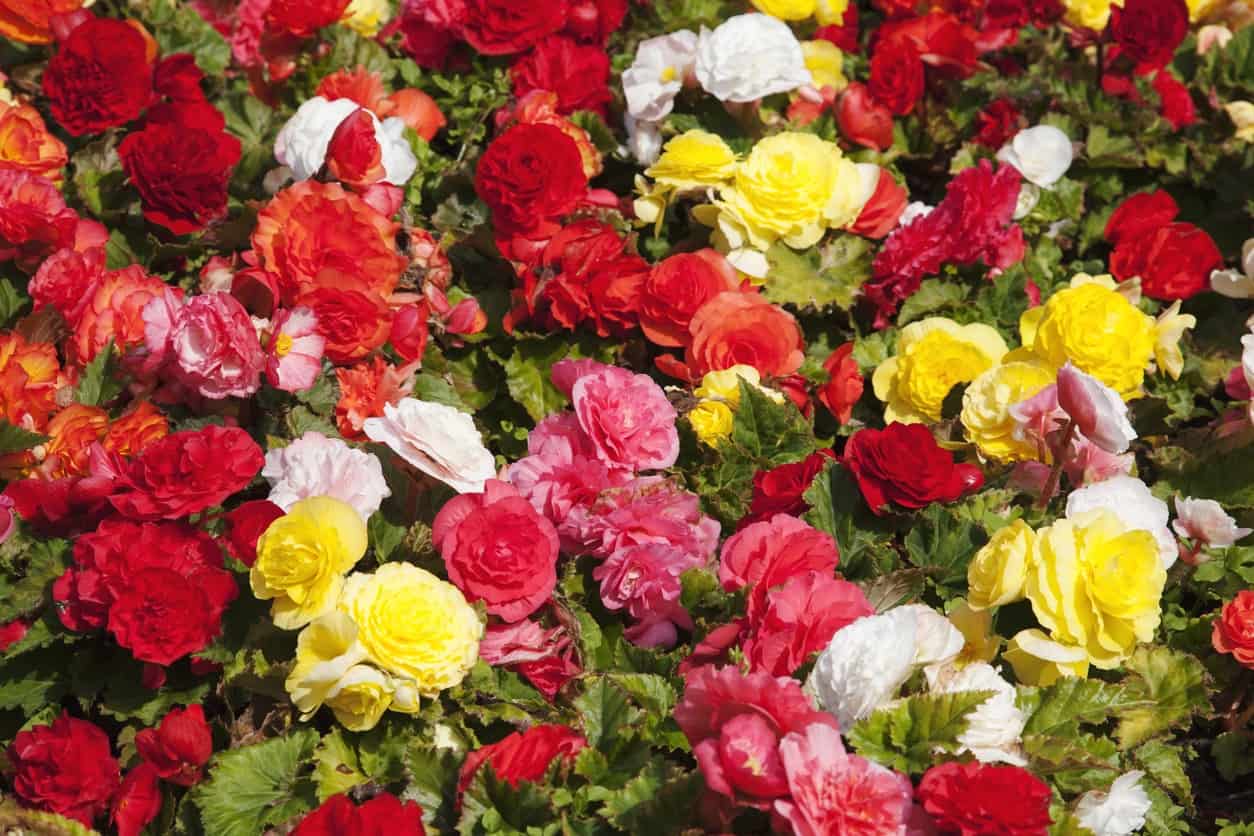 Brightly colored begonia flowers can attract hummingbirds, especially those planted in hanging baskets. They take around three months to produce their first blooms and have to be grown indoors, away from the frost. They should be placed where they can get sunlight, but not full sunlight because they can wither and die.

It also helps if you constantly provide lots of water in your garden for the hummingbirds. Experiment with different flowers in this list to find the best combination that can keep the birds visiting throughout the year.

Inspiration for this post: Natural Living Ideas (with permission)