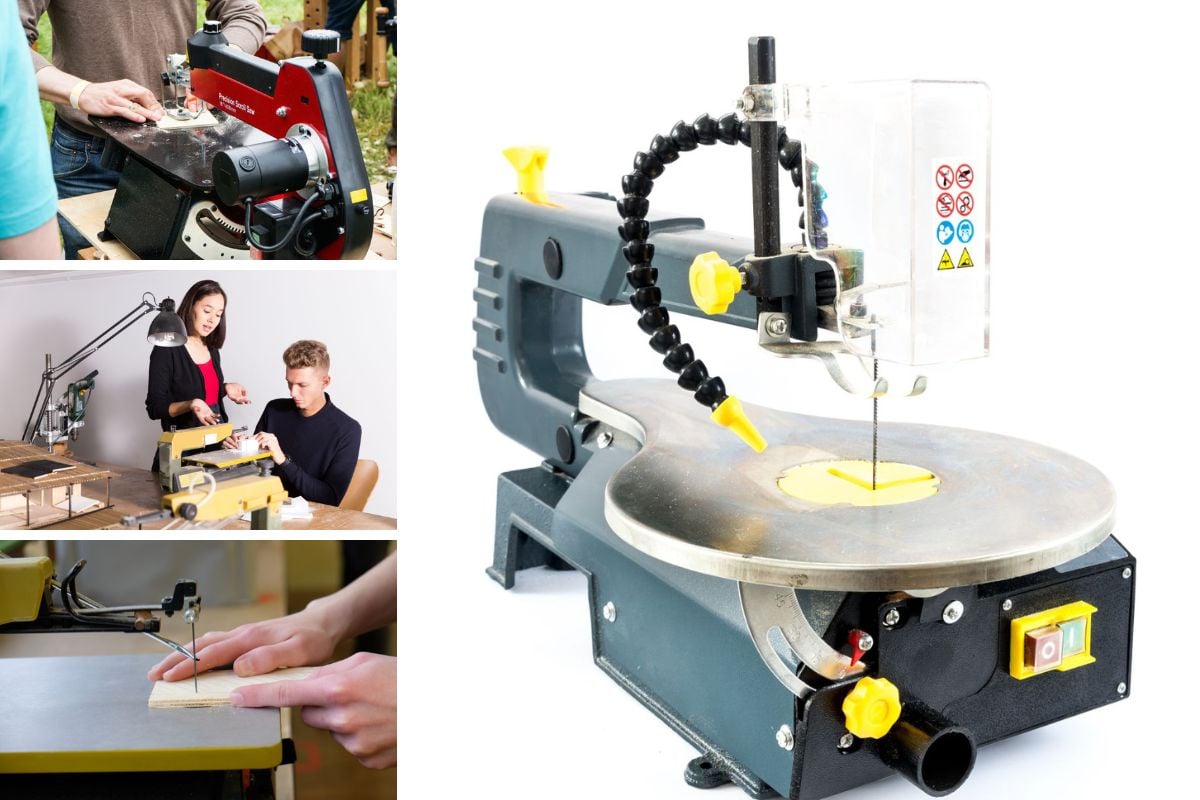 DEWALT’s scroll saw is an excellent tool, especially for those refined cuts we often struggle with. The easy-to-use design and durability make the DEWALT scroll saw a pleasure to work with, whether you are a casual handyman or a professional. DEWALT’s scroll saw is manufactured at a high standard and is known to last many years.

The DEWALT scroll saw has a narrow blade that cuts delicate curves and corners. Minor problems have surfaced; here they are and the ways to resolve them: 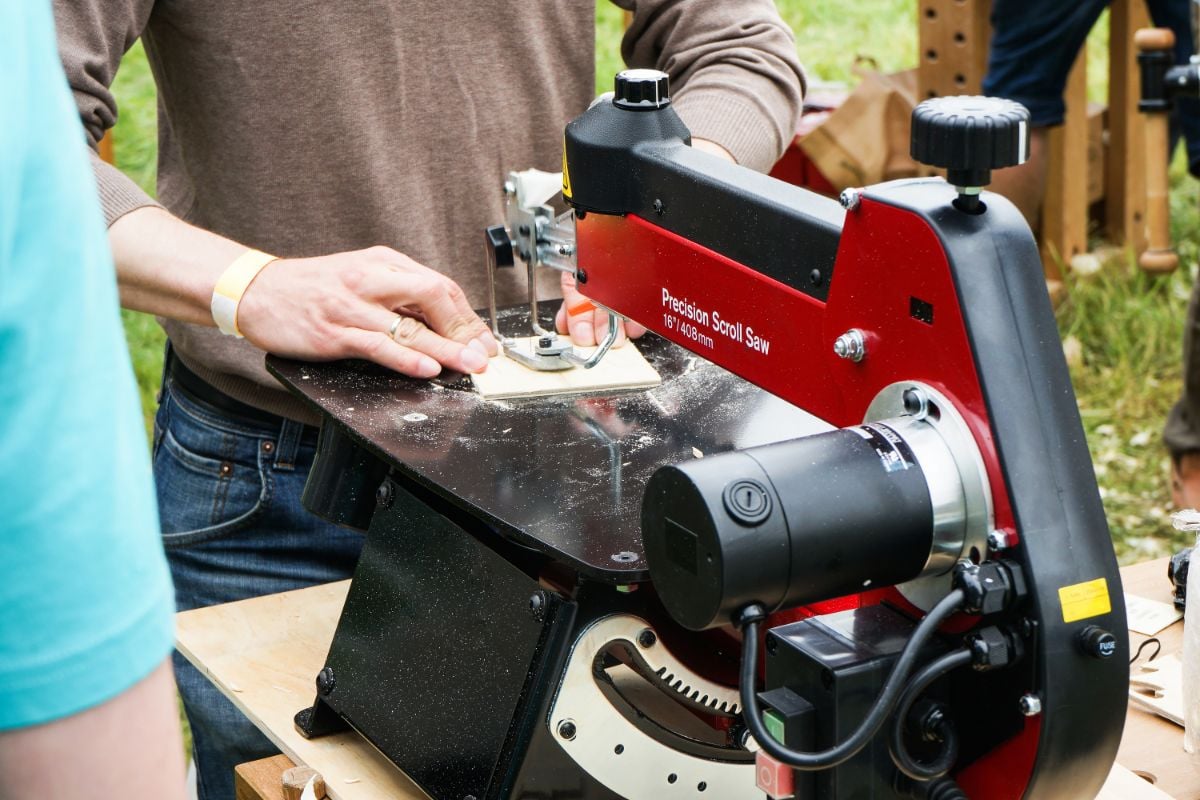 Blade clamps can slightly bend the blade after many holes in the fretwork. Feeding the blade through the holes is difficult if it is bent. Because the Allen screw and thumb screw could have burs and they hold the blade, these burrs can cause a bent blade. Follow these steps to fix a bent blade:

Take both screws out of the blade clamp assemblies, top and bottom, and file them smoothly. After filing the blade clamp screws smoothly, the blade will not bend anymore, especially when doing a lot of fretwork.

If the DEWALT scroll saw is regularly used, the blade clamps tend to build up with dust and dirt and lose their cutting accuracy. Take the thumbscrew clamp out of the scroll saw and ensure it is clean and pivots without obstructions. The pivot does not need oil to move freely, and the oil will attract dust and dirt, causing the bent blade problem all over again. 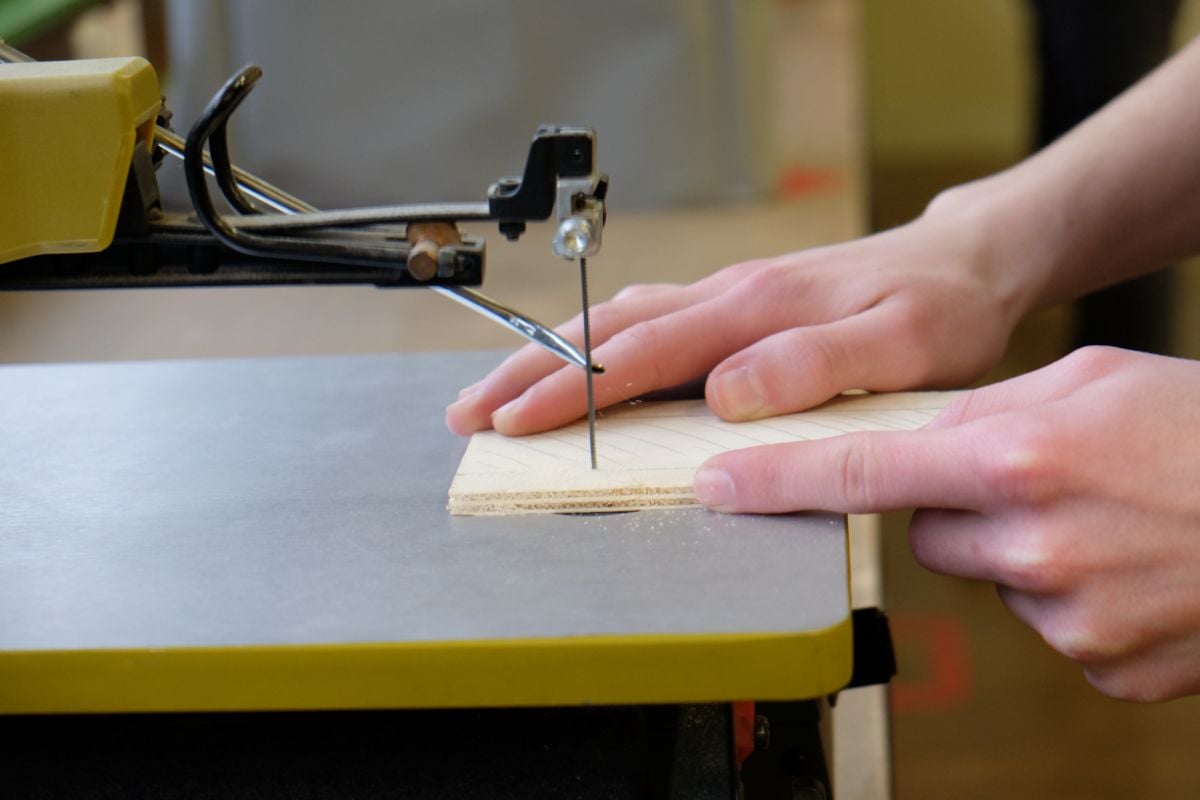 Cutting a tight “v ” pattern is problematic and difficult if your DEWALT scroll saw has an alignment problem. The blade alignment is the first to check on the DEWALT scroll saw. If the blade spacing is off from one side to the other, you can adjust the blade to make it run true. 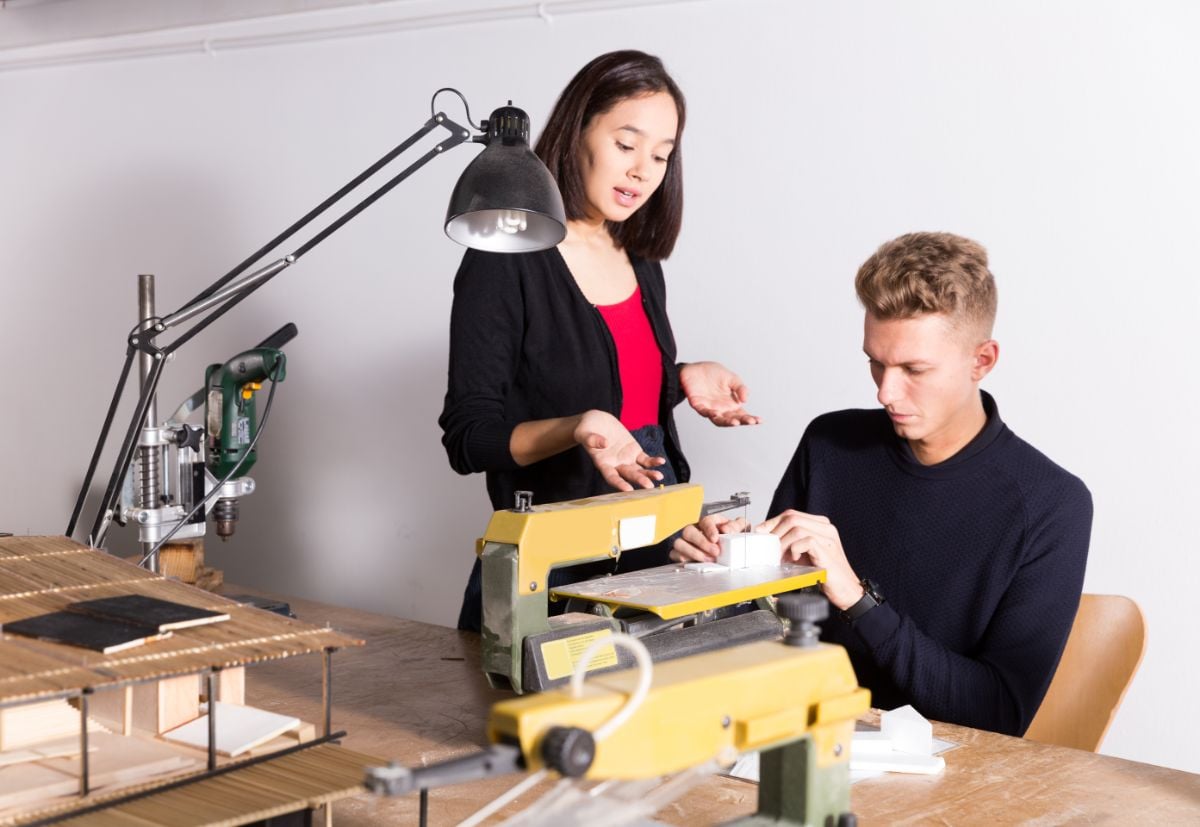 It is frustrating when you want to cut something, and your DEWALT scroll saw won’t start. A faulty switch could be the culprit; fortunately, an easy test and fix are available.

A faulty switch can cause the DEWALT scroll saw not to start. DEWALT’s scroll saw switch is inside a black cover held together with four Alan screws. Remove the four screws and lift the cover. The wires are a bit tight, and you will need to use a long nose plier to remove the two wires to gain access to the switch. Once you have access to the switch, you can continue to repair or replace it. 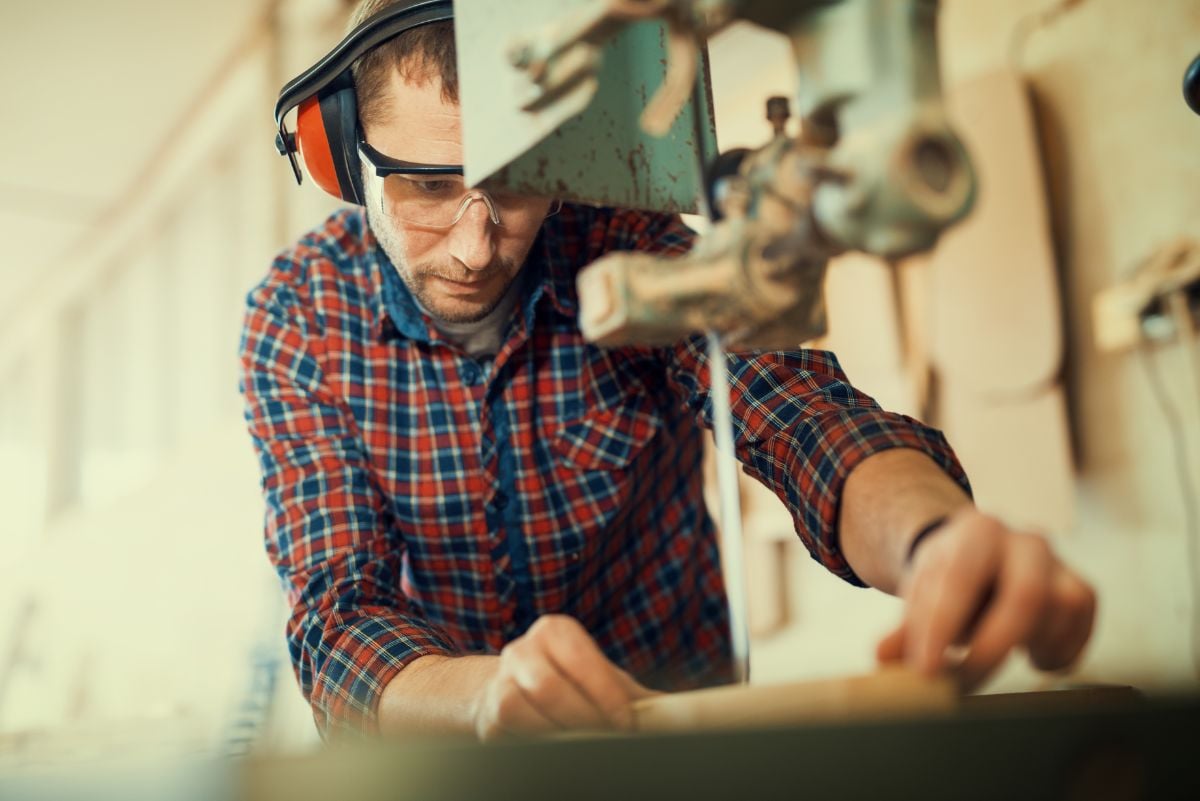 If you experience a knocking noise when you turn the speed above five, there is an easy fix, and it should only take a few minutes. The knocking noise problem comes from a tensioning rod that slaps against the upper arm housing.

Here is a link for a DEWALT scroll saw parts schematic to assist you with this fix. This schematic has a full breakdown of the scroll saw to show where every part is located:

The tensioning rod needs adjustments, but to do that, you first need to remove the head assembly from the arm so it can drop down to give you access.

A knocking noise is coming from the back of the DEWALT scroll saw, and to find it follow these steps:

The armature at the back of the DEWALT scroll saw is enclosed in a cast iron casing and has a nut that, with time, wiggles lose. The bolt cannot fall out because the casing holds it in place, but without the nut securing it, it flops up and down, creating a knocking noise.

The first thing to do is unplug the saw for safety. Once the DEWALT scroll saw is safe to work on, remove the tension from the blade and take the blade out of the way. Next, remove the table by loosening two Allen screws on the bottom front end of the table and the third screw with a nut at the back of the table. After removing the screws, the table should lift off, but it sometimes needs a bit of convincing.

Please keep track of all the hardware because it will all go back into place when reassembled, and you do not want to lose anything. At this point, you want to be careful because you have no rigidity to your saw and do not want to damage any internal components.

There are six screws and nuts holding the back housing in place and a bolt securing it to the stand. Remove these six nuts before the housing can come apart. After removing the stand bolt, six screws, and nuts, you can separate the housing.

The loose part and the cause of the knocking noise is the bolt of the conrod assembly. You can easily identify the bolt because it is so loose that you can spin it. A nut that needs to be tightened is not visible on the other side of the bolt. You will need an 11/32 wrench to hold the nut to tighten the locknut.

If you cannot get access with a wrench to tighten the nut, you will need to remove the rest of the housing to get a socket or a standard-thickness wrench to hold the nut while tightening the screw. Once the nut is tightened, you can focus on reassembling all the components following the same steps in reverse. 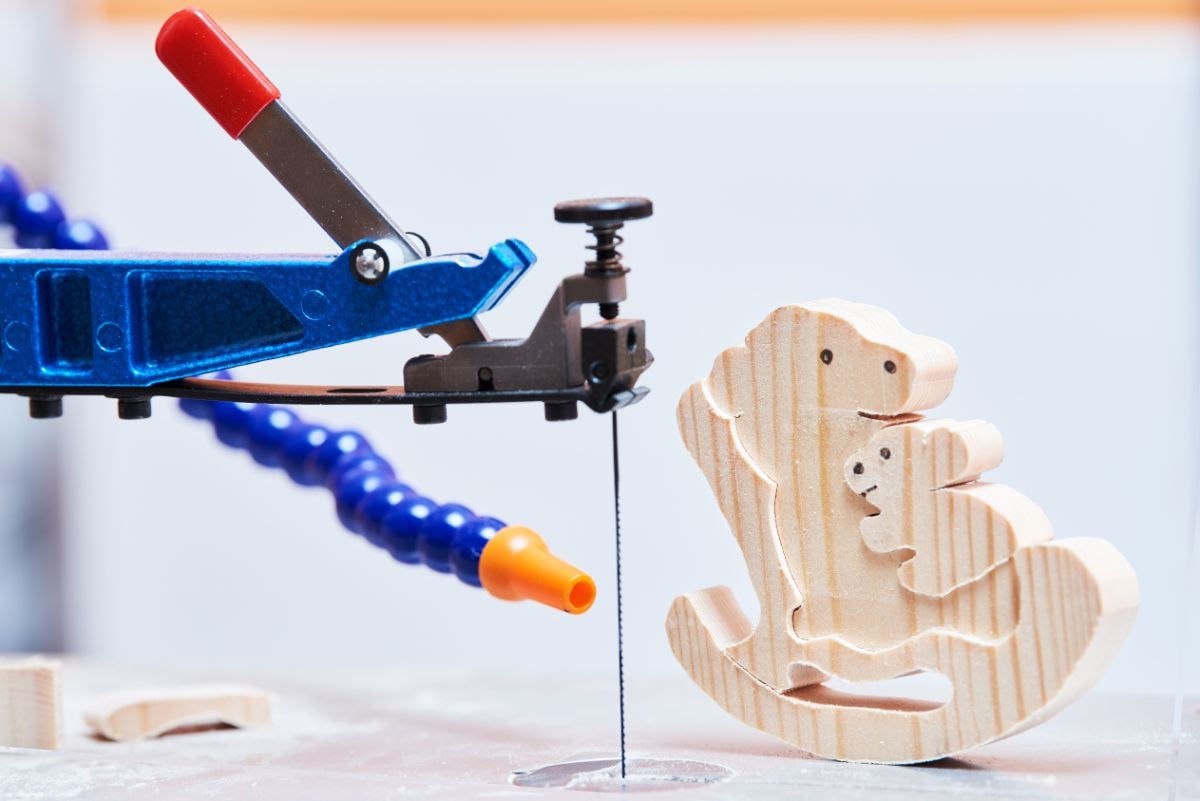 Low-quality grease is one possible reason the DEWALT scroll saw has excessive noise. Dry bearings are a common failure, and DEWALT has not addressed this issue leaving users to think that it is because they want to keep manufacturing costs down. Quality lubricant for bearings is important; luckily, you can easily grease the bearings yourself to extend the lifetime of your scroll saw.

The main problem is that all the moving parts with bearings are located inside the closed casing of the DEWALT scroll saw. The closed casing traps the sound inside and hides the cause of the noise. The downside is ignoring the noise will only cause it to get worse. To grease the bearings are easy, and these steps will help:

You must release the table first held by the trunnion knob washer. Unscrew the knob and pull the table forward approximately three inches until the trunnion is free from the bolt; set it aside carefully.

After lubricating, the blade clamps take a Torx 25-bit and remove the bottom blade guard. Continue by holding the 10mm nuts of the lower arm cover situated on the left with a ratchet and socket while loosening the four screws of the bottom arm cover using a Torx 27 bit.

Remove the five screws of the left housing with a Torx 27-bit. On the top, there are two screws situated close to one another that do not have to be removed. After loosening these screws, separate the case using a plastic prying tool or flat screwdriver. When you remove the housing, you must secure the upper arm so it does not fall.

The pivot rod has a wavy washer in the center of the rocker assembly that can easily fall and get lost. This pivot rod washer is essential to reduce noise and stress, and losing it will cause you a lot of frustration, so do not lose it!

At this point, you can inspect the inside for any dirt, dust, and problems. One of the things to look out for is metal filings. If you find metal filings, the scroll saw bearings are probably damaged and must be replaced.

The main rocker assembly is on the front of the DEWALT scroll saw and must be removed next. Loosen the two nuts holding the rocker assembly, then position the counterweight and secure it to loosen the shaft screw.

The shaft screw is loosened clockwise and not counterclockwise; you mustn’t try to loosen it counterclockwise like other nuts. Loosening it in the wrong direction will overtighten it and strip the thread. Stripping the thread will result in a motor replacement. 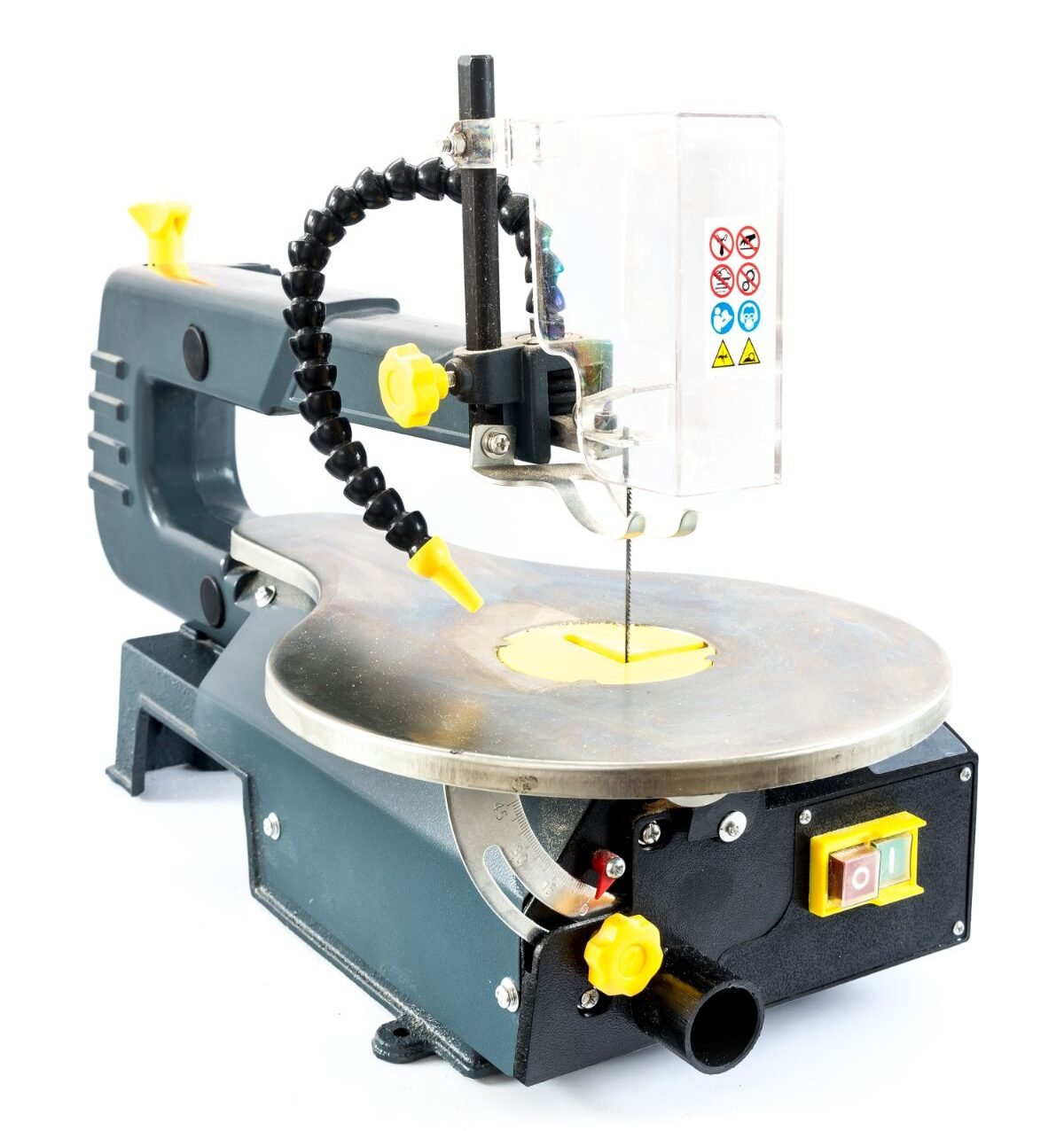 Inspect the bearings for dents, scratches, and damage. If any bearings show signs of damage, the best course is to replace them rather than grease them. Use a cloth or pipe cleaner to clean the bearings thoroughly. Once the bearings are clean, regrease the bearings but be sure to use generous amounts and get the grease throughout the bearing rollers.

After regreasing the bearings, reinstall all the components following the same procedure as when you removed them. Ensure everything is in its original place and secured with bolts, screws, and washers. Once it’s back together, your DEWALT scroll saw will be good as new.