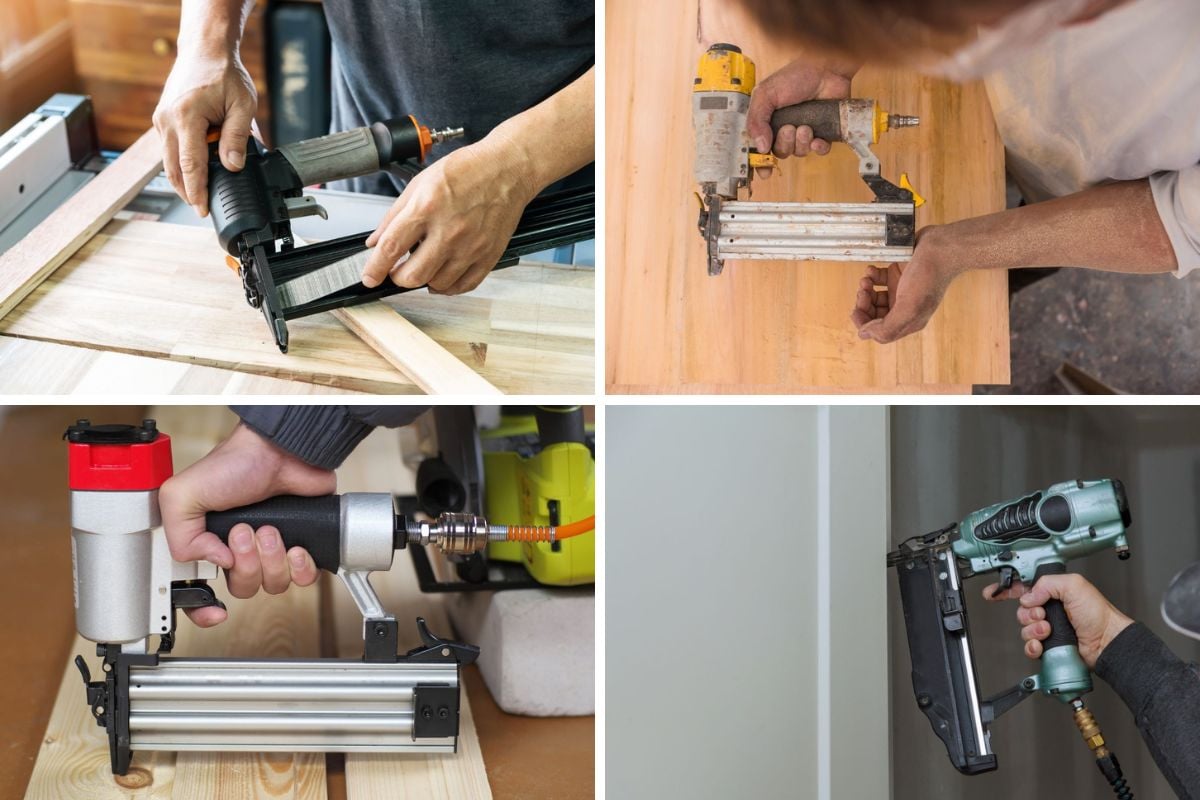 People may never outright admit it, but those who have used nail guns will agree that they are better than sliced bread. As one of the most influential tool names, the DEWALT cordless framing nailer is one of the greatest ever. They don’t often fail. But what can you do when they do? Thankfully, there are simple causes (and solutions) for DEWALT cordless framing nailer problems.

The problems people most often encounter with the DEWALT cordless framing nailer:

1. A Nail Gets Jammed 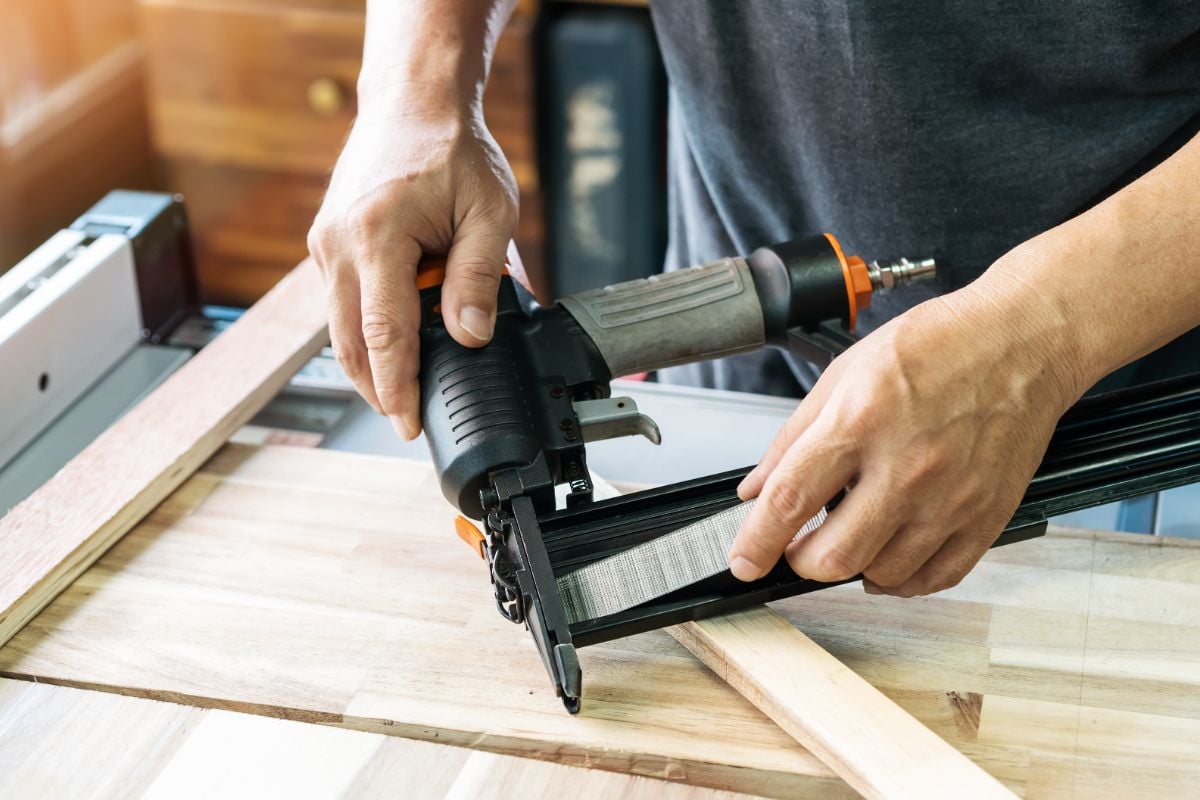 It’s frustrating when a nail gets jammed in the framing nailer’s nosepiece or workpiece contact. This is usually not because of a problem with the nail gun, but it’s caused by low-quality nails instead. It could also happen if a nail is slightly bent, dirty, or rusty.

The solution is as simple as its cause: remove the jammed nail, inspect it to find why it got jammed, and replace the remaining nails with better ones if necessary.

Remember to check and see why the nail got jammed. It may just be one nail that’s a bit bent, but it might be a good idea to replace the entire cartridge to be safe.

2. Not Enough Force From The Firing Pin 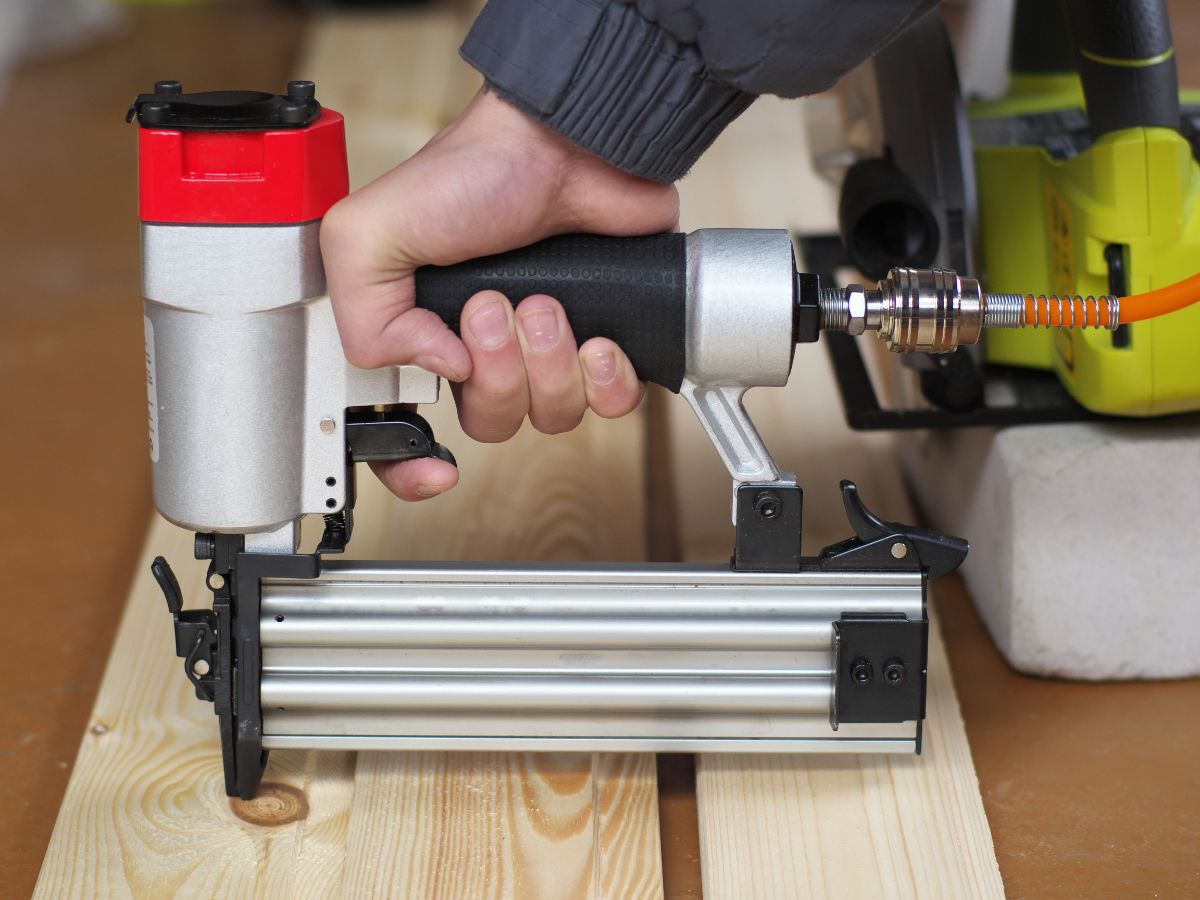 Sometimes you may notice that the nails don’t go into the wood with enough force. They might only go in halfway. The most common cause is closely related to the nail jamming problem. Sometimes, when nails get jammed often, people will lubricate the nosepiece to try and stop that from happening, even though there’s a “don’t lubricate” sticker telling them not to.

Solution 1: Clean Away the Lubricant

To clean the firing pin mechanism and get rid of the lubricant, follow these steps:

The DEWALT cordless framing nailer has two long springs that push the driver (firing pin) forward to drive the nails, then pulls it back to prepare for the next one. These springs usually last a long time, but they could also take damage, especially after lots of rigorous work. It’s a great idea to replace them after every 25,000 nails or when you notice that the tool isn’t driving nails properly anymore.

Replacing the springs is easy, though the springs aren’t necessarily cheap. To replace them, follow these steps:

3. Motor Doesn’t Run When You Press the Trigger 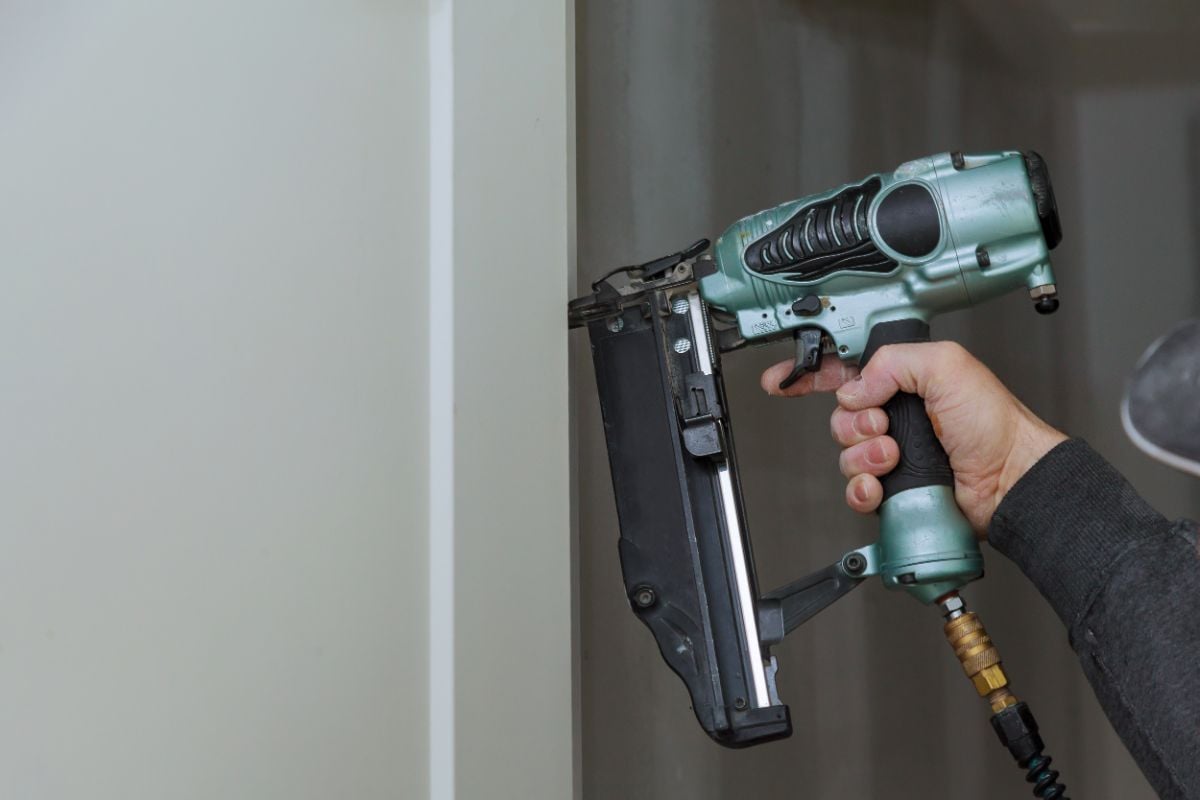 People often expect the worst if they press the trigger on their DEWALT cordless framing nailer with no result. But it doesn’t necessarily mean it’s time to replace the nail gun. It could also happen because of something simple, like the trigger lock or a stalled motor. These are easy things to check and fix.

Something as simple as the DEWALT’s built-in safety trigger lock could cause the motor not to spin when you press the trigger. Thankfully it’s the easiest fix on this list.

If that does not solve the problem, try rapidly wiggling the switch from side to side. It should disengage.

Sometimes, the motor is not turning because it has stalled. This often happens as a safety measure to protect the tool if a nail gets jammed. If that is the case, remove the jammed nail using the instructions explained earlier.

Once you’ve confirmed that there isn’t a nail stuck in the nail gun’s nosepiece, rotate the stall lever to release the stalled mechanism. This will allow the motor to start turning again.

The DEWALT cordless framing nailer is quite an advanced piece of technology with sophisticated electronic circuitry. It might be necessary to reset the electronics to function properly again.

Doing this is effortless. Release and remove the battery, keep it that way for between three and ten seconds, then replace it. This will give the circuitry time to clear away all electricity and reset to the default operating mode. 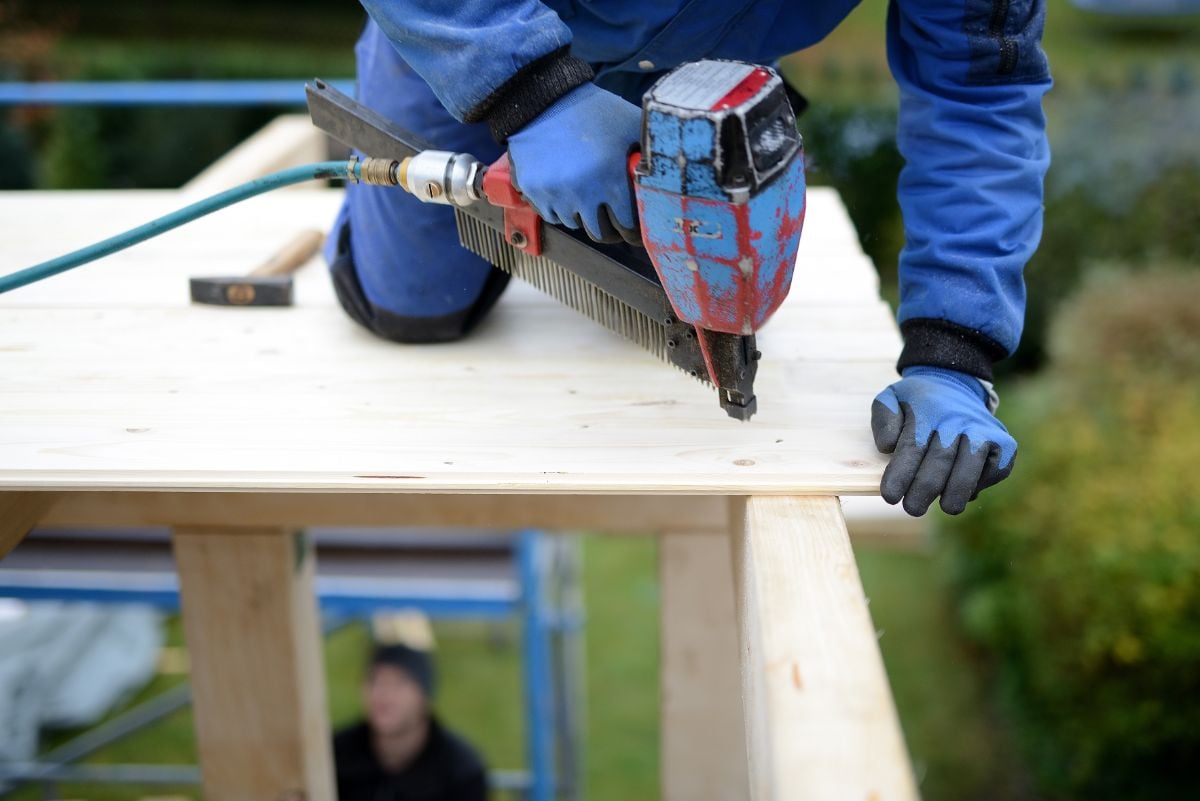 You may sometimes hear the nailer’s motor spinning, but it won’t fire no matter how you press the trigger. The fact that the motor is spinning shows that the electronics and primary components are all working as they should. This problem could be related to the dry fire lockout, the battery, or a damaged driver/return assembly.

The DEWALT cordless nailer has a built-in safety function that disengages the firing pin when you don’t have nails loaded since dry firing the nail gun could damage the mechanisms and even harm the user. It might seem obvious, but you should first check if you have nails loaded. If not, load a cartridge of nails into the nail gun.

It takes more power for the DEWALT nailer to shoot a nail than it does to power the motor, so the fact that the motor is running doesn’t necessarily mean that your battery has enough power for the tool to operate correctly.

Check the battery’s power indicator. If it’s running low, charge it. If the battery is very hot, switch off the nailer and disconnect it for a few minutes to let it cool down. If that doesn’t work, it is probably time to replace the battery entirely.

The piston and the driver/return assembly can get worn over time. The tip, which should be slightly angled, can become round which will cause misfires and even jammed nails.

DEWALT recommends taking the nail gun to a certified repair center to fix it, which is preferable on some older models. Still, on others, it is a repair you can do yourself if you choose (and preferably if the warranty has already expired). Replace the driver/return assembly by following these steps:

5. The Nailer Makes a Strange Noise 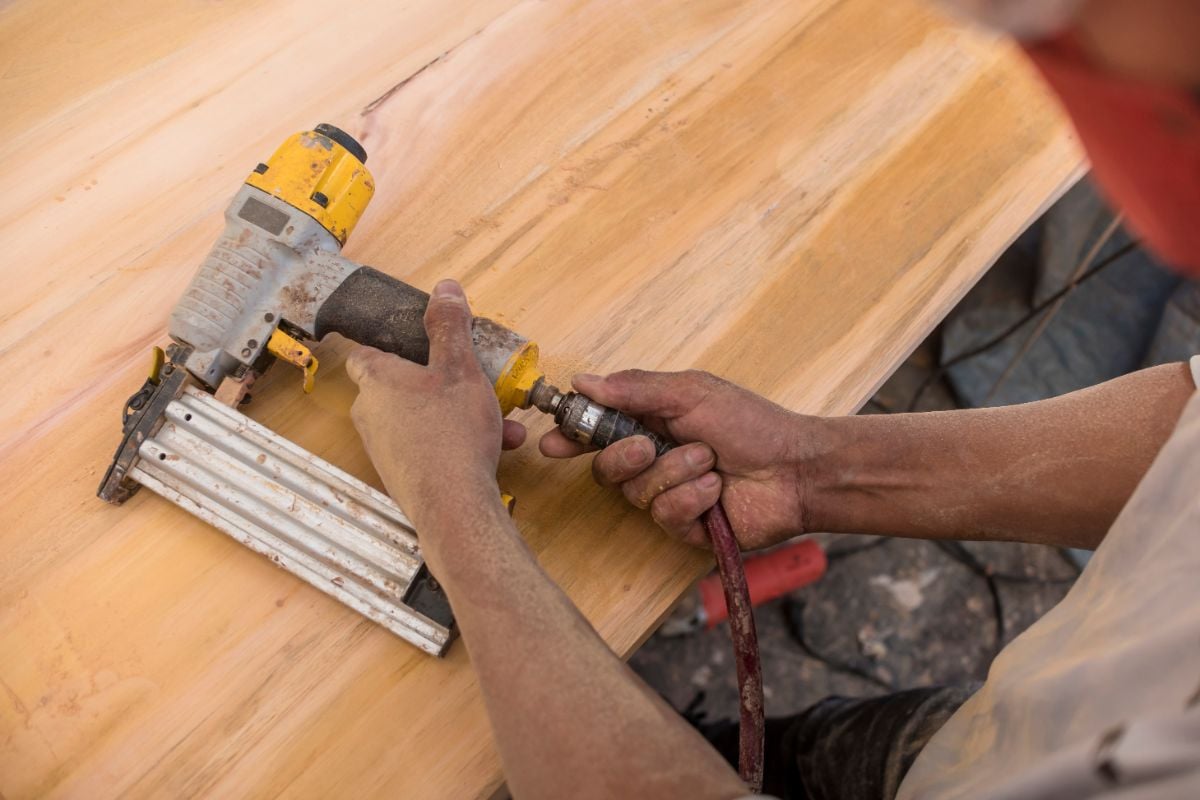 All electric tools are noisy, as a rule, but after using a tool for a while, you should notice if it starts making a different noise. For example, it’s not normal to hear a grinding, clanging, or whining noise from your DEWALT cordless framing nailer, and if you hear such noise, it’s likely coming from the motor or the driver.

You could hear strange noises if the nailer tries to drive nails while there’s a nail stuck in the nosepiece or when the driver gets stuck in the down position.

To fix this, first clear out any jammed nails from the nosepiece, as explained in part 1. After reassembling the nailer, rotate the stall lever to force the driver back into position.

Note that the driver could get so stuck that the stall lever can’t release it anymore. If that happens, you will have to remove the top cap (as explained earlier) to manually remove the driver, then re-insert it in the correct position.

Unfortunately, the assembly could be damaged due to wear and tear and the driver getting stuck repeatedly. In that case, you will have to replace the driver assembly entirely. To do so, follow the steps discussed in point 4.

If the noise happens when the motor is spinning but while you’re not firing it, it could be the motor acting up. If this is the case, you will usually feel the machine getting hot, and you might even see some smoke, though this is very rare.

You can turn the nailer off and let it cool down for a while since this could happen after it’s been working for too long.

Unfortunately, if that doesn’t work, it’s terrible news: the motor needs replacing, and this is not a repair you can easily undertake at home. The parts are hard to find, and even if you can find them, DEWALT still recommends that you do not try to replace the motor yourself.

If you wish to do so, you can try to disassemble the entire machine, which you will have to do to reach the motor. Maybe you can find another second-hand nailer with the same model motor; you might be able to make it work if you can. But generally, buying a new DEWALT nailer is cheaper than trying to replace the motor.

6. Driver Blade Constantly Gets Stuck in the Down Position 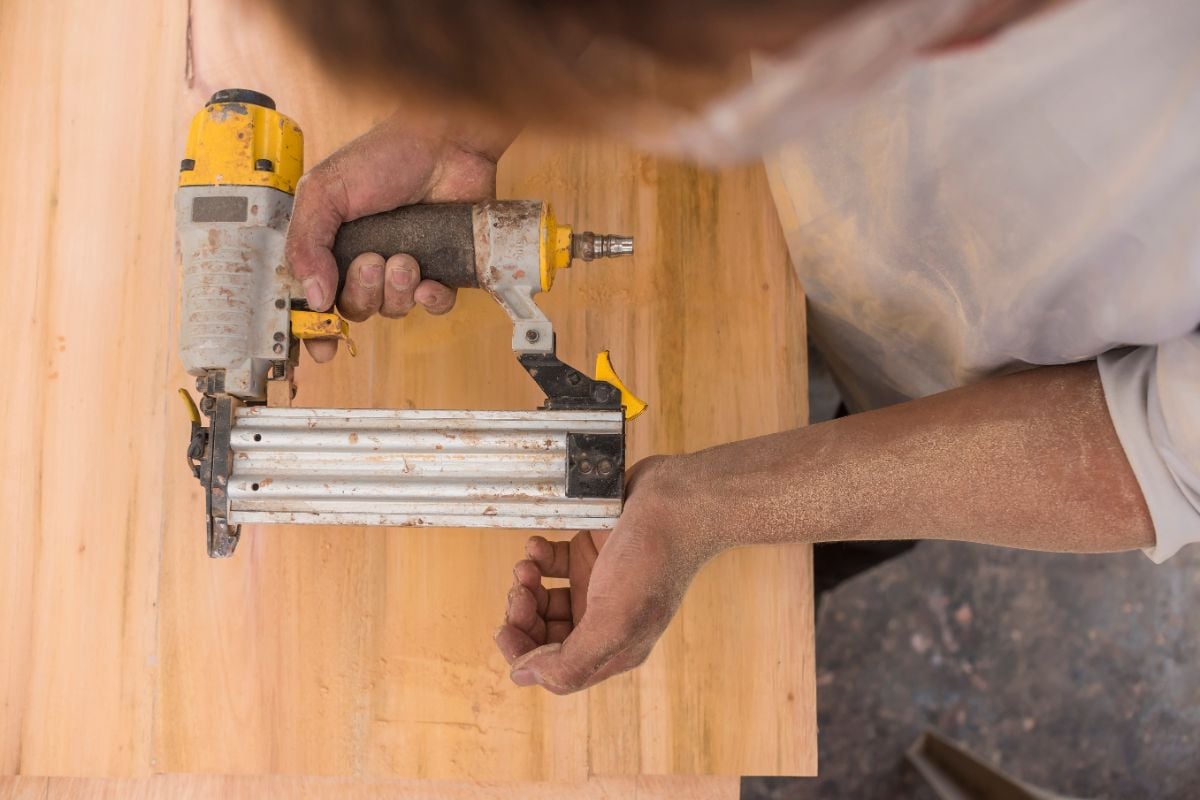 We have already touched on this point a few times, but it is a significant problem that causes so many other problems that it’s worth mentioning separately. The driver blade can sometimes get stuck in the down position after firing. This will cause various other problems, like noise and jamming.

You can use the stall release lever to return the driver blade, but this indicates a bigger problem (and a significant source of frustration) if you have to do it repeatedly.

Solution 1: Let the Tool Run In

A brand-new DEWALT cordless framing nailer will struggle, especially with longer nails. According to DEWALT’s official manual, it could take between 500 and 1,000 nails for all the parts to mesh and wear in, and until then, the manufacturer recommends that you stick with shorter nails. Longer nails could cause jamming or nails not driving flush.

So, if it is a new nailer, it’s worth taking the time and doing some smaller jobs with smaller nails to let the tool run in.

The DEWALT nailer supports different speeds for different uses. For example, longer nails in softer wood, or short nails in harder wood, won’t work well on speed setting 1. If you are trying to use it in one of these scenarios, try changing the speed setting to 2.

Solution 3: Check for Debris in the Nosepiece

Wear and tear will always happen. As you use the nailer, the nails will leave behind small pieces of metal in the nosepiece. These are usually so small that they won’t cause any problems, but occasionally a bigger piece could break off and get stuck in the nosepiece. This leads to nail jams and the driver getting stuck.

When you open the nosepiece to remove the jammed nail, always check the nosepiece for debris and clear it out with some compressed air.

Solution 4: Change Your Material or Fasteners

Every DEWALT framing nailer is rated for a particular type of use. Trying to drive the wrong kind of nail into a material that’s too hard will cause the driver to jam. Check that your nailer is rated for the kind of materials you’re using, and if not, get the appropriate materials.