Here's a mega list of all the different types of bananas grown and enjoyed throughout the world. This in-depth banana article includes a banana nutrtional facts chart. 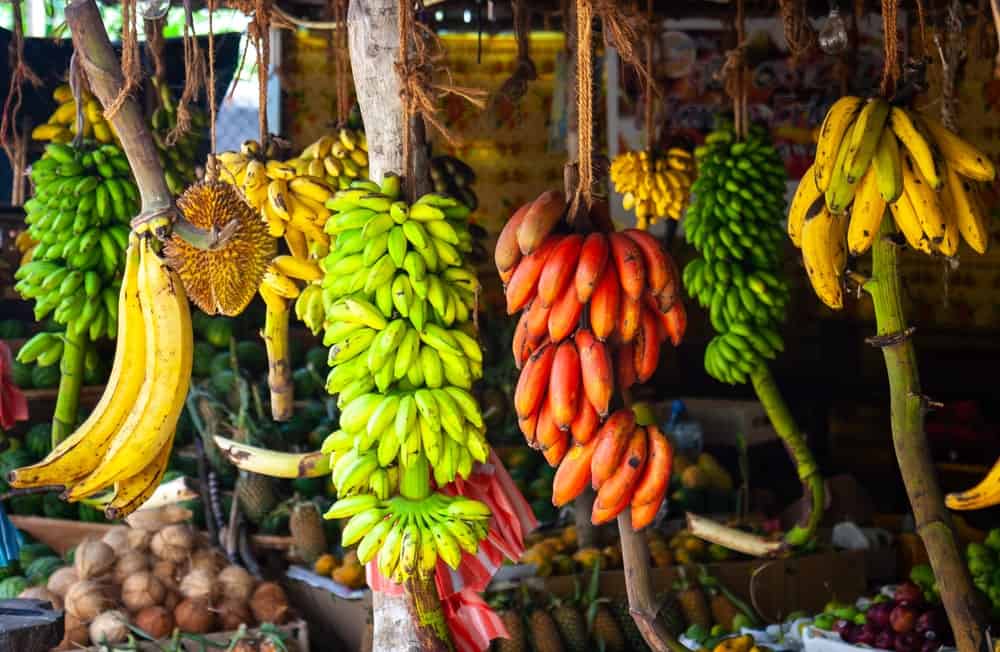 Bananas are botanically classified as a berry and are a product of large flowering plants under the genus of the Musa. They come in different colors, sizes, and firmness but are recognized by their curved, elongated shape, starchy flesh, and rind. Bananas grow in clusters and hang from the plant, ready to be collected. They are usually seedless and come from two species: the Musa Acuminata and the Musa Balbisiana. Around 100 billion bananas are sold throughout the world annually. 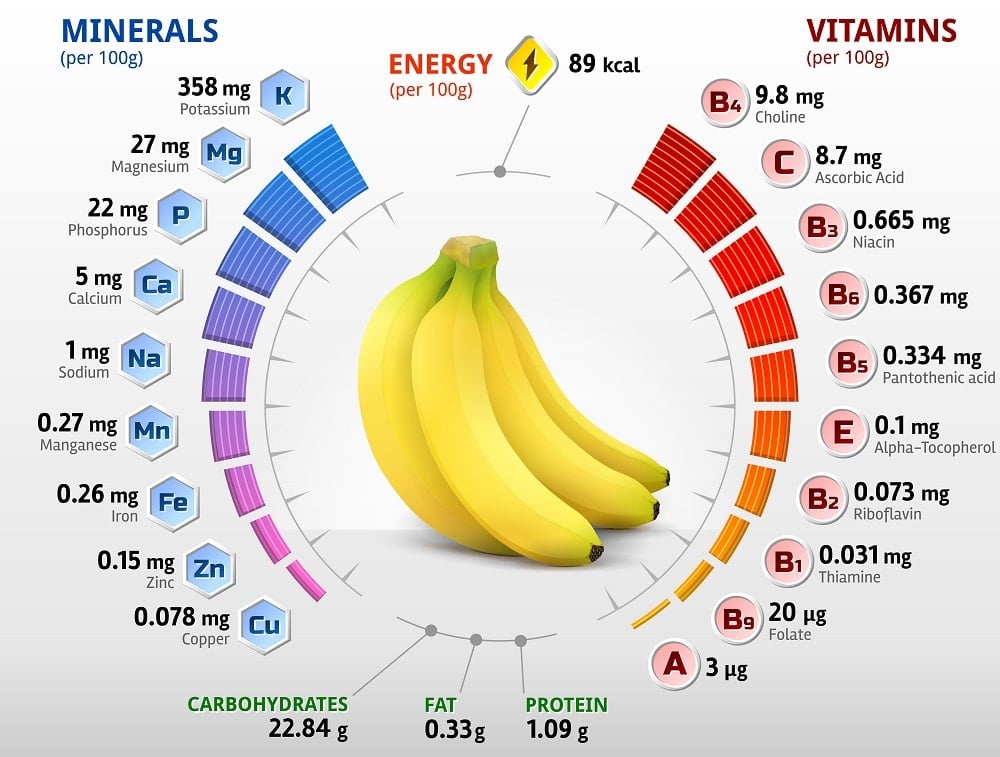 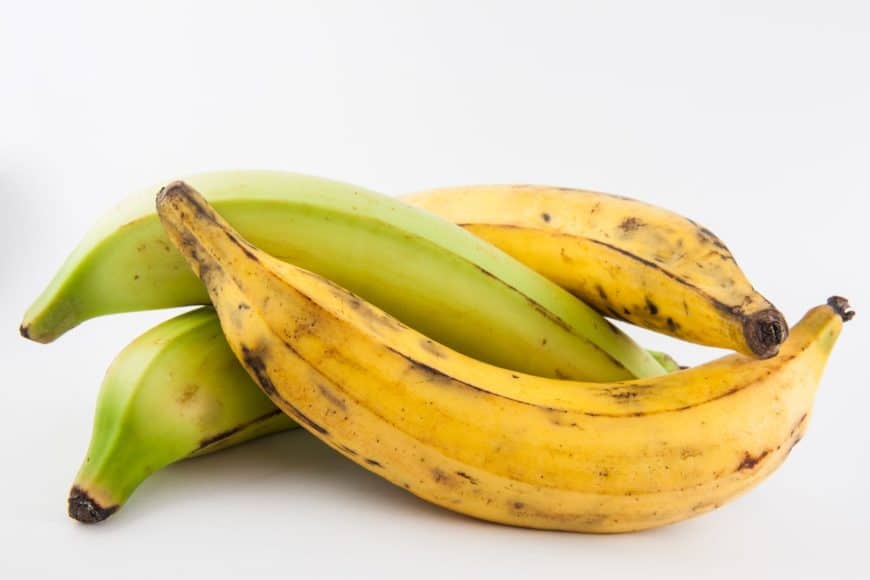 Plantains have really high starch content and are often used as a vegetable. When they are allowed to ripen, plantains go through the same changes in colors as bananas. They are never as sweet as bananas, which is why they are usually used in savory dishes.

Europe and North America distinguish between bananas and plantains based on their intended use. In the American market, plantains are considered different food items from a banana. The plantain isn’t as sweet as the banana and contains a higher content of starch. They are usually incorporated in cooked dishes instead of consumed raw like bananas are. 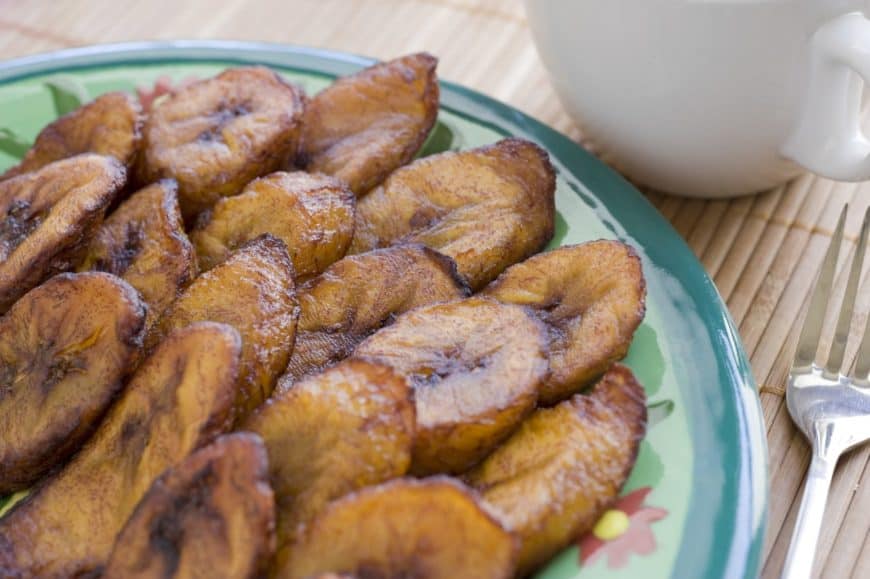 Another approach towards classification is dividing bananas into cooking and dessert types. In such cases, the plantain is considered as a subgroup for the banana. However, it doesn’t work in a few regions including South Asia, where bananas can be cooked or eaten raw as desired.

See also  What to Serve with Shepherd's Pie

The range of shapes, sizes, and colors for the bananas are also more expansive in the region than other parts of the world, which is why distinctions are harder to make. Local languages also do not contain distinguishable words for plantains and bananas. Therefore, the difference between the fruits is only recognized depending on the locality. 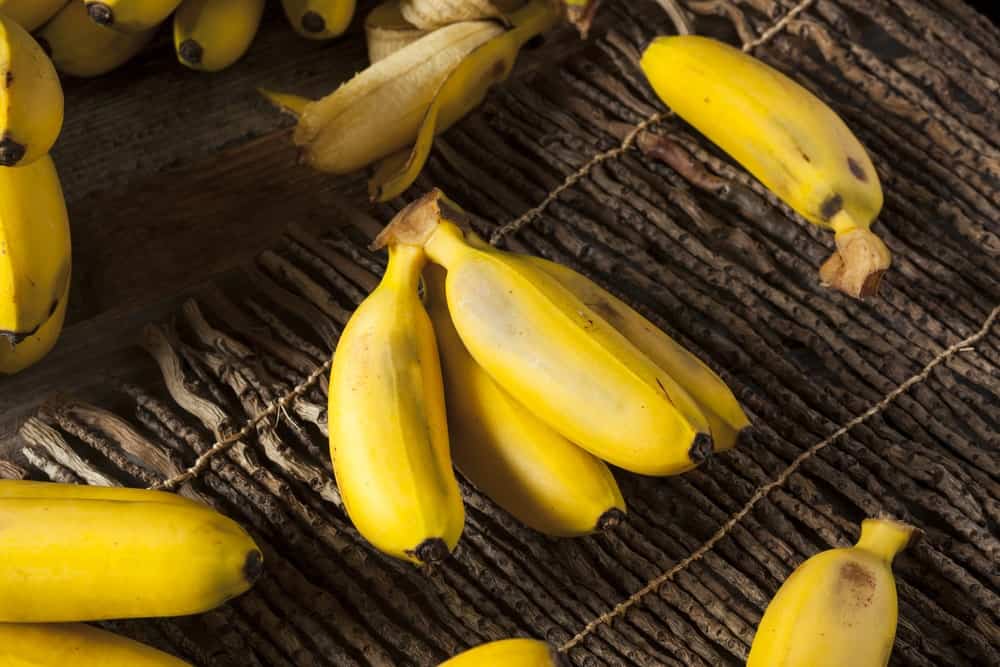 Baby bananas are also called Lady’s Finger bananas. They are sweeter and smaller than the more popular Cavendish bananas. Usually, they are eaten raw just like Willian bananas. They make really great portion-controlled snacks, which is why a lot of parents buy them for their kids. Baby bananas come in an average size of 3 inches in length and display a bright yellow color. They are creamy in texture and have a honey-like, sweet flavor. 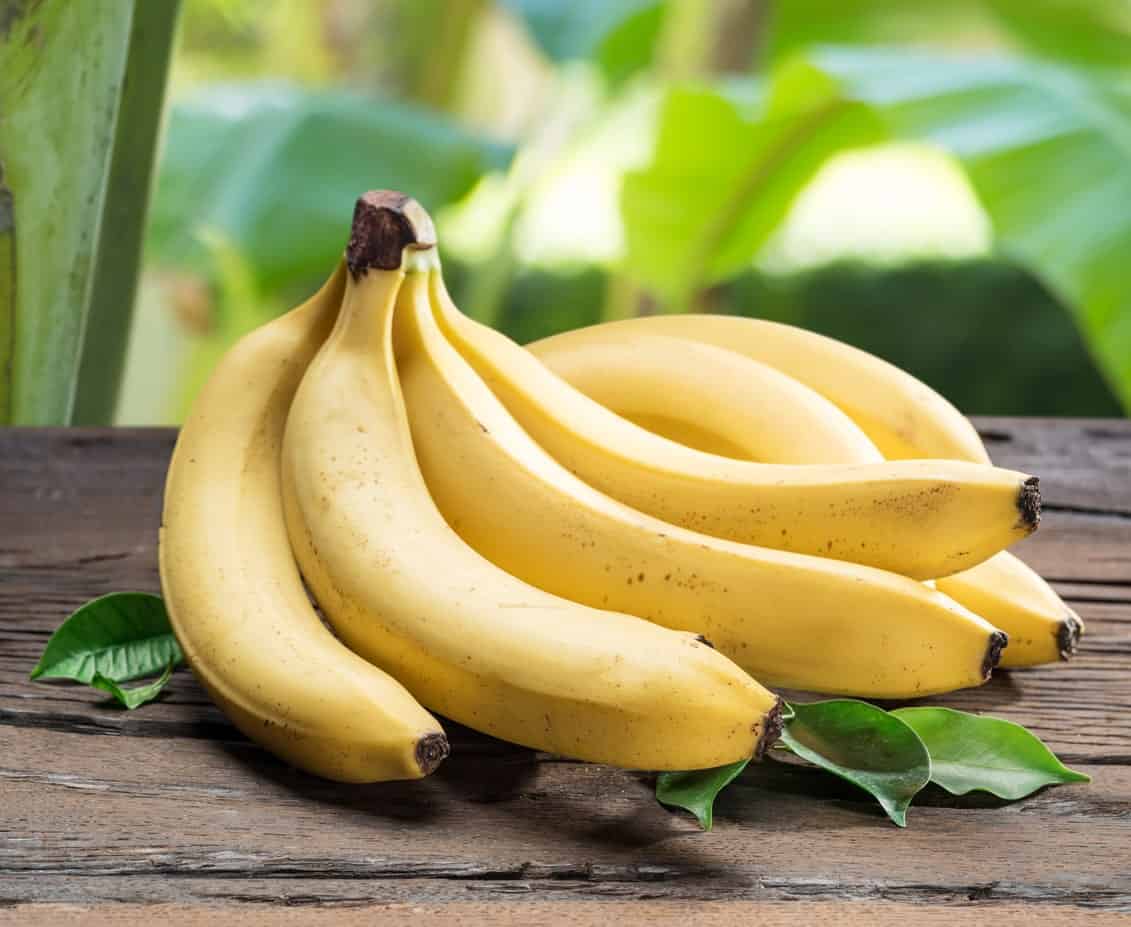 The most popular variety of bananas is known as Cavendish bananas. They are slightly sweet bananas found in supermarkets all over the world. They have three main stages of ripening: under-ripe, ripe, and over-ripe. Cavendish bananas go from green to yellow, to deep yellow with brown spots. Every stage of the banana is used in different ways, even the over-ripe bananas are popular for bread and smoothies. 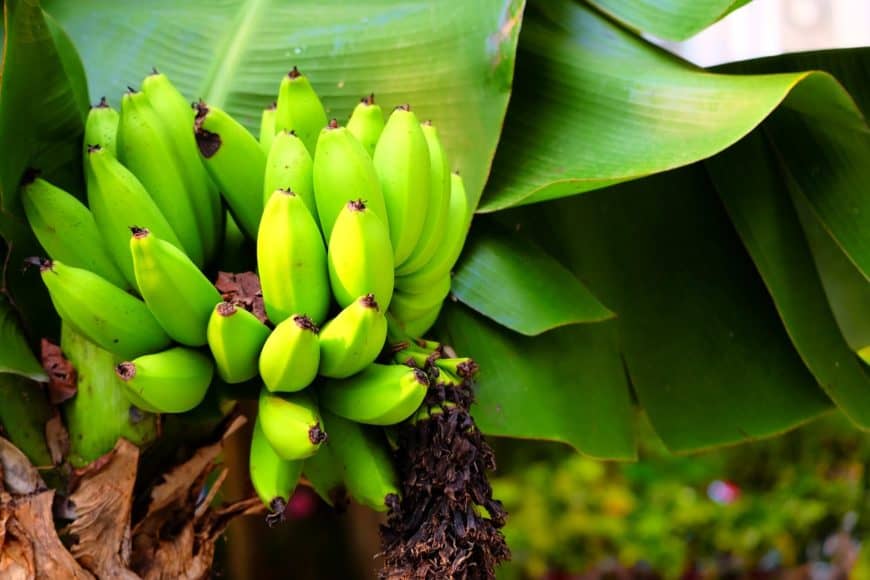 The Dwarf Cavendish Banana isn’t named after the size of the fruit but rather the height of the pseudostem. They have purple or maroon spots when they are young and become more yellow over time as they ripen. They are the most common variety of Cavendish bananas. 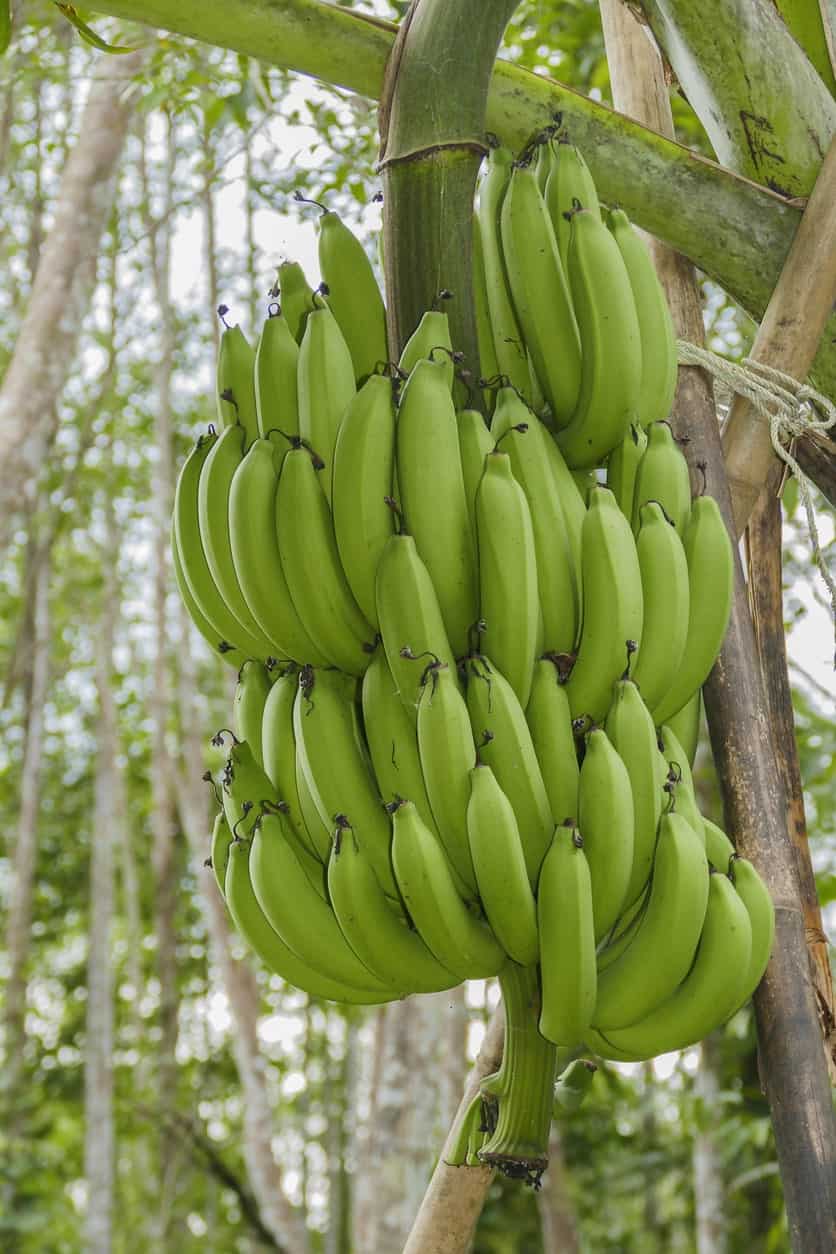 The Giant Cavendish Banana is more commonly known as the William banana. They are sweet, mild, and large in size. They are often sold under-ripe and green since it is easier to export them. They continue to ripen to a yellow color and are eaten raw in many regions around the world. 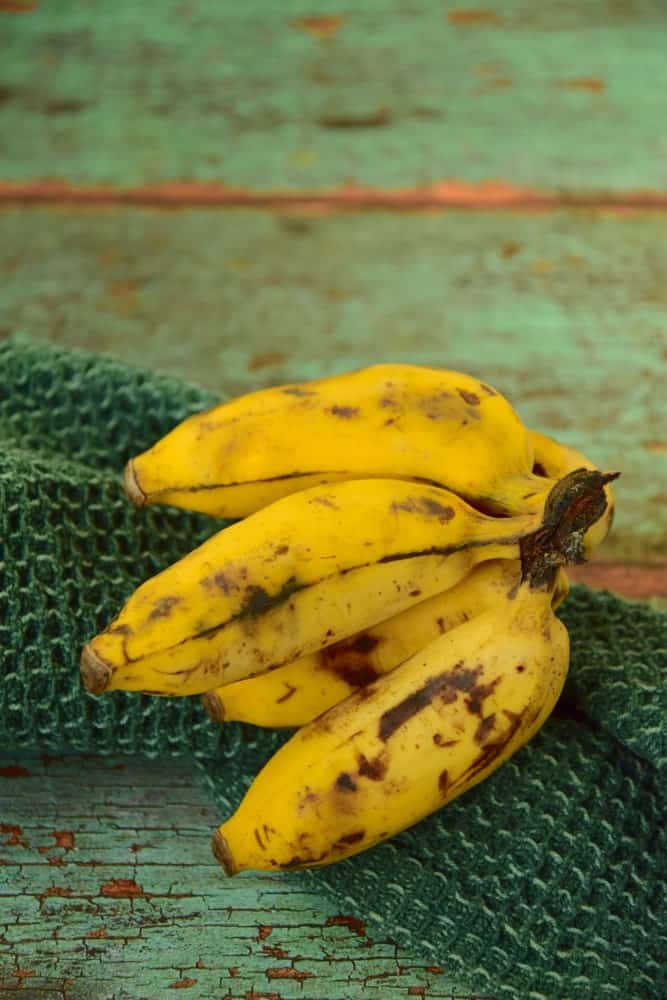 The Pisang Raja bananas are really popular in Indonesia and are also commonly known as Musa Belle bananas. They are used to make a popular street food called Pisang Goreng (banana fritters) because of their delectable and firm texture. They taste sweet like honey and have a range of colors from yellow to orange. Despite their great taste, the Pisang Raja banana isn’t popular in other regions of the world and it is really difficult to come by in local markets outside Indonesia. 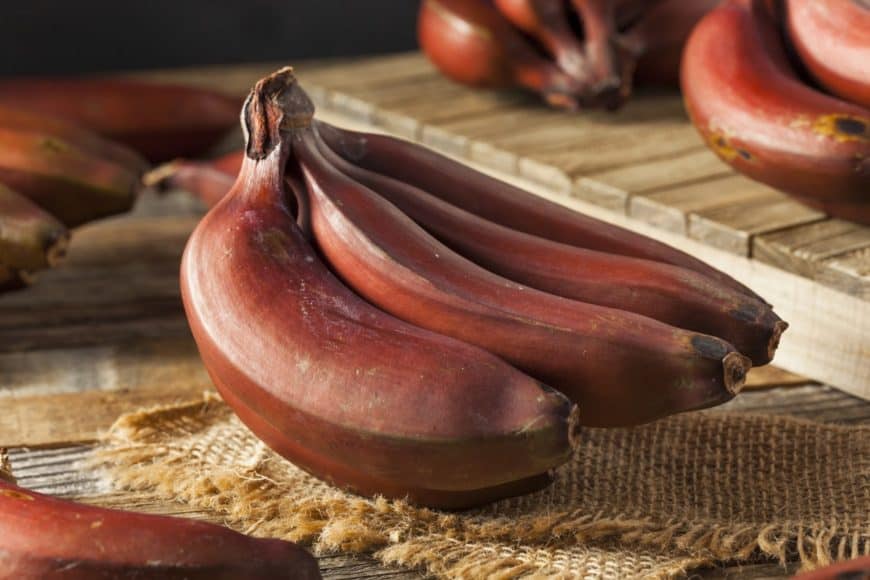 Red bananas are a popular fruit with reddish-purple skin. They come in different sizes and have a light pink or orange-colored flesh. They have a slight raspberry flavor and are much sweeter and softer than the Cavendish bananas. They are mainly cultivated in South America, Asia, East Africa, and the United Arab Emirates. Red bananas are most popular in the region of Central America where they are used for juices or eaten raw. 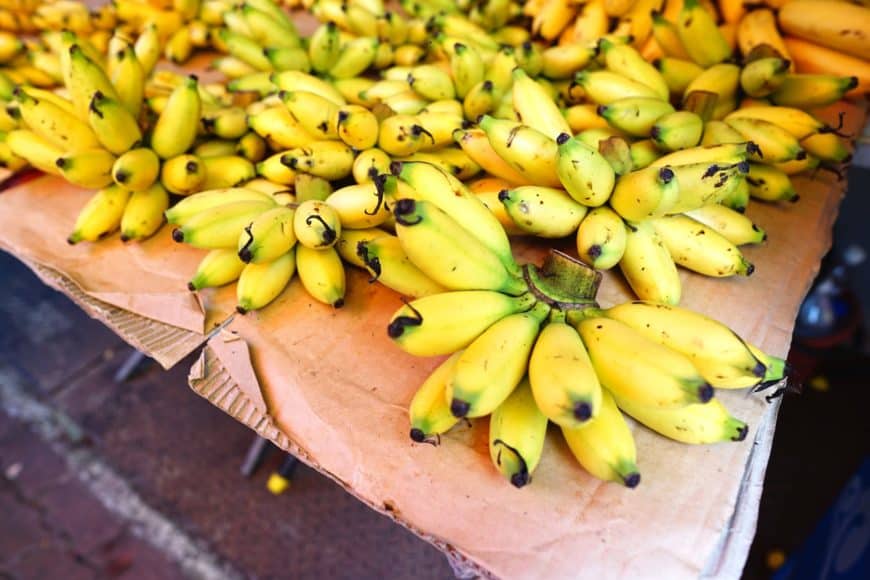 The Manzano Banana is a popular dessert banana that has a mild taste similar to apples or strawberries. They turn black when they are fully ripe and are a great source of Vitamin C, potassium, amino acids, and fiber. It is found all year round in Mexico, the Caribbean, and South America. They have a velvety texture and are used in pies, pudding, ice cream, smoothies, and many other dishes. 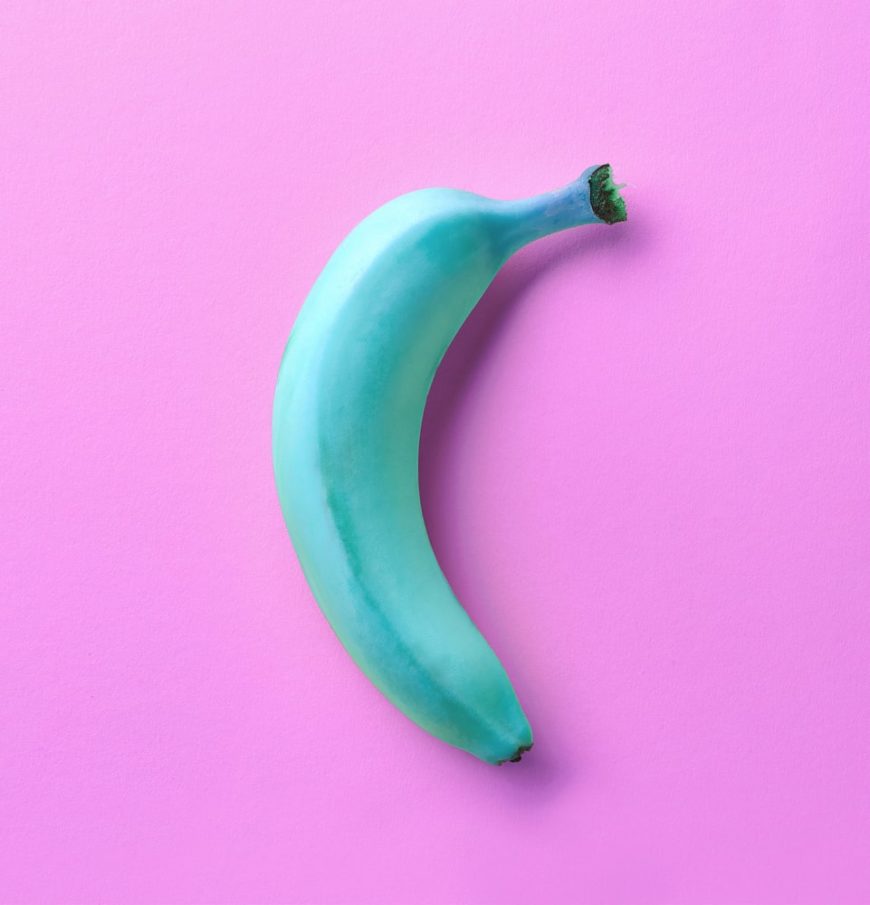 The Blue Java banana is also known as the Ice Cream Banana due to its texture and sweet vanilla flavor. They are an aromatic, sweet fruit which is hardy, cold-tolerant bananas. They are also wind-resistant, which makes them a really popular fruit in colder regions. They take around 15-24 months to bloom and are popular due to their vanilla custard taste. They can also be cooked but are usually eaten raw as a treat. They have an unusual blue color when they are ripening. 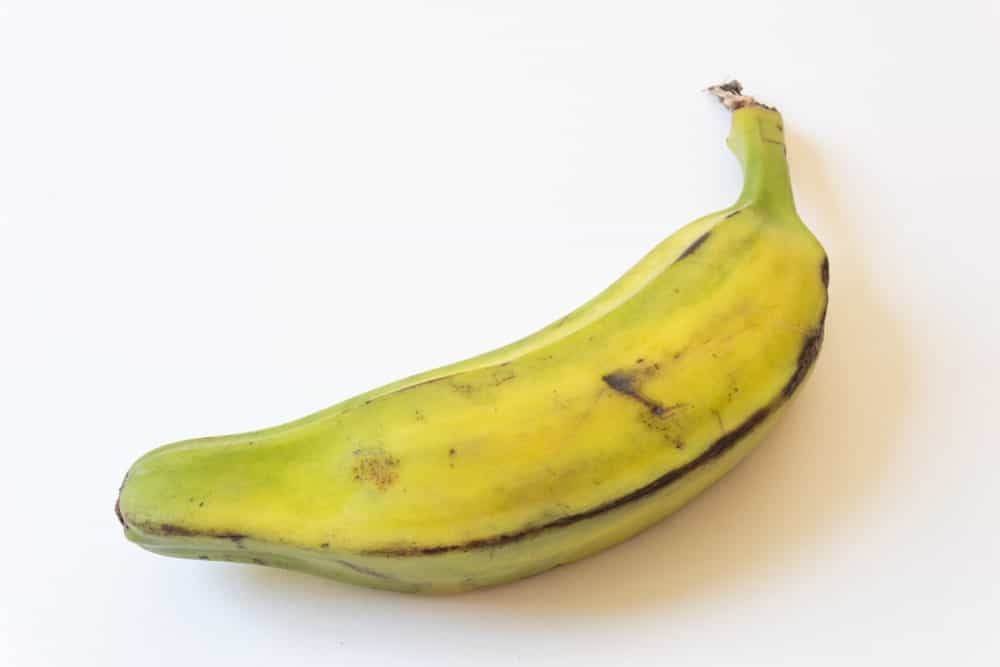 They are available all year round in tropical and subtropical areas. They have magnesium, potassium, fiber, as well as Vitamin B and C. They are used like plantains when they are under-ripe or green and eaten raw when fully ripe. In Filipino, Thai, Latin, Indian, and Caribbean cuisines, they are used as savory ingredients with chilies, pork, chicken, lines, berries, cream, and much more. 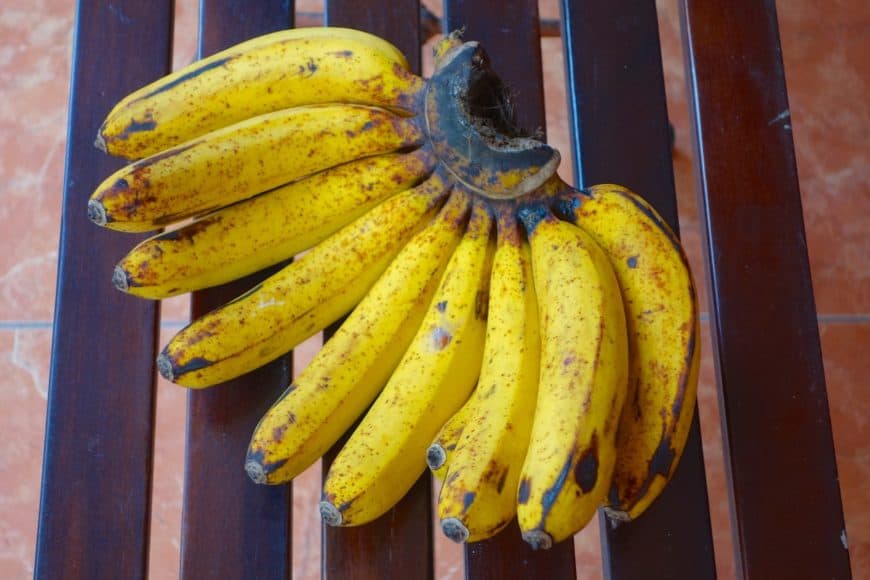 The Barangan banana is yellow with small black dots all over the rind. It has a sweet taste and the flesh is slightly white in color. It has no seeds and is eaten as a dessert in many regions. It is really popular in North Sumatra since it is a tasty fruit packed with nutrients like carbohydrates, proteins, and vitamins. 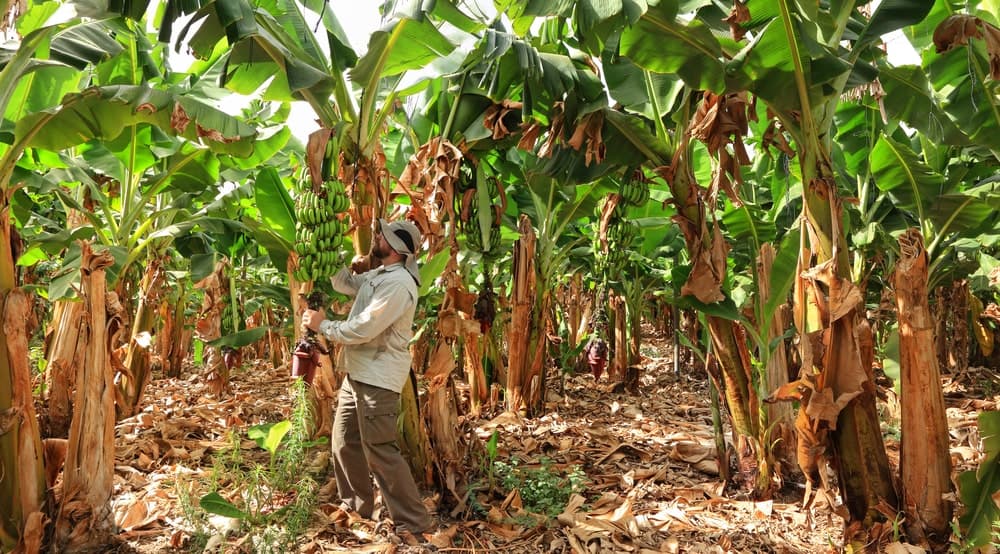 The Goldfinger banana is typically grown in the area of Honduras and was developed by Phillip Rowe and Franklin Rosales as a pest-resistant banana. It is edible to eat when green but usually after cooking. It is often eaten in Western regions when ripe and is sold in most North American and European markets. It was developed after a program of conventional hybridization with the gene pool of more than 800 different banana cultivators from Southeast Asia. 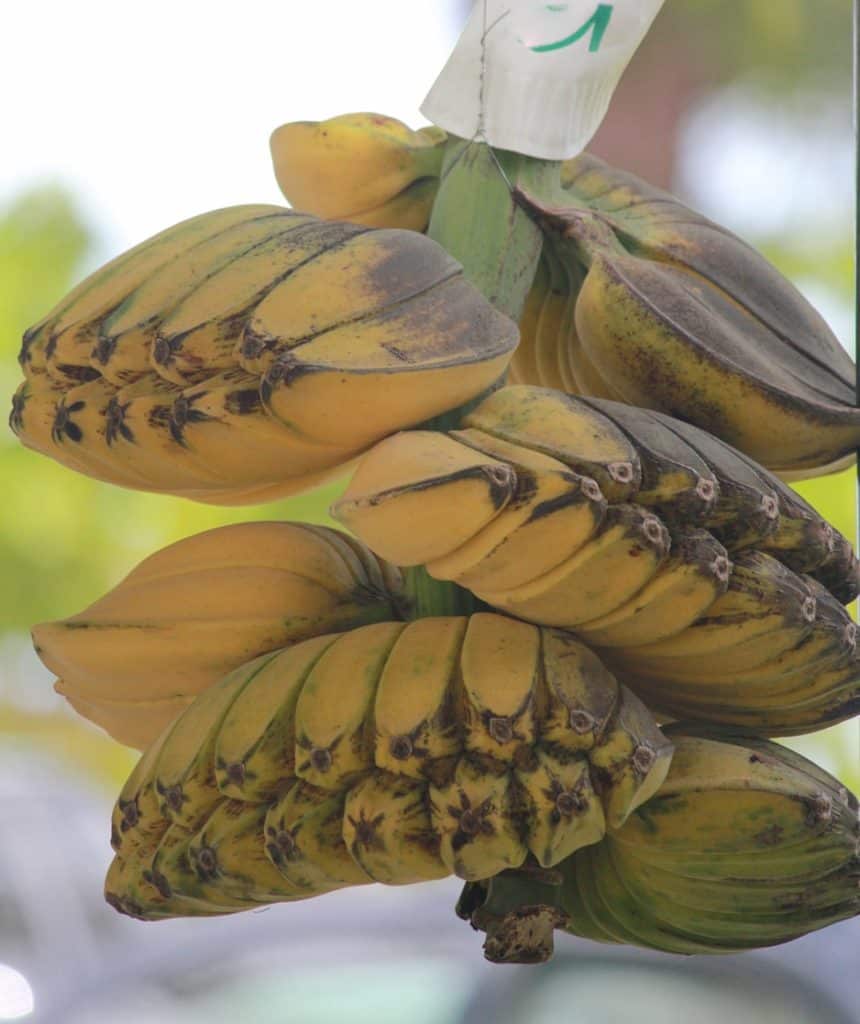 Saba bananas originate from the Philippines and are primarily used for cooking. They are sometimes eaten raw but are a staple in Philippine cuisine. They have large, robust pseudostems and the leaves and trunk have a dark blue-green color.

The bananas have a unique angular shape and have thick skins, which makes it really easy to ship them across the world. They contain the same nutritional content as potatoes and can be seen as ingredients in dishes like the halo-halo, turrón, and ginanggang. Saba bananas are also the main ingredient for the popular condiment called banana ketchup.

There are many popular recipes that incorporate bananas all around the world. They can be used for desserts and savory dishes alike. 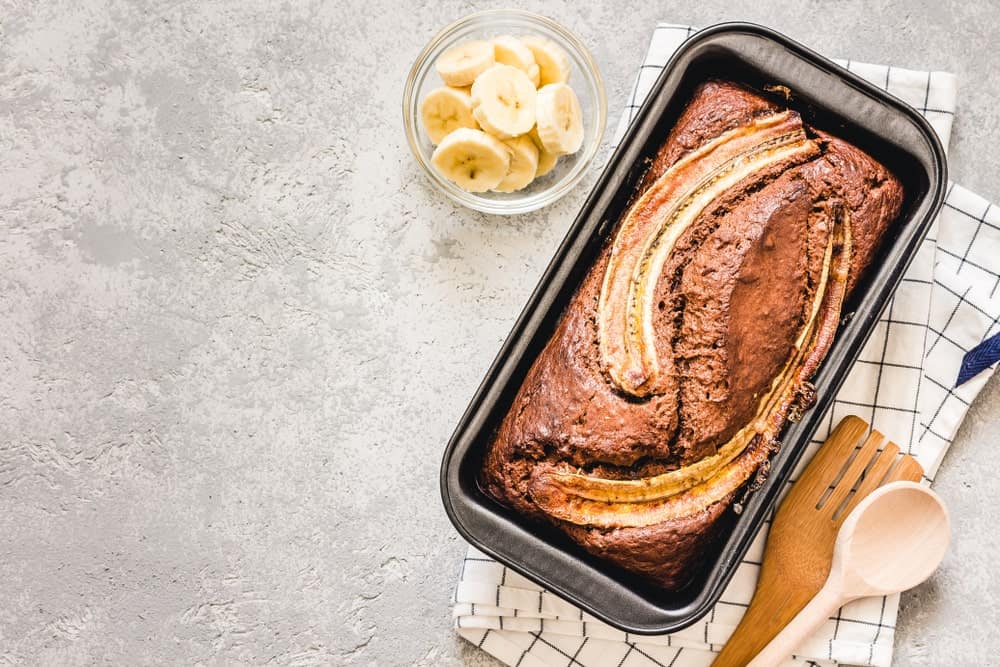 Banana bread is one of the most popular dishes in the world. It is bread made from mashed bananas and has a moist, cake-like texture. The National Banana bread is celebrated on 23rd February and different recipes have been published in thousands of cookbooks around the world. An overripe banana is considered better for the bread since it has a denser texture and can be easily mashed. 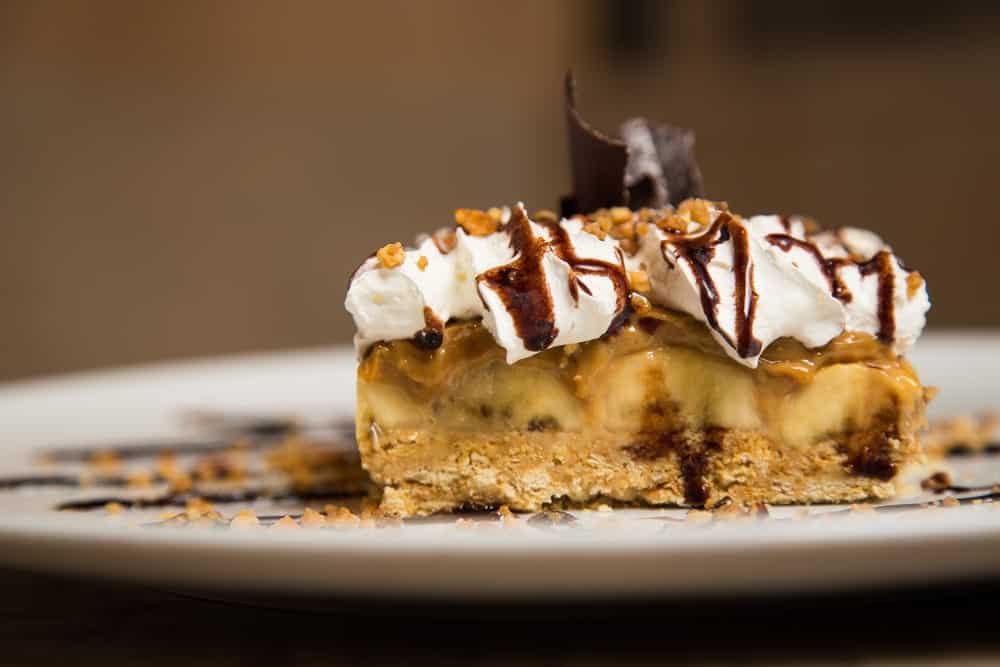 The Banoffee pie is a popular English dessert that combines toffee, cream, and bananas with a buttery biscuit base. The name is derived by combining the words ‘banana’ and ‘toffee’ together. The toffee is usually made by caramelizing condensed milk until it is a silky, bitter, and sweet caramel. Nigel Mackenzie, the owner of Hungry Monk, has been credited with the invention of the pie. 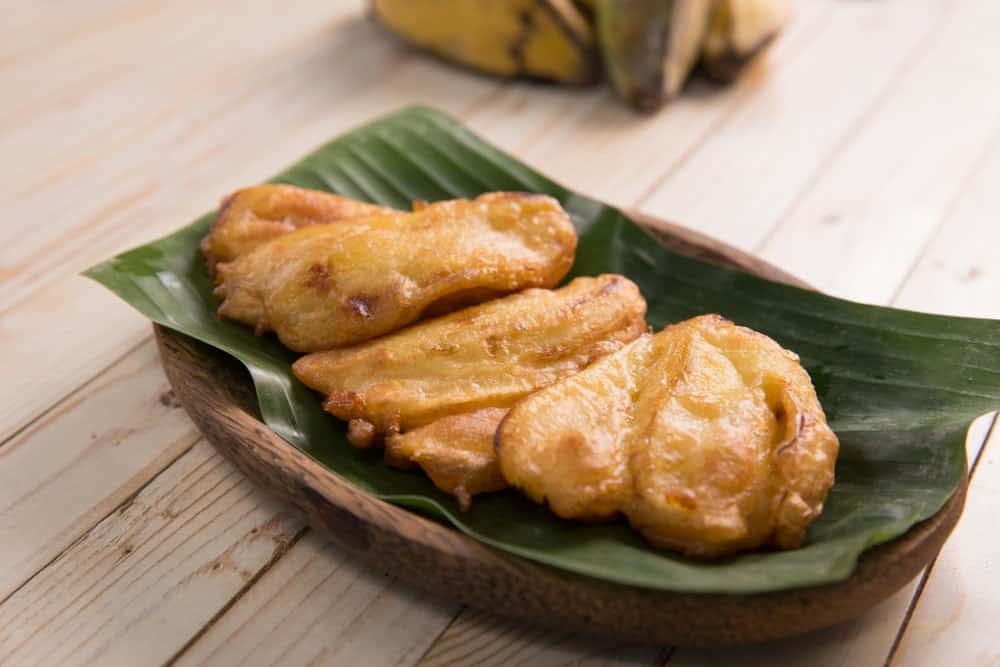 The Pisang Goreng is a popular Indonesia dish similar to banana fritters. They are a popular snack and street food consisting of fried plantains or bananas. They are mostly sold by street vendors are usually battered before deep frying in palm oil. They can be eaten plain or paired with cinnamon sugar, cheese, vanilla ice cream, chocolate, and many other toppings.

We can bet that you did not know that there were so many different types of bananas, right? Well, now that you do its time to change it up and try the ones that you can get your hands on. Happy Hunting!