Our recipe for Orange Creamsicle Angel Food Cake is an angel food cake version of the popular summer time treat. These cakes are leavened by whipped egg whites, which give them a soft, fluffy texture. The lightness of the egg whites makes them a good kind of cake to serve in the summer time, since when you’re hot, you probably do not want to indulge in desserts that are too rich and heavy.

Popsicles have only been in existence for a little more than 100 years. In 1905, Frank Epperson accidentally left a mixture of a sugar sweetened syrup outdoors with a wooden stirring stick in the liquid. It was winter time, and the next morning, he discovered that the liquid had frozen around the stick and could be lifted from the container to make a sweet, tasty treat. Epperson was only 11 years old, and he shared his idea with the neighborhood kids who loved it.

Almost 20 years later, Epperson filed for a patent on his idea, and by this time, he was a father. He created these treats for his kids, calling them “Eppsicles.” His own children changed the name, calling them “popsicles” in honor of their dad. 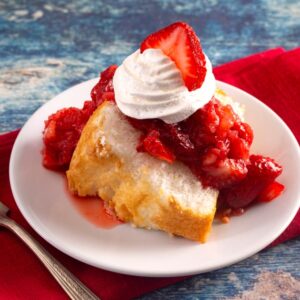 April Freeman
With swirls of orange and vanilla, our recipe for Orange Creamsicle Angel Food Cake is reminiscent of those tasty, cool, and refreshing popsicles served in the summer. Light and refreshing, this recipe is a perfect summer time dessert that is not too rich and heavy for a warm day.
Print Recipe Pin Recipe Add to Collection Go to Collections
Prep Time 20 mins
Baking Time 35 mins
Total Time 55 mins
Cuisine American
Servings 12 Slices

In 1925, Epperson sold the patent rights to the Joe Lowe Company in New York, and they began to make  popsicles on a commercial scale. In time, they began creating interesting variations on the standard fruit flavored ice pop.  One such variation was the Orange Creamsicle. Orange Creamsicles consisted of a serving of smooth, creamy vanilla ice cream on a stick, encased by a layer of frozen orange juice. The fruity, acid flavor of the orange juice is offset by the creaminess of the vanilla ice cream.  Angel food cakes sound like they would be hard to make, but they actually are quite easy, particularly if you have a stand mixer to handle the egg white beating for you. The egg whites are whipped to a tall froth and then the dry ingredients are gently folded into the fluff. The main thing to remember when making angel food cakes is to take your time and handle the batter gently to keep maximum air in the batter.  You also need to keep in mind that an angel food cake is baked in an ungreased tube pan. This sounds strange, but the cake needs to cling to the cake pan for support in baking.  Angel food cakes are typically hung upside down for a period of time after baking. If you do not do this, the cake may collapse as it cools. Some angel food cake pans have small feet to provide for this hanging, but if yours does not, simply invert the cake with a funnel in the center hole to create a kind of stand for the cake to cool upon.
Keyword Creamsicle Angel Food Cake, Dessert, Recipe