Thick and creamy with the flavors of bacon and herbs, our recipe for Corn Chowder is a wonderful choice for days that are wet and chilly. Coming together quickly with ingredients that are typically kept on hand, this recipe is great for nights when you don't know what to cook.

Everyone has heard of Clam Chowder, but not as many people are familiar with Corn Chowder. Loaded with delicious seasonings and the satisfying crunch of yellow corn, our recipe will become a favorite for cold, raw days. It is thick, creamy, and very filling, including the flavors of corn, bacon, and garlic. 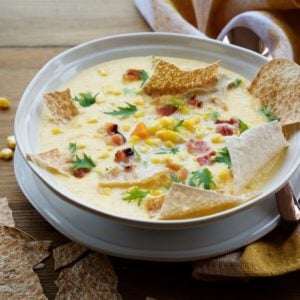 April Freeman
A chowder is a thick soup or stew that is rich and satisfying. Generally, chowders are thickened by creating a cornstarch or flour roux at the beginning of the soup making process. Meat and veggies are added and cooked until soft and tasty, and at the very end, cream, half and half or milk are added to the soup to create that distinctive creamy chowder texture. Our corn chowder follows this progression and only takes about twenty minutes to cook, start to finish.
Print Recipe Pin Recipe Add to Collection Go to Collections
Prep Time 15 mins
Cook Time 20 mins
Total Time 35 mins
Cuisine American
Servings 6 Servings

Our Corn Chowder recipe uses frozen corn. However, if you have fresh corn available that would be even better. Simply cut the kernels off of six or eight corn cobs with a sharp knife and then proceed with the recipe as instructed. Alternatively, you can use canned corn. Just drain the liquid from the can of corn and add it to the soup. Our recipe for Corn Chowder uses bacon bits. This can save you some cooking time and you won’t have to deal with frying bacon, draining the grease from it, and crumbling it. Using bacon bits in a recipe that calls for bacon is an easy shortcut for busy days. However, if you do not have any bacon bits on hand, feel free to do it the old fashioned way, by cooking the bacon in a pan or the microwave and chopping it into bits. Additionally, if you do not have either bacon bits or slices around, you could make a vegetarian version of this recipe by simply omitting the bacon altogether. We used red potatoes with the skins on. This adds a layer of texture and visual appeal to the recipe. However, if you are feeding someone who has texture sensitivities, feel free to peel the potatoes. Additionally, if you don’t have red potatoes on hand, you can use peeled Russet potatoes. The main thing to remember is that when you are cooking with Russet potatoes, pay very close attention to how soft the potatoes are getting as you cook them. Russets go from perfectly cooked to overcooked and mushy very fast. To thicken this recipe, along with starting with a flour-based roux, we blend up about half of the soup after the potatoes are cooked. We used a stick blender, but if you don’t have one you can use a traditional blender to puree the mixture. If neither of these kitchen appliances is available to you, you can just put half the soup in a deep bowl and use a potato masher to press the soup mixture into a mash before you return the mash to the remainder of the soup in the pot.
Keyword Corn Chowder, Recipe, Soup