Air conditioners and COVID-19 don't make a good mix. But when you know that this pandemic just isn’t going away any time soon, it's important to consider how AC filters play a big role in respiratory health. We spoke with Dave Indursky at Encon, to get his advice on keeping air conditioner filters and systems clean! 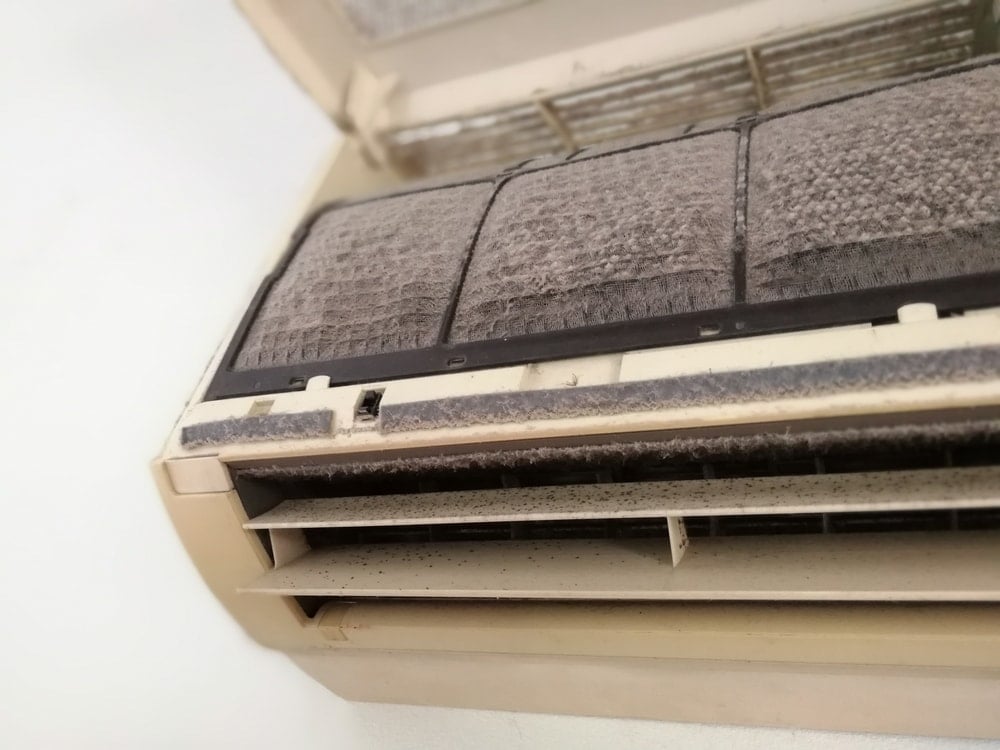 I don’t know about the rest of you homebodies, but I’ve been sick as hell lately!

Not from the coronavirus, fortunately. But I totally had a jumpscare for a minute because of the nonstop coughing that started out mild in my throat, then turned into the kind of wracking chest coughs we’ve been warned about. I’m just like the reptiles I adoringly write about: I need an exact temperature equilibrium, or I get sick and my whole system goes haywire.

Spending more time indoors might be your default state in summers if you don’t like the heat. I can’t blame you. The CDC says over 8,000 people died from heat-related deaths between 1999 and 2010. Sticking to the underside of the industrial-strength AC unit in my living room like some kind of Alien-esque facehugger is just part and parcel of those brutal New York summers.

But apparently, spending so much time parked under the air conditioner like some kind of reverse iguana clinging to a heat lamp likely factored into my getting sick, according to Moore HVAC. This damn cough lasted almost a month until I finally caved in and used my insurance’s telehealth provider to get some Prednisone and an asthma inhaler, which have worked wonderfully. Although one upside about having a cough last a month is that at least it reassured me it wasn’t the ‘rona.

It turns out that AC filters play a big role in respiratory health! We spoke with Dave Indursky at Encon, to get his advice on keeping air conditioner filters and systems clean!

Air Conditioners Get the Party Started for Airborne Bacteria 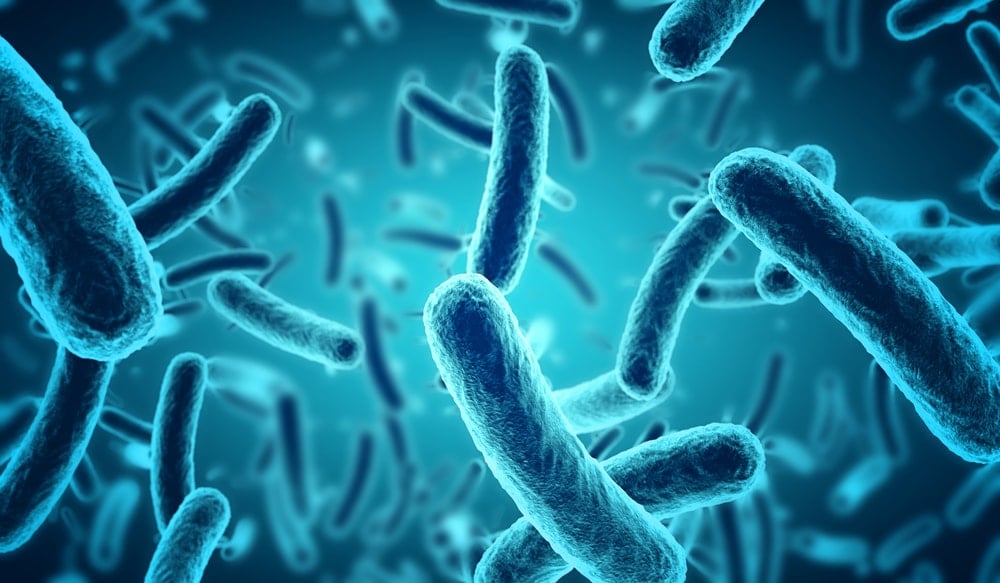 Well, you’d probably feel like garbage too if you had giant blue hot dogs just meat-slapping you in the face…

Before diving into the actual filters though, “air conditioning sickness” is an actual thing.

While WebMD has you convinced that everything under the sun is going to kill you whether it’s spray-on sunscreen or french fries, let’s be clear– doctors have a way of telling us some things are all in our heads. This is especially true of the women and femmes reading this: your throat feels scratchy, you can’t stop coughing, and you insist it’s from the temperature adjustment and they say no. Like come on, it’s 2020 and you seriously expect me to believe cold weather doesn’t cause colds? My ass! I get them like clockwork the second I trade my razors for leggings!

So, what causes you to get sick from air conditioners? Well, the coolant itself isn’t inherently bad. Rather, it’s the kind of air that’s already circulating in your home. And if you’ve already got mold afoot and it’s germy from things like lack of cleanliness and hoarding, or dust is gathering on everything because your executive dysfunction has kicked in and you just don’t fucking feel like dusting. Why dust when it’ll come back two days later, especially if you live in a pre-war apartment that’s completely falling apart and already has utter garbage air quality?

But whether you can control these things or not, all that dust, mold, and other nasties just fly right into the AC vents and spew back out like someone pulled an upper decker at a frat party. Toad help you if you’re allergic to any of these things.

And when it comes to the types of viruses that cause colds and cold-like symptoms like sore throat, coughing, and pissing off your airways, it turns out that they thrive in dry and cold environments, like your average air-conditioned apartment. The cold air apparently dries out the membranes in your nose that help fend off these diseases, which is why it’s a good idea to have a humidifier handy to stop your nasal passages from drying out and passing those gross, crusty blood boogers that lower your resistance.

Mystery solved! So onto the actual AC filters. 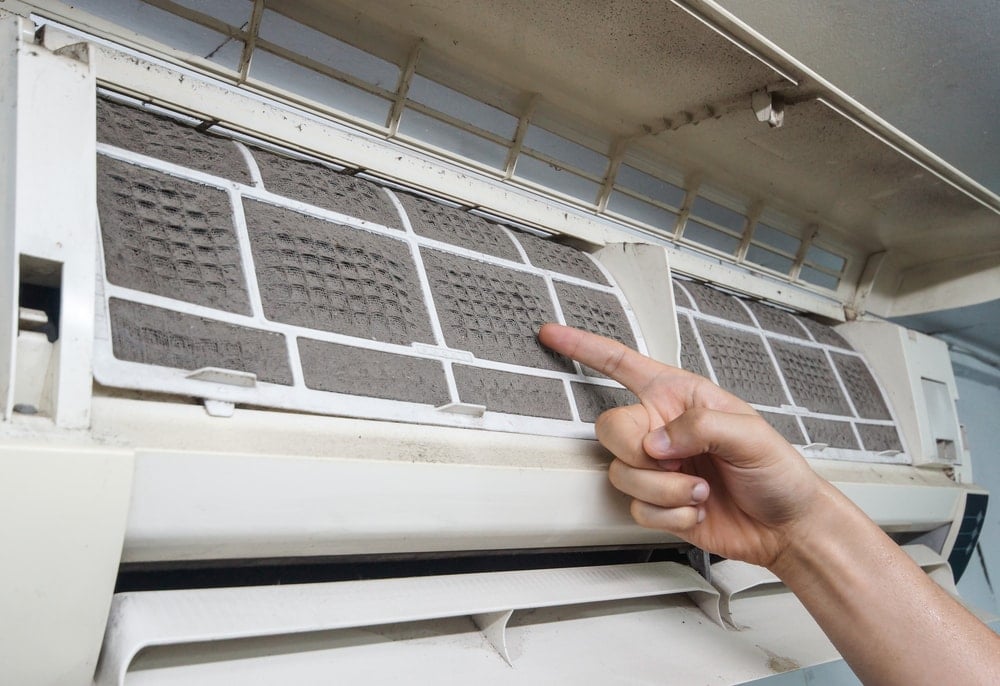 So if the air conditioner circulates germs already lounging around your home, imagine what it does with a dirty filter. If you don’t clean it very often, you can probably smell the dust the second that it powers on.

It doesn’t just spread all the nasty dirt from the outside, it also makes the airflow far less efficient. Which given that you could grill meat on the sidewalks in NYC right now, is a really sucky proposition.

Because excessive buildup on the filters causes the cold air to flow backwards, this means that instead of making the room colder it just makes the coils freeze instead. If the coils go, the unit goes soon enough. Good luck getting anyone to install a new AC unit once it gets to crematorium temperatures outside and the waitlists are longer than they are for affordable housing!

I’m guilty of this, we all are. When I was too tired to do much while feeling sick, I neglected the filter cleaning sign. Sometimes, I can actually clean it then the damn thing lights up again the next day. But whether you make a point to just clean it off every 2-4 weeks or when the light on the unit goes off, remember to clean the filter. It’ll stop you from getting sick and also prevent the unit from combusting. 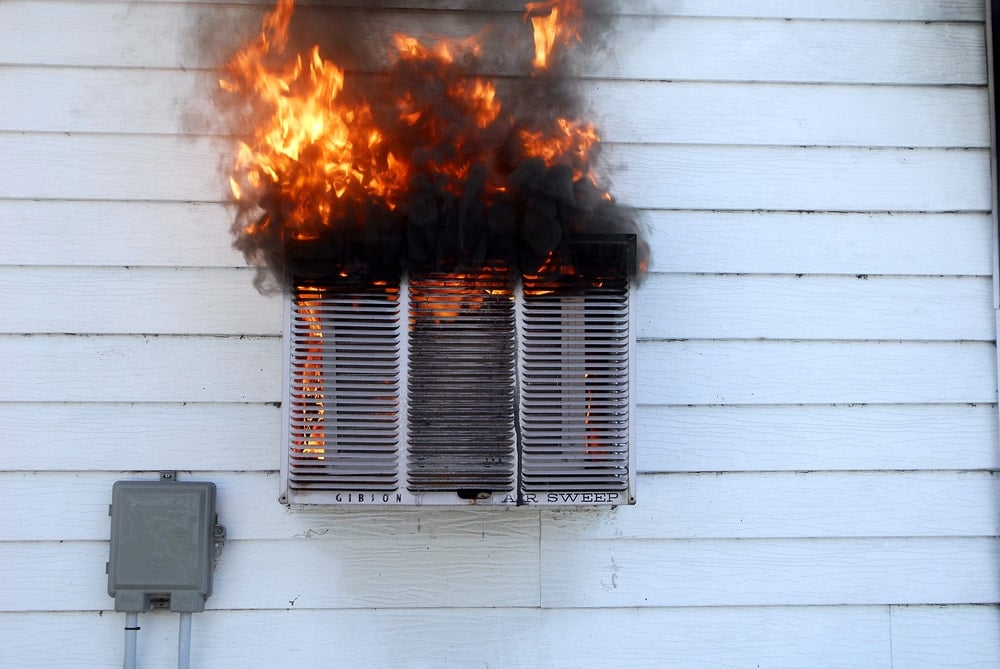 It’s not as high of a likelihood as forgetting to empty the lint trap in the dryer because the latter conducts more heat, but it’s a risk nonetheless.

How to Clean Your AC Filter 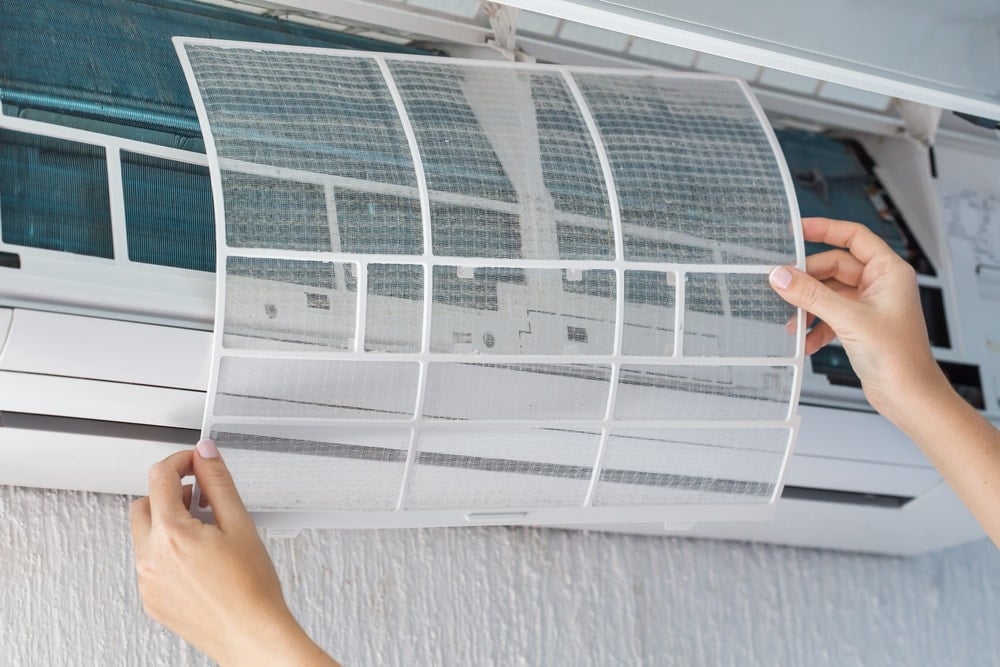 While it can be kinda awkward to clean air conditioner filters, it’s not difficult or impossible. You don’t even need special supplies for this. Just turn the air conditioner off and look for the filter, it’s usually a noticeable plastic tab or there’s a sticker showing you where it is. If all else fails, Google your model number and you should find some old manuals or videos showing you where to look.

Before you run the filter through the sink or bathtub, get a dusting cloth. Don’t use a feather duster because you’re just going to spread that AC runoff everywhere. Get something that’ll suck up that dust, like those Swiffer duster cloths, they’re the shit. Run that puppy through the filter’s place first, then over the sides and bottom of the unit to collect any stray dust.

Then you put the filter under the faucet or in the bathtub and scrub with a washcloth or small towel. I like using microfiber washcloths the best for this, the texture squicks me the fuck out if I dry my hands with it but they’re pretty much meant for cleaning AC filters. Something about the way the pile is laid out on those microfiber towels really makes them efficiently pick up all the dust and dirt that gets trapped in the filter and scrubs it off the material easily.

See also  No, Bunk Beds in a Hostel are Not an Affordable Housing Solution

After you’ve sufficiently scrubbed all the dirt out of the filter, give it another rinse under the faucet then VERY thoroughly dry it off with another towel. Make sure it’s COMPLETELY dry! Putting even a damp filter right back into the unit can cause some not very fun things to happen to the coils. So arrange this for when you plan on stepping out for at least an hour or so, or just not using the unit for a while, so that the filter can dry off on a clean towel or some newspaper, then you can pop it back in.

If the filter is persistently getting dirty and the “check filter” light keeps coming on right after you clean it, it might be a sign to change the filter.

If your filter is looking like the bottom of your shoe, I get it. I have severe executive dysfunction, and this bitch is busy and tired. But while it’s okay to step on that same Stash Tea box over and over again because you don’t have enough room to unload every single box since you never got the memo you have enough tea already, don’t neglect your AC filter. Summertime AC sickness sucks as it is, but you’ll ratchet up your anxiety big time with the ‘rona going around. Scrub it real good with a microfiber towel, let it dry while you go for a walk, then pop it back in and you’re good.

Listen to the interview version and check out Encon on Facebook!