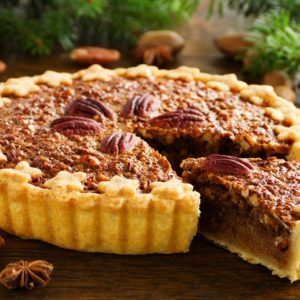 April Freeman
Containing just a few ingredients, this recipe has golden toasted pecans atop the gooey, rich center of the pie, all encased in a homemade pie crust. If you are looking for a surefire dessert to serve tonight, why not give our Classic Pecan Pie a try?
Print Recipe Pin Recipe Add to Collection Go to Collections

Traditionally, before Europeans came to North America, Native Americans cultivated pecans as far north as Illinois. Most of the time, these lovely and useful trees were cultivated in areas near to the Mississippi River. Over time, they gradually were planted as far east as Alabama. After the Civil War, pecan cultivation came to the state of Georgia, which is the state that is currently responsible for most of the pecans grown commercially in the United States. Once pecans were grown and marketed commercially, people began creating recipes to make delicious foods with this tasty nut. The first recipes using pecans were published in the late 1880s. In the early 1900s, Karo brand corn syrup was invented, and that invention is the ingredient that made the Classic Pecan Pie recipe possible. The company sold their syrup in cans that featured the pie recipe on the label and very quickly after that, pecan pie became popular all across the United States. This pie separates while baking into two distinct layers. The pecans rise to the top of the pie, while underneath, a rich, decadent custard mixture is created by the butter, corn syrup, eggs, and remaining ingredients. Pecan Pie is one pie recipe that seems like it should be complicated, but it actually is very simple to create.
Keyword Classic Pecan Pie, Dessert, Recipe