Chicken Pot Pie might call to mind miniature frozen, processed meals in a disposable metal pan, but it doesn't have to be this way. With our recipe for Chicken Pot Pie, you can make your own version of this recipe. We also include a few shortcuts to make it easier. 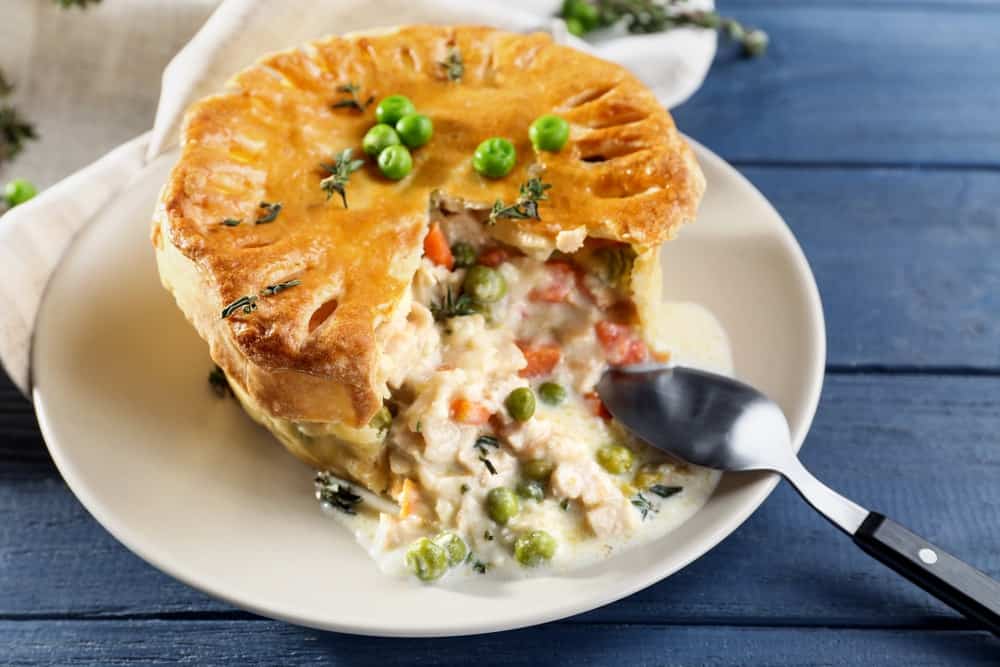 Layers of flaky pastry surrounding large chunks of chicken with nutritious veggies smothered in a savory gravy, it’s no wonder that chicken pot pie is the ultimate in comfort food. This recipe for Chicken Pot Pie is filling and delicious, and it will soon become a favorite for the whole family. 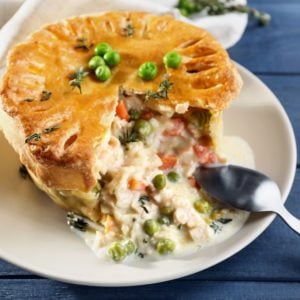 April Freeman
Our recipe for Chicken Pot Pie uses homemade everything. While we do use frozen vegetables, we create the chicken, gravy, and pastry from scratch. If this seems intimidating, don’t worry. We’ll walk you through the steps. However, if that is more than you want to deal with there are a few shortcuts that you can take to make this recipe more simple.
Print Recipe Pin Recipe Add to Collection Go to Collections
Prep Time 45 mins
Baking Time 1 hr
Total Time 1 hr 45 mins
Cuisine Mediterranean
Servings 8 people

While food historians believe that pot pies originated in Greece where cooks filled pastry shells with savory cooked beef, the wealthy of Britain in medieval times resurrected this ancient custom. Large feasts would feature meat pies of many types, such as venison, fowl, or rabbit. Over the centuries, the fad of wrapping meat, seasonings, and gravy in a pastry shell continued until British immigrants took the idea to the New World. From there, colonists continued to refine and alter the humble pot pie until it has now become a ubiquitous part of American culture. Currently, most people consider a pot pie to be something that is purchased from the frozen food department. These processed food items are created in a factory and often are not that tasty or healthy. By learning to make a homemade pot pie, you can serve a family favorite that is both delicious and more nutritious than premade versions. First, you can use premade pastry dough from the dairy department. While learning to make pastry is a skill that most home chefs aspire to, if today is not the day for you to learn pastry making, just buy the dough. Second, gravy making is not hard at all, but it does take a little time. But if you are in a huge rush, just buy a jar of pre-made gravy from the canned goods department. However, don’t skip adding the sour cream. The sour cream adds a delicious tangy twist to the gravy. Third, we poached boneless skinless chicken strips on the stovetop to start this recipe. However, that does add a little time to the prep time. If you’re in a hurry, feel free to use shredded meat from a store-bought rotisserie chicken. This recipe is also a great way to use up a leftover rotisserie chicken from another meal earlier in the week.
Keyword Chicken Pot Pie, Comfort Food, Pastry, Pot Pie