Rich and delicious with a delightfully fluffy meringue on top, our recipe for Chocolate Meringue Pie will soon be a family favorite. It may seem like a difficult recipe to make, but if you take your time and follow our instructions carefully, you definitely can tackle this fabulous dessert.

We include instructions for creating a pie crust from scratch. However, if you don’t feel like rolling out a pie crust or don’t have the time or inclination to mess with it, you can definitely use a store-bought crust from the dairy department of your local grocery store. Simply unfold the crust into your pie pan, bake it, and you will be ready to go.

This recipe for Chocolate Meringue Pie uses a pre-baked pie crust. In general, when a whole pie is baked in the oven, you don’t have to pre-bake the crust. However, when you are creating a pie that has a chilled filling, like this one, the pie crust does need to be baked ahead of time. 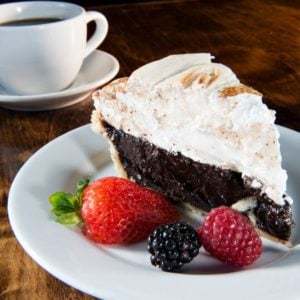 April Freeman
Rich and fudgy and topped with delightfully fluffy meringue, this recipe for Chocolate Meringue Pie will have your guests or your family members raving for the recipe. While this pie tastes and looks like a difficult and time-consuming recipe to create, it actually is fairly simple. The main thing that you need to remember is to take your time and pay attention while you are cooking the pie filling.
Print Recipe Pin Recipe Add to Collection Go to Collections
Prep Time 25 mins
Cook Time 40 mins
Cooling Time 2 hrs
Total Time 3 hrs 5 mins
Cuisine American
Servings 8 Servings

Ingredients for the Chocolate Filling

Ingredients for the Meringue

When you prebake a pie crust, prick the unbaked crust all over with a fork. This will help prevent your crust’s shrinking in the oven. You can add pie weights if you need to. Place the unbaked crust in a preheated oven, and simply bake it until the timer goes off. Meringue is a fluffy concoction of sweetened egg whites. The egg whites are beaten with cream of tartar until they hold their shape in peaks that bend over when you lift the beaters from them. Then you slowly add the sugar to the mixture. The meringue needs to be popped into the oven for about five to ten minutes to set it up. This will give a light toasty brown color to the meringue.
Keyword Chocolate Meringue Pie, Dessert, Recipe