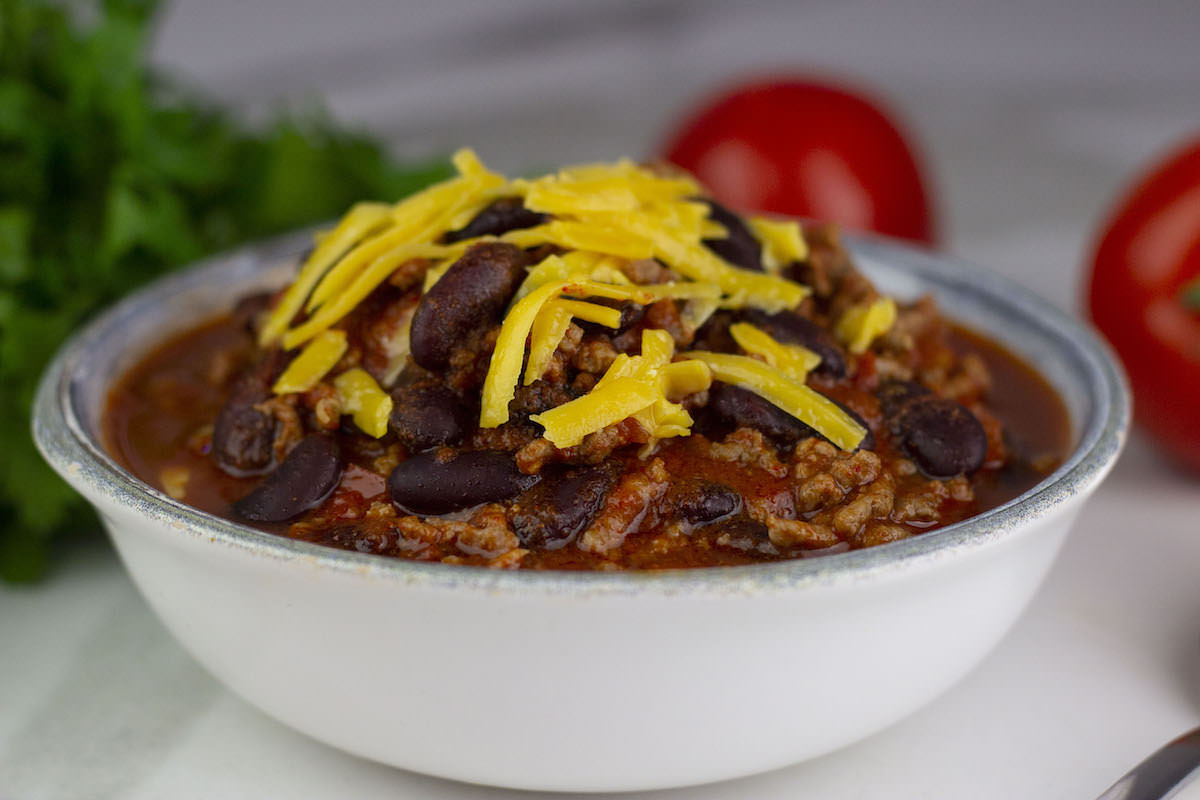 Thick, hearty, and stick to your ribs delicious, who doesn’t need a recipe for a good homemade chili? This recipe for homemade chili is a rather basic recipe. Dress it up with corn chips, sour cream, and cheese and you have a meal that will please everyone. 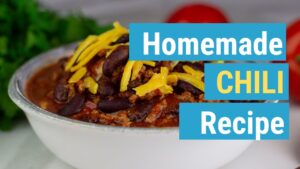 April Freeman
This recipe is begging you to customize it to your own tastes. Of course, you could follow the recipe exactly as written, and if you do that, you will have a good bowl of chili. But the fun of making a pot of chili is that you can change and adapt basic recipes to make it suit your own tastes. Add a can of diced green chilis to up the spiciness, or if you’re really adventurous, throw in a few jalapenos.
Print Recipe Pin Recipe Add to Collection Go to Collections

If you prefer more veggies and less meat in your chili, increase the beans, add chopped bell pepper, and another can of tomatoes. If you love onions, stir a diced, sauteed onion into the beef as you brown it.  If you want a leaner version of this chili recipe you could substitute ground turkey or ground chicken for the beef. The only thing you’ll want to do as you adapt this recipe is to be sure to write down your additions and substitutions. That way, the next time you want to make that chili that tasted so good, you will know exactly which changes that you made to the basic recipe. Chili is a kind of stew that dates back literally centuries. As far back as the 1500s, women in the Aztec capital of Mexico in Central America were cooking stews seasoned with chili peppers. Once the Spanish conquistadors conquered the area and imported beef cattle, they and the natives began making chilis with beef along with the native grown peppers, tomatoes, and beans. Over the centuries, the primary places that chilis were cooked and served were in northern Mexico and southern Texas. Because the ingredients were largely inexpensive, chili was created and consumed by the working class Mexicans and Texans. In the 1893 Columbian Exposition in Chicago, Illinois, some Texans from San Antonio set up a chili stand. This stand gave many Americans their first experience with chili. This hearty stew soon became popular and helped spread the love of chili all across Texas and the Southwest. Did you know that how to make chili can be a controversial concept? Some chili experts take exception to the idea that a good pot of chili should ever include beans. Other people contend that tomatoes are anathema to chili. Vegetarians prefer omitting the meat altogether, and sometimes replace it with meat substitutes, potatoes, or just increase the beans and tomatoes. Chili is one of those meals that you can make hours ahead of time. A long, slow cooking time allows the flavors of the veggies, meat, and seasoning to blend and intensify. Our recipe has a relatively short cooking time at an hour, but if you want to increase it, you may find that a long time improves the flavor. Be sure that you pay attention to the chili, though, if you opt to increase the cooking time. You may want to add additional water to keep the chili from scorching on the bottom. An easy way to give chili that slow-cooked flavor is to just put the ingredients in a slow cooker. Our recipe uses canned beans, so preparation is pretty easy. In the morning, before you leave for work, brown and drain the meat, and pop the remaining ingredients in the slow cooker. Set it to cook all day and when you arrive home from work, the fragrance of spicy, meaty chili will meet you at the door.
Keyword Appetizer, Chili, Recipe

Related: 15 Different Types of Chili | How to Store Chili | What Goes with Chili | Ground Beef Recipes | All Chili Recipes