The definition comfort food, casseroles generally feature shredded, chopped meat mixed with flavorful gravy and sometimes a vegetable, topped with some sort of breading. Our recipe for Chicken Stuffing Bake is a classic casserole that you can make from scratch. Alternately, you can rely on pre-made ingredients.

Every area of the United States has their own version of a casserole. With several kinds of food included in a single dish from which the meal is served, casseroles are favorites both at home and at potluck celebrations. While many consider that casseroles were created in the 1950s, in actuality, casseroles consisting of rice and savory meats cooked together in a single dish have been around for thousands of years. 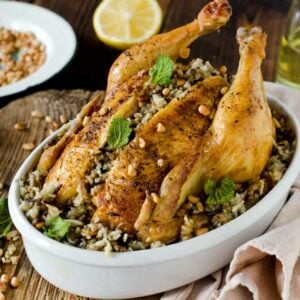 April Freeman
Everyone needs a good collection of casserole recipes for nights when it’s just family at home. These recipes typically include meat and maybe a vegetable, smothered in some sort of sauce and usually topped with a bread of some kind. Our recipe for Chicken Stuffing Bake follows this pattern. With shredded chicken and a creamy sauce, topped with stuffing, this recipe is comfort food all the way.
Print Recipe Pin Recipe Add to Collection Go to Collections
Prep Time 25 mins
Baking Time 25 mins
Total Time 50 mins
Cuisine American
Servings 6 Servings

Around the 1870s, casserole cooking started to adapt to become the form that we would recognize as such. Named for the dish in which it is cooked, this style of cooking puts several courses together in a single dish.  Whether you bake it in a metal pan, a ceramic casserole dish, or a glass baking dish, casseroles are tasty, delicious, and appealing to almost everyone. In the 1950s, the casserole became ubiquitous, since new cookware became available that was easy to care for and much more lightweight. Other societal changes of the 1940s and 950s also influenced the development of casseroles as popular food choices. When women began entering the workforce in greater numbers in the World War II era, they needed recipes and cooking styles that made sense for their new lifestyles. Casseroles answered that need. Additionally, in the 1950s and 1960s, a greater reliance on manufactured food products came about that made casseroles incredibly easy to make, such as canned soups and frozen vegetables.  Our recipe for Chicken Stuffing Bake does rely on a boxed mix for the stuffing topping. However, if you have leftovers from a holiday meal or wish to make homemade stuffing from scratch, feel free to make that substitution. We also provide a recipe for a creamy, chicken broth based gravy with herbs to jazz up the flavor profile of this dish. If you need a shortcut to make this recipe quicker to get on the table, you can substitute three cans of cream of chicken soup for the gravy mixture. You may want to thin the canned soups with the addition of some chicken broth, milk, or water to make them more sauce-like.
Keyword Chicken Stuffing Bake, Recipe, Side Dish