Jambalaya is a Louisiana dish that features meat, rice, veggies and seasonings. Two main versions exist, Cajun and Creole. This recipe for a Creole Jambalaya includes delicious tomatoes, smoked, meat, peppers, celery, and chicken along with fragrant spices. It will provide a hearty dinner that the whole family will love. 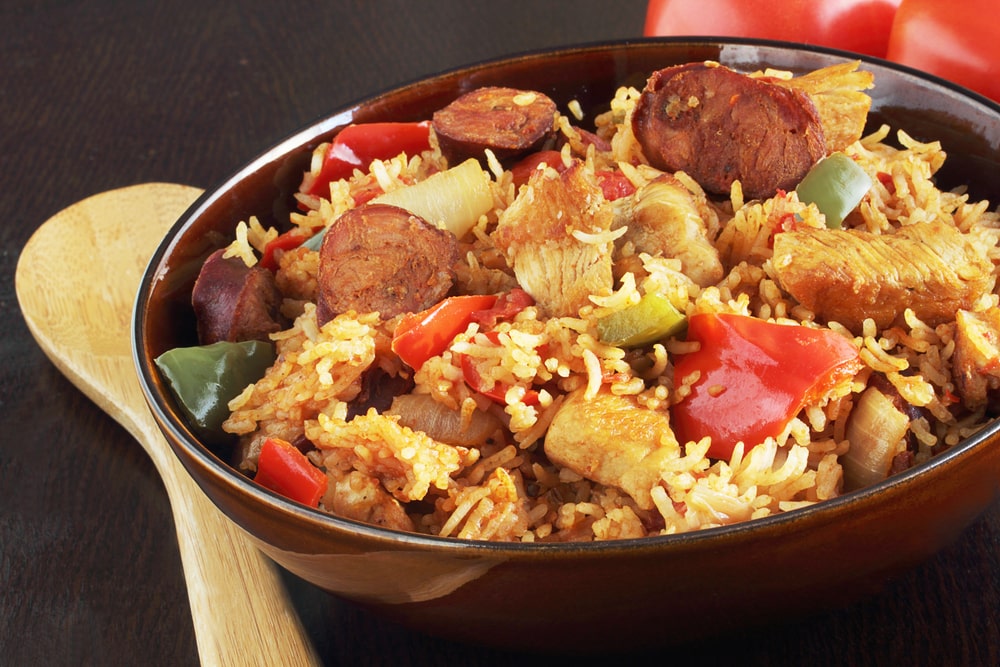 A New Orleans favorite that features several different kinds of meat, delicious seasonings, and tangy tomatoes, Jambalaya is a meal that visitors to this city must try. While this dish may seem as if it will take plenty of time and effort, it is surprisingly simple to make. In fact, most of the preparation time will involve chopping your vegetables.

There are as many variations of Jambalaya as there are cooks in Louisiana. Some people prefer to use ham rather than smoked sausage, and others like to add a little seafood twist by stirring in some shrimp. 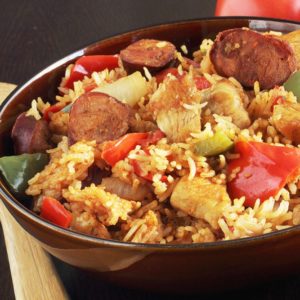 April Freeman
No matter what, Jambalaya often includes the tangy flavor of tomatoes, the richness of smoked meat, and the flavors of herbs and peppers. This recipe can be easily adapted for whatever herbs and seasonings you have on hand. If you like a little heat in your Jambalaya, add a quarter teaspoon of crushed red pepper.
Print Recipe Pin Recipe Add to Collection Go to Collections

Did you know that there are two versions of authentic Louisiana Jambalaya? The two versions are called Creole Jambalaya and Cajun Jambalaya. The main difference is that the Creole Jambalaya, which originated in and around New Orleans, includes tomatoes. The Cajun version of Jambalaya, coming from Louisiana’s “swamp country” does not include tomatoes, and it may include a wider variety of meats. Historically, the Cajuns might add turkey, alligator, or other unusual meats to their Jambalaya, depending on what was available. The Cajun version of this dish has a more smoky flavor than the New Orleans style dish. Our recipe would be considered Creole Jambalaya because it includes tomatoes and tomato sauce. There are countless versions of this recipe, but no matter what you end up throwing in the pot, an authentic Jambalaya includes meat, rice, vegetables, and spices. Jambalaya was invented by Spanish people who lived in New Orleans in the 1700s. They were attempting to recreate paella in the French Quarter of the city. Of course, many of the authentically Spanish ingredients were unavailable, and like good cooks everywhere, they simply made substitutions with locally available ingredients. These substitutions ended up creating a whole new dish, one that reflected the unique taste and culture of the “Big Easy.”
Keyword Chicken Jambalaya, Main Course, Recipe