Our recipe for Chicken and Cornbread Casserole is a tasty and interesting variation on the classic casserole. With juicy chicken smothered in a scrumptious gravy along with a veggie and topped with a moist and tender cornbread topping, this recipe can easily be adapted to suit the tastes of your family and the time that you have available.

Our recipe starts with cooking boneless, skinless chicken. We provide instructions for poaching the chicken, but if you are in a rush you can use canned chicken that you have drained of the liquid. Alternatively, if you like to cook ahead, you can cook and shred the chicken several days ahead of time, storing the chicken in a tightly covered container in the fridge. 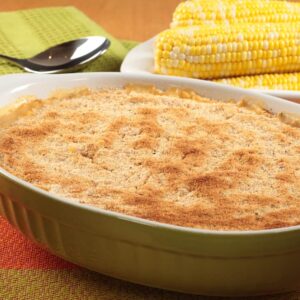 April Freeman
Whether you make them with chicken, beef, or tuna, casseroles are a staple of many family meals. They generally consist of meat that is smothered in sauce or gravy and combined with a vegetable. Usually, they are topped with starch of some kind. This can be a biscuit topping, bread of some sort, or even mashed potatoes.
Print Recipe Pin Recipe Add to Collection Go to Collections
Prep Time 35 mins
Baking Time 35 mins
Total Time 1 hr 10 mins
Cuisine American
Servings 6 Servings

Some thoughtful cooks freeze several pounds of cooked and shredded chicken breasts once a month, so they can easily thaw chicken on days that they don’t have much time to cook.  Next, you will make a delicious sauce from scratch. If you have typically relied on cream of whatever soup for your casseroles, this is a great way to step away from premade, canned sauces. However, if you don’t want to try making a sauce from scratch, that’s fine too. Simply substitute two cans of cream of chicken soup for the sauce in the recipe. You may have to thin the soup a bit with chicken broth. We used drained canned corn in our recipe. However, the great thing about this casserole is that you can use whatever kind of veggies that you have on hand. If you have frozen veggies that you need to use up, feel free to cook them according to the package instructions, draining them well before you add them to the chicken. You can use any variety of veggies that you like. Green beans, sweet peas, or even frozen broccoli would be delicious additions to this recipe. We provide a “from scratch” recipe for the cornbread topping. However, if you really don’t want to mess with making cornbread from scratch, you can use a boxed cornbread mix. Just follow the instructions on the package for stirring it up with whatever ingredients that it calls for. Then, spread it over the top of the chicken, sauce, and veggies in the pan.
Keyword Chicken and Cornbread Casserole, Dinner, Recipe