Cherry pie is cheerful, tasty, and fun to make. Our recipe for cherry pie uses tart cherries for complex taste. You can use frozen cherries to get all of the flavor of fresh cherries with none of the work. 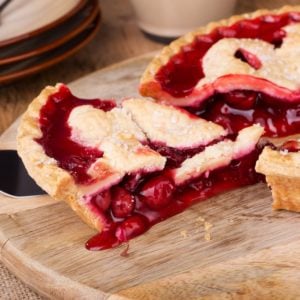 April Freeman
Cherry pie is created in the same basic way that other fruit pies like blueberry and apple pies. You can follow the instructions below to make a pie crust from scratch. However, if you don’t want to take the time to do so, feel free to use a refrigerated pie crust from your grocers dairy case. With these crusts, you simply place them in the pan, add the filling and top crust, flute the edges, cut vents on top, and bake. Refrigerated pie crusts are an excellent shortcut for bakers who are in a hurry. Between the use of frozen pitted cherries and a refrigerated pie crust, you can probably have this pie in the oven in less than ten minutes.
Print Recipe Pin Recipe Add to Collection Go to Collections
Prep Time 20 mins
Baking Time 1 hr
Total Time 1 hr 20 mins
Cuisine American
Servings 10 people

While apple pie is a favorite of many, cherry pie is often a close second. Featuring cheerful red cherries encased in a pastry crust, cherry pie is probably one of the prettiest pies that you may put on the table. Some people may only have experience with cherry pies that include canned cherry pie filling. While some may like it, canned pie filling often tastes metallic, overly sweet, and may have a somewhat slimy texture. Our recipe for the cherry pie is nothing at all like those kinds of cherry pies. The flavor of tart cherries gives our pie a tart sweetness and the filling feels like fresh fruit in the mouth. Of course, you can make a cherry pie with fresh cherries from the store when they are in season in the summer months. However, fresh cherries can be a little bit of a nuisance. You not only have to clean them and pull off the stems, but you also have to pit every one of the cherries before you can put them in a pie. Even with a tool called a cherry pitter, this procedure can be tedious, time-consuming, and boring. Our recipe for cherry pie gives you all the flavor of fresh cherries with none of the hassles by using frozen, pitted cherries. The cherries come to you ready to be used. You don’t even have to thaw them before you incorporate them into the pie. When you buy your frozen cherries, be sure that you choose tart cherries. Even if you don’t care for sour things, the tart cherry is perfect for this pie. When you use tart cherries, the flavor of the pie becomes much more complex. These cherries have a bold, fruity flavor that makes the dessert taste amazing. While cherries taste great, they also have plentiful nutritional benefits. Tart cherries in particular have high levels of antioxidants which can help with the prevention of cancers and heart disease. Some studies have shown that those who drink the juice of tart cherries have relief of pain related to gout and arthritis. Other people have reported the relief of their headache pain and insomnia simply by drinking tart cherry juice.
Keyword Apple Pie, Berry Cream Cheese Pie, Cherry, Cherry Pie, Recipe

See More RecipesClick Here for All Our Recipes
34 shares