Loaded with vitamin C and many other antioxidants, cranberries are delicious as well as nutritious. While many think that cranberry sauce should be limited to holiday dinners, but why should that be the case? Our recipe for Cherry Cranberry Sauce is so good, it should be enjoyed all year round. 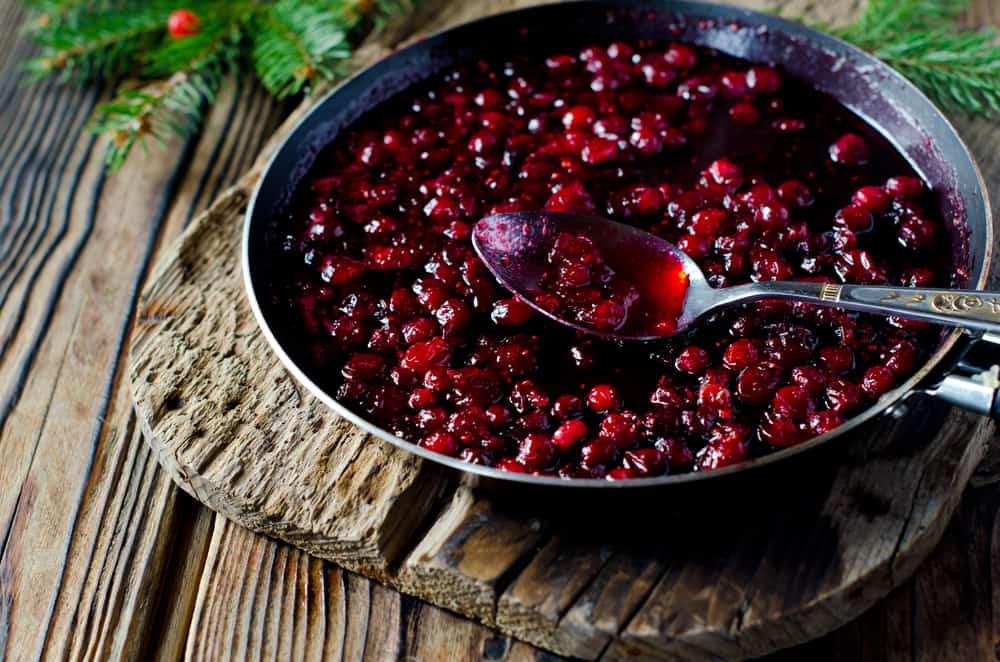 This recipe includes dried cherries which adds an additional layer of flavor and texture to the final product. The cherries are initially soaked in a cranberry juice cocktail and warmed to be re-hydrated before the cranberries are added.

The cranberries are then heated until they pop, releasing delicious juice into the sauce. Cranberries have a natural level of pectin in them, a chemical that helps the sauce firm up in refrigeration. Because of this pectin, this sauce will thicken as it cools. 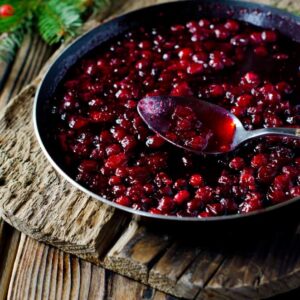 April Freeman
If you think that cranberry sauce is a cylindrical gelatinous mass that is shaped with the grooves of the can from which it came, you have no idea what you have been missing all of these years. Real cranberry sauce features delicious, fruity, cranberries in a jelly-like sauce. Our recipe for Cherry Cranberry Sauce is tart and sweet and a cheerful red color, a perfect accompaniment for traditional roast turkey or other kinds of meat.
Print Recipe Pin Recipe Add to Collection Go to Collections
Prep Time 25 mins
Refrigeration Time 2 hrs
Total Time 2 hrs 25 mins
Cuisine American
Servings 8 Servings

Most people believe that cranberry sauce should be reserved for holiday dinners like Thanksgiving and Christmas. And while this dish is good for those special holidays, there is no reason that you can’t enjoy our recipe for Cherry Cranberry Sauce all year round. It is perfect to serve as a side dish with any poultry main dish. Additionally, it tastes fantastic along with the savory flavors of a pot roast. This Cherry Cranberry Sauce recipe is so good that there is no reason to limit it to the months of November and December. One of the fruits that are native to North America, cranberries were an essential part of the diets of Native American tribes in the Northeastern portion of the continent. The tribes in New Jersey called these colorful little fruits “ibimi” which meant “bitter berry”. The European immigrants that spoke German named this fruit the “crane berry” due to the fact that the flower of the plant on which the fruits grew resembled a crane. Later on, the name was changed to cranberry. With high levels of vitamin C, cranberries were carried on ships that went on long sea voyages to prevent scurvy, a disease caused by a lack of this vitamin. Cranberries also have natural antibacterial properties, and for this reason, they can help reduce the buildup of plaque on the teeth and gum disease. Additionally, the antibacterial qualities of the berry were the reason that Native American tribes used cranberries in treating cuts and wounds. They also made it into pemmican, a mixture of crushed cranberries and deer meat. The antibacterial qualities of the berries kept the meat from spoiling very quickly. Cranberries prefer loose, sandy soils and cool climates. For this reason, they are generally grown in places like Wisconsin, Massachusetts, Washington State, New Jersey, and Oregon. Wisconsin produces more cranberries than any other state in the United States, with Massachusetts coming in at number 2 in cranberry production. While many people have seen the flooded fields of cranberries, did you know that cranberries are not grown in water? They grow in specially constructed beds called bogs, but the bogs don’t usually have water in them. The flooding of the bog happens at harvest time. The commercial grower will pump water into the bog and a mechanical gadget will beat the water, dislodging the berries from the plants. The berries float to the top of the water and are then gathered for packaging.
Keyword Cherry Cranberry Sauce, Recipe, Side Dish