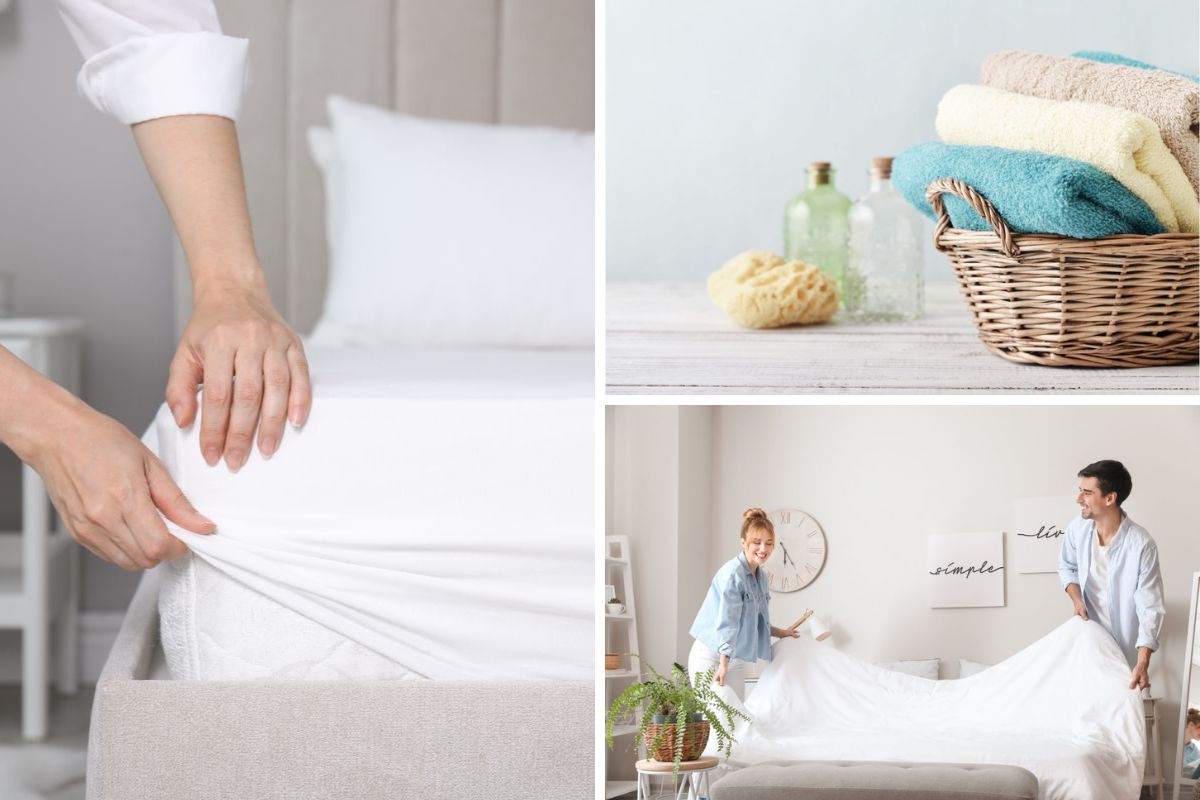 There are several reasons sheets and towels can’t be washed together, and we’ll tell you all of them. Perhaps the biggest reason is that this practice isn’t good for your health.

Too many people nowadays work two to three jobs to make ends meet, leaving little time to complete ordinary chores at home. As a result, folks just shove clothing, sheets, towels, and sneakers into the washer and dryer and call it a day. We get it.

Saving time is important, but saving the integrity of the fabrics you’re washing is more important. Saving your health is definitely more important. Grab a coffee while I tell you why you should begin washing your sheets and towels separately.

Sheets And Towels Are Classified As Linen. They Should Be Laundered Together, Right? 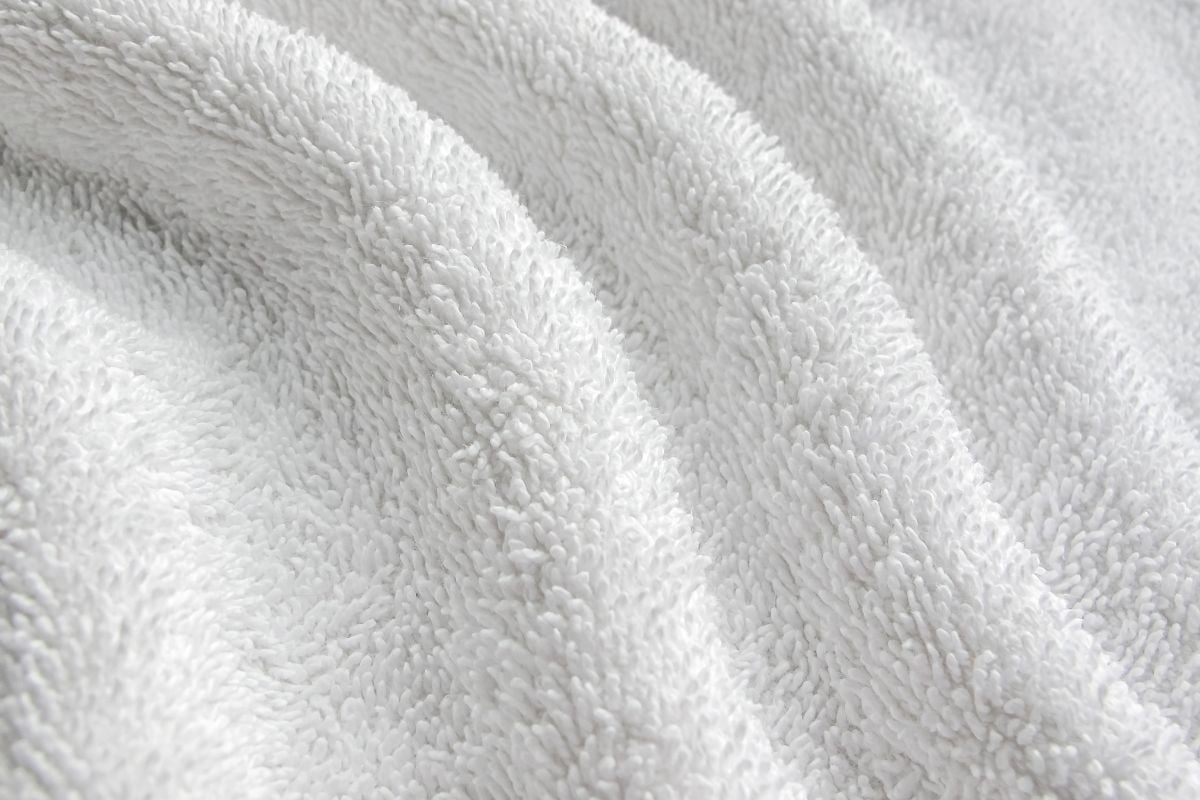 No. Let’s Start With Towels

Everyone is familiar with the nubby texture of a cotton towel. Everyone is aware of the lint left behind by a towel. Anyone who has ever hung a bath towel or bath sheet over a shower curtain rod to dry knows it takes all day for a towel to dry. Thickness isn’t the only thing, though:

• Germs and bacteria on moist items can cause severe health problems including respiratory problems. The humidity in a bathroom is a prime breeding place for these pathogens. Wash towels separately in hot water to kill these and prevent them from getting on clothing or sheets.

• Towels wrap themselves around other items in the washer and dryer, preventing both from getting truly clean.

• Towels are thicker and take longer to dry. If they’re mixed with sheets, the sheets will dry quicker. Keeping sheets with towels damages the fabric of the sheets, thus shortening their lives.

Next, We’ll Segue Into Washing Sheets 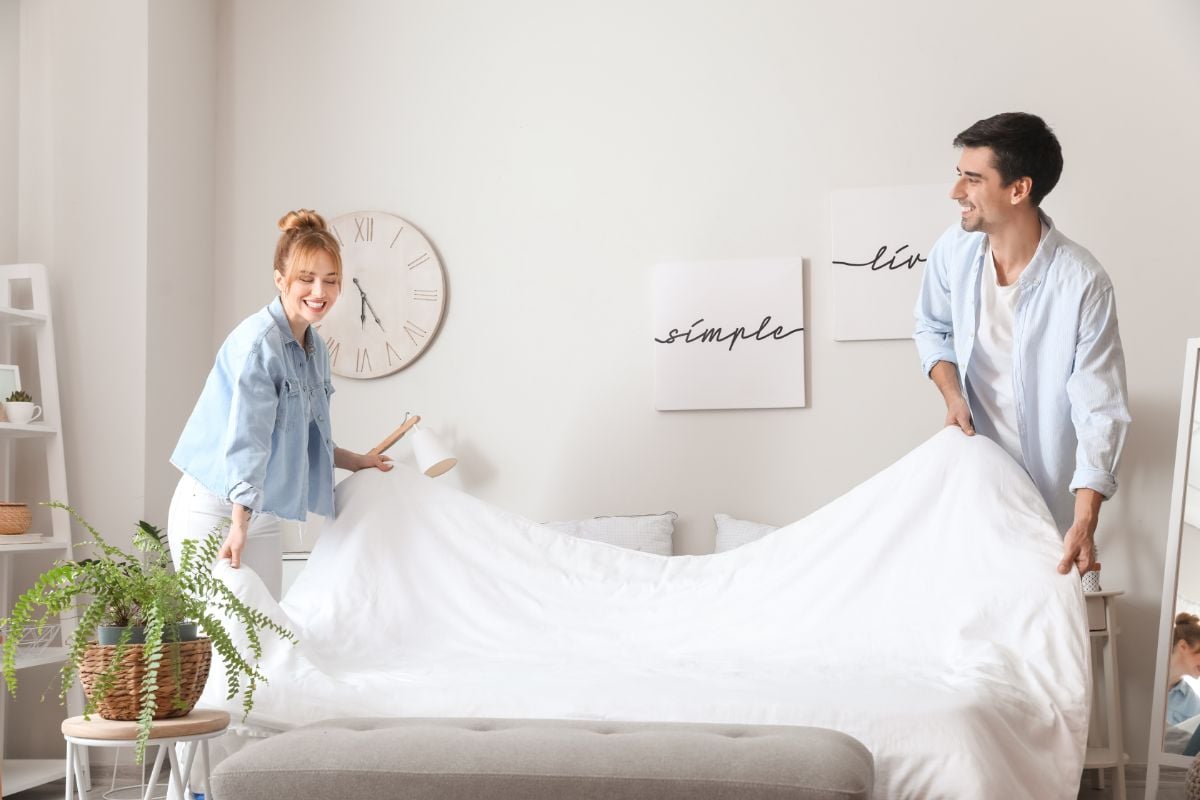 The naked body doesn’t often encounter bedsheets. However, sweat, body oils, dead skin cells, dust, and pet dander are just a few of the things with which sheets come into contact. You wash all of this off in the shower, but you’ll climb right into bed and get them all over you again.

Sheets should be washed every week to avoid illnesses (like asthma or allergies) from your sheets. If you don’t have the time, then every two weeks is okay. Just make sure to launder your sheets with some regularity to avoid illness.

Hot water helps to break down the fibers in the textile, which shortens its life. If you’ve been sick, then wash your sheets in hot water to kill the germs and bacteria.

When you take a twisted mass of fabric out of the washer, tossing it in the dryer will cost you. The twists aren’t going to work themselves out in the dryer. It will take longer to dry the linens, which wouldn’t have taken as long had they been separated.

The sheets are going to wrap themselves up in the fitted sheet pockets anyway. You’ll have to keep an eye on them to untangle them. However, they’re thinner and won’t take that long to dry.

Towels won’t get tangled up in the dryer. It will still take a while to dry due to the weight and thickness of the fabric, but one good 45-minute cycle should do it.

What this means to your power bill is shorter dry cycles. Dryers use a lot of electricity, so do your checkbook a favor and dry your linens separately. 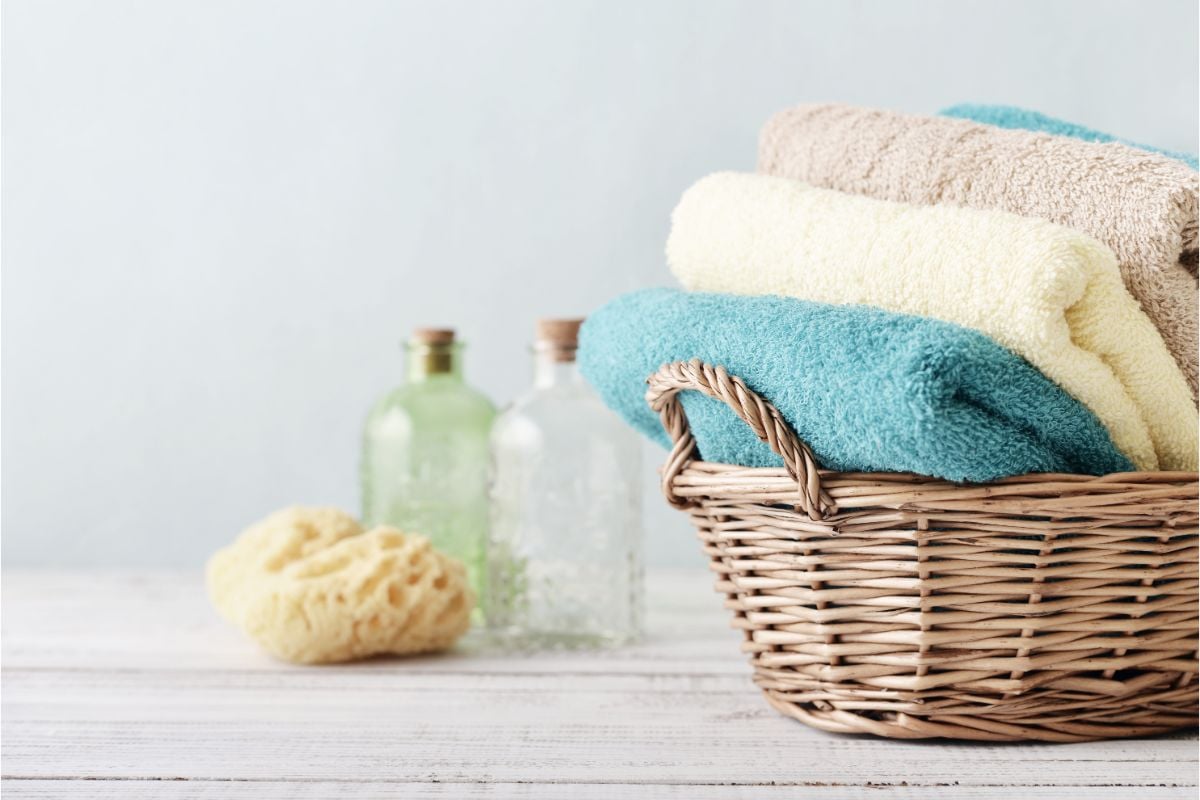 • Make a note on your calendar, because May 25 is National Towel Day. The item was invented in the 1600s in Turkey. It was originally used in a pre-wedding ritual bath for the bride, which is where using towels after a bath or shower originated.

• In the beginning, the loops we call terry today began in Turkish carpet weaving. Only the wealthy could afford these carpets, so it stands to reason that towels that were used in the Turkish baths could only be used by the wealthy.

I’ll Bet There Are Some Interesting Facts About Sheets, Too 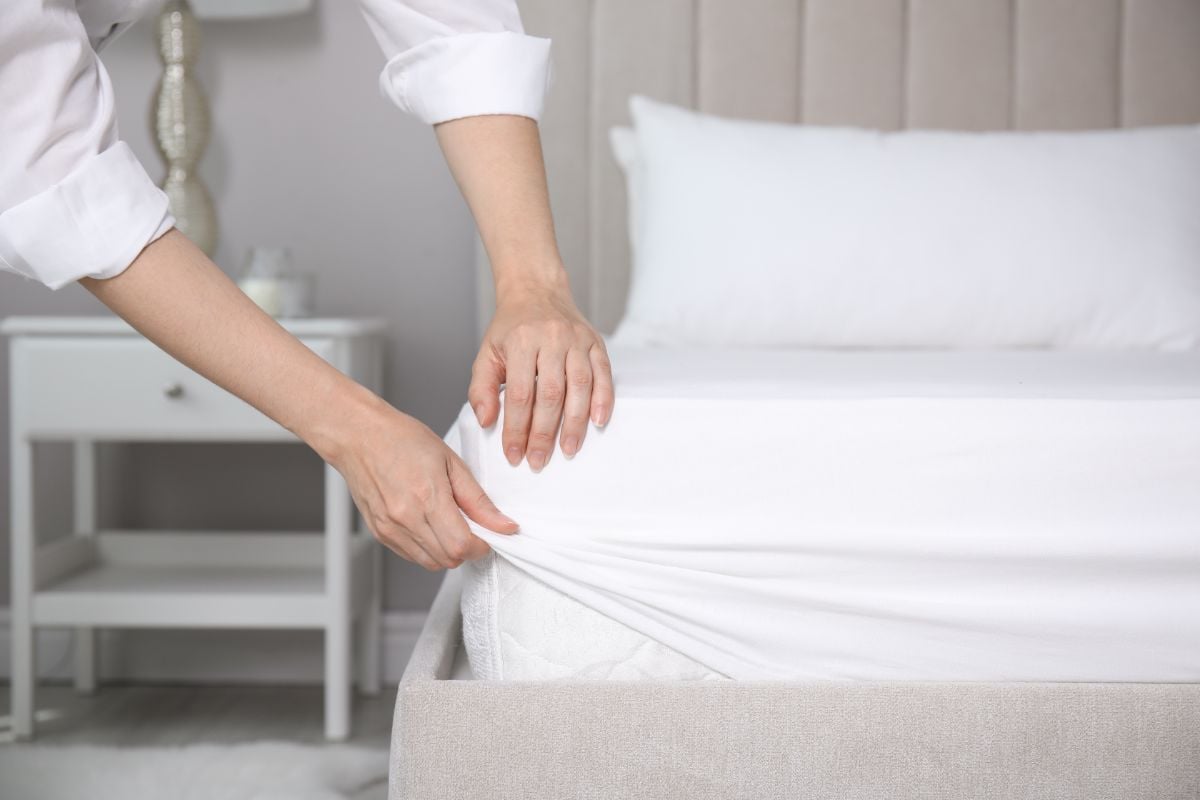 You’d be correct. A good night’s sleep is so important. During sleep, the body deletes the days’ information, files it away for future reference, and sets the body up for the new days’ information. When the body doesn’t get enough or quality sleep, this process short-circuits. The body is sluggish, the mind is slow, and no amount of caffeine perks us up.

• When you’re buying a high thread-count set of sheets you’ve been told is highly desirable, think twice. It’s the length of the thread that makes quality sheets, not the number of them. Seek out long-strand cotton because it’s better and will last longer.

• Take your sheets out of the dryer when they’re just the tiniest bit damp. Make your bed with them, and they’ll be wrinkle-free. Do. Not. Buy. Sheets that are labeled “wrinkle-free,” or “permanent press.” They’re pre-treated with formaldehyde that doesn’t wash out.

• Making your bed every morning prevents dust mites from getting on the sheets and pillows.

Tips And Hacks For Washing Sheets And Towels

Have you ever wondered how hotels get their bath towels so soft and fluffy? Why are their sheets cooler and more restful than ours at home? These tips and hacks might tell you why.

How To Get Hotel-Soft And Fluffy Towels 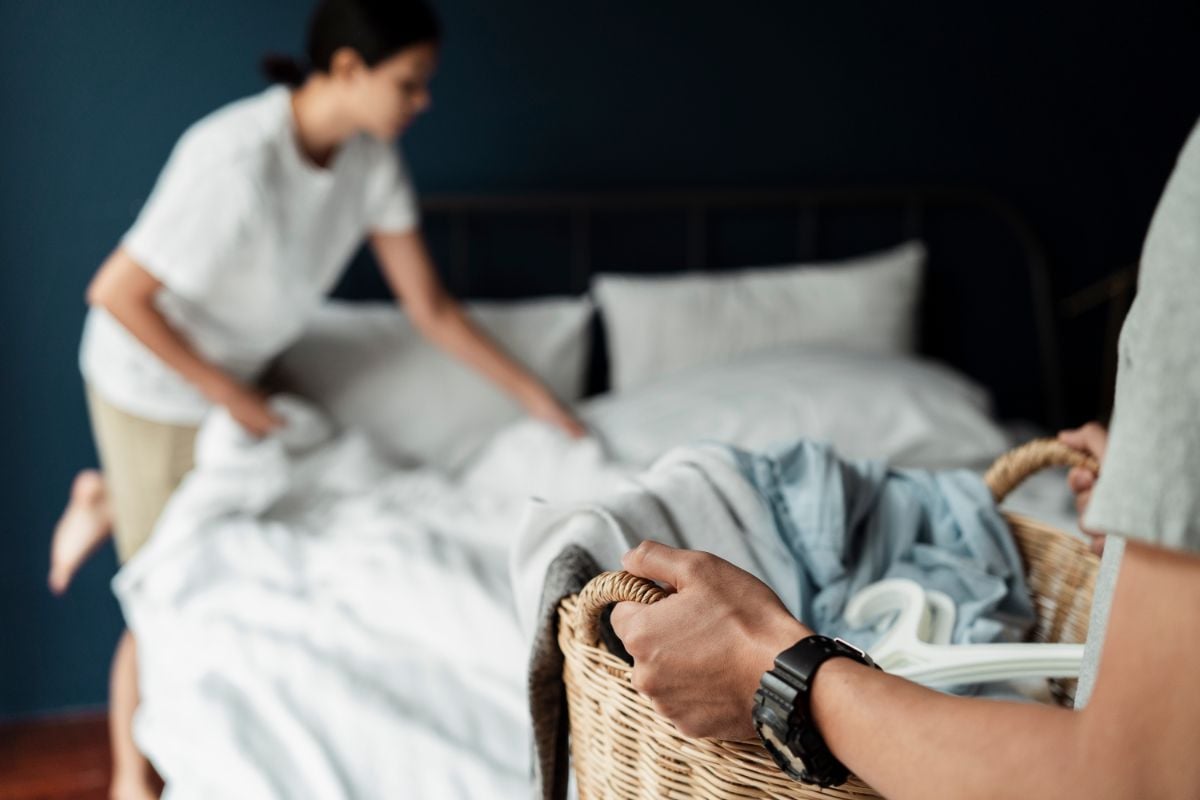 Add a cup of baking soda to your detergent when you wash your towels. The build-up of soap in the fibers of the towels doesn’t wash out, so your towels get dull and rough. The baking soda dissolves all that built-up soap. Adding fabric softener helps.

How Hotels Keep Their Sheets And Towels So White

Repeated laundering will turn anything dull and gray(ish.) Using white sheets and towels doubles the risk. Hotels use detergents that include peroxide. Bleach is added to the mix, too, but it takes training to get it right.

Adding Vinegar To The Sheets And Towels Is A Good Idea

Sweat, body oils, not bathing in a couple of days and more will leave odors on your sheets and towels. Adding a cup of white vinegar to the last rinse will alleviate these odors. Be mindful of not adding it too often; it can warp the rubber seals in the machine and cause leaks.

We know it’s a lot of work. We know most people wouldn’t think of it. However, five-star hotel sheets are starched and ironed after each wash. If you want a good, quality night’s sleep just like you’d get in a hotel, then that’s how to do it.

Can You Wash Towels With Sheets FAQ 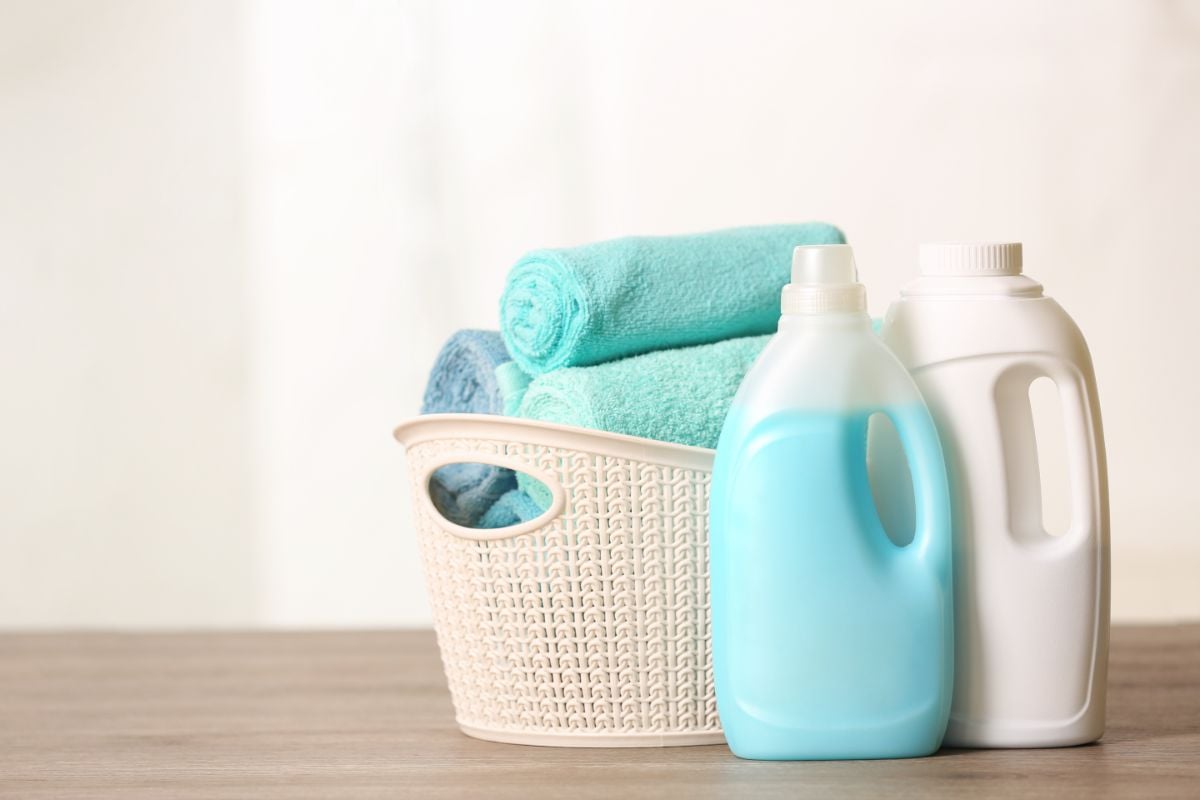 Separate the colors so the white towels don’t become spotted. Wash them in hot water. Do not use bleach on colored towels. Only use the recommended amount of washing soap. Dry the towels on low heat to avoid damaging the fibers from high heat.

Should Sheets Be Washed In Cold Water?

Absolutely not. Sheets should be washed in hot water in order to kill any signs of bacteria or germs from an illness.

Why Do Sheets Yellow?

Any sheet will be yellow from body oils, sweat, and other bodily fluids. It’s no reflection of your cleanliness. The body does what it does and you can’t control that. Wash your sheets once a week, and that should do it.

What Will Keep Sheets White? 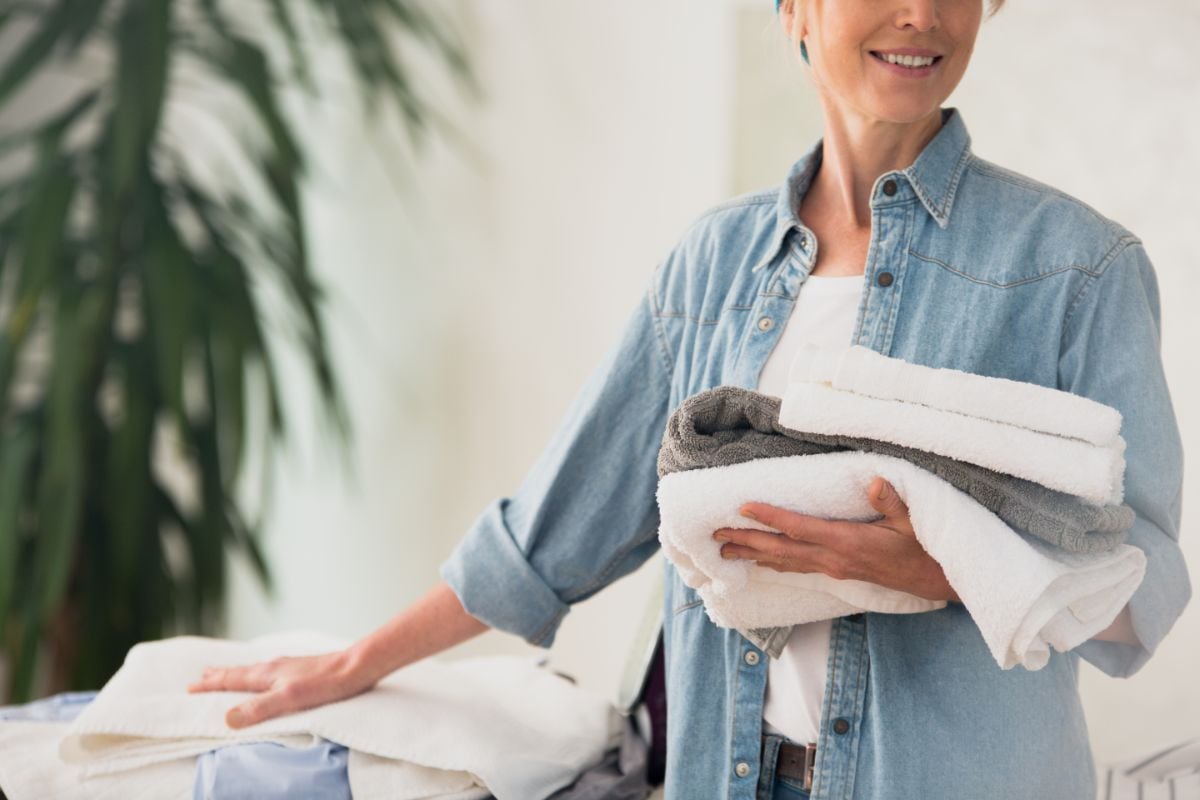 Adding white vinegar and baking soda to your wash cycle will keep the white sheets white. These are natural alternatives to bleach and do a lovely job.

Why Aren’t Dryer Sheets Good For Sheets And Towels?

Dryer sheets contain chemicals that coat your sheets and towels (and clothes!) This doesn’t make them any softer and may cause health problems, especially for those with asthma and allergies. Instead of dryer sheets, take a baby washcloth or an old sock and put several drops of the essential oil of your choice in, and toss it in the dryer. Dryer balls work well, too.

How Can I Eliminate That Musty Or Sour Smell From Sheets And Towels?

Using half the recommended amount of washing soap, pour a cup of white vinegar into the wash during the rinse cycle. This will not only strip the soapy build-up from the fibers but wash away that musty, sour smell.

Why Do Towels Go Hard After Laundering?

The build-up of washing soap in the fibers hardens towels. Drying them for too long does the same thing. Using white vinegar in the rinse cycle and drying the towels just long enough will prevent the hardening of the cloth.