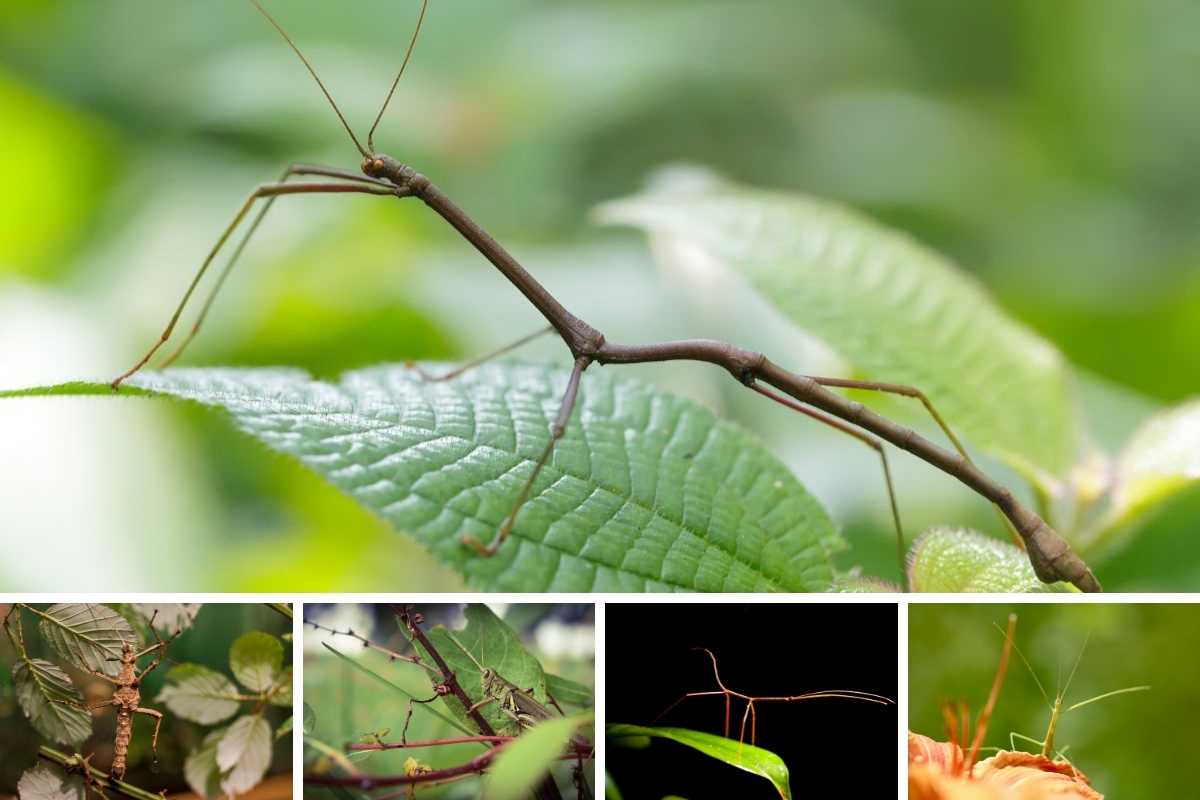 Most of us have encountered stick insects before. These unique bugs have perfected the art of camouflage, seamlessly blending in with their surroundings to escape from predators. But scientists have actually observed hundreds, if not thousands, of these insect species!

Phasmatodea, or phasmids, live all over the world and range from tiny to several feet long. Here are some of the most fascinating bugs that look like sticks!

Table of Contents Show
1. Prickly on the Outside, Friendly on the Inside
2. A Powerful Name for a Powerful Insect
3. Watch Your Fingers!
4. Now That’s What I Call Color
5. An Insect Who Likes to Fish
6. Why So Serious?
7. Not Quite Like Greek Mythology
8. Leaf Bug, Stick Bug, What’s the Difference?

1. Prickly on the Outside, Friendly on the Inside 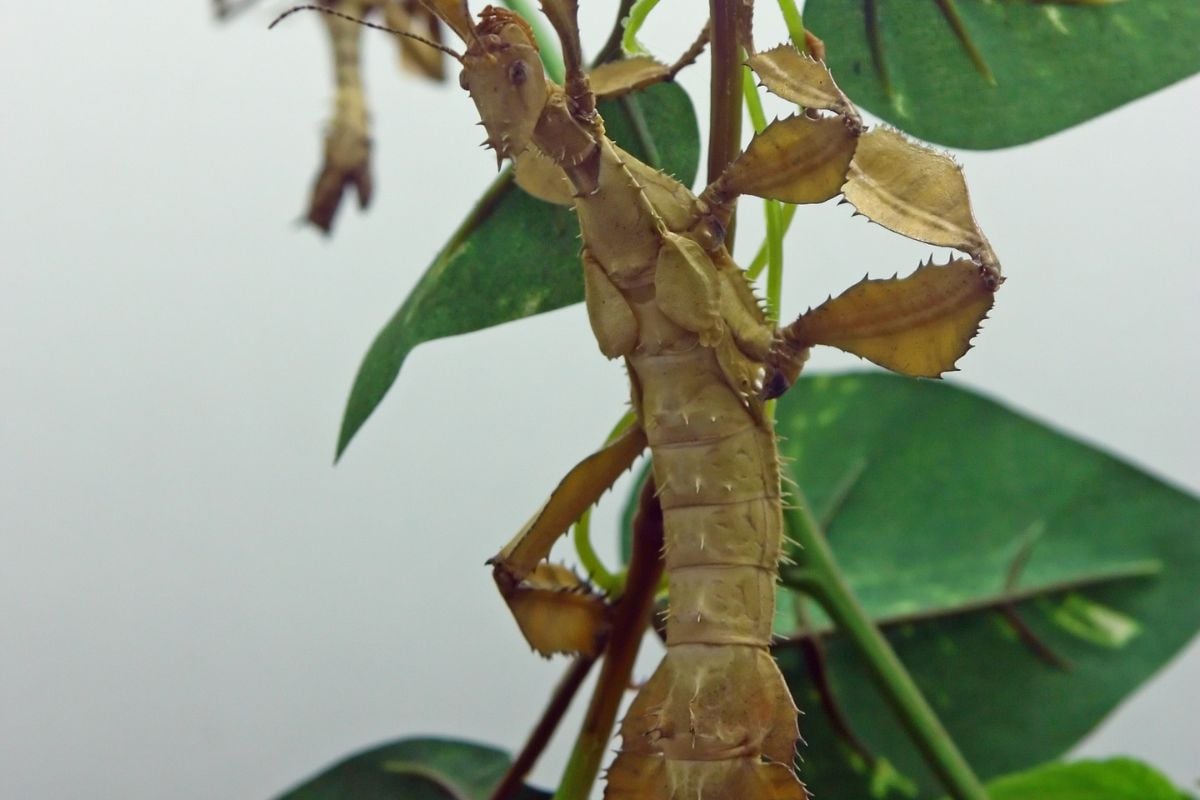 The giant prickly stick insect is a large stick insect species native to Australia. It is also known as the Australian walking stick, the spiny leaf insect, and Macleay’s specter. It ranges as far as New Guinea but is most commonly found in New South Wales and Queensland.

This species has similar sexual dimorphism to other related insects. Male giant prickly stick insects are smaller, thinner, and lack most of the thorny spikes that females have. They top out at 11 cm and have long wings that are suitable for flight.

Male prickly stick insects commonly take flight when near females or in any way disturbed. Mature female E. tiaratum have thorny spines along their bodies for both camouflage and deterring predators. Female specimens have heavier, longer, more rounded bodies and can grow up to 20 cm.

They boast a dense tuft of spines on the head. While the giant prickly stick insect has wings, females’ wings are too small for flight. E. tiaratum are herbivorous.

In their wild habitats, these insects consume mostly Eucalyptus. Still, they can be fed in captivity with a wide variety of greenery. They thrive on bramble, hazel, oak, bayberry, hawthorn, raspberry, guava, and rose.

Their relative ease of care makes them a popular terrarium specimen.

2. A Powerful Name for a Powerful Insect 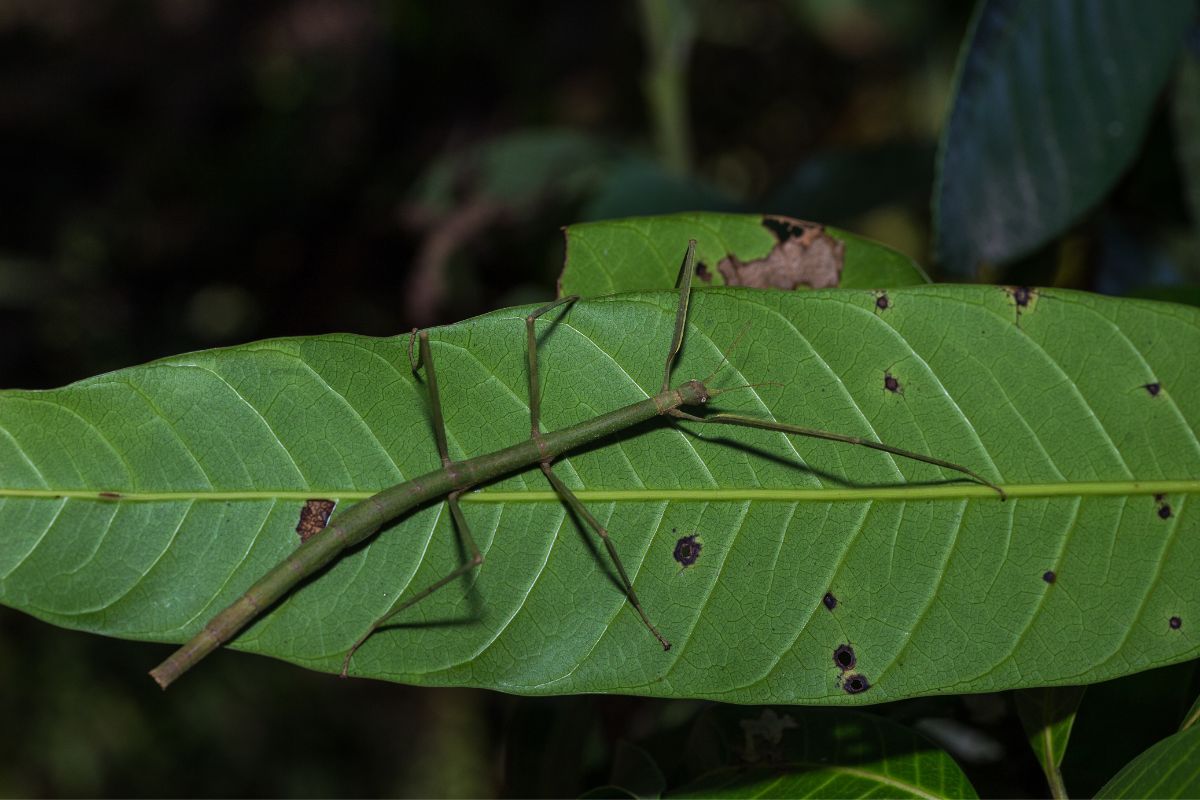 Chan’s megastick is a stick insect species once considered the longest insect in the world. It is named for amateur naturalist Datuk Chan Chew Lun who observed it. Even now, while no longer the record holder, it is still a top contender.

(The current longest observed insect species is an unnamed Phyrganistria that was found in 2016.) A particular specimen at London’s Natural History Museum is 22.3 inches long (567 mm) with the front legs fully extended. Without its legs, the insect’s body is still a whopping 14.1 inches (357 mm) long. 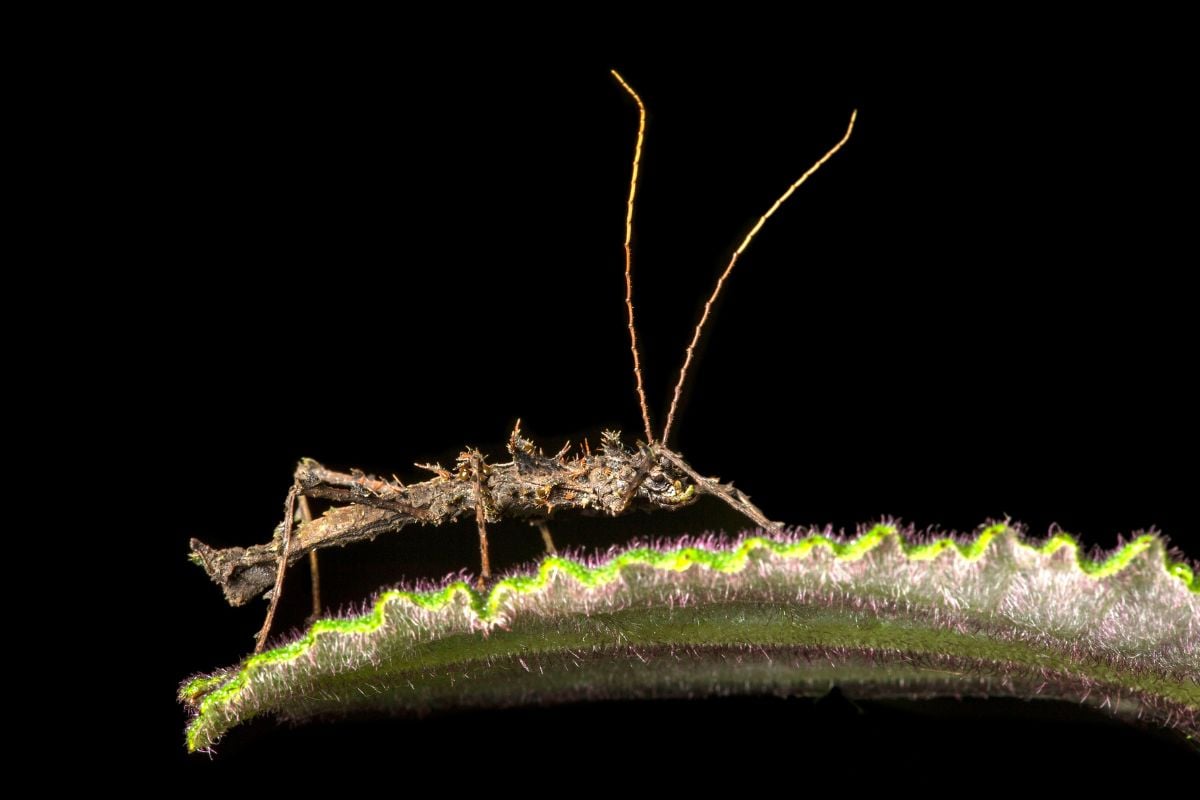 The thorny stick insect is an insect species native to the Malay part of Borneo, the Philippine island Palawan, and Benguet. A. asperrimus is categorized in the Aretaon genus of the order Phasmatodea. While called the thorny stick insect, it is unlike many typical stick-like insects.

Additionally, many other stick insect species have thorny bodies and appendages. The thorny stick insect is a nocturnal species, preferring to remain hidden among bark on food plants during sunlight hours. Males hitch rides on females for several days during, as well as before and after, they mate.

About four or five weeks after their final molt, females start laying one or two eggs per day in the soil. Eggs are sensitive to temperature and nymphs begin to emerge after 12 weeks. Occasionally, eggs do not hatch for up to five months.

Nymphs have longer horns in adolescence than adults for enhanced self-defense against predators. This species is quite easy to keep in captivity and breeds more successfully than other species of Phasmatodea. They can eat ivy, hazel, beech, oak, bramble, and hawthorns.

This variety in diet makes them an accessible private specimen for newcomers to stick insect care.

4. Now That’s What I Call Color 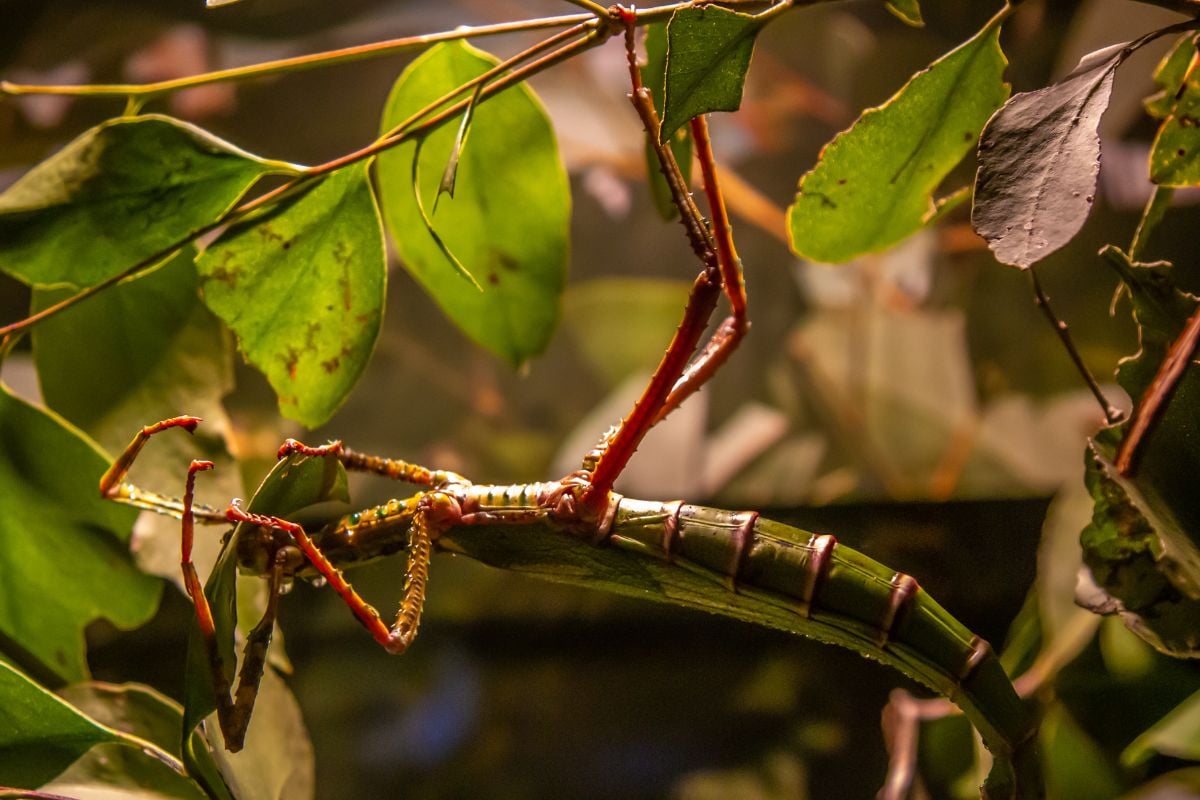 Archrioptera fallax is a stick insect species native to the island of Madagascar. These are one of the most stunning stick insects on this list and arguably on the planet. Male A. fallax are a bright electric blue color with striking green tints and two eye-catching rows of orange spines on the femurs.

The underbelly and sides of the thorax are lined with dark spines. Male specimens are flightless with small vestigial wings. Their forewings are a bright yellow with a similarly colored ridge on the hindwings, with the wing’s center being primarily black.

Males have an abdomen that forms a sort of club tail, and its abdomen gradually spreads outward in a hexagonal shape. Female specimens are not as brightly colored for improved camouflage. Sporting a light brown with red spines over the head and thorax, as well as the femurs, they sometimes have light cyan on the head and inner femur.

Females are also flightless with less pronounced yellow coloration on the forewings. Females’ abdomens end in a pointed ovipositor in comparison with male’s more rounded, club-like abdomens. Both sexes have off-white stripes on the sides and top of the head.

The more colorful males grow up to 13 cm long, but females can reach a far more impressive 18.5 cm. Eggs are laid in the soil after mating and may incubate for up to nine months. Similarly, their wild lifespan is not known, but they can live up to 10 months from hatching (about 4 months as an adult) when kept in a terrarium.

5. An Insect Who Likes to Fish 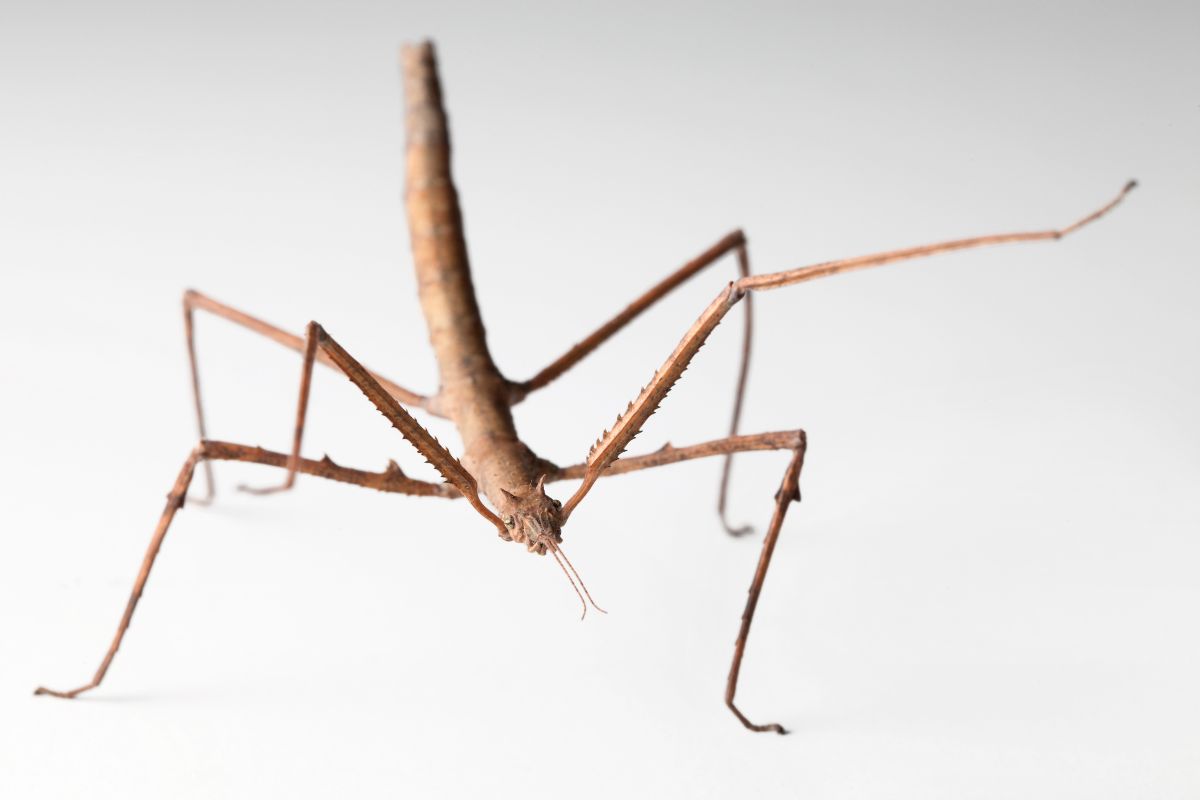 The New Guinea spiny stick insect is an endemic phasmid species native to Australasia. This species has colors ranging from light brown to fully black, an adaptation that lets it blend well with rotten wood and tree bark. Both males and females have wings but are flightless.

This species exhibits a thickly armored exoskeleton with spines lining its body and legs. Males tend to be smaller and thinner than females, topping out at about 10 cm. Females can reach 14 cm long.

E. calcarata males have larger hind leg femurs with a curved thorny appendage underneath. These spines are so long that they are often used as fish hooks in New Guinea. The thorny devil stick insect is nocturnal.

It feeds after sunlight hours and clusters together in hiding spots during the day. They are most often found hiding in tree hollows and under bark. Females produce eggs after mating that incubate for up to 6.5 months.

In populations without enough males, this species is also known to reproduce asexually. E. calcarata males fight to secure mating rights. Nymphs are quite defenseless and crawl up food plants to collect near the top, where they tend to be safest. 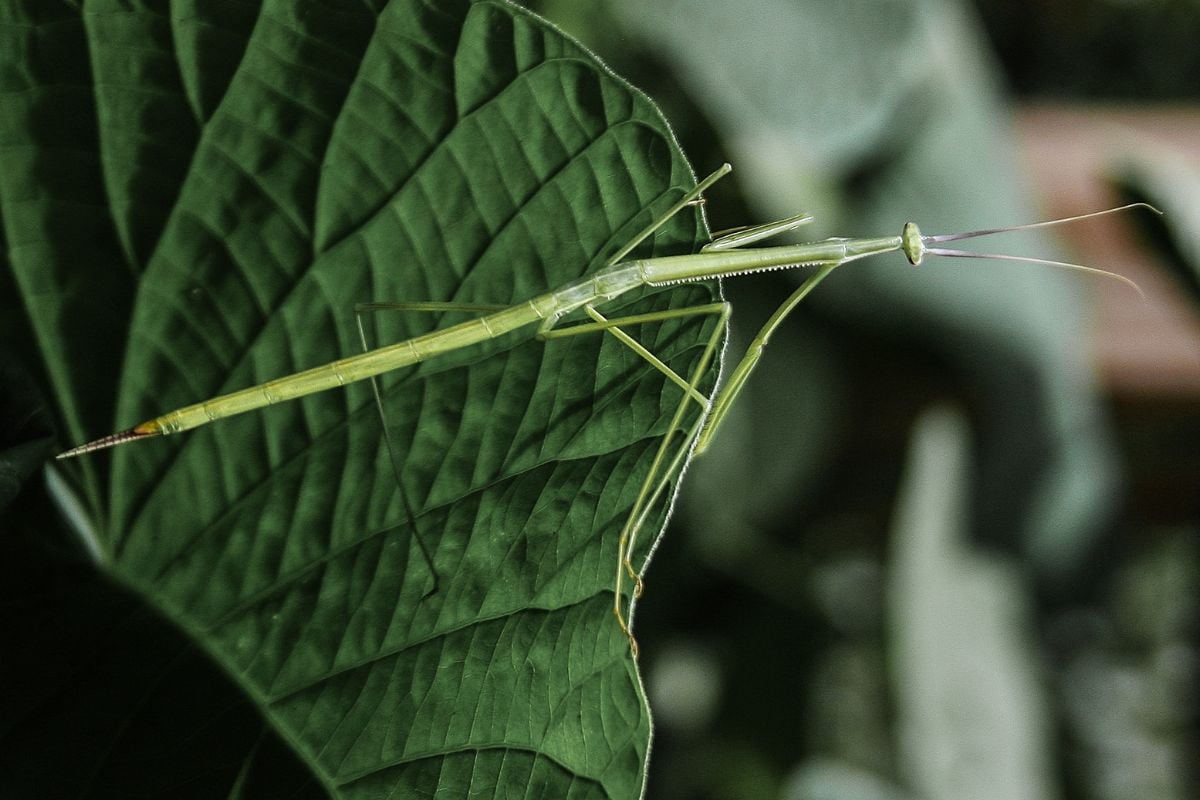 The Annam stick insect is a species native to Vietnam’s tropical forests. They consume a wide herbivorous diet and can be easily kept in captivity when fed hawthorn, blackberry bramble, red maple, rose, and oak. These insects typically reach 4 to 5 inches (100-120 mm) long with oval-shaped heads and prominent, thin antennae.

Their mouths open horizontally for greater efficiency in eating foliage. Their color ranges from a lighter tan in youth to various shades of brown in adulthood. They usually turn green right after molting and darken over time.

This species can lose legs when molting or being attacked, which unfortunately do not regrow. M. extradentata is distinct from many other stick insects because it lacks even the small vestigial wings common to most species. Males typically have longer antennae with thinner, smoother bodies than females.

These antennae are often thin enough to resemble thread. Female specimens sport two small horns atop their heads with much shorter antennae. Because the Annam stick insect mainly reproduces asexually, male specimens are much rarer.

Females lay hundreds of eggs on forest floors which hatch after a few months. This insect is a shorter-lived variety, usually making it between five and seven months. Nymphs resemble parents in all but size.

These insects molt up to six times before adulthood and begin reproducing at three months old. 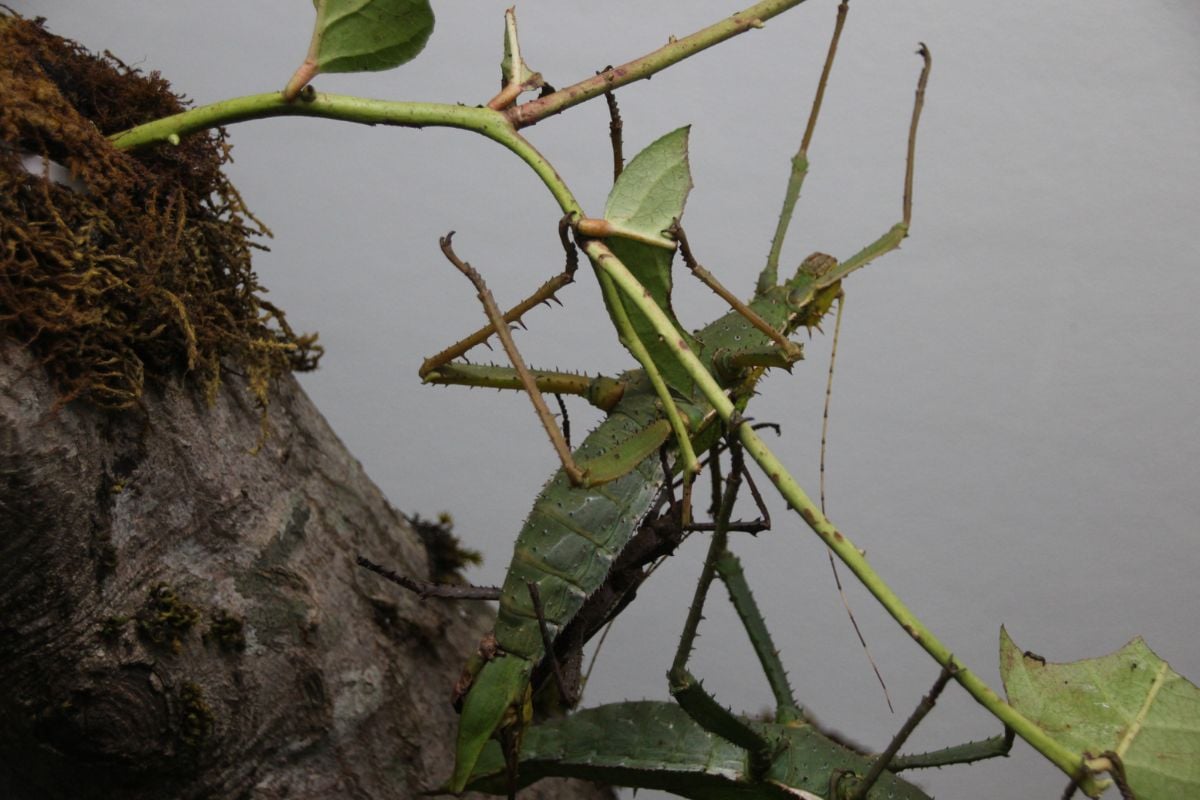 The Malayan jungle nymph, is the only stick insect so far categorized in the Heteropteryx genus. They are common sights in zoos and terrariums because of their prominent size. The species is native to the Malay Archipelago in Borneo and on the Malay Peninsula.

It feeds on plant foliage nocturnally. Female specimens are larger and wider than males at up to 5.5 inches wide and 6.7 inches long. They can weigh up to 65 grams, making them one of the heaviest living phasmids and insects.

Females are usually lime green in coloration but can be found with yellow or even rarely reddish brown exoskeletons. Both pairs of wings are shortened and the green forewings cover the bright pink hind wings. Hindwings cover the insect’s entire abdomen.

This species is entirely flightless nonetheless. Males are typically only 3.5 inches wide and about 5.1 inches long. Males sport thorny spikes along their legs and body, just like females, but are usually a mottled brown color.

When their wings are closed, this species exhibits a lateral striping pattern. Males and females are capable of defensive stridulation, making a loud noise when endangered. They typically take a defensive stance with spread hindlegs and raised abdomen, opening and closing the wings in a jerking motion.

This is often enough to scare off a would-be predator. But these insects can also snap their legs together in a scissoring motion, using their spines as a defensive weaponry. The Malayan jungle nymph is often incorrectly believed to hold the record for the largest insect egg.

Females lay eggs individually in the soil, which incubate for up to 14 months. Nymphs are able to lighten their color during the day and darken it again at night for better camouflage. These insects form sleeping communities until their fourth larval stage.

During this, they cluster together on food plants. Nymphs start out beige. Males darken progressively after each successive molting. Females become a striking green after their third molt.

Malayan jungle nymphs have their final molt about a year after hatching, the fifth in males and the six in females. At this point they reach their adult form, in which they may live for six to 24 months. 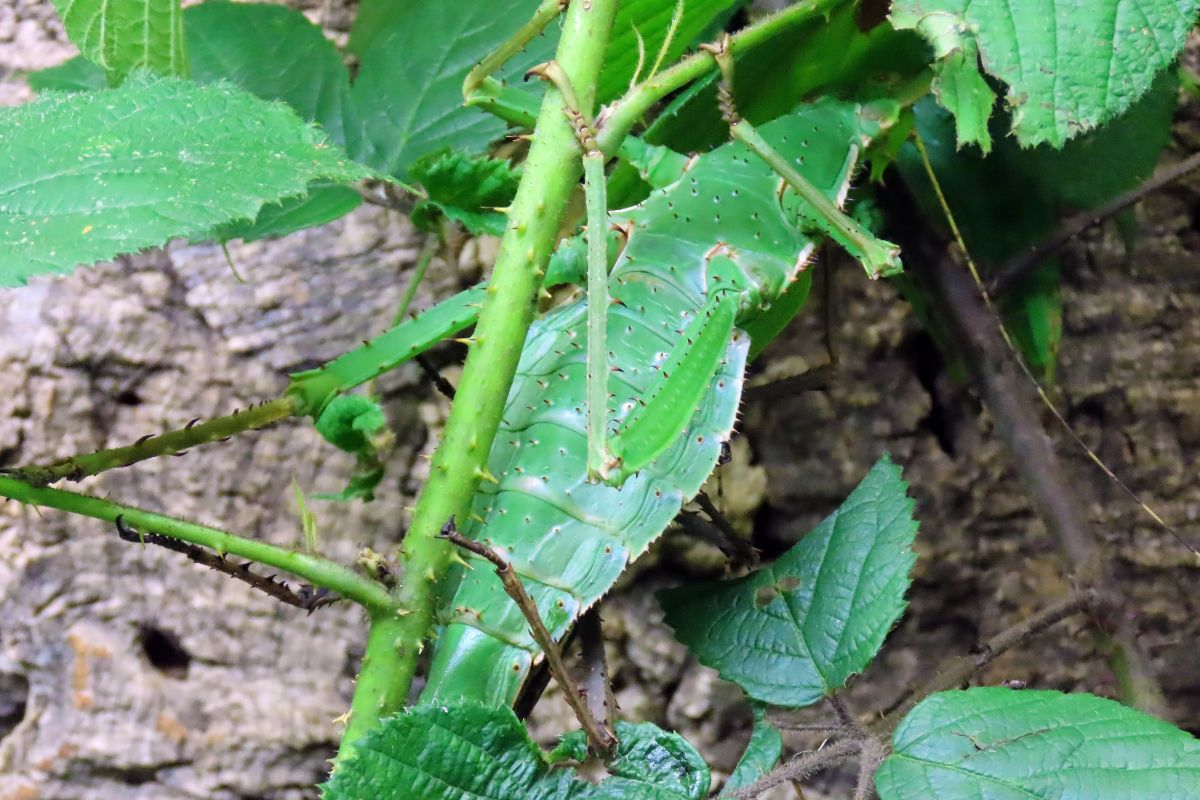 The great walking leaf is a stick insect species native to Malaysia. They are extremely common in the west Malaysian tropics and can reach up to 105 mm in size. Females have large elytra lying edge to edge on their abdomens, usually lacking hind wings.

This naturally makes females mostly flightless. Males have smaller elytra and vestigial wings that look like transparent leaves. This makes them entirely flightless.

Most wild specimens of this species are females. The first male was observed in 1994— 10 years after the species was first described. The species produces primarily asexually when kept in captivity.

Their reproductive habits in the wild are entirely unknown. Eggs hatch about six months after incubation and wingless nymphs tend to be red or brown. Nymphs develop their green color from feeding on foliage.