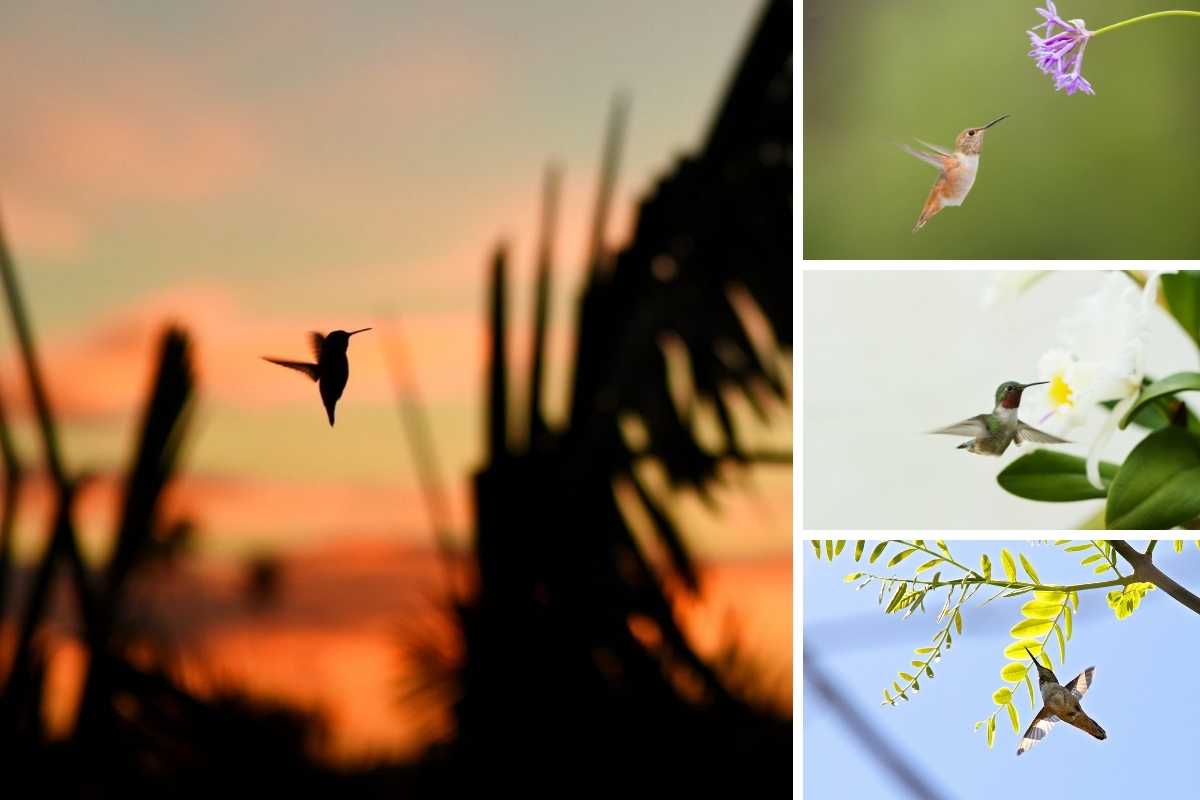 Did you know that there are bugs out there that look like hummingbirds? Crazy, right? Everyone knows that insects can be a nuisance, but sometimes they can be downright beautiful – even if they’re still bugs.

A hummingbird is a small, colorful bird that is known for its ability to hover and fly backward. They are found in North and South America and are the smallest birds in the world. Hummingbirds have a long beak and a fast metabolism, which allows them to eat a lot of food and drink a lot of water.

All hummingbirds have a few things in common, regardless of their size, color, or species. Here are some hummingbird characteristics to keep an eye out for:

Some of the most common types of hummingbirds include:

In the rest of this article, we will look at the different types of bugs that can easily be mistaken for hummingbirds, as well as why the features and traits can be so confusing! Now, without further ado, here are 10 of the most convincing imposters. 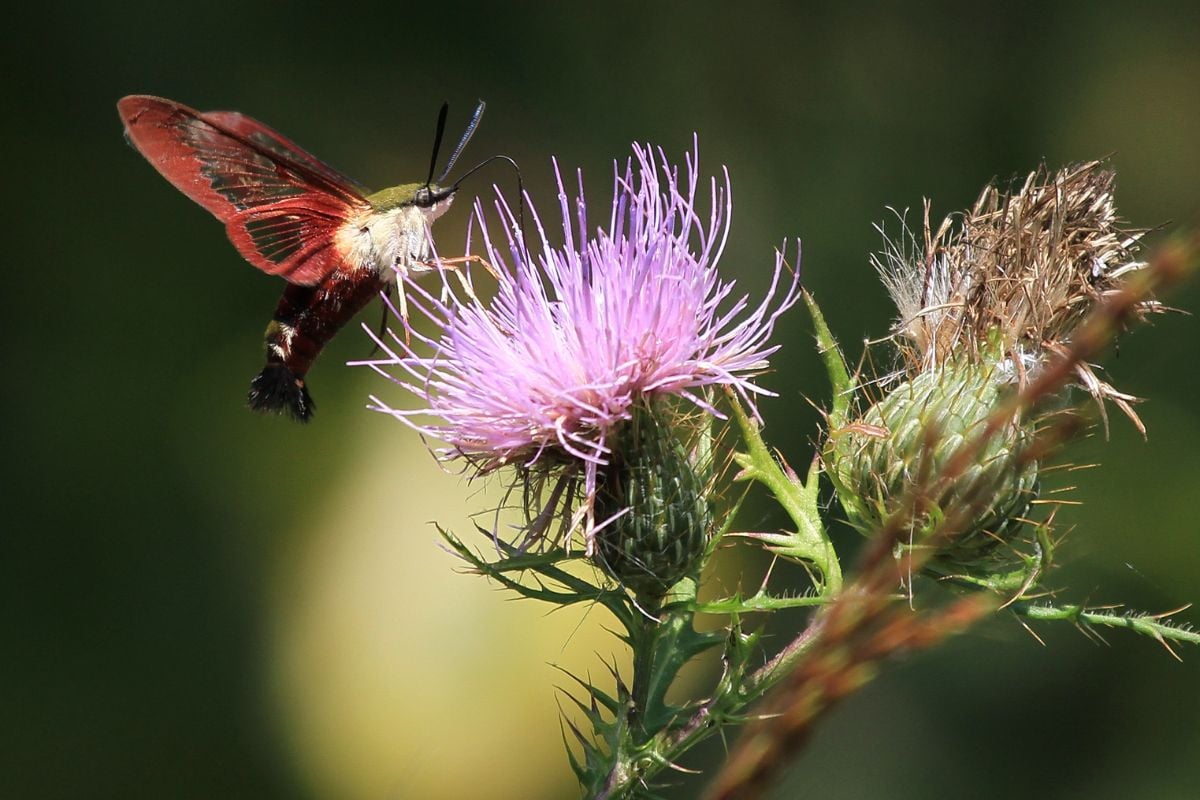 This moth is found in the western United States and Canada. It has a wingspan of about 1.5 inches and is colored yellow, black, and brown. The Rocky Mountain clearwing moth looks so much like a hummingbird that it’s often called a “hummingbird moth.”

They also have the ability to rapidly change their flight direction, so if you don’t get a good look at them, it’s easy to confuse them with hummingbirds! In general, these moths sleep during the day and are most active at night. However, you might see them flying around during the day if the weather is warm and sunny. 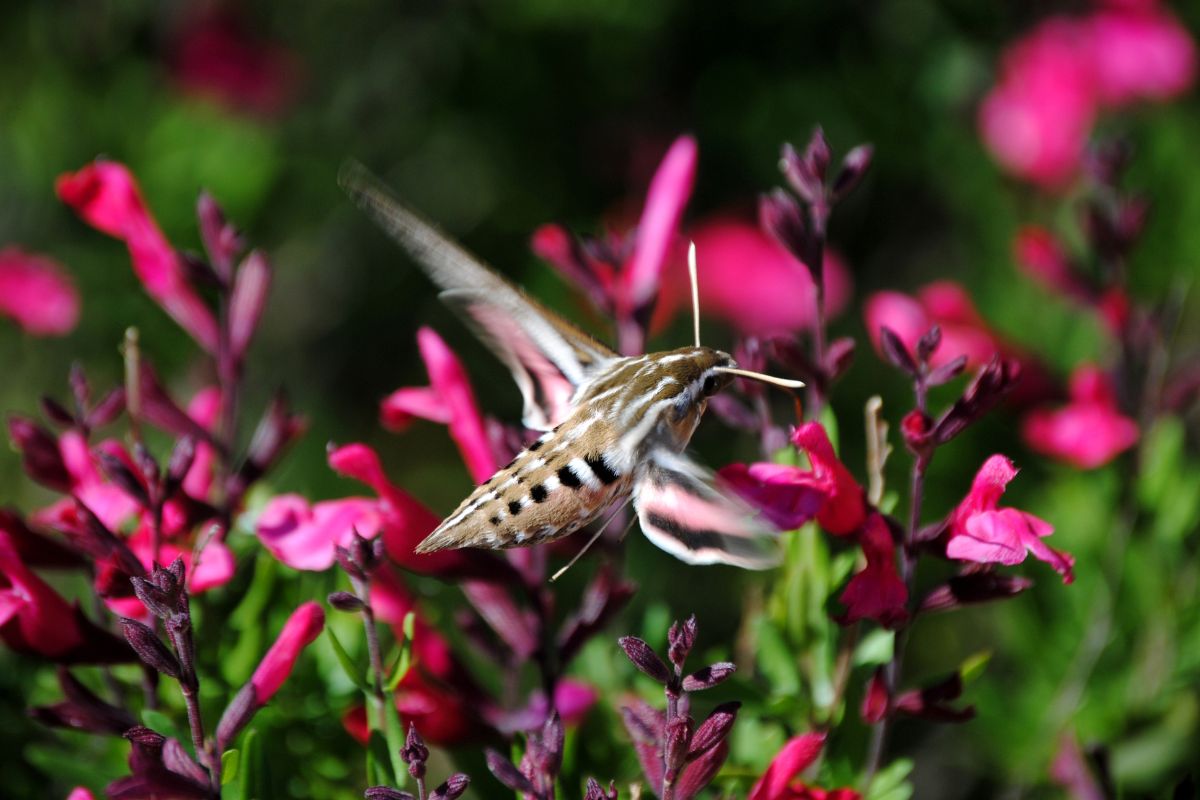 This moth gets its name from the white lines that run along its wings. The lines help to camouflage the moth as it rests on tree bark or leaves during the day. Its wings also have a feather-like texture that makes it look like a hummingbird at a glance.

At night, the moth becomes active and goes in search of food. The white-lined sphinx moth feeds on nectar from a variety of flowers, using its long proboscis to reach deep into the blooms. You might see it flying around during the day if the weather is warm and sunny.

However, generally, it comes out in the early evening. 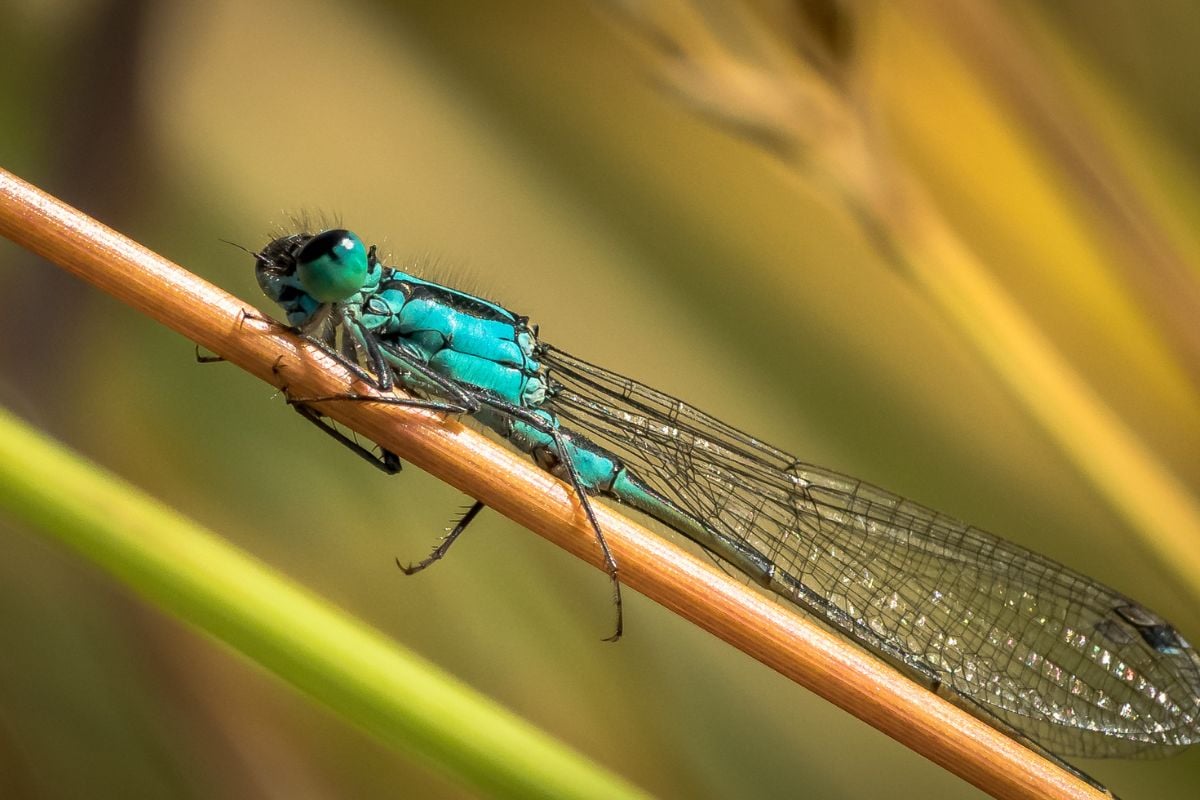 Believe it or not, these little guys can often be mistaken for baby hummingbirds. The blue-tailed damselfly is found in North America, Europe, and Asia. It has a wingspan of about 1.6 inches and is colored blue, green, and black.

At first glance, you might think that this little insect is a hummingbird because of its size and color. But upon closer inspection, you’ll notice that it doesn’t have a long beak like a hummingbird. Instead, it has a short proboscis that it uses to drink nectar from flowers.

The blue-tailed damselfly is a predator and will often eat other small insects, such as mosquitoes. You might see them near ponds or streams, where they like to perch on vegetation. They are most active during the day, but they will also come out at night if the weather is warm. 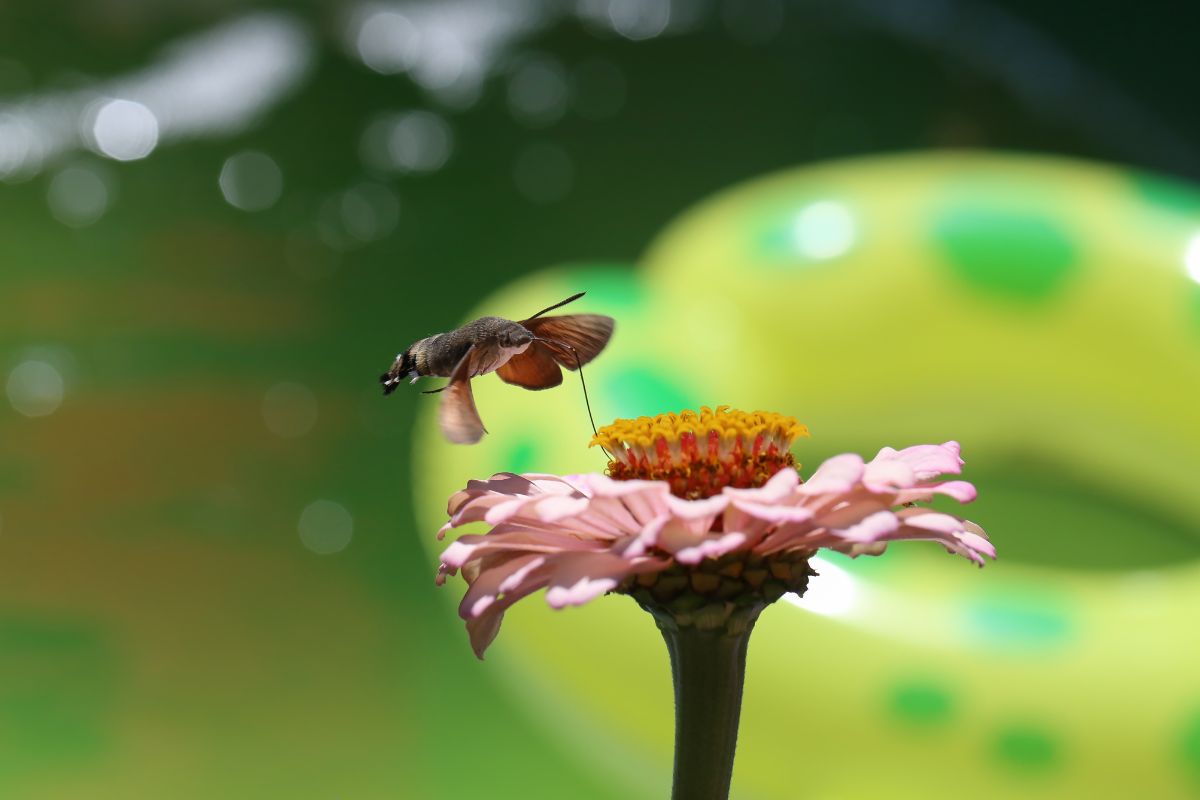 These moths are found in Europe, Africa, and Asia. They have a wingspan of about 2.4 inches and are colored gray, brown, and white. As you can probably guess from their name, these moths look strikingly similar to hummingbirds.

The hummingbird hawk-moth gets its name from its ability to hover in midair like a hummingbird, thanks to its long wings and rapid wingbeats. It’s also capable of flying backwards! This moth feeds on nectar from flowers, using its long mouthpiece to pierce the flowers.

It’s most active during the day, but you might also see it flying around at night if the weather is warm. It has good night-vision, so you will probably see these all throughout the early to late evening in the summer months. 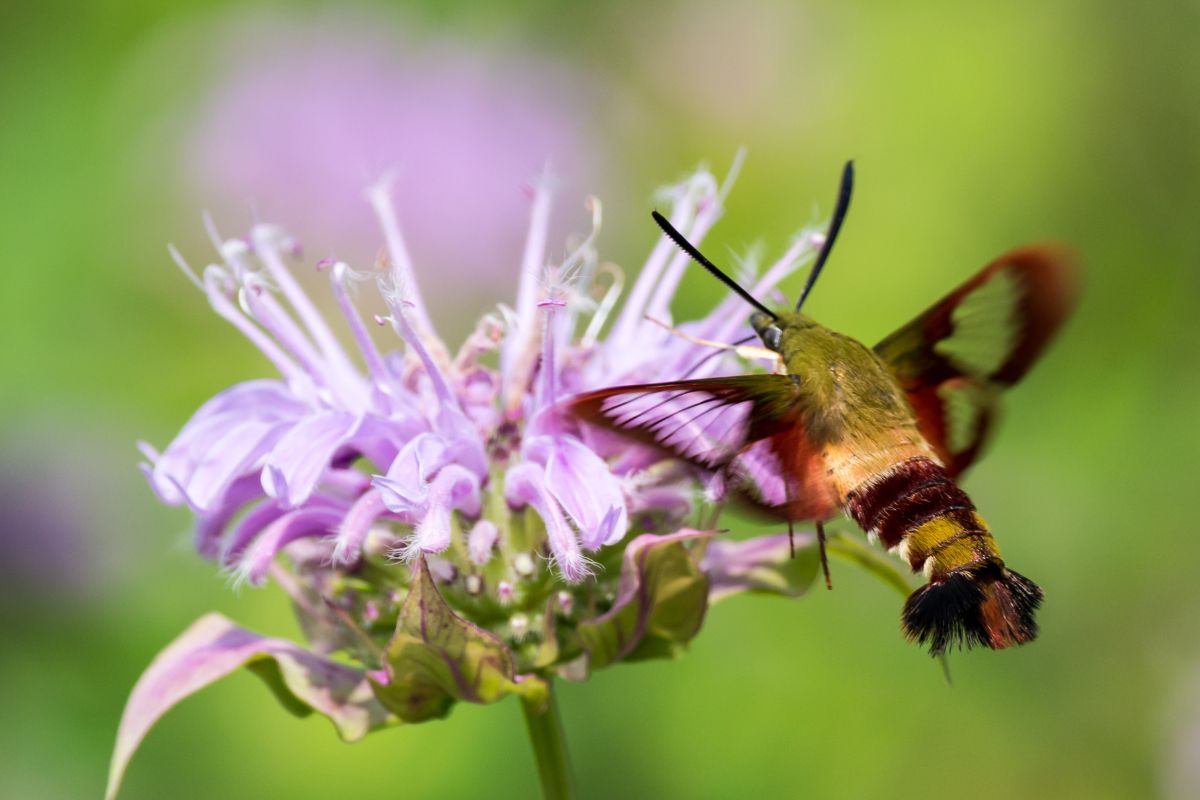 However, the larvae of the moth can survive for up to three years. The larvae feed on the leaves of various plants, such as maples, birches, and willows. The snowberry clearwing moth is not known to be a particularly nomadic species.

However, it has been known to travel long distances in search of food. Some interesting facts about the snowberry clearwing moth include the following: 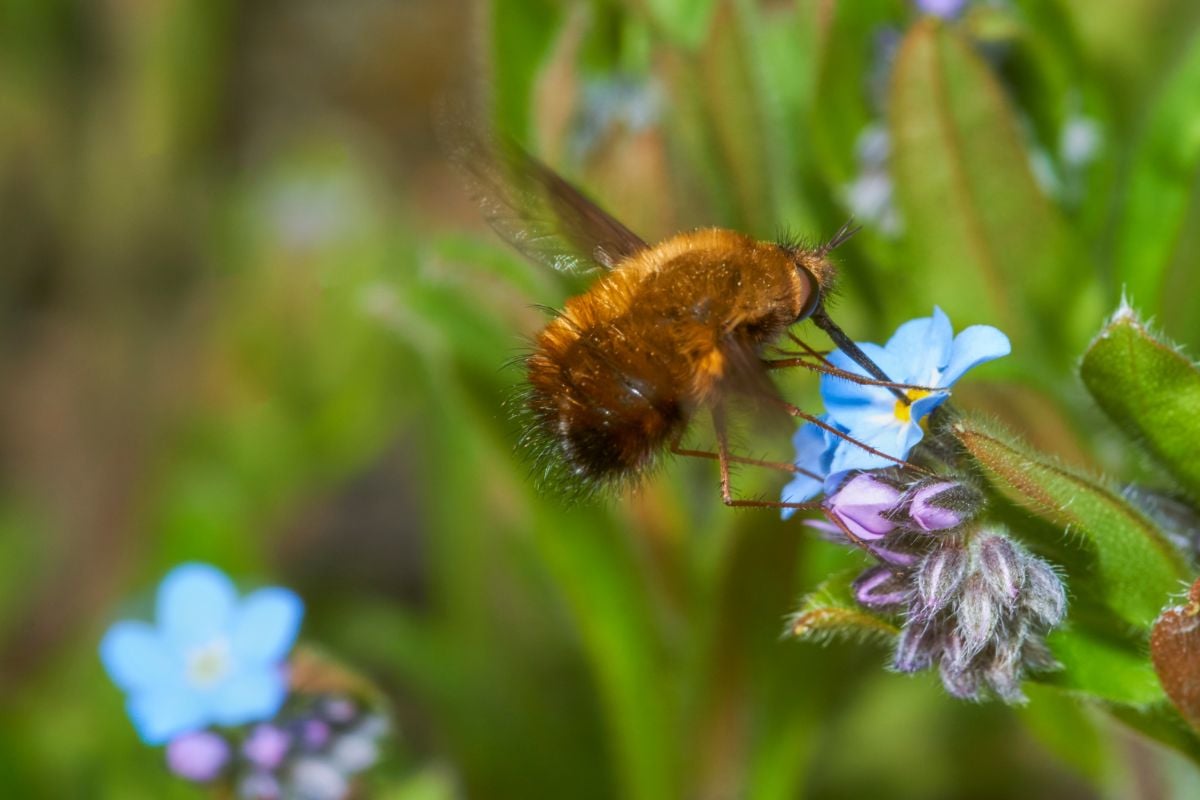 In general, the greater bee fly has a striped pattern on its abdomen and two yellow spots on its wings. The bee fly gets its name from the fact that it is often found near bees. The greater bee fly feeds on the nectar of various flowers, such as dandelions, clover, and thistles.

It has a long tongue that it uses to reach the nectar deep inside the flowers. The greater bee fly is most active during the day, but it can also be observed feeding at during the nighttime hours. Some interesting facts: 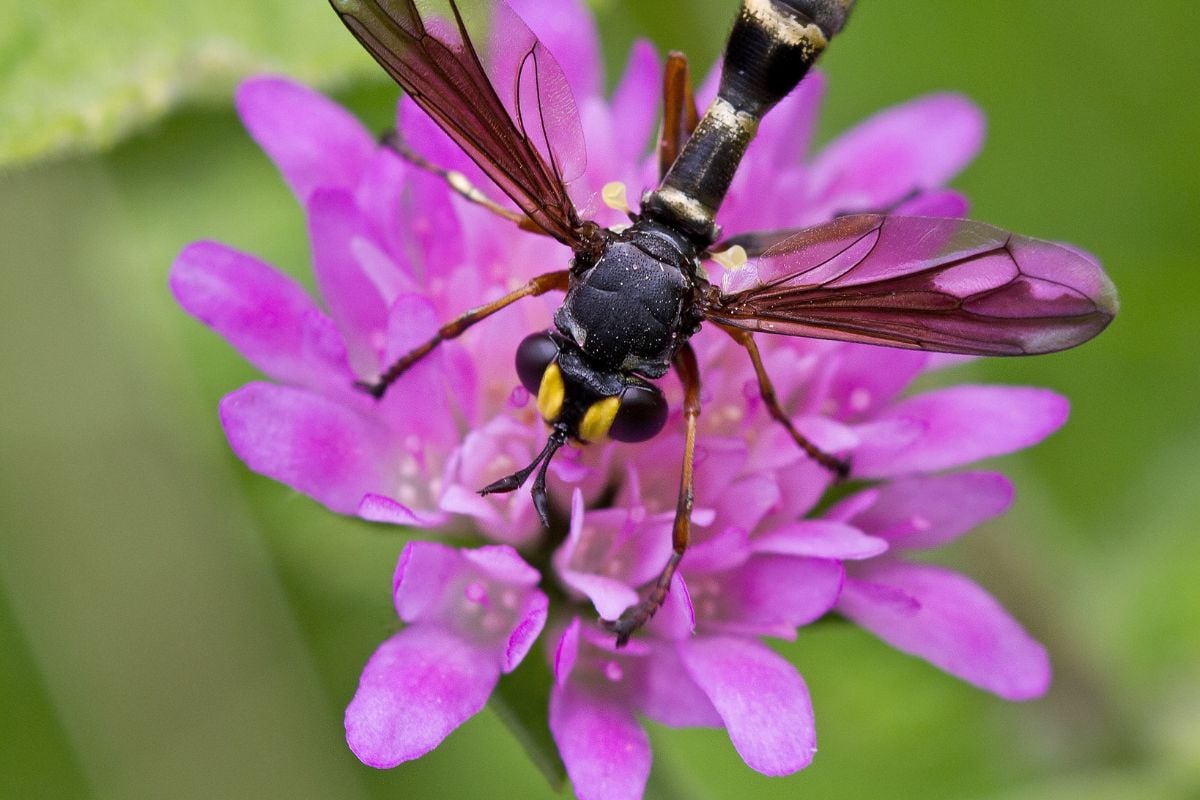 This type of hummingbird bug is found in South America, Central America, and Mexico. It is a very small bug, only reaching about 3-4 mm in length. Its body is a reddish-brown color, and it has black stripes on its abdomen.

It is actually a very large species of fly that gets its name from the way it hovers in midair like a hummingbird. It eats nectar from flowers using a tube-like mouthpart. The adult female bug will lay her eggs on leaves near where she knows there will be plenty of food for the larvae (baby bugs).

The larvae are black and white striped and have long legs. They will grow to be about 10 mm in length. This type of bug generally only lives for about 2-3 weeks.

The Nemestrinus Rufipes feeds off of the nectar of flowers using its long proboscis. It is most commonly found feeding on the flowers of lantana and Verbena. Some of the characteristics it shares with hummingbirds include: 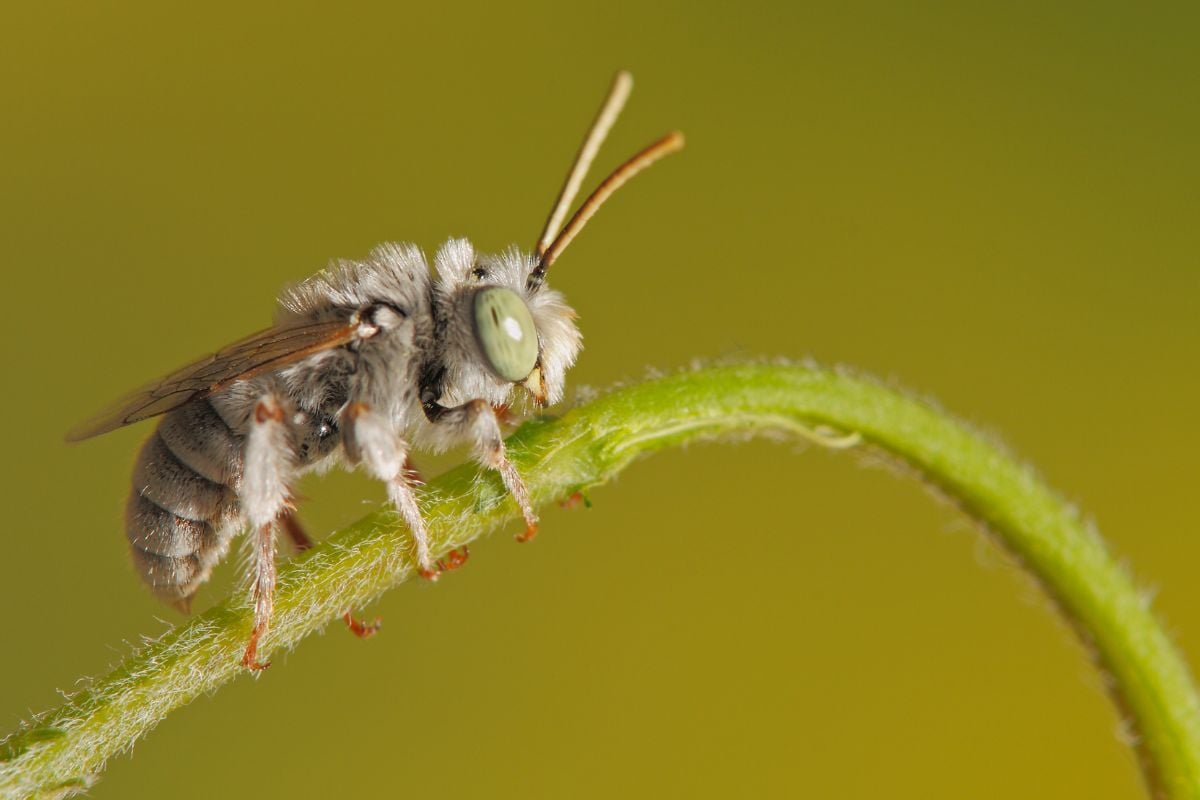 Number 8 on our list is the White-Headed Bee Fly. This type of bee fly is found in North America, Europe, and Asia. It is a medium-sized bee fly, reaching about 12 mm in length.

The female bee fly is larger than the male, with a body that is mostly black in color, while the male has a more brownish body. The head of both male and female bee flies is white. The White-Headed Bee Fly feeds on nectar and pollen, using its long mouthpiece to reach the nectar inside flowers.

It is often seen hovering in midair like a hummingbird while it feeds. The female bee fly will lay her eggs on the ground, near where she knows there will be plenty of food for the larvae when they hatch. The larvae are small and white with black spots.

They will grow to be about 12 mm in length. 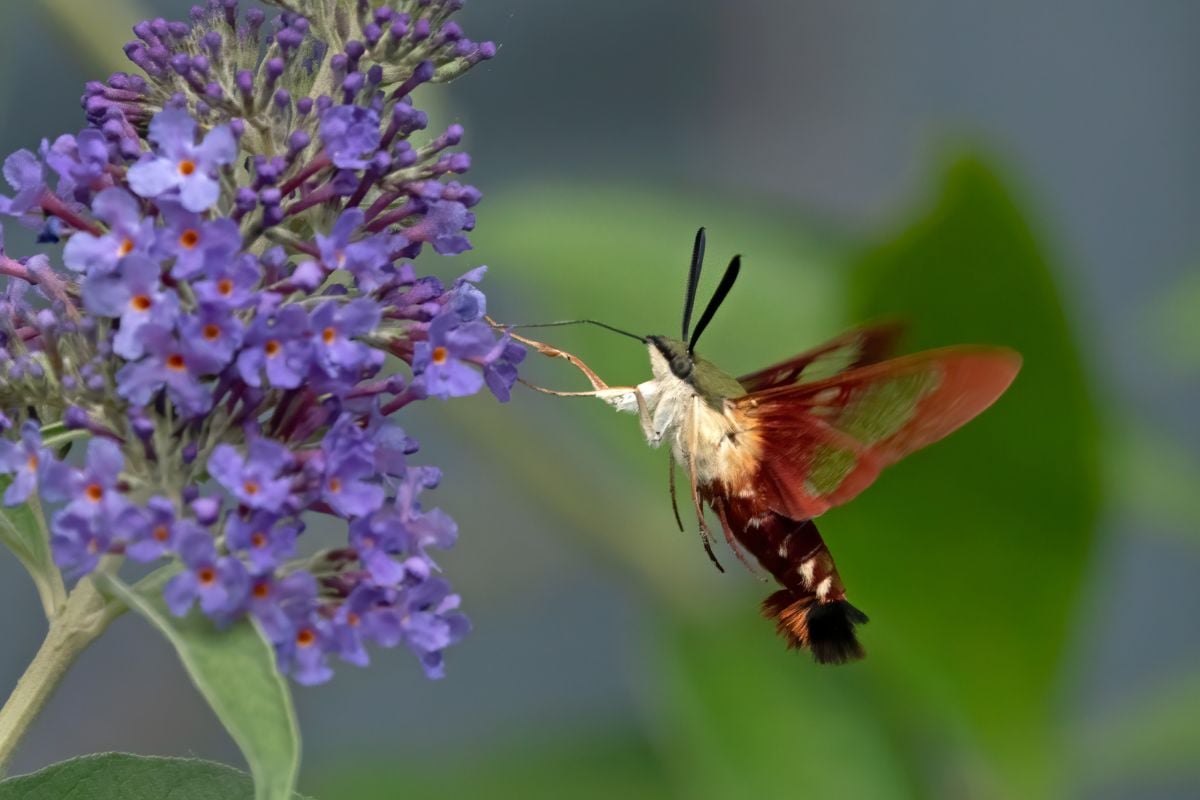 It’s right there in the name! A hummingbird clearwing gets its name from the fact that it looks a lot like a hummingbird. This type of moth is found in North America, Europe, and Asia.

It is a small to medium-sized moth with a wingspan of about 3-4 cm. The body of the moth is black, but the wings are clear with dark markings. The Hummingbird Clearwing moth feeds on flower nectar.

It also has a long proboscis to reach the nectar inside flowers. The Hummingbird Clearwing moth is not considered to be a threat to crops or humans and is actually considered to be somewhat helpful because it pollinates flowers. However, the larvae of this moth can sometimes be a nuisance because they feed on the leaves of various trees and shrubs.

This type of moth is active during the day and is often seen flying around in gardens or near woods. It is attracted to light, so you may see it flying towards porch lights or windows at night. 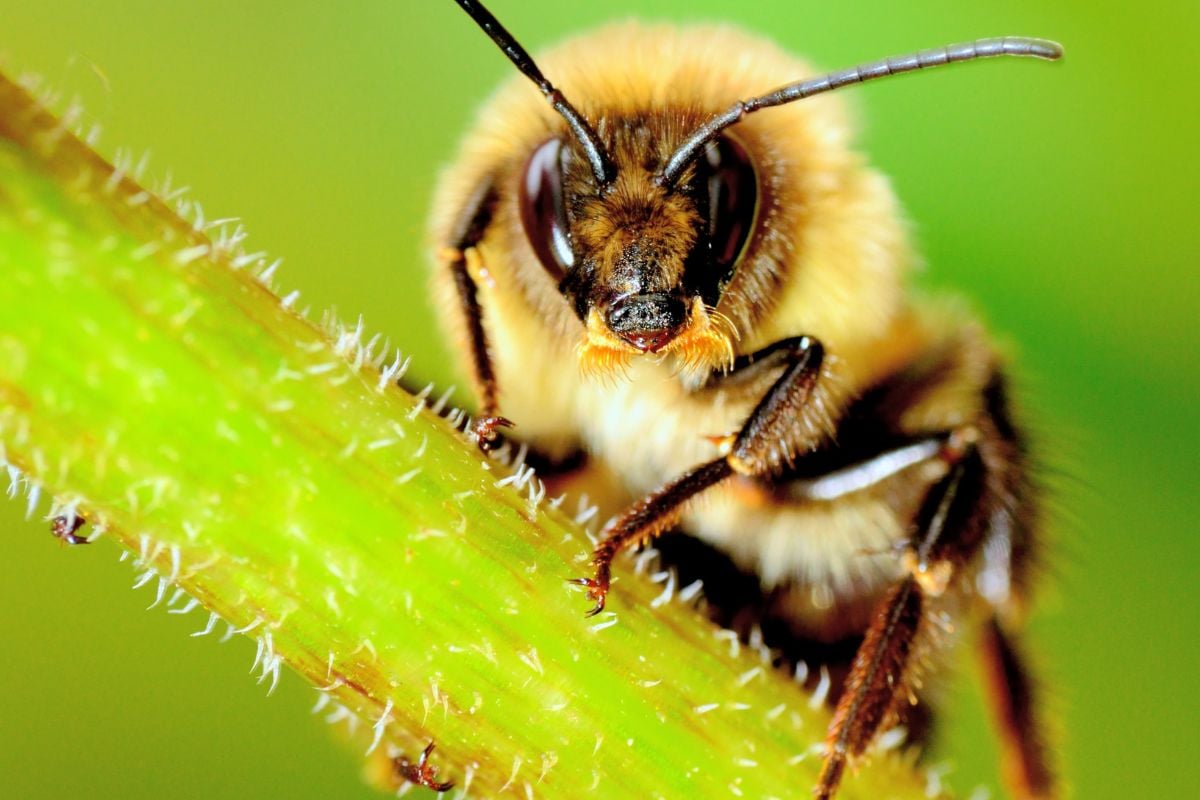 While bees are generally easy to identify, there are reports that people have mixed up these insects with hummingbirds. Bumble bees are found in North America, Europe, and Asia. They are large insects with a body length of about 15-20 mm.

They are fuzzy, and their bodies are black and yellow striped. Bumble bees feed on nectar and pollen. To get to the nectar, they use their long tongues to lap up the sweet liquid.

Like hummingbirds, they are important pollinators of many crops and plants.

How to Tell the Difference Between Hummingbirds and Imposters?

Upon first glance, it can be really difficult to tell the difference between hummingbirds and these rather beautiful insects. That’s why we’ve prepared this little guide to help you figure out which is which the next time you see something flying around your garden or yard! Here are some key differences to look for:

One of the easiest ways to tell a hummingbird and one of these insects apart is by size. Hummingbirds are tiny! The largest hummingbird species, the Giant Hummingbird, only measures about 9 cm in length.

However, the insects can be even smaller! The White-Headed Bee Fly, for example, only measures about 12 mm in length.

Another way to tell these two apart is by color. The vast majority of hummingbird species are brightly colored, with iridescent feathers that flash different colors in the light. In contrast, most of these insects are not brightly colored.

The Hummingbird Clearwing moth, for example, is mostly black with clear wings.

Another difference between hummingbirds and these insects is their flight patterns. Hummingbirds are able to hover in midair, fly backwards, and change directions rapidly. While some of these insects exhibit these characteristics, they generally only exhibit one, while hummingbirds will consistently show all three.

Finally, another difference between hummingbirds and these insects is their nesting habits. Hummingbirds build tiny nests out of the grass, leaves, and other plant materials. They generally lay two eggs per nest.

In contrast, most of these insects do not build nests. The female White-Headed Bee Fly, for example, simply lays her eggs on the ground. So, there you have it!

The next time you see something flying around that looks like a hummingbird, take a closer look and see if you can figure out which one it really is!