Despite the name, buckwheat is a grain that is not even in the same family as traditional wheat. Related to the rhubarb plant, buckwheat has been cultivated by mankind for over 8000 years. Buckwheat is in a category of plants known as pseudocereals. Generally, cereal grains are grown on grasses, but the seeds of a buckwheat plant are grown on another kind of plant.

Despite the fact that buckwheat isn’t grown on a grassy plant, its seeds are prepared and used in the same way that other cereal grains are prepared and used. Because buckwheat isn’t even in the same category of plants as wheat, it is gluten-free and is a favorite grain substitute for those who are trying to eliminate and reduce their consumption of gluten-containing products. 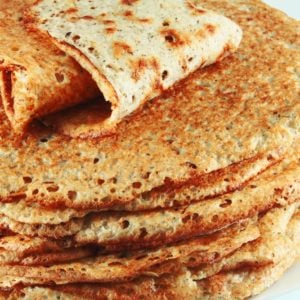 April Freeman
Stacked in golden brown piles, dripping with maple syrup and melted butter, pancakes are a delicious way to start the day. Many people who have found that gluten causes them physical problems miss eating things like pancakes. However, if you are trying to eliminate gluten, you don’t have to say goodbye to this favorite breakfast treat. With our recipe for Buckwheat Pancakes, you can enjoy this favorite breakfast treat in a gluten-free form.
Print Recipe Pin Recipe Add to Collection Go to Collections
Prep Time 15 mins
Cook Time 15 mins
Total Time 30 mins
Cuisine American
Servings 10 Pancakes

Buckwheat used to be cultivated just as frequently as traditional wheat, corn, and oats, but once petroleum-based fertilizers became common, the cultivation of corn and wheat began to out-compete that of buckwheat. Currently, buckwheat is typically grown as a cover crop because it replaces many minerals in the soil that other plants remove. It also attracts many beneficial insects and can prevent pests from taking hold in garden plants and cropland.  Because of the popularity of gluten-free diets, buckwheat cultivation as a food crop is increasing in the United States as more people are beginning to use buckwheat flour as a substitute for wheat flour. However, buckwheat is more than just a wheat substitute. It has copious health benefits and can be part of an excellent diet. Buckwheat has a low glycemic index as compared to many other grains. This means that buckwheat won’t spike one’s blood sugar quite as bad as some other kinds of grain because its energy is slowly absorbed into the bloodstream. This fact can make buckwheat a great alternative grain for those who struggle with diabetes or hypoglycemia. Buckwheat also helps to contribute to cardiovascular health by lowering one’s cholesterol and stabilizing blood pressure. Buckwheat also contains antioxidants that can help fight cancer and prevent inflammation. Another great thing about buckwheat is that it is a great source of protein, which can be a concern for those who consume a largely plant-based diet. Buckwheat flour cooks up easily and doesn’t require any unusual preparation. It provides a more complex, nutty, and rich flavor to the pancakes than traditional all-purpose flour. Try these buckwheat pancakes topped with maple syrup or fruit, just as you would serve traditional pancakes.
Keyword Breakfast, Buckwheat Pancakes, Recipe