If you are looking for a chip dip for a party or just for snacks, this recipe for Black Bean and Corn Salsa may be just what you are looking for. With colorful peppers, crunchy corn, and savory herbs and spices, this dip is as attractive as it is tasty.

Everyone knows that one great snack is salsa. Typically, salsas are made from a base of tomatoes and peppers, but did you know that you can make them from many other kinds of vegetables? This is a great thing to know if you have someone who isn’t crazy about tomatoes, and yet, they are trying to eat healthily.

Of course, most people think of salsa as a snack to be eaten at random times during the day or as a side item to a dinner menu that features southwestern selections like quesadillas, tacos, or other offerings. However, this salsa has some flexibility that you may not have previously considered. 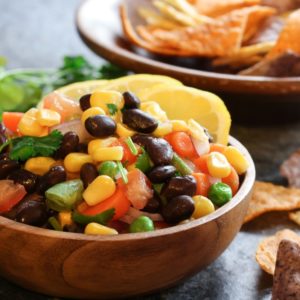 April Freeman
If you are looking for a low-calorie, deliciously fresh tasting dip to whip up for a party, cookout, or just for noshing in front of the television, this recipe for Black Bean and Corn Salsa may be exactly what you want. The preparation time is minimal and, since it uses mostly canned ingredients, you won’t be standing in the kitchen all afternoon chopping tomatoes and other vegetables. It will keep for up to five days in the refrigerator, so why not mix up a batch and munch on it all week long?
Print Recipe Pin Recipe Add to Collection Go to Collections
Prep Time 5 mins
Refrigeration Time 1 hr
Total Time 1 hr 5 mins
Cuisine Mexican
Servings 10 Servings

You can use it as a topping for Southwestern seasoned hamburgers. Simply spoon it over the meat before you add the bun. Alternately, you can top grilled pork chops or grilled chicken breasts with this delightfully fresh topping for a veggie-laden protein menu item. Of course, you can also use it as a filler for tacos, tortillas, or other classic Mexican foods. This salsa is fantastic right as you prepare it, but for even better flavor, let it sit in the refrigerator for at least an hour before you serve it. Refrigerating things like salad dressings and salsas allows the entire dish to absorb the flavorings and seasonings that were included in the recipe. When you remove the dish from the refrigerator, the flavors of the Black Bean and Corn Salsa will be intensified. Our recipe for Black Bean and Corn Salsa is one of those recipes that is just as lovely to look at as it is tasty to eat. With the cheerful colors of the peppers, corn, and cilantro along with the black beans, just setting the dish on the table will whet the appetites of all you are serving. Be sure that you serve it in a pretty glass dish to gain the full effect of the visual appeal. What if you are really in a hurry, and you don’t have time to chop the onion, pepper, and cilantro? That is no big deal if you have a food processor. Simply chop off a piece of the onion, slice your peppers into strips, and toss a few sprigs of cilantro in the food processor. Pulse it just a few times. You want the veggies to stay in larger chunks; you do not want them minced. This recipe is great because you can customize it according to your own tastes. If you don’t care for the sharp tang of red onion, feel free to buy a milder, sweeter onion instead. Or if you have a part of yellow onion in the fridge, this recipe will be great with that too. As far as bell peppers, select the color that appeals to you most. Red, yellow, or green will all give you a salsa that is tasty and colorful. Additionally, if you are one of the people in the world who cannot stand the flavor of cilantro, feel free to omit the cilantro or substitute for it with chopped fresh parsley. You may be in the category of people who are called “supertasters.” These people have incredibly sensitive palates that detect bitter compounds in their food. Additionally, other supertasters find that cilantro tastes like soap. Cilantro is not vital to this recipe. It is okay to leave it out.
Keyword Black Bean and Corn Salsa, Recipe, Side Dish