The classic, old-fashioned Banana Pudding Recipe features a meringue topping. This was likely because the custard uses three egg yolks, and smart, frugal cooks did not want to waste the egg whites. Therefore, they would whip the egg whites into a fluffy meringue topping and bake it in the oven.

We chose not to top our Banana Pudding with meringue. While many people love meringue, there are those who really do not care for it at all. They may scrape the meringue off to the side of their dessert plates and eat around it. 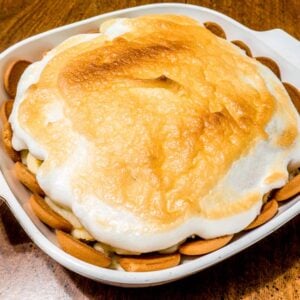 Whipped cream is a much more universally loved topping for this dessert. However, if you want to store whipped cream, it generally deflates into a runny puddle. That’s why we chose to create stabilized whipped cream to top our dessert. Stabilized whipped cream uses gelatin to keep the whipped cream light and fluffy while the dessert sits in the refrigerator for several hours to soften the vanilla wafer cookies. Banana Pudding as a dessert was invented in the late 1800s, as cooks experimented with the newly-imported tropical fruit, the banana. Often these desserts resembled the old-fashioned English trifle, using cake to create layers with fruit and cooked custard. In the early 1900s, the Nabisco company created the vanilla wafer cookie. Savvy cooks began using the vanilla wafer in their Banana Pudding recipes to replace the cake that had previously been used. A few decades later, the Nabisco company printed the recipe for a Banana Pudding on the side of their boxes of vanilla wafers and this recipe became even more popular. Though in modern times, this recipe is touted as a distinctively Southern recipe, oddly, it was created all over the nation from the beginning of the 1900s. Nobody quite knows when it became a “Southern” recipe, but the trend of labeling it as such started in the 1950s. Additionally, no one knows why this recipe is labeled as a Southern one either.
Keyword Banana Pudding, Dessert, Recipe