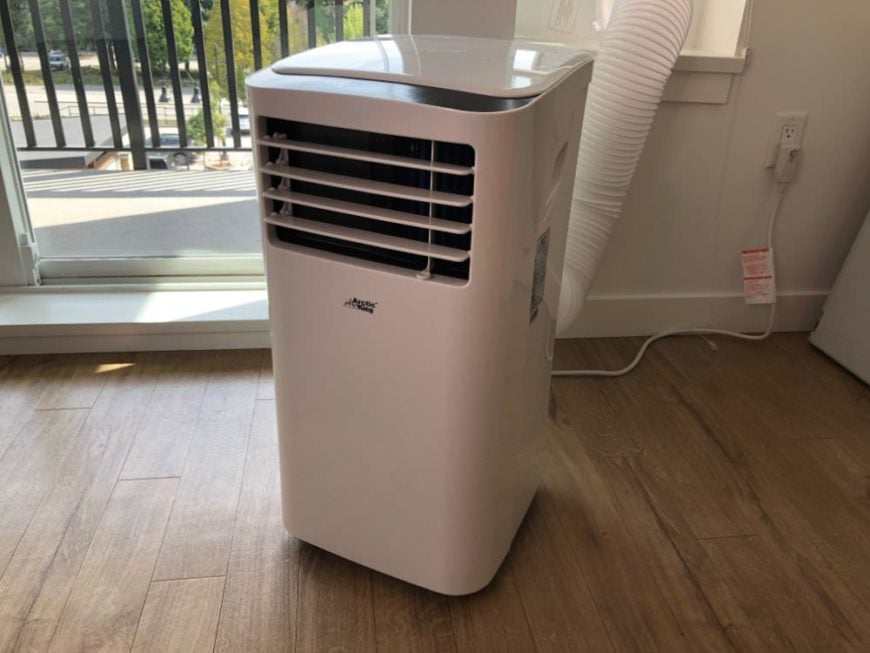 5 summers ago we had a heatwave in Vancouver, BC.

I live in an area that doesn’t get all that hot and if it does, it’s not hot for that long.

While I like living in a place that isn’t too hot, the problem is most houses don’ have central air.

When the heat comes, we swelter.

Well, 5 years ago I had enough of sweltering. Our second son was just born and his room was hot.

I trotted off to Rona and bought what would be our first of three Arctic King air conditioners.

This is my Arctic King review.

Does it cool a decently sized room? Fast?

Yes it does so reasonably well, but the odd thing is the coolest setting is only 17° Celsius. Our other AC goes way colder so you can really ice down a room. The Arctic King with such a cap takes a bit longer to ice a room down and even then I suspect in a really hot climate it might struggle to fully cool a room 350 to 450 sq. ft.

However, for our needs in Vancouver, BC where a heatwave is 35° tops, it does the job. We’re able to adequately cool down our kids’ bedrooms with it, so I’m content.

See also  Plumber vs. Heating Engineer - Which One Do You Need?

I also use this AC in my office which is 445 sq. ft. Again, it cools the space down adequately, but if it was cooking hot, I’m not sure it would get as cool as I’d like due to the minimum temp being 17° Celsius.

Is it easy to set up?

Oh yeah, this thing is ridiculously easy to set up. If it fits your window without having to cut anything, it takes a few minutes.

For my condo office, I have narrow windows that slide up and down so I had to cut the plastic plank to fit the narrow width. This took a few extra minutes.

Does it look good?

Who cares how it looks? Haha. Some people do. Let’s face it, portable window ACs sitting in a room will never look good. It’s an appliance sitting out in the middle of the room. Maybe some AC company will get creative and turn it into a table, but not the Arctic King. It’s not ugly. It looks like an AC.

No, this is not a quiet AC. It’s louder than others I’ve owned, but in time it’s white noise. If you’re looking for quiet, this is not the AC for you.

I like the noise because it’s working hard. Our other AC that died wasn’t nearly as loud. It just didn’t have the same power that the Arctic King has.

Can it hook up to any window?

The window needs to be a sliding window and slide so that there’s an opening of 5″ or so for the air tub plank to fit. If you have swinging windows, it won’t work unless you also slam in a big piece of plywood (yikes… but if it’s hot you gotta do what you gotta do).

My office window is narrow and slides up and down so I had to cut the tube plank for it to fit. This was an easy operation. Check it out: 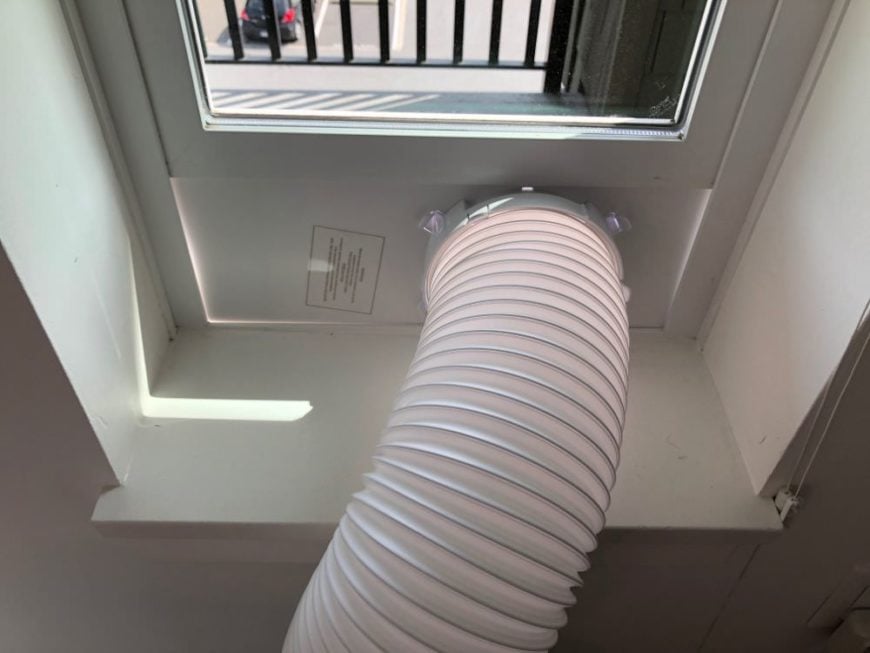 Does it come with a remote control?

Yes, it does but I don’t use it. I never took it out of the bag. I just press the power button and adjust the temp. 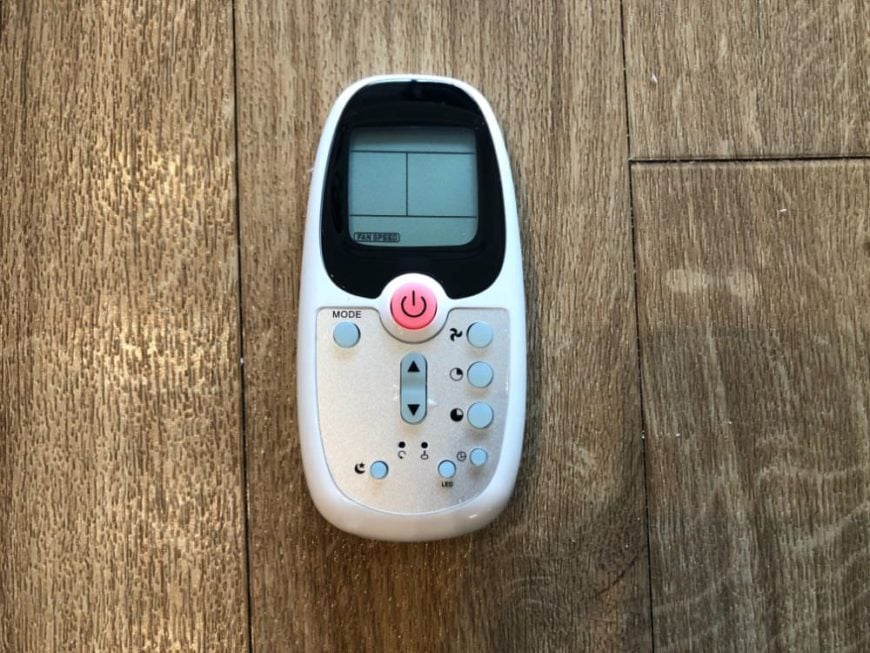 Does it sync to smartphones with an app?

No, it doesn’t. This is not a high-tech AC. It’s simple, which is a big reason I like it. I didn’t have to think to set it up or get it going. I just pressed the power button, turned the temp to the lowest setting and enjoyed a cool room in minutes. 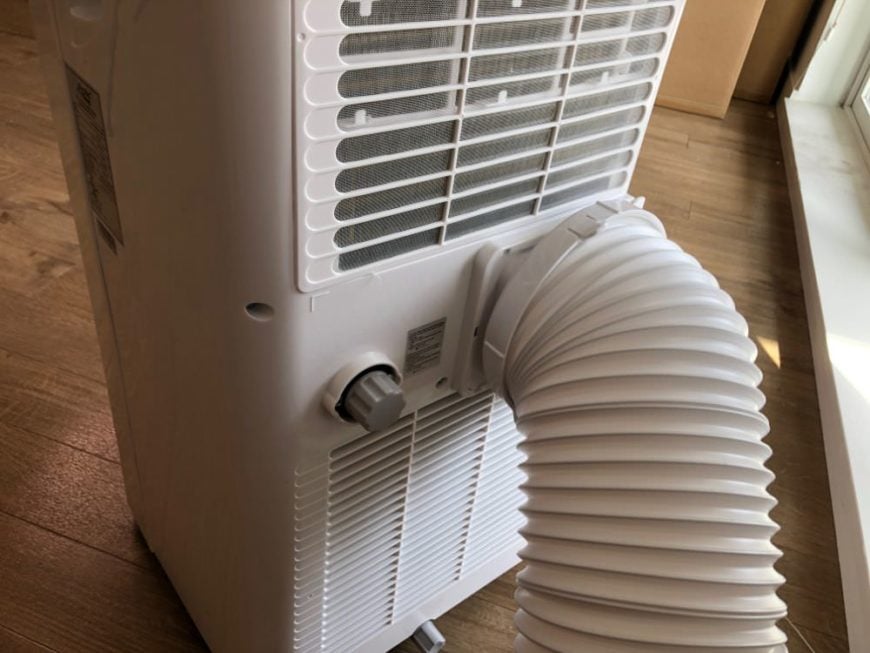 Durable and long-lasting:  I love that the Arctic King AC is a workhorse. They keep on chugging for years. Mind you we only use it a month or so each year, but during those months we run them plenty. We bought another window AC that died while our Arctic Kings keep on truckin’.

Works fast:  This thing can cool rooms pretty fast because it blows out a strong stream of cool air. like I said, it’s a real workhorse.

Simple: This is not a high-tech AC. I prefer it simple. There are two buttons. Power and temp. control. That’s all I need. I don’t care about app integration, Bluetooth, talking to it, etc. I just want it to turn on, blow cold air and not break down. The Arctic King does this in spades. 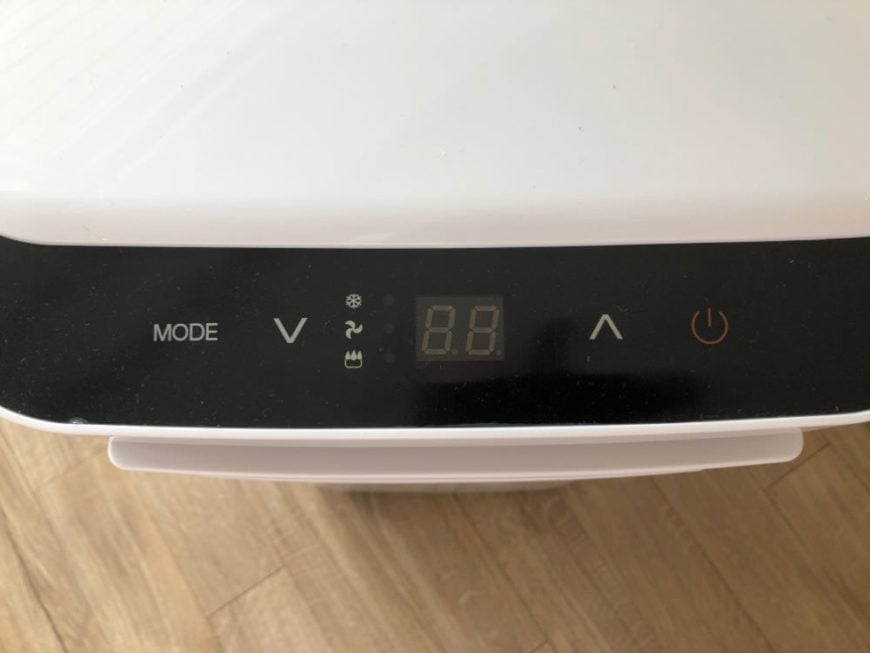 Price:  This is not an expensive air conditioner. You can spend less but also spend way more. For the money, I couldn’t be happier.

It’s loud.  This is not a quiet air conditioner. We have a fourth AC which is much less noisy, but hasn’t lasted nearly as long as our hearty Arctic Kins.

Coldest setting is 17° Celsius. I wouldn’t mind it colder sometimes just to cool the room faster. This, I believe adversely affects how well it can cool rooms in very hot heat.

The summer after the above-mentioned heatwave was also a heatwave.

We needed more ACs. Again, I trotted off to Rona and bought two more Arctic Kings. I was so pleased with the first one (for our climate), I bought two more. I’ve had situations during heatwaves where all the stores run out of ACs. I didn’t want that to happen ever again, so I loaded up. I set one up and stored the third as a spare.

That third one came in handy this year. I moved my office to a building without central air. I still can’t believe a large 4-story building doesn’t have central air, but it doesn’t. Out came the Arctic King and now my office is nice and cool.

Is this the best AC on the market? I doubt it just because it doesn’t cool rooms as cold as I’d like sometimes, but for us it does a decent job.

Where to buy an Arctic King AC

I bought it at Rona in Canada.

The Home Depot sometimes carries them as well.

The thing with ACs, is when you need them, the stores run out.