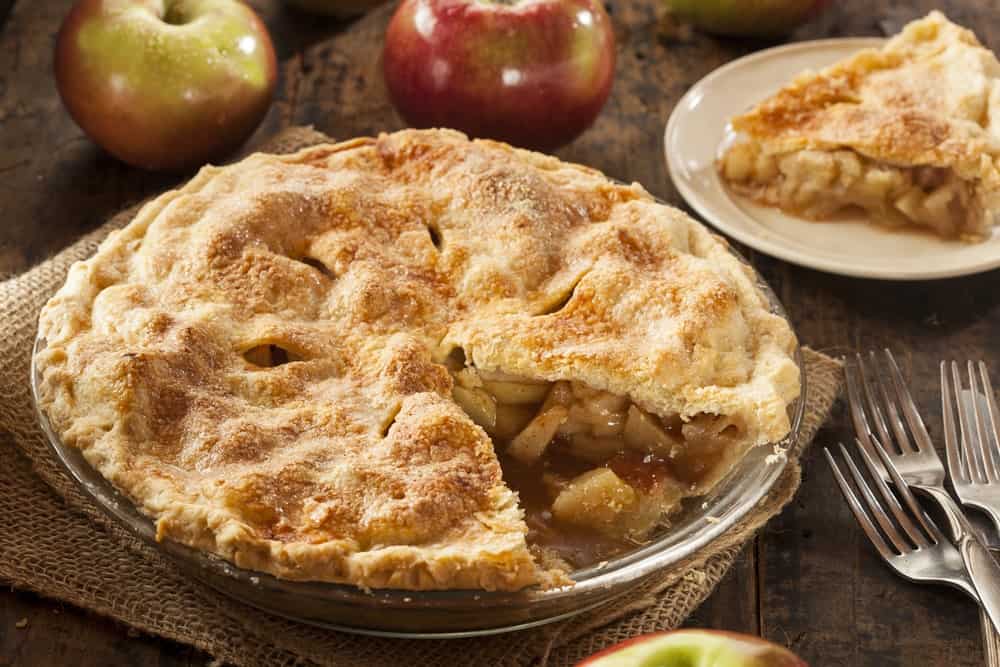 By using our recipe for Apple Pie, you will soon be using the phrase "as easy as pie!" Don't allow creating a pie crust from scratch intimidate you. While pastry making takes a bit of a knack, after you've made a few pies, you'll be glad you learned how!

It’s sad to say, but many are intimidated by the idea of making a pie from scratch, mostly because they believe that creating your own pastry crust is difficult. Of course, making a pie crust does take a bit of a knack, but after you’ve done it a few times, you’ll start to find it getting easier for you. The easiest pie crust to make is a shortening pie crust. 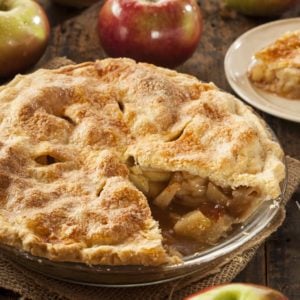 April Freeman
Apple Pie is a dish that pretty much everyone who wants to cook well should be able to prepare. This recipe for Apple Pie is just your basic pie. It includes apples, cinnamon, and a shortening pie crust baked in a pan. Almost everyone likes Apple Pie so why not create this recipe for your next potluck dinner at work or for guests at home?
Print Recipe Pin Recipe Add to Collection Go to Collections
Prep Time 20 mins
Cook Time 1 hr
Cooling Time 30 mins
Total Time 1 hr 50 mins
Course Dessert
Cuisine American
Servings 8 people

Shortening pie crusts are a bit easier to handle because you don’t have to worry about the butter getting too soft in the warmth of your kitchen and making your pie crust sticky and hard to handle while you are rolling it out. If you’ve never made a pie crust before, this is a great one to start with. When you make an apple pie, be sure that you have the right apples on hand. Not just any apple bakes up well in a pie because some varieties simply turn to mush when exposed to heat. Apples like Jonagold, Granny Smith, and Golden Delicious are good pie apples that keep their shape while being baked. We used Ginger Gold apples for our pie, and we added a couple of Granny Smith apples as well to create a more complex flavor in the apple pie filling. If you want to use just one variety that is fine, or you can mix in up to three varieties to kick up the flavor. Have you ever cut into a pie and been disappointed to find that the bottom crust is gooey and undercooked? Soggy bottom crusts often happen when bakers use the wrong pan to make a pie. Those flimsy disposable aluminum foil pans are usually the culprit when you find that your pie has a soggy bottom. Those pie pans are not a good idea for Apple Pie.  If you must use a metal pan, choose the heaviest weight pan that you can find. Cast iron is a great choice. Additionally, ceramic or glass pie pans make wonderful pies that bake all the way through. An added bonus is that a classic glass pie pan can be found at any discount or grocery store. A pie pan doesn’t have to be fancy or expensive to make a great pie! Another common problem for novice pie bakers is that the edges of the crust begin to get overly brown before the rest of the pie is baked. To avoid this, cover the edges of the pie with strips of aluminum foil, folding them around the circumference of the pie. This will shield the pie during the first part of baking. When you get to the last 20 minutes of baking time, remove the foil and continue to let it bake. You can also buy what is called a pie shield, a premade, reusable lightweight aluminum ring that sits on top of the pie to keep the edges from over baking.
Keyword Apple Pie, Dessert, Recipe
Tried this recipe?Let us know how it was!