Including the spicy flavor of cinnamon along with the tang of delicious apple butter, our recipe for Apple Butter Cookies is soft, chewy, and fragrant. These cookies are a perfect fall treat, but they are so delicious that you may want to make them all year long.

Apple butter has been around for centuries. In the Middle Ages, monks in the area once called Limberg (this area is currently in Germany and the Rhineland) grew vast fruit orchards. Often, the fruit was made into cider, but in time, the monks found that they could preserve the goodness of the apples by cooking the fruit down into pulp along with spices and sugar. It wasn’t long before every village in that area had a factory dedicated to the creation of apple butter. German settlers who came to the United States brought their recipes for apple butter with them to Pennsylvania. 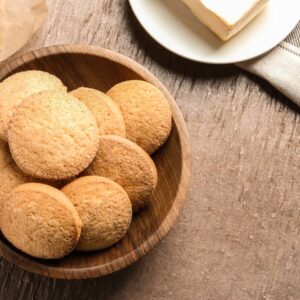 April Freeman
With the spiciness of cinnamon and the sweetness of apples, apple butter is a wonderful spread for toast or biscuits. If you are a big fan of apple butter, this recipe for Apple Butter Cookies is sure to be a favorite. Soft and chewy, with a slight tang from cream of tartar, these cookies are an apple flavored version of a snickerdoodle cookie. While these cookies are good as a fall treat, with the warmth of cinnamon and flavor of apples, there is no reason that you cannot enjoy them any time of year.
Print Recipe Pin Recipe Add to Collection Go to Collections
Prep Time 2 hrs 15 mins
Baking Time 15 mins
Total Time 2 hrs 30 mins
Cuisine American
Servings 24 Cookies

Over the years, apple butter production spread from Pennsylvania all across the United States. In some areas, such as in the American Southeast, making apple butter became a family or even community event because of how labor-intensive it was. Large groups of people came together to pick apples, peel them, seed them, and chop them into pieces. The apple butter was cooked in large copper kettles outdoors over open fires. Large paddles were used for stirring the apple butter, and it cooked for hours before it was put into jars and sealed to be used the rest of the year.  Even now, many communities in the United States celebrate the making of apple butter. These festivals generally take place in the fall at the time of apple harvest. It is not unusual for apple butter to be made on site at these festivals in the open air in the traditional copper kettles so that people can get a picture of how apple butter was made centuries ago. There is no actual butter in apple butter. People use the word butter in this context to refer to the texture of the final product, which is thick and smooth, like a soft butter.  Apple butter differs from applesauce in that it is cooked much longer and with richer, more fragrant spices like cinnamon, cloves, and other spices. The fruit pulp is cooked for a long time until the sugar from the apples caramelizes, turning the spread a deep, dark brown. Sometimes, if the apples are very sweet, the apple butter maker will stir in a quantity of vinegar or lemon juice to add a bit of interesting tang to the spread. Because the sugar is so concentrated, the apple butter can be stored for a much longer amount of time than typical applesauce.  Generally, soft, sweet apples are used in the making of apple butter. Apples that break down easily when heated like McIntosh and Cortland are commonly used for apple butter.
Keyword Apple Butter Cookies, Recipe, Snack