Leavened with beaten egg whites rather than baking powder, an angel food cake sounds like a complicated cake to make. However, by carefully following the steps in our recipe and taking your time, you can create this perfect, light, fluffy summer dessert, Angel Food Cake. 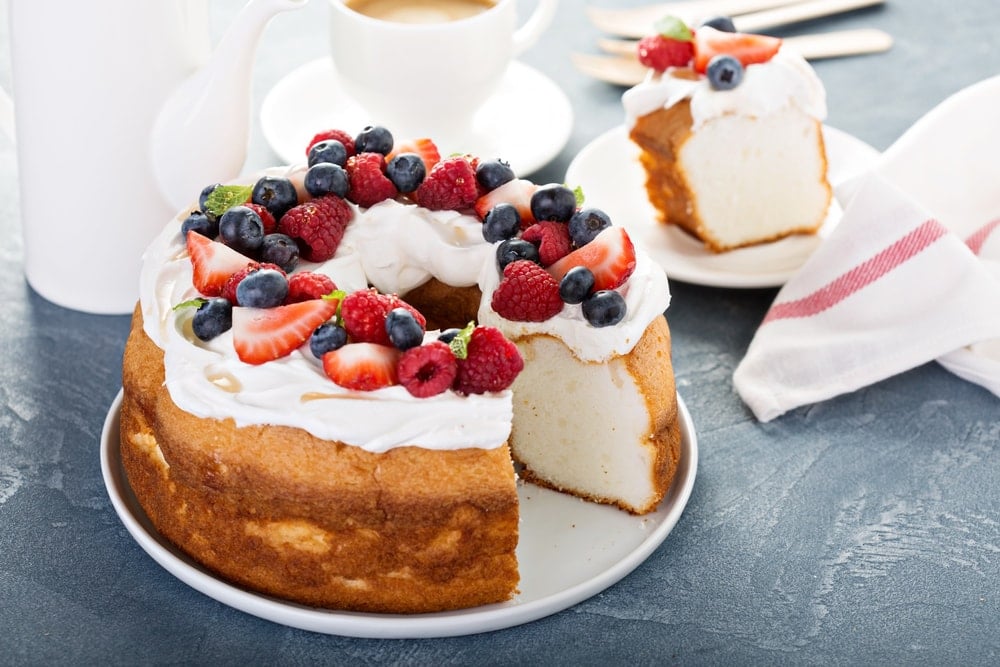 Many people believe that angel food cake is complicated to make. They may wrongly think this because rather than using the chemical magic of baking soda and baking powder to rise, an angel food cake uses whipped egg whites to incorporate lots of air into the batter. Using beaten egg whites isn’t hard, but it does take a little time. The first few times that you make this cake, allow for plenty of time so that you can get the steps right. Baking this cake isn’t difficult, but you do need to pay attention to the details. 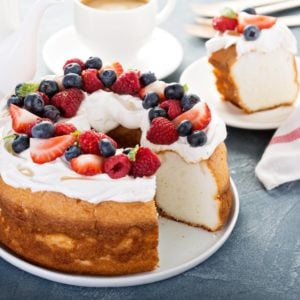 Before you get started, you will have to separate the egg yolks from the egg whites. You can buy a nifty gadget at a discount store to make this a little easier, although professional chefs generally just use the eggshell to separate them. Don’t allow a single drop of egg yolk to contaminate your egg whites. Any little bit of fat may interfere with the ability of your egg whites to trap bubbles. After you’ve separated the egg whites, whip them with an electric mixer on high speed. You can use a hand mixer, (although using a whisk attachment on it will work best) but a stand mixer is ideal for whipping egg whites. You can let the mixer run while you’re sifting the flour. Beat the egg whites to a soft peak stage. This means that when you lift the beaters out of the mixture, they create a little peak that curls downward. Don’t overbeat the egg whites. Also, using cream of tartar and lemon juice as you beat the egg whites will help them be more stable and less likely to collapse when you add the additional ingredients. And when you do add the rest of the ingredients, be sure that you gently fold them into the egg white fluff using a rubber spatula. Be gentle to keep as much volume as possible in the egg whites. This cake is baked in a tube pan. A tube pan, with a flat bottom and straight sides, is not the same as a Bundt pan. A Bundt pan won’t work for this recipe, because the cake will stick in all of the crevices of the Bundt pan. Also, make sure that your pan is scrupulously clean because any grease at all will keep the cake from staying fluffy. When the cake is finished baking, you will need to turn it upside down to cool. Some angel food cake pans have little feet on the pan to help you do this. If your pan doesn’t have the feet, you can place a kitchen funnel on your counter and put the hole of the pan over the spout of the funnel to keep it elevated as you allow it to cool upside down. If you don’t cool the cake upside down, you run the risk of the cake collapsing on itself as it cools off.
Keyword Angel Food Cake, Dessert, Recipe